Indian cricketer Hardik Pandya plays a shot against Australia at the Holkar Stadium in Indore on September 24, 2017

Hardik Pandya hit an aggressive half-century to lead India to a series-clinching five-wicket win over Australia in the third one-day international in Indore on Sunday.

Pandya’s 72-ball 78 and his crucial fifth-wicket stand with Manish Pandey, who remained unbeaten on 36, helped the hosts chase down their 294-run target with 13 balls to spare.

Openers Rohit Sharma and Ajinkya Rahane put together a 139-run stand to lay a solid foundation for the team to take an unassailable 3-0 lead in the five-match series.

But it was the Indian bowlers who set up the comfortable victory after opener Aaron Finch’s blazing century, restricting the visitors to 293-6 at the batting-friendly Holkar Stadium.

In reply, Sharma, who hit 71, and Rahane, who made 70, combined the right dose of caution and aggression to give the Australian bowlers a hard time.

Sharma hit a huge six off Kane Richardson early in the innings that sailed out of the ground to signal his intent. He registered his 33rd ODI fifty with another six off Ashton Agar.

His 62-ball-knock was laced with 6 fours and 4 sixes before he top-edged a delivery from Nathan Coulter-Nile and substitute fielder Hilton Cartwright made no mistake at deep mid-wicket.

Rahane soon followed his partner back to the pavilion after Pat Cummins, who was brought back for his second spell, trapped the batsman lbw as Australia tried to check a rampaging India.

Kohli tried to take charge during his 56-run stand with Pandya but lost his wicket to left-arm spinner Ashton Agar. 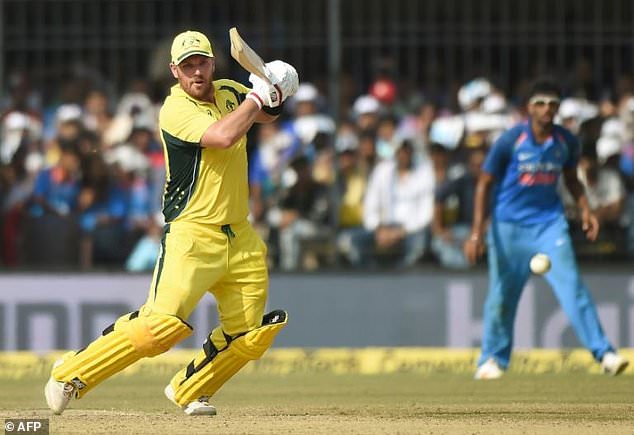 Australia batsman Aaron Finch plays a shot during the third one-day international against India at the Holkar Stadium in Indore on September 24, 2017

Richardson got Kedar Jadhav caught behind for two as India suddenly found themselves in trouble at 206-4.

The 23-year-old Pandya, who survived a dropped chance by skipper Steve Smith off Agar on 41, then showed maturity as he and Pandey took control of the situation.

Fast bowler Jasprit Bumrah and left-arm wrist spinner Kuldeep Yadav claimed two wickets each to help India fightback a strong start from the Aussies, who eyed 300-plus at one stage.

The fourth ODI is scheduled for Thursday in Bangalore.