Papa John’s has not changed its recipe and is ignoring claims from its ousted founder that the brand has reduced quality, the company’s CEO says.

‘Nothing has changed,’ chief executive officer Rob Lynch said in a Wednesday interview with CNBC.

Lynch’s comment comes a week after John Schnatter, his controversial predecessor, declared that the pies ‘just doesn’t taste as good.’

The new CEO asserted that the company is not focused on Schnatter’s comments.

‘Mr. Schnatter is entitled to his opinion,’ Lynch stated. ‘We’re focused on doing the things that are gonna move the business forward.’

Papa John’s founder John Schnatter revealed in an interview last week that he has eaten 40 pizzas in the last 30 days and they do not taste as good as they did when he was in charge before being ousted after a string of scandals.

Schnatter resigned from the company entirely last year after a series of incidents which began in 2017 when he criticized the NFL for not stopping national anthem kneeling protests, which he attributed a decline in pizza sales to.

A year later he was heard on a conference call using the N-word.  He stepped down as CEO in 2017, then as chairman in 2018 and has since been replaced.

In an interview with WDRB that emerged last Tuesday, he claimed he was pushed out as part of a strategic coup from his successors and that a ‘day of reckoning’ will come.

He claimed they ‘used the black community and race as a way to steal the company’ and that he is not racist and never has been. 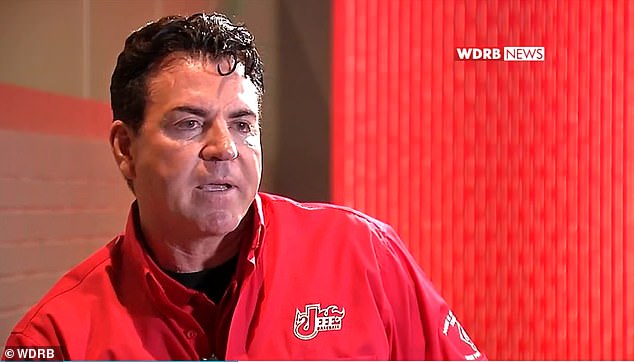 John Schnatter, the founder of Papa John’s, speaking in an interview which aired last Tuesday about his departure from the company

The interview was mocked online with many calling Schnatter, 57, ‘insane’ and some saying he had started producing ‘grease sweats’ after eating so many pizzas.

Schnatter claimed in the interview that none of the people in charge now have the appropriate experience to run the company, and that the food is suffering as a result.

‘The way they’re making the pizza is just not fundamental to what makes a Papa John’s pizza,’ he said.

He claimed Rob Lynch, who replaced him as CEO, is unqualified, saying: ‘He has never been a CEO.

‘He has no pizza experience. He has never been in the pizza category. He doesn’t really know quality. Probably most important, he doesn’t have a passion for people.’

Schnatter also alleged that he was the victim of set-up and that his replacements ‘fabricated’ his racist comments to push him out of the company, despite admitting to making the racist comment last year.

The beginning of the end for Schnatter was in 2017 when he criticized the NFL for not stopping players from taking a knee as part of a protest against police brutality.

He complained to shareholders about it and suggested it was part of the reason Papa John’s had seen a downturn in sales, because of the pizza chain’s deal with the NFL. 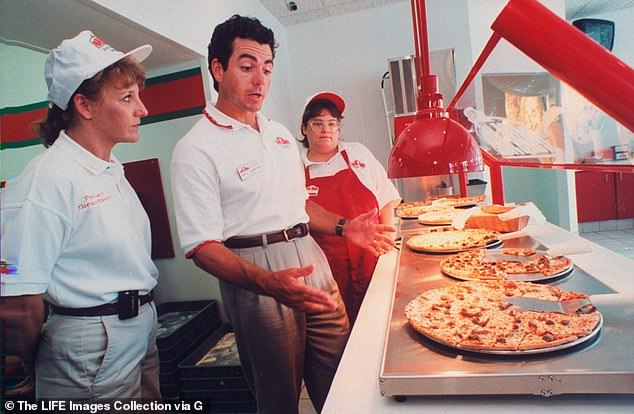 Schnatter founded Papa John’s in Indiana in 1984. He is pictured in an undated image inside one of the restaurants 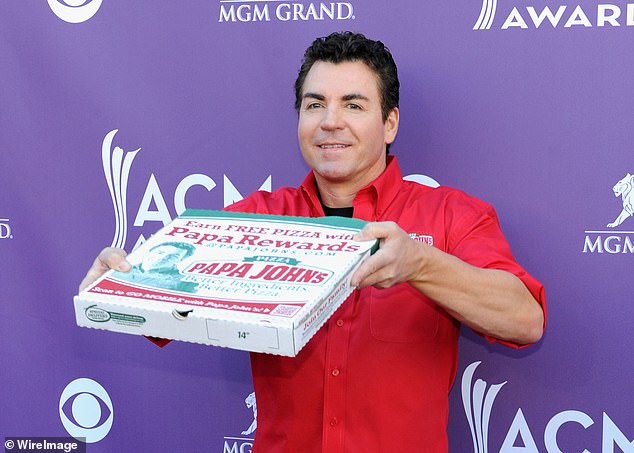 Schnatter in 2012. He complained in his interview that unlike him, the new people in charge ‘don’t have pizza experience’

In May 2018, during a conference call with a marketing company about how he would handle the topic of racism, he was heard using the N-word.

On the call, he reportedly complained that ‘Colonel Sanders called blacks n*****s’ but never faces any public backlash for it.

The call horrified people listening to it, the marketing company terminated its contract with Papa John’s and Schnatter resigned as chairman, issuing an apology which confirmed what he had said.

Now, however, he says it was ‘fabricated’.

‘They fabricated it. Shame on them. This is all a farce.

‘Nothing sells like the truth, and the truth, sooner or later, all comes out.

‘The day of reckoning will come. The record will be straight.’

He named Steve Ritchie, the former president of Papa John’s who is now a franchisee, and Olivia Kirtley, who is on the board of directors, as among those who ousted him.

‘I just didn’t know it would happen from people on the inside doing this. I thought it would come from the outside,’ he said. 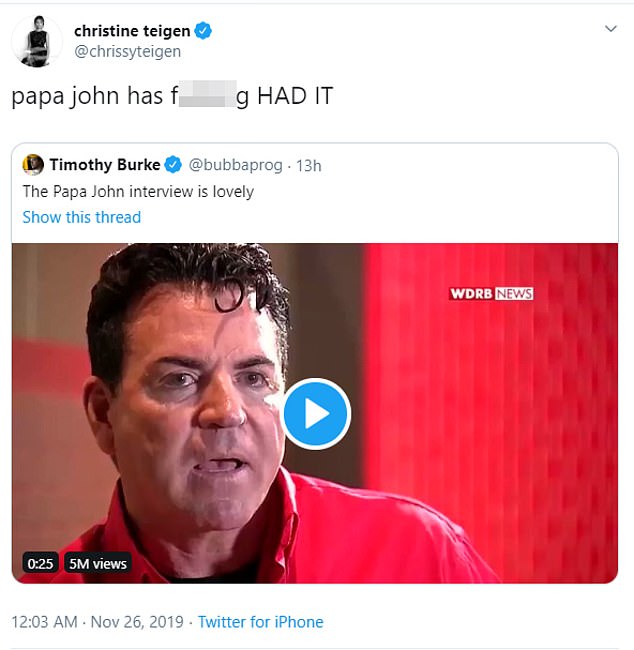 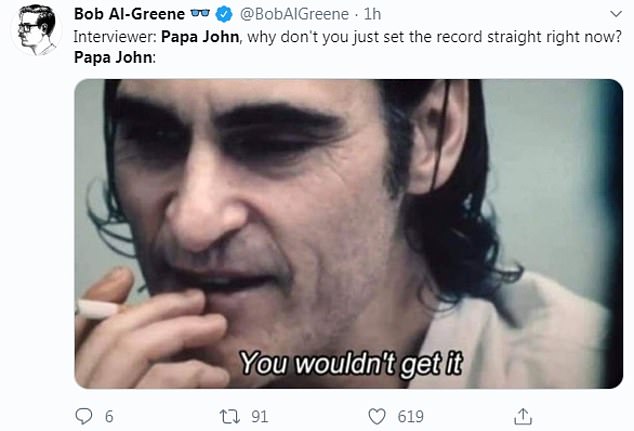 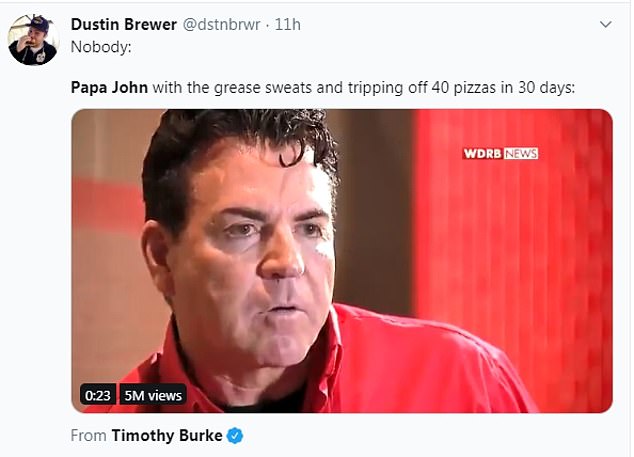 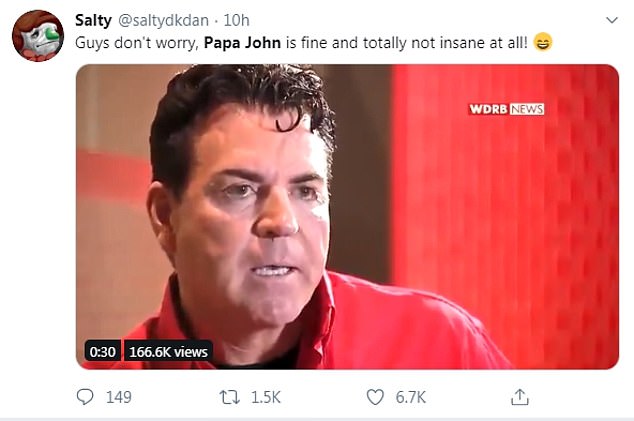 ‘Steve Ritchie, Olivia Kirtley, the board of directors all used the black community and race as a way to steal the company.

December 2017: Schnatter resigns as CEO and is replaced by Steve Ritchie

May 2018: During a call with a marketing agency about how to handle the topic of racism and racist groups, Schnatter said: ‘Colonel called blacks n*****s’.

The marketing agency ended its contract with the company.

‘Olivia Kirtley and Mark Shapiro [another director] should be in jail. It’s that bad.

‘What they’ve done is just wrong, and they’ve hurt a lot of people,’ he continued.

Schnatter claimed he still spoke to high level executives who were ‘miserable’.

‘They’ve hurt people that wake up every day and make this company great.

‘I mean, it’s a miserable place over there … They’re losing all of their good people.

‘The key to this business is good people,’ he said.

Schnatter has long argued that he was complaining about racism when he used the N-word on the call.

He said it enraged him after growing up in Indiana where ‘African Americans were dragged from trucks until they died.’

He is still the largest single shareholder in the company with more than nine million shares worth an estimated $700million. 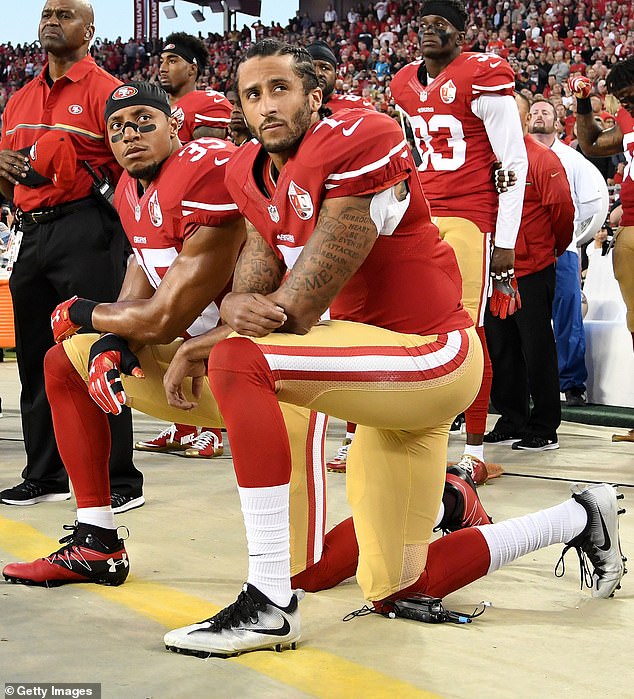 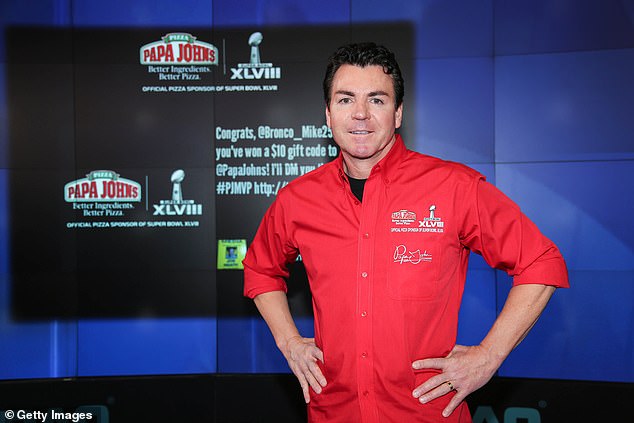 Papa John’s sponsored the NFL and was involved in the Super Bowl but after Schnatter’s comments, the league cut ties with his company