A heartfelt note praising paramedics has been left on an ambulance windscreen urging the emergency services to ‘block driveways’ if they have to.

The letter, which was not signed, was written on lined paper and described ambulance workers as ‘unsung heroes’.

It comes just days after Kirsty Sharman, 26, was fined £285 for leaving an abusive note on an emergency vehicles after she found it parked outside her home in Stoke-on-Trent.

But in an apparent move to reassure the ambulance service their work was appreciated, the latest note left in Morecambe Bay, near the Lake District, told paramedics to ‘park wherever you like!’

It said: ‘To the paramedics/crew driving this ambulance… Please DO block our street and parking spaces if needed! Park it wherever you like! ‘You selflessly, bravely, and passionately save lives day in, day out.

‘Without people like you, we would not know what to do! So **THANK YOU!** Really, thank you.

‘You, along with the other emergency services, truly are our unsung heroes! Stay safe, well fed, and watered and warm.

‘I hope more people realise how invaluable the ambulance service is! Sincerely, a thankful member of the public.’

Sharman followed up a court appearance with a string of tweets criticising the NHS, although her account no longer exists, suggesting it has been deleted or deactivated.

Last week she scrawled the message on a scrap of paper and tucked it under the back windscreen wiper as paramedics attended a 999 call on Sunday.

Her note read: ‘If this van is for anyone but No. 14 then you have no right to park here. I couldn’t give a s*** if the whole street collapses. Now move your van from outside my house.’

Paramedic mentor Katie Tudor posted a picture of the note on Twitter, copying in the police. 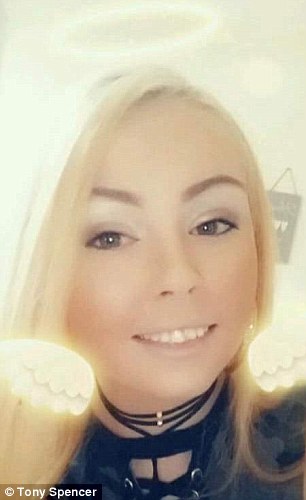 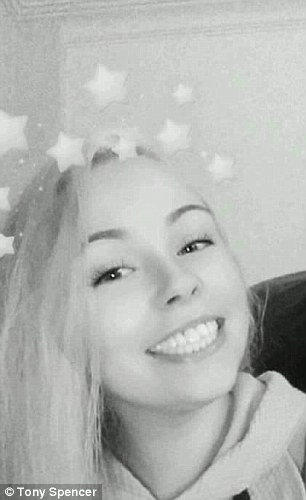 Ms Sharman, a mother of two, was charged after a picture of the angry note was posted on Twitter by ambulance staff 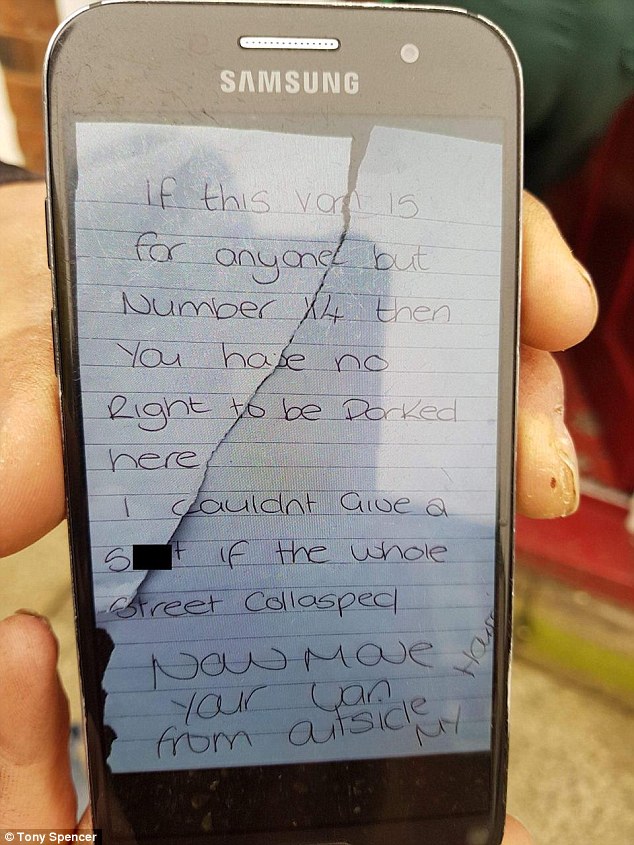 She was fined £120, ordered to pay £135 costs and pay a £30 victim’s surcharge. A charge of breaching a restraining order was dropped.

Chair of the bench Christopher Rushton said: ‘Miss Sharman, this was an absolutely despicable incident directed at an ambulance crew providing a public service to a sick person.’

‘She doesn’t seek to minimise or make excuses for her behaviour on the day in question, save to say she is sorry. She has accepted she did write that note.

‘(She used) abusive language towards the staff when they were simply trying to do their job.’ 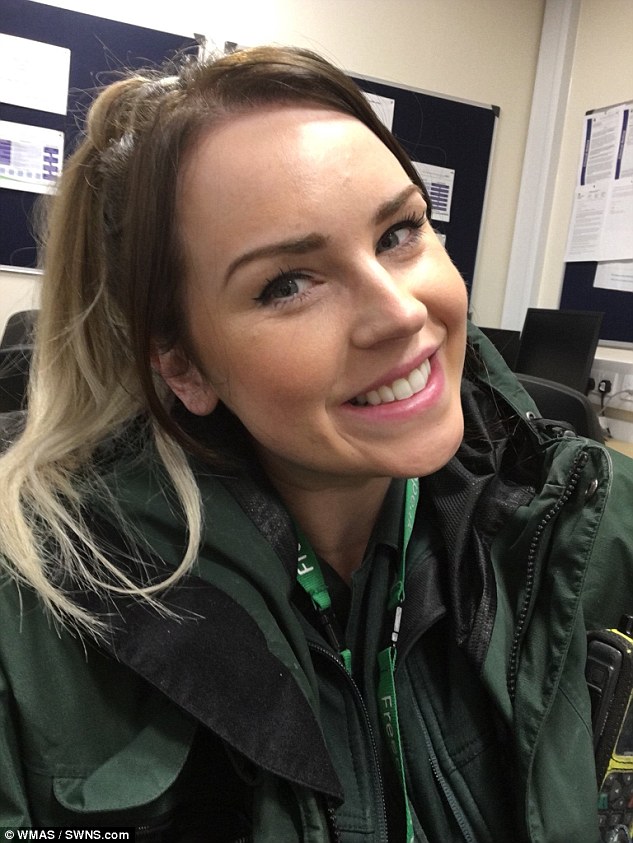 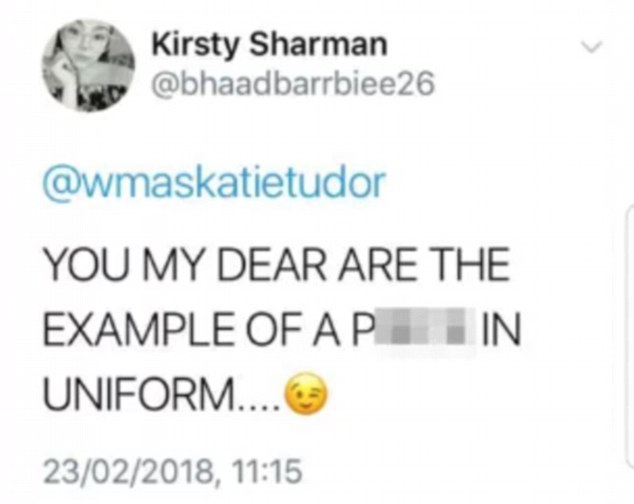 In her latest Twitter outburst, 26-year-old Sharman posted a tweet apparently aimed at Miss Tudor calling her ‘a p***k in a uniform’

But just days later she was embroiled in more controversy when she slammed the NHS in a series of tweets.

Under her twitter handle of @bhaadbarrbie26, the 26-year-old wrote: ‘Got to admit though the NHS service is w*** though.’

She later engaged in arguments with other Twitter users and even appeared to brand Miss Tudor a ‘p**** in uniform’.

On Thursday, Sharman revealed Facebook ‘decided to put me on a three day ban’, and attached an image of herself raising middle finger.

The ‘nightmare’ neighbour, 26, of Stoke-on-Trent, wrote: ‘Ya’ll going on like I hate the NHS ambulance service.

‘Nahhh, I just hate the people in my street… it’s that simple.’

She also tweeted: ‘Sat comfortably in my home while the press sit outside trying to catch a pic. #kirstysharman and proud to be me. #noshame.’ 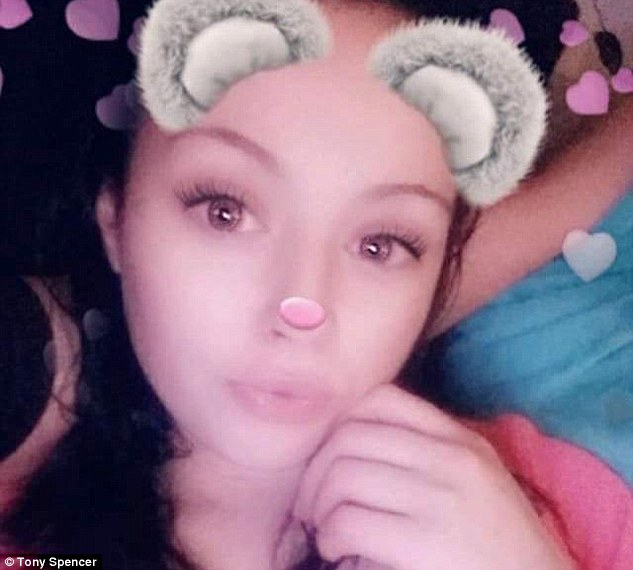 Appearing in the court dock today at Newcastle-under-Lyme, Sharman, through her solicitor Hayley Keegan, offered her ‘most sincere apologies to the ambulance staff’

Sharman added: ‘You cretins think I need “air time” to apologise. #SorryNotSorry You lot know nothing!’

The account began posting tweets on Tuesday – the same day Sharman was stung with the £120 after pleading guilty to using threatening words or behaviour.

Her note was slammed across social media – leading Sharman to declare herself ‘the most hated woman in the world right now’.

The ambulance on which she left the note was responding to her neighbour, 66-year-old Brian Heath whose wife, Christine, 68, had trouble breathing.

Mr Heath said he was ‘shocked’ that Sharman had ‘got off again’ following a spate of anti-social behaviour incidents.

Sharman, an unemployed mother-of-two, had fallen out with her family, according to a relative who described her as a ‘menace’ who should be in prison.

Mr Heath, who served in the Army, blasted the sentence handed to Sharman at the court in Newcastle-under-Lyme, saying he and his wife were at their ‘wits’ end’.