Australian paramedic and mum-of-two, Nikki, shared a disturbing video showing just how quickly tablets can dissolve in a child’s mouth

Leaving dishwasher tablets where children can reach them can lead to tragedy in just seconds, child safety experts say.

Australian paramedic and mum-of-two, Nikki, shared a disturbing video showing just how quickly the tablets can dissolve in a child’s mouth.

The Tiny Hearts Education founder said dishwashing tablets may burst in a bub’s mouth in as little as ten seconds, causing severe injuries.

The busy mum filmed an experiment where she checked how quickly each protective covering dissolved after being exposed to a tiny spray of water.

The back came off the first in a matter of seconds, shocking Nikki.

The second a liquid tablet, popped after Nikki applied ‘a little bit of pressure’. 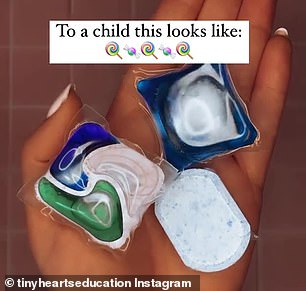 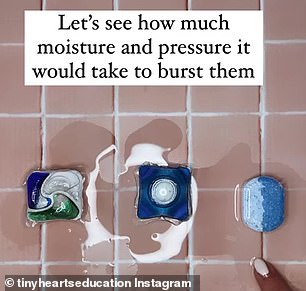 The tablets, which look like lollies to small children, take seconds to pop when exposed to moisture

The third required some scraping but was soon open like the others.

‘Bottom line, store out of reach of tiny hands,’ she said.

The brightly coloured dishwashing tablets can look like lollies to small children, other explained.

The shocking video appeared popular with the parents who follow Nikki online, with more than 108k people dropping by to watch the life-saving clip.

Some mums shared their own horror stories – admitting they never thought their children would try to eat the tablets.

One woman said she had ignored a similar video of Nikki’s last year, which called for parents to put the dangerous cleaners up high or in a locked cupboard.

‘The NEXT day I found her (18 months) at the cupboard and tablets everywhere,’ she wrote.

One of the tablets had been nibbled on but because it was quite hard the toddler hadn’t had time to swallow much.

‘I dread to think what could have happened if she’d pierced a liquid one. Called poisons hotline and thankfully all was ok but it’s a lesson as to how quickly these adventurous little ones can break into things even when you think they are safe,’ one mum said. 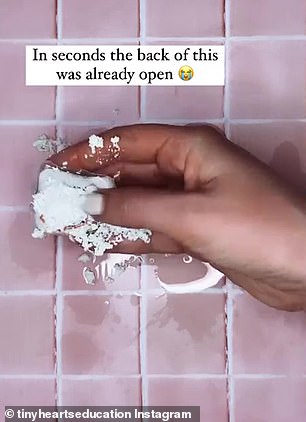 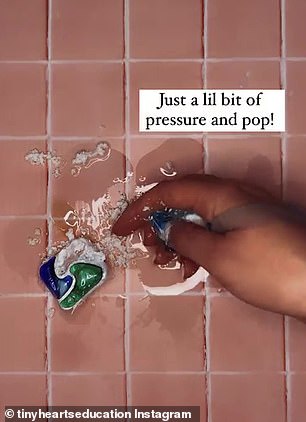 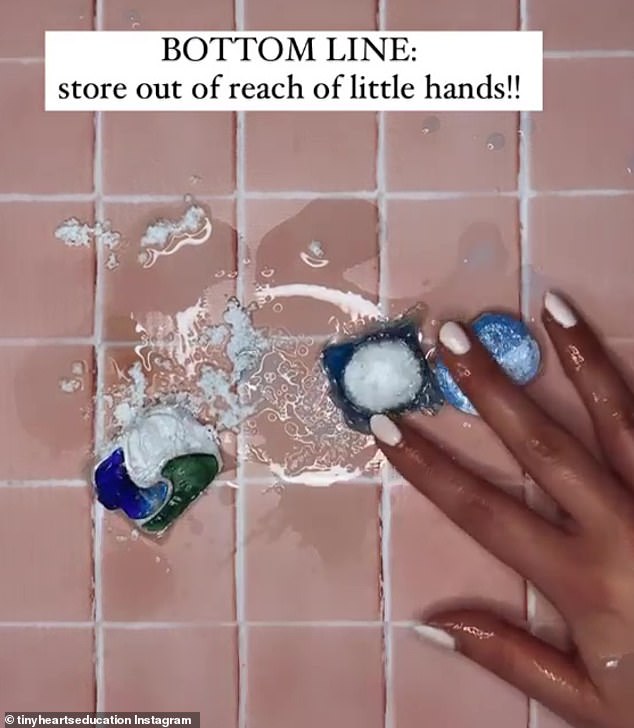 Another mum revealed her son ended up in emergency with alkaline burns to his eye because she didn’t realise how dangerous the tablets were.

‘My son used to put them in the dishwasher with supervision from about 14months he loved to help,’ she said.

‘I always made sure he knew not to put them in his mouth but it never occurred to me it would burst so easily into his eye.’

If your child does accidentally swallow a dishwashing tablet or other household poisons call the poisons hotline for assistance on 131 126 or go to your nearest emergency department.