This is the shocking moment a young holiday couple hit overhead electricity power cables when their ‘Batman’ parascending adventure went horribly wrong at a Russian beach.

The 21-year-old woman suffered electric shocks and severe scratches in the Black Sea nightmare where the couple were violently tossed around when their kite became entangled in live electricity wires.

Her boyfriend is fighting for his life after sustaining serious multiple fractures and electric shocks.

The couple hit the beach hard as onlookers ran to their aid after the ordeal that saw them narrowly avoid beach-front buildings on their way to hitting the sand.

The man offering £52 daredevil beach parascending joyrides – who calls himself ‘Alex Batman’ – fled soon after the accident, according to Russian reports.

He is being hunted by police.

Pulled by a speedboat, the couple hit the power cables after they flew over beach and land rather than the sea. 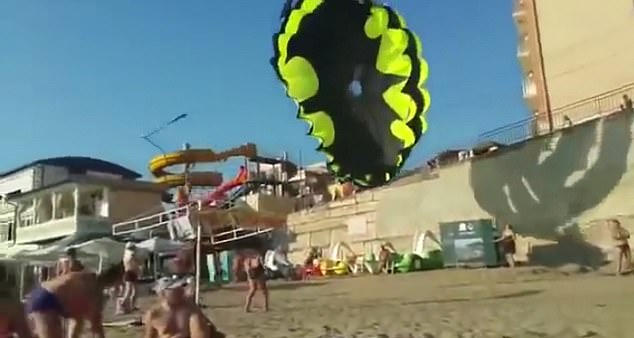 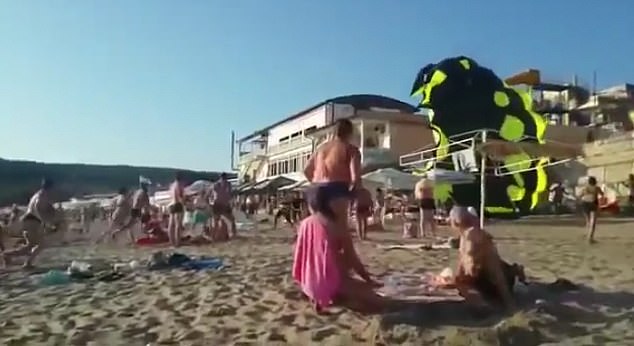 A sunbather at Dzhubga resort filmed the tragic couple as they fight the get free of the high voltage cables.

The boatman pulled the rope to yank them free.

After they are wrenched clear, they spin upwards uncontrollably in the air still attached to the harnesses.

The man is seen dangling as they crash land on the beach smashing into beach umbrellas. 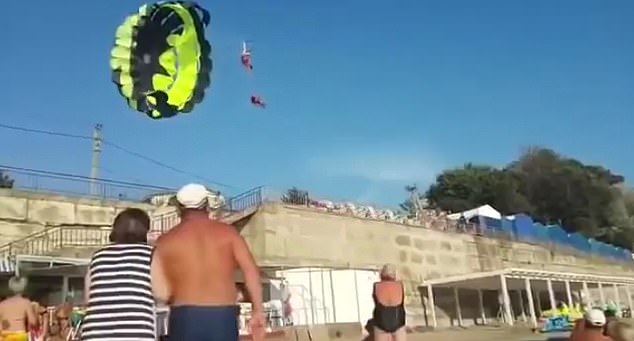 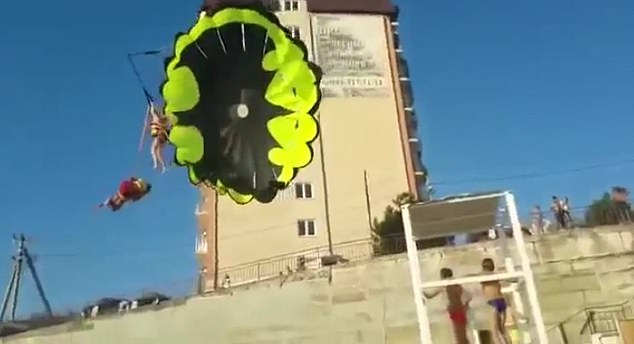 Sunbathers rush to the scene to help the couple.

They were taken to Tuapse District hospital in Novomikhailovsky settlement.

Onshore winds led 44 year old boat owner ‘Alex Batman’ to offer clients the chance to overfly the beach – soaring as high as a nine storey building on the the seafront.

But this meant they overflew not only hundreds of sunbathers but also the deadly power cables.

It is believed the wind dropped unexpectedly and they lost height. 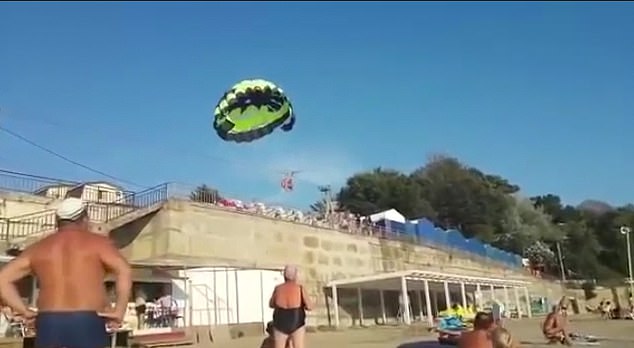 Locals claimed the man in charge of the boat was ‘drunk’ at the time of the accident.

Police are looking for the man and have not confirmed that he was intoxicated in charge of the boat.

The injured man and woman have not been identified.

They were tourists from Oryol region in central Russia.

A criminal case has been launched into the incident.