A headteacher has sparked a fierce debate after telling the parents of children who missed out on a school trip to Wembley that ‘disappointment is a fact of life’.

Sixteen pupils from Alice Ingham Primary school in Rochdale are going to London tomorrow to watch their home town club take on Tottenham Hotspur in an FA Cup fifth round replay.

It is only the second time the side have played at Wembley in the club’s 111-year history.

But yesterday dozens more children, some thought to be as young as seven, who applied to go to the match were told they’d missed out on a place.

And in a letter to parents sent home on Monday night, widely shared on Facebook, executive headteacher Monica Walczak wrote it was an ‘ideal opportunity’ to help those children ‘face disappointment and build resilience’.

The letter has split opinion on social media, with some parents saying the kids are too young to be taught such a lesson.

But others have backed the school and accused parents of being over-protective.

Mrs Walczak wrote: ‘The positive response to the visit is beyond what we imagined.

‘Given the disappointment that this has brought to the children it would have been very easy to have made the decision not to consider this trip.

‘However part of our job as educators, both teachers and parents, is to help our children face disappointment and build resilience.

‘This project has been an ideal opportunity for that and I hope that the children who are disappointed tonight will be all the stronger for this in the future. 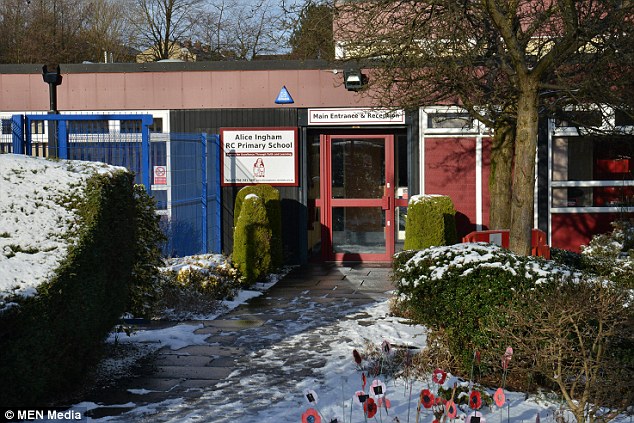 The letter has split opinion on social media, with some parents saying the kids are too young to be taught such a lesson. Pictured: File photo of the Alice Ingham R C Primary School

‘In KS2 (Key Stage Two) it is a hard lesson, but as adults know all too well, disappointment is a fact of life.’

Sarah Price has nine-year-old twin boys at Alice Ingham, one of whom wanted to go to Wembley.

She said: ‘The way it’s been handled is appalling and the wording of the letter home, saying “disappointment is a fact of life”, was terrible. The children are not mature enough to understand.’

Rebecca Cooper, whose 11-year-old son attends Alice Ingham, said: ‘The way it’s been handled is ruthless. It’s alright saying disappointment is a fact of life’ but these kids are too young for that.’