Parents have splashed out tens of millions of pounds extra on private tuition – with some companies reporting a 400 per cent increase in lessons during lockdown.

Families struggling with home lessons have turned to online tutors after school closures have left millions of children out of the classroom. Private tuition typically costs between £20 and £100 an hour and the industry is worth an estimated £6.5 billion per year.

Last week, Ministers announced a £1billion ‘catch-up’ fund to help schools provide both group and one-to-one help for pupils. Headteachers will be able to use the money to pay for tuition after school hours or over the summer months.

However, many families have already enlisted private help and the number of those applying to become tutors has also soared.

Chris Lenton, secretary of the Tutors’ Association – which represents about 30,000 professionals – said: ‘Demand has increased for a number of reasons.

‘Parents have struggled with home schooling and can be juggling work at the same time. They can see children are falling behind.’

Four companies helped out with a pilot for the new Government scheme – including MyTutor, which has 15,000 professionals on their books.

Chief executive Bertie Hubbard said 73 per cent of parents the firm surveyed were more aware of gaps in their child’s learning. ‘We have seen a marked pick-up, four times the volume, and it’s accelerated in recent weeks,’ he said.

‘We’ve seen a real surge in tutors applying as well. We’ve had 10,000 apply since lockdown started, around four times as much. Online can make things very cost-effective and we’ve seen a lot of new people coming to us for lessons.’

A 2018 survey by the Sutton Trust education charity found more than 350,000 secondary age children had received private tuition that year, twice the number compared to a decade earlier. 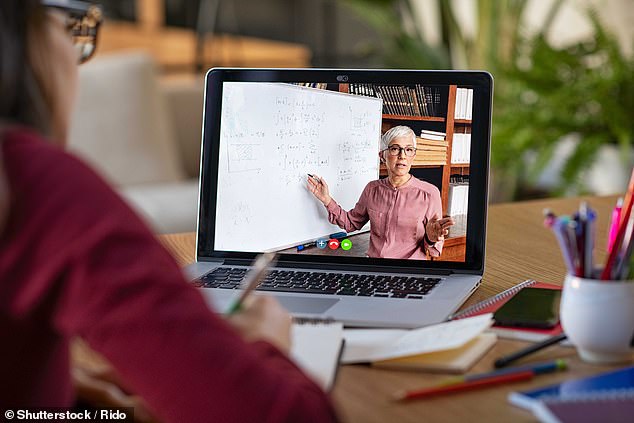 Last year a survey found 27 per cent of pupils aged between 11 and 16 had a private tutor, with the figure rising to 41 per cent in London.

The cancellation of GCSEs and A-levels this year has seen the demand for extra help drop in some quarters, however. Joe Hytner of Titanium Tutors, which has 20,000 professionals on its books, said it had been a ‘big issue for the industry’. He added: ‘Other agencies have picked up more business.

‘But the number of parents who can afford tutors hasn’t necessarily increased during what is also an economic crisis.

‘We’ve managed to muddle through but it’s been challenging.’

Emily Jack, founder of Kings Tutors, said: ‘Our whole business has moved online, whereas it used to be 30 per cent. We’re getting enquiries from anyone and everybody, that’s not normally the case.’