Paris Hilton ensured all eyes were on her as she attended Vas J Morgan and Michael Braun’s Halloween party in Los Angeles.

The reality star, 40, looked incredible as she dressed as a modern day Cinderella in a bue mini dress with a frilled hemline.

Kate Beckinsale was another famous face at the bash and turned heads in a skintight latex Pope costume. 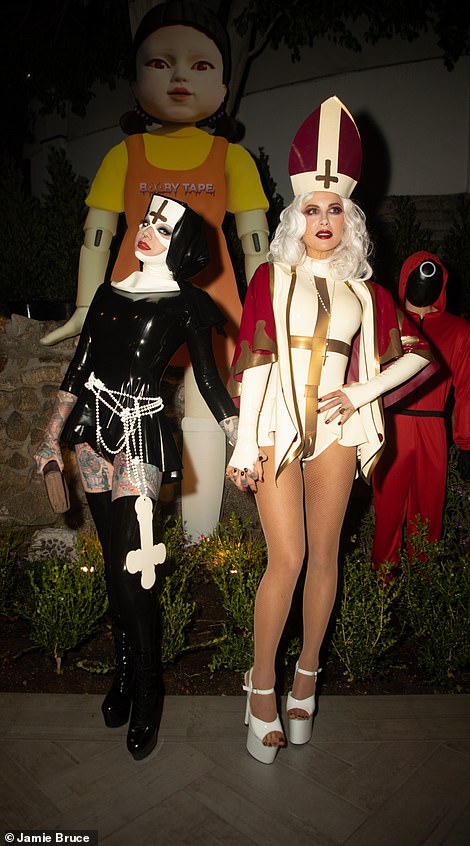 Paris’ costume also featured light blue sleeves while she added height to her frame with a pair of heels.

Styling her platinum locks into loose waves, she completed her look for the event with a silver tiara.

Kate donned a latex leotard which she paired with a red and white mitre with an upside down cross.

The actress also sported a pair of white heels as she posed next to her friend who wore a latex nun costume. 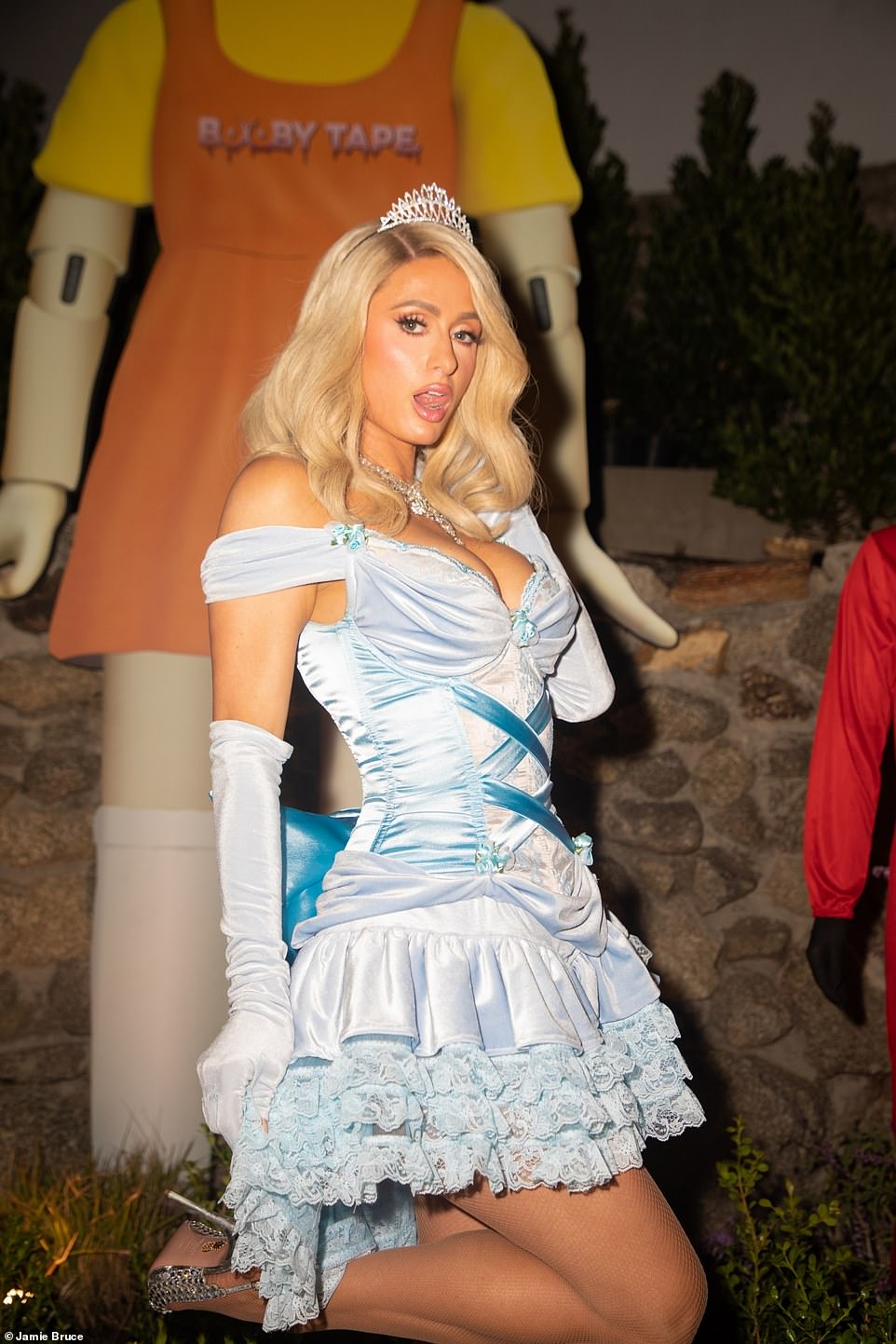 Pose: The reality star, 40, looked incredible as she dressed as a modern day Cinderella in a bue mini dress with a frilled hemline 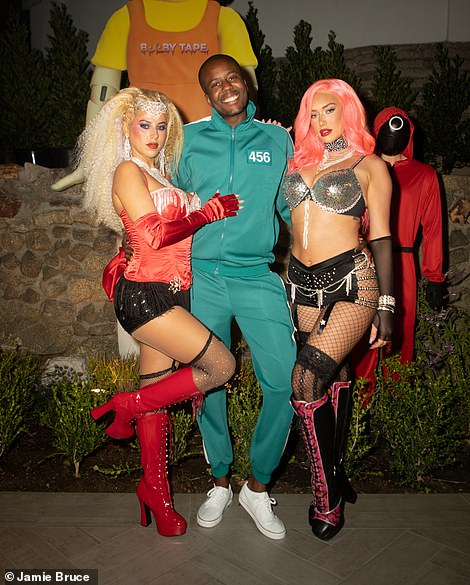 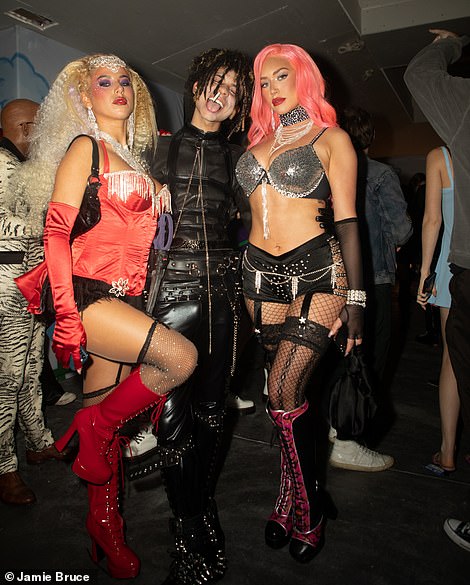 Stunning: Anastasia ‘Stassie’ Karanikolaou (right) caught the eye of onlookers as she transformed into Pink’s Lady Marmalade (pictured with Vas and Victoria Villarroel) 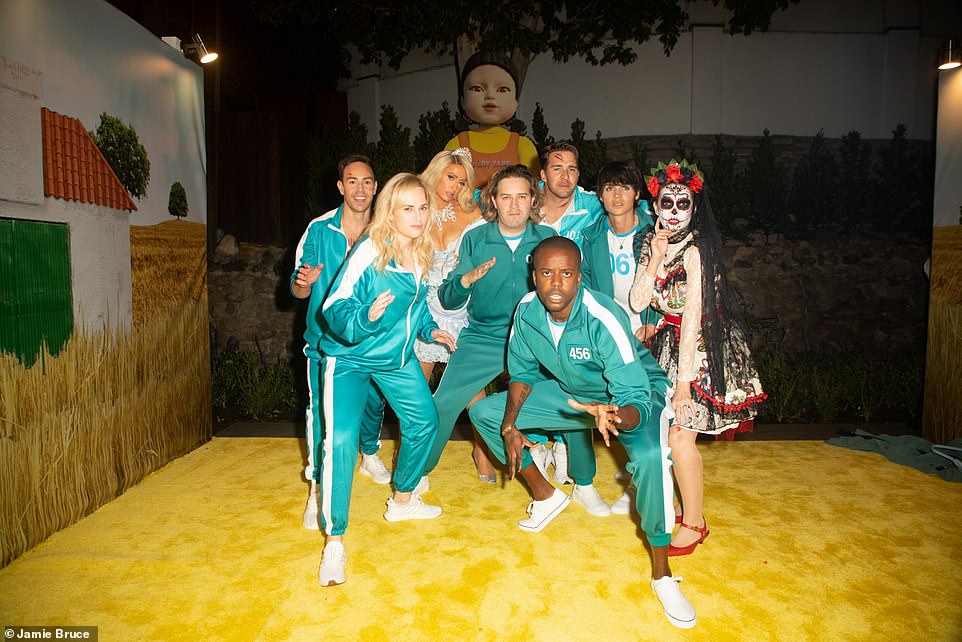 Emma Roberts donned a pink and white clown costume which she paired with a matching hat and bright red ankle boots.

The sets from Squid Game were recreated by the Australian based phenomenon Booby Tape.

Anastasia ‘Stassie’ Karanikolaou caught the eye of onlookers as she transformed into Pink’s Lady Marmalade costumer for the 2001 Moulin Rouge hit. 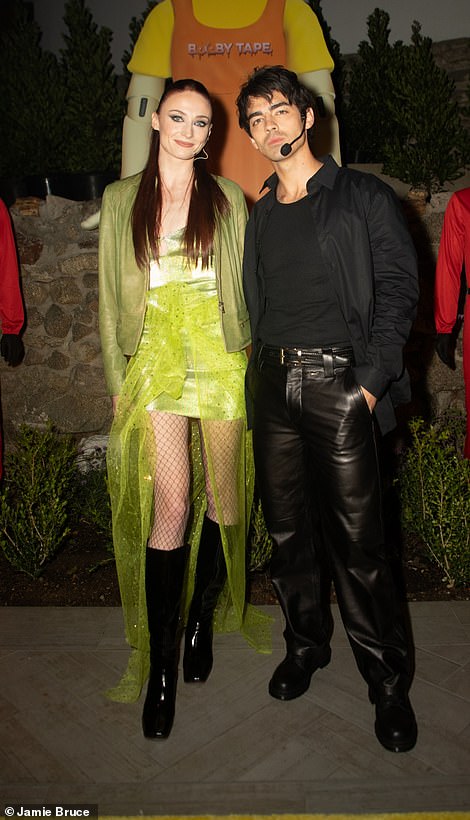 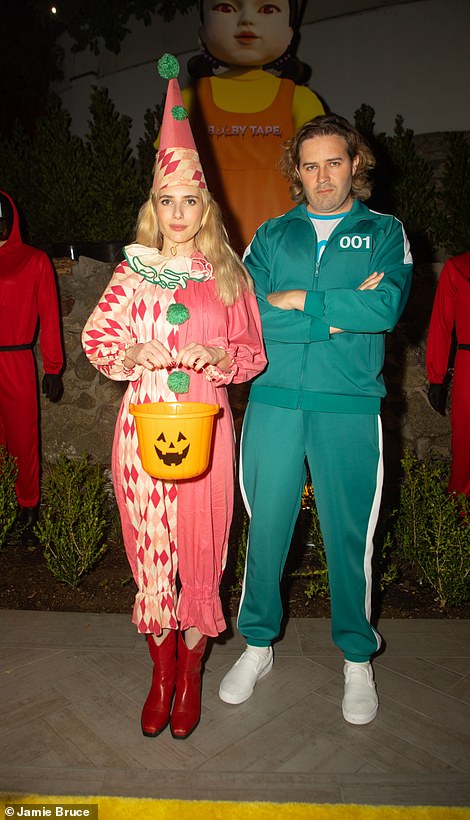 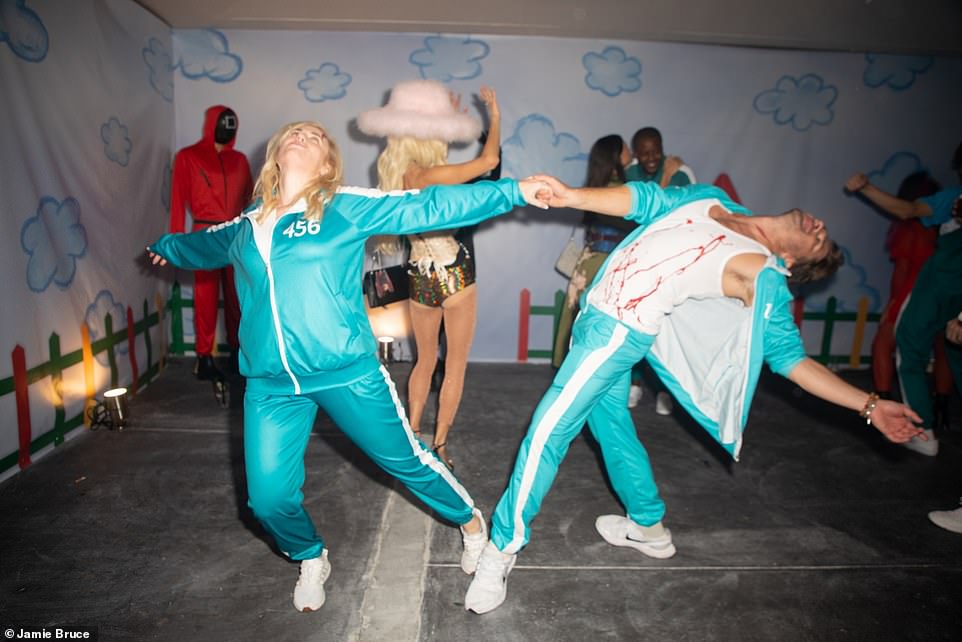 Fun: Pitch Perfect star Rebel struck a dramatic pose with her pal as she cut loose at the bash

The model also sported a silver statement chain necklace and a paired the racy look with black cut-out hot pants.

Olivia Rodrigo looked incredible in a teal gown with a platinum blonde wig as she posed next to Paula Abdul who was dressed as Wilma Flintstone.

Joe Jonas attended the bash with his wife Sophie Turner and sported an all black outfit with a fake microphone. 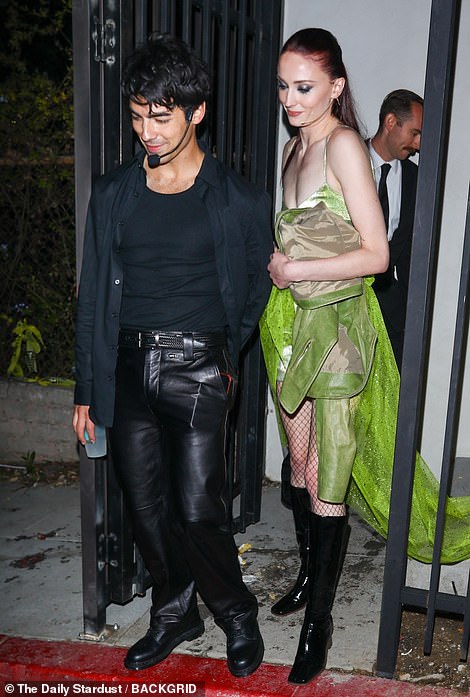 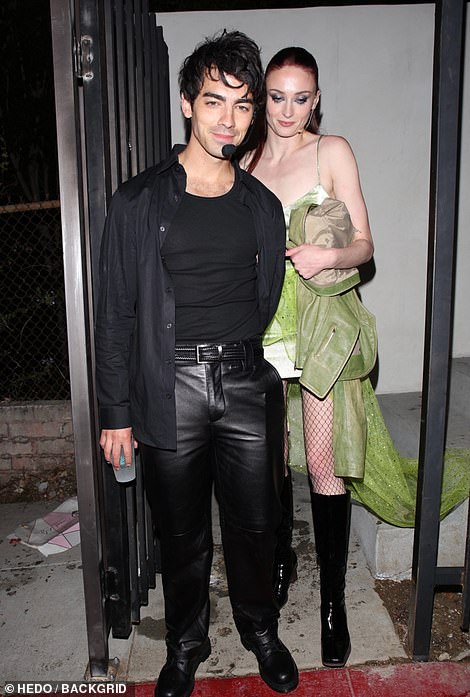 Outfit: Joe Jonas sported an all black outfit with a fake microphone as he departed the bash with Sophie 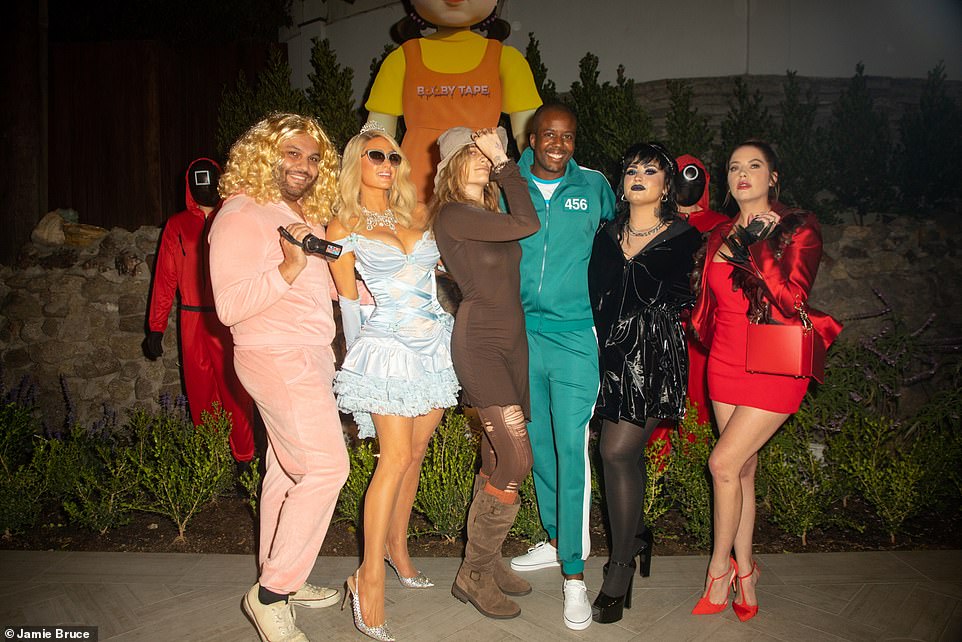 Pals: Also in attendance at the bash was Demi Lovato (second from right) who opted for an all black look 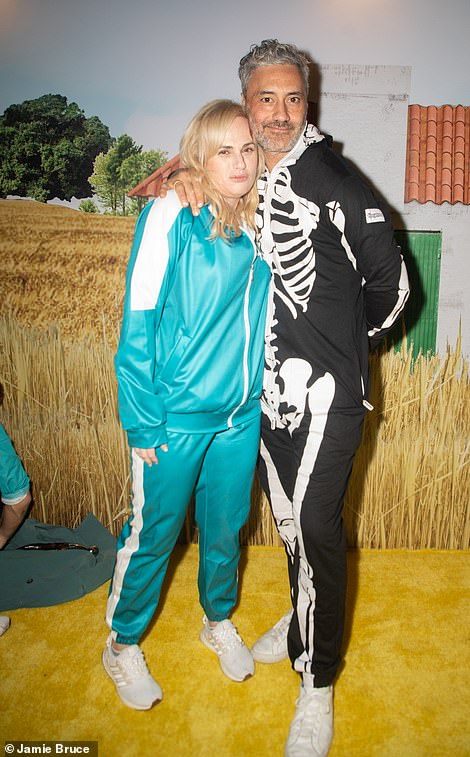 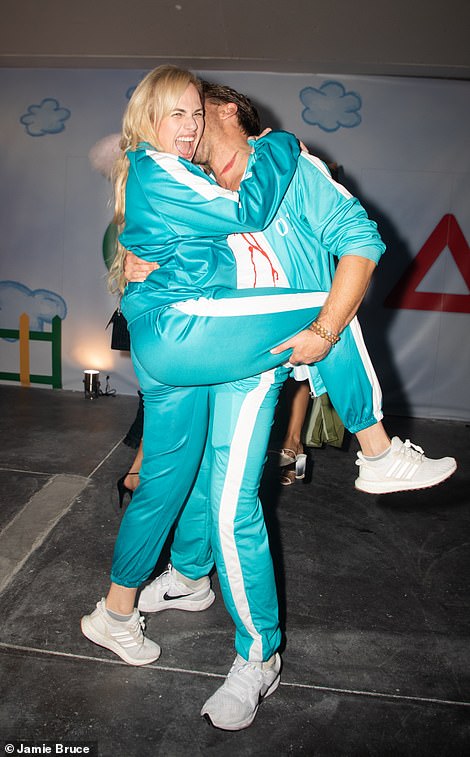 Sophie looked incredible in a lime green mini dress and white top which she wore with a green sheer shawl.

The former Game of Thrones star added height to her frame with a pair of black leather boots while she let her locks fall loose down her shoulders.

Meanwhile, Robert Pattinson was one of the few attendees not dressed up as he arrived in a dark jacket with a blue shirt and beige trousers.

His girlfriend Suki Waterhouse donned a black leather jacket which she paired with a sheer patterned skirt. 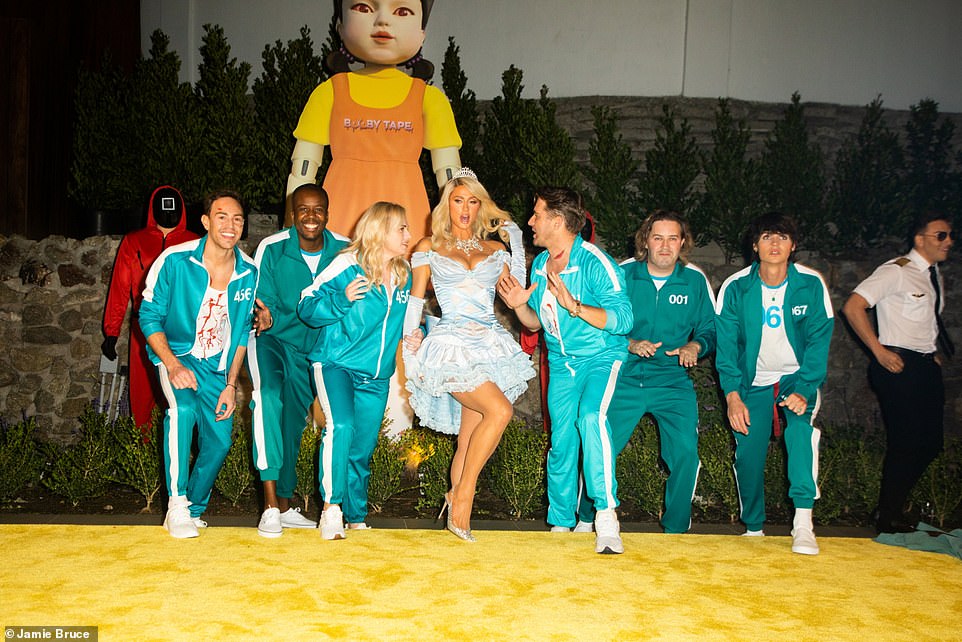 Sensational: Paris’ costume also featured light blue sleeves while she added height to her frame with a pair of heels

Justin Bieber and wife Hailey were also among the attendees at the A-list bash, with the singer donning a chipmunk costume.

Hailey went for an all black look, sporting a leather jacket and matching boots along with a raven wig.

The model also donned a pair of clear heels and added to her look with a pair of white angel wings as she attended the bash alongside Tyga’s ex-girlfriend Amanda Trivizas. 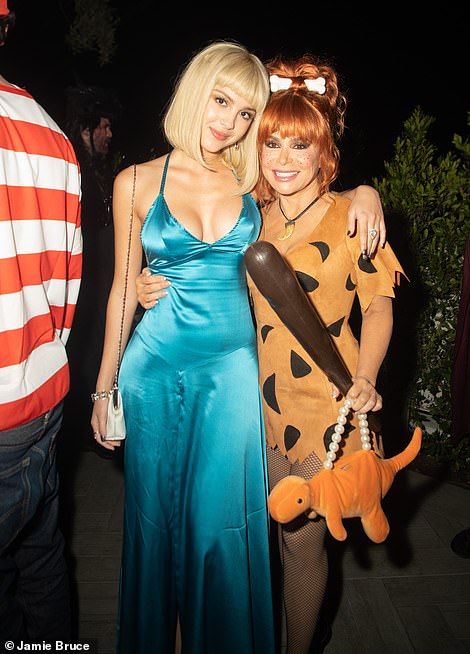 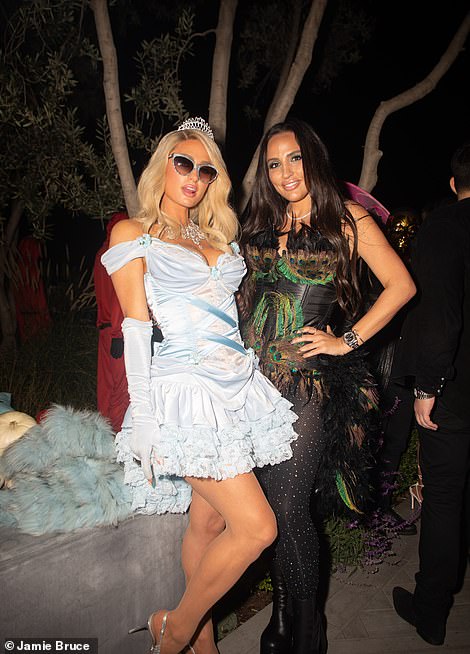 Guests: Olivia Rodrigo and Paula Abdul posed for a snap while Paris was joined by Booby Tape CEO Bianca Roccisano