Students who survived the Florida school shooting began a journey Tuesday to the state Capitol to urge lawmakers to prevent another massacre, but within hours the gun-friendly Legislature had effectively halted any possibility of banning assault rifles like the one used in the attack.

The legislative action further energized the teens as they prepared to confront legislators who have quashed gun-control efforts for decades in a state where 1.3 million people have concealed carry permits.

Three buses set out for Tallahassee carrying 100 students who, in the aftermath of the attack that killed 17 people, want to revive the gun-control movement. The teens carried sleeping bags and pillows and hugged their parents as they departed, many wearing burgundy T-shirts in school colors.

Sheryl Acquarola (second from left), a 16 year-old junior from Marjory Stoneman Douglas High School is overcome with emotion in the east gallery of the House of Representatives after the representatives voted not to hear the bill banning assault rifles and large capacity magazines 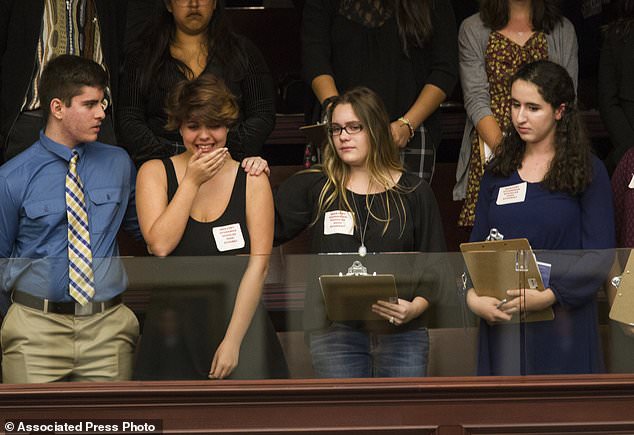 Acquarola (second from left) was one of the survivors of the Marjory Stoneman Douglas High School shooting that left 17 dead, who were in Tallahassee channeling their anger and sadness into action 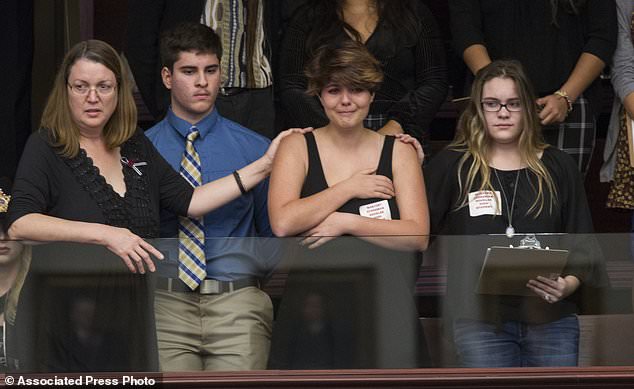 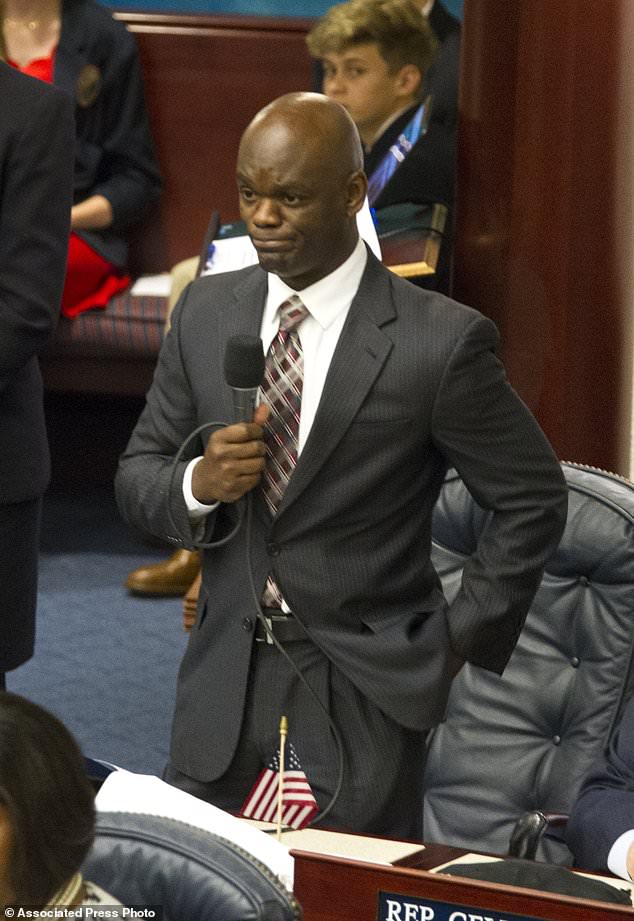 Rep. Kionne McGhee reacts to the Florida House of Representatives refusing to hear a bill to ban assault rifles and large capacity magazines he was trying to bring to the floor at the Florida Capital in Tallahassee 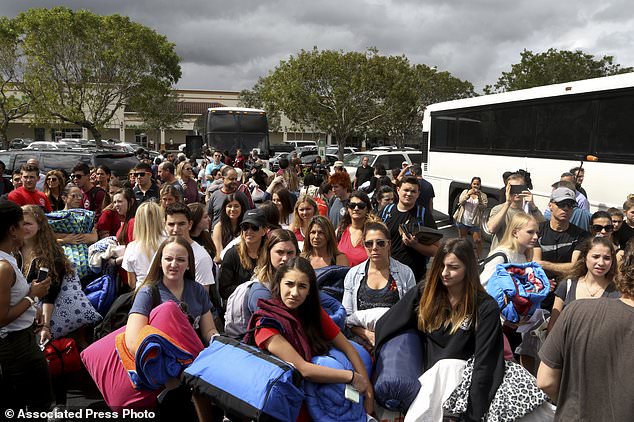 They spent the seven-hour bus ride checking their phones, watching videos and reading comments on social media about the shooting, some of which accused them of being liberal pawns.

Meanwhile at the Statehouse, a Democratic representative asked for a procedural move that would have allowed the Republican-controlled House to consider a ban on large-capacity magazines and assault rifles such as the AR-15 that was wielded by the suspect, Nickolas Cruz.

The bill had been assigned to three committees but was not scheduled for a hearing. The House quickly nixed the Democratic motion. The vote broke down along party lines, and Republicans criticized Democrats for forcing the vote.

Because the committees will not meet again before the legislative session ends March 9, the move essentially extinguishes hope that lawmakers would vote on any sweeping measures to restrict assault rifles, although other proposals could still be considered. 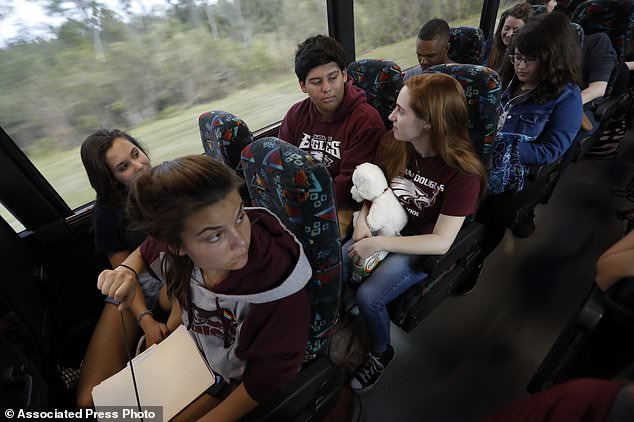 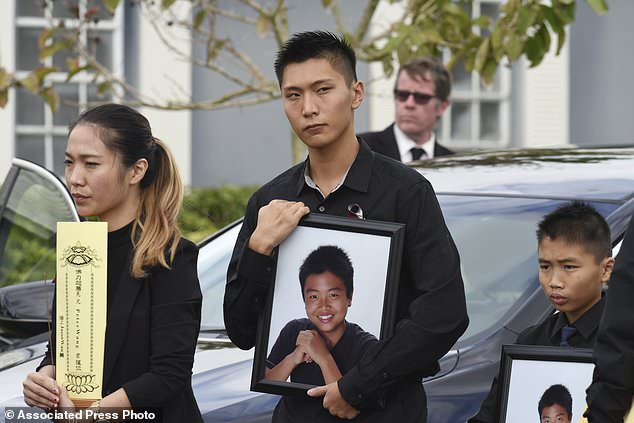 Jason Wang, center, holds a picture of his brother Peter, along with his younger brother, Alex, after his brother’s funeral at Kraeer Funeral Home in Coral Springs, Flordia

‘No one in the world with the slightest little hint of a soul isn’t moved by this tragedy,’ Republican strategist Rick Wilson said. ‘The discussion has to be a longer, bigger and broader discussion.’

Alfonso Calderon, a 16-year-old junior, said he hoped the trip starts a conversation between the Legislature, Gov. Rick Scott and the students over commonsense laws on guns.

‘America is a gun society. That is what made (suspect) Nikolas Cruz seem normal. It is not normal for someone to have a stockpile of weapons in their room when they are mentally ill,’ Calderon said.

The students planned to hold a rally Wednesday to put pressure on the Legislature.

‘I really think they are going to hear us out,’ said Chris Grady, a 19-year-old senior who was on the bus.

The Feb. 14 attack initially appeared to overcome the resistance of some in the state’s political leadership, which has rebuffed gun restrictions since Republicans took control of both the governor’s office and the Legislature in 1999. However, many members of the party still have strong resistance to any gun-control measures.

Republican leaders in the House and Senate say they will consider raising age restrictions for gun purchases and temporarily revoking someone’s guns if that person is deemed a threat to others. As part of the flurry of activity in Tallahassee, the governor on Tuesday also convened groups assigned to propose measures for protecting schools from gun violence. 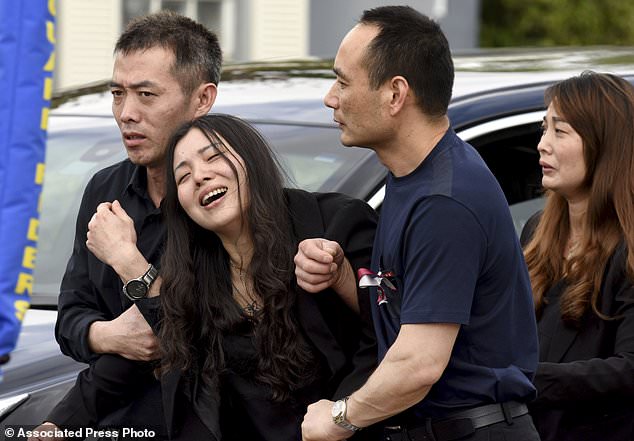 Peter Wang’s mother, Hui, cries as she is helped into a waiting car with her family after the memorial service for her 15-year-old son at Kraeer Funeral Home in Coral Springs, Fla., Tuesday, Feb. 20, 2018. Peter Wang is a victim in the shooting at Marjory Stoneman Douglas High School

Lawmakers will probably say that getting a new bill passed is nearly impossible with only two and a half weeks left in the legislative session. Some lawmakers who are thinking of running on a statewide ticket are mindful of their sensitive positions, since gun owners make up huge voting blocs in some parts of the state, especially the Panhandle.

Wilson said he knows the students ‘want something to happen,’ and they need ‘a moment to come and make their case.’

But, he said, ‘the thought that you get to wave a wand and change the law is something that is probably going to collide with reality.’

Florida has a reputation for expanding – and not restricting – gun rights. Negron sponsored a 2011 bill that Republican Gov. Rick Scott signed into law that banned cities and counties from regulating gun and ammunition sales.

Authorities said Cruz, 19, had a string of run-ins with school authorities that ended with his expulsion. Police also were repeatedly called to his house throughout his childhood. His lawyers said there were many warning signs that he was mentally unstable and potentially violent. Yet he legally purchased a semi-automatic rifle. 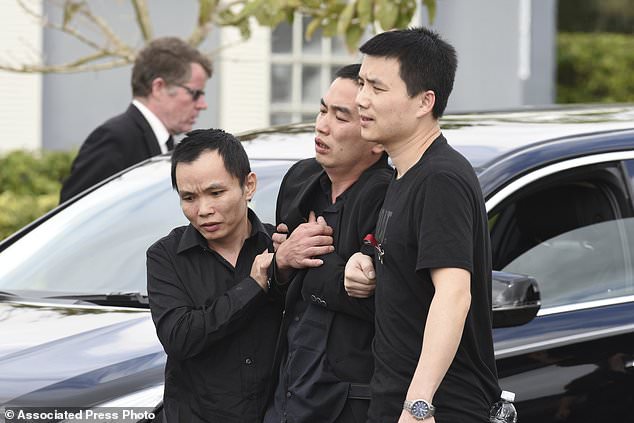 Family members hold up Peter Wang’s father, Kong, after the funeral services for his 15-year-old son at Kraeer Funeral Home in Coral Springs, Fla. Peter Wang is a victim in the shooting at Marjory Stoneman Douglas High School

The Senate is also considering boosting spending on mental health programs for schools and giving law-enforcement greater power to involuntarily hold someone considered a danger to themselves. The chamber will also look at a proposal to deputize a teacher or someone else at school so they are authorized to have a gun.

Kyle Kashuv, a 16-year-old student at Marjory Stoneman Douglas High School, said he was pro-gun prior to the shooting.

‘I had no issue with anyone having a gun of any caliber,’ said Kashuv, as he rode in the bus to Tallahassee. ‘I was all for it. But after the situation, I realized we have some issues in our society and it has to be addressed.

The fact that someone who was so steadfast in support of gun rights now acknowledges the need for changes ‘really shows how important what we’re doing is,’ he said. 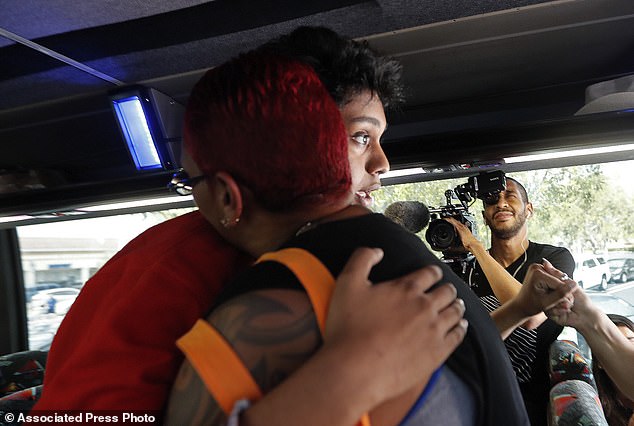 Tanzil Philip, 16, a student from Marjory Stoneman Douglas High School hugs India Godman a survivor of the Pulse nightclub shooting, on the bus before departing Parkland 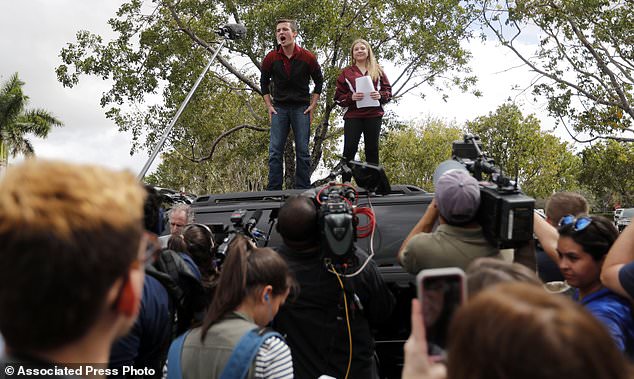 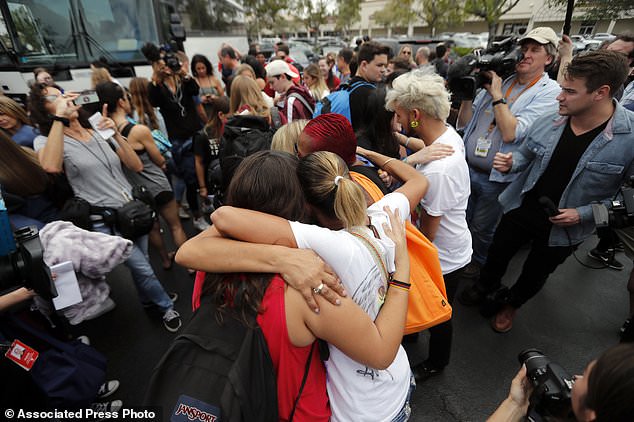 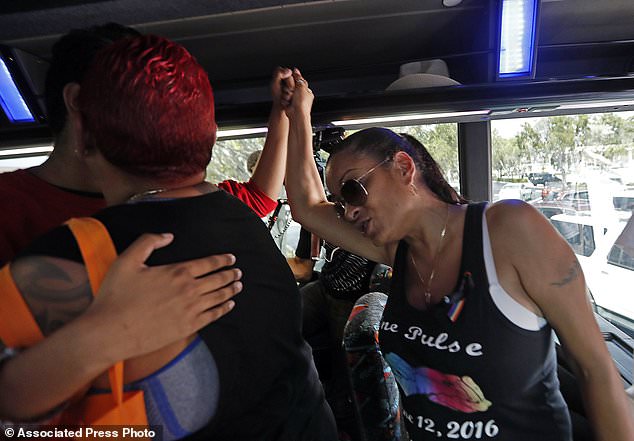 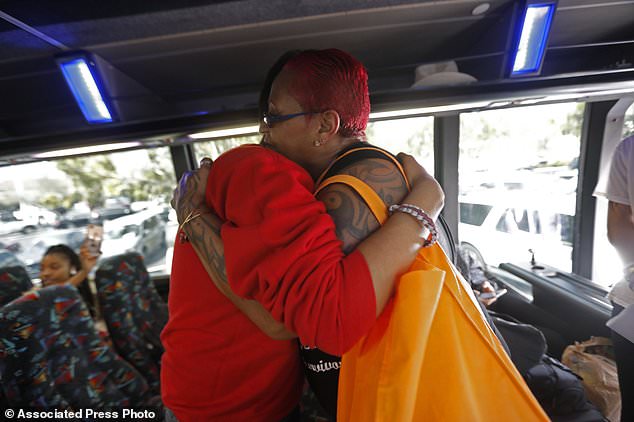 India Godman, a survivor of the Pulse nightclub shooting, hugs Tanzil Philip, 16, a student at Stoneman Douglas High School in Parkland, Fla., Tuesday, Feb. 20, 2018. Students plan to hold a rally Wednesday in hopes that it will put pressure on the state’s Republican-controlled Legislature to consider a sweeping package of gun-control laws, something some GOP lawmakers said Monday they would consider. (AP Photo/Gerald Herbert) 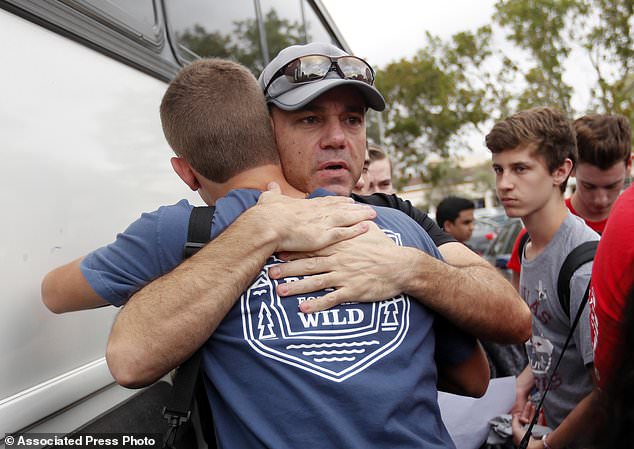