Parkville, Melbourne: Mother and her two children killed after their car crashed into a pole

A mother and her two children have been killed after the car they were travelling in crashed into a power pole and exploded into flames.

A 35-year-old woman, an eight-year-old girl and a 20-month-old boy were killed when their Ford Territory mounted a curb on Flemington Road in Parkville in Melbourne’s inner-city about 9.50am on Friday.

Footage at the scene showed the car in flames on the side of the road as thick black smoke billowed from the vehicle.

A 20-month-old boy, eight-year-old girl and a 35-year-old woman have been killed in a crash outside Royal Melbourne Hospital after their car exploded

The woman was a mother-of-four and had dropped off her two other children at school before the crash outside the Royal Melbourne Hospital, 7News reported.

Police have tracked down the children’s father to inform him of their deaths.

Witnesses close to the scene said the explosion ripped through the car, and a photographer close to scene was hurried away by a police officer as authorities feared the car may explode again. 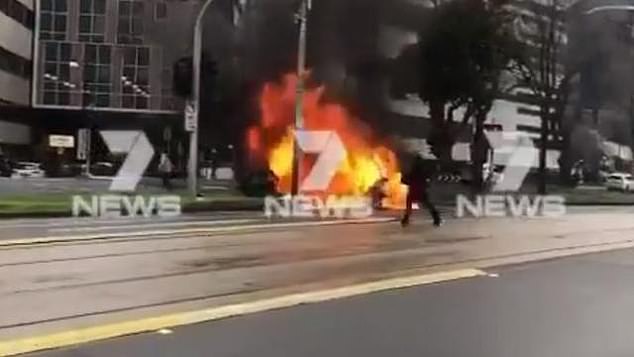 The car hit a curb and crashed on Flemington road in Parkville on Friday morning. Witnesses close to the scene said the explosion ripped through the vehicle

Crisis support services have also been offered to anyone working at the hospital who witnessed the crash.

Flemington Road was initially closed in both directions between Harker Street and Grattan Street as authorities investigated.