Partygoer ‘drugged at gunpoint by two women who then stole $200,000 worth of jewelry’

Two women are wanted by Miami police for allegedly drugging and robbing a man they met in a nightclub last month.

Police hoping to identify the suspects released surveillance video on Tuesday which shows the victim getting into an elevator in his exclusive condo building with two women.

The women are later seen leaving without the man.

Kenia Fallat, a spokeswoman for the Miami Police Department, said the victim spent time with the two women inside a club on the night of September 14 and eventually invited them back to his home in hi-rise block The Riverfront.

Once inside, the women reportedly turned a gun on the victim, forcing him to drink an unknown alcoholic drink. 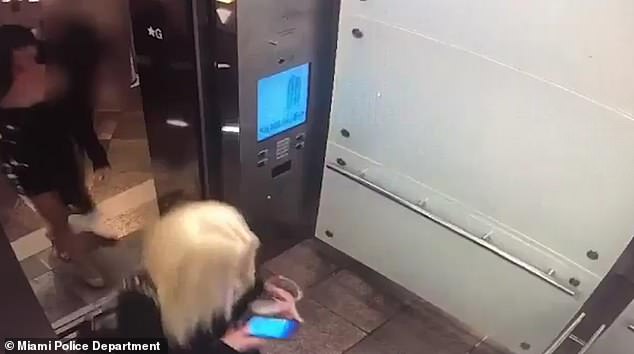 The footage is from the security cameras in the victim’s high-rise condo building, The Riverfront, in the unit block of Southwest Third Street, Miami

Fallat said the man passed out shortly after drinking the substance, and woke up hours later to find more than $200,000 worth of jewelry missing.

The first thief is described by as a white woman, approximately 30 years old with brown hair and a slim build. She is around 5ft 7″ tall and was last seen wearing a black dress.

The second thief is also described by police as a white woman, around 30 years old and 5ft 7″ tall. However she has blonde hair was last seen wearing a black long-sleeve shirt and black shirt. 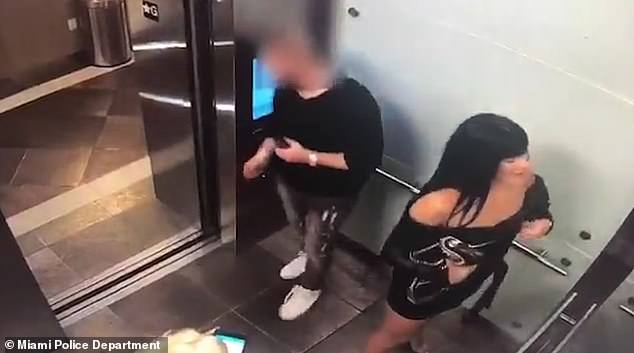 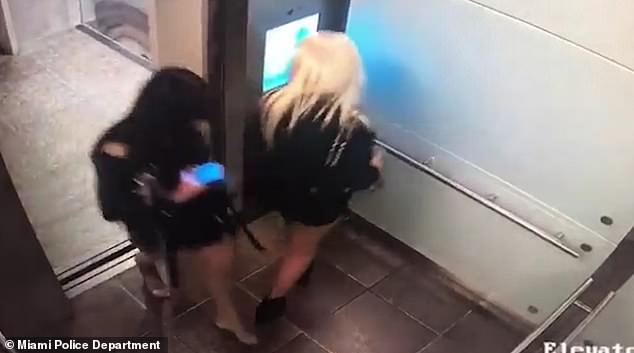 The two women are pictured in the elevator as they leave the building some time later. The victim is not with them

Anyone with information about the case is asked to contact Miami-Dade Crime Stoppers at 305-471-TIPS.

A similar case was reported in May last year when a Florida woman was alleged to have seduced men after meeting them in Miami clubs and making off with their prized possessions.

Yomna Fouad, 21, was accused by Alain Rene Galette, 31, of taking off with his clothing, cash, jewerly and a Rolex watch totaling $32,000 in value after the two met at the valet outside of a nightclub before going back to his place.

Surveillance footage showed Galette and Fouad entering his building, and then later Fouad leaving by herself, with his belongings, Galette claimed.

‘I wake up drugged, not knowing what’s going on, and all my stuff missing,’ he said.

‘She was an innocent face,’ Galette added. ‘I was not expecting that from her.’

Around the same time – June 2017 – but on the other side of the country, California police put out an appeal for information in a similar case.

In this instance, a woman allegedly robbed two wealthy men after drugging them with spiked drinks when they returned to an apartment from a Hollywood club.

Police in Los Angeles say the unidentified 20-year-old woman stole the men’s watches along with jewelry and cash, making off with around $200,000 of goods.

She was filmed entering the building on the arm of one man after meeting the pair on a night out. Once inside the home, the victims say she made them a drink laced with drugs and they passed out.