A 4,000 tonne passenger ferry ploughed into a yacht and almost crushed a family of sailors because its captain failed to keep a ‘proper’ lookout, a court today heard.

Captain Ian Drummond sat ‘static’ in his chair as the 305ft Red Funnel vessel smashed into the 32ft motor cruiser and forced it to tilt with four passengers inside, prosecutors allege.

Smashed glass was flung across the yacht, hurling the terrified sailors to the ground as it tipped about 70 degrees and nearly capsized.

But experienced Drummond remained completely ‘unaware’ the Isle of Wight-bound Red Falcon ferry had crashed into the yacht during its journey across the Solent from Southampton.

The 62 year old only learned of the collision just before his vessel then ran aground in Cowes, Isle of Wight.

Southampton Magistrates’ Court today heard Julie Jackson was with husband Peter on their diesel-powered Phoenix yacht when she was ‘thrown’ across the vessel by the impact.

She was left in shock as the couple and her brother and sister-in-law rushed to put on life jackets while water began to engulf the vessel.

In a statement read to the court, Mrs Jackson said: ‘As I stepped out on the deck, I was made aware of a number of things happening all at once. 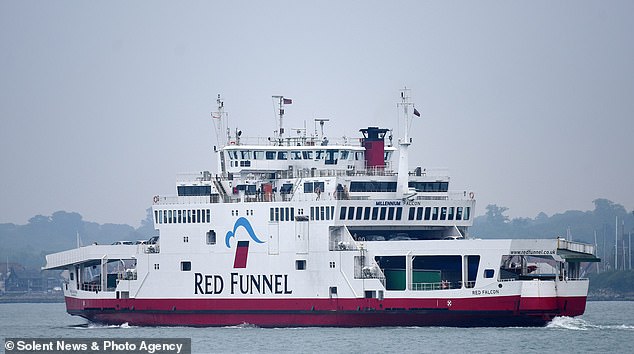 The 305ft Red Funnel vessel smashed into the 32ft motor cruiser and forced it to tilt with four passengers inside, prosecutors allege

‘I heard a loud bang, glass smashing, and saw a wall of red on my right-hand side. At the same time, I was thrown towards the seating area.

‘We started to put on our life jackets on. I sat down shocked.’

Mrs Baxter said: ‘It was not going very fast as I am a nervous passenger onboard.

‘Then the next thing, I heard a loud crashing noise and glass smashing behind me and I could feel a shower of glass pieces hitting me on my back and shoulder area.

‘I could see a wall of red. I could not believe it. The ferry had carried on without stopping.’ 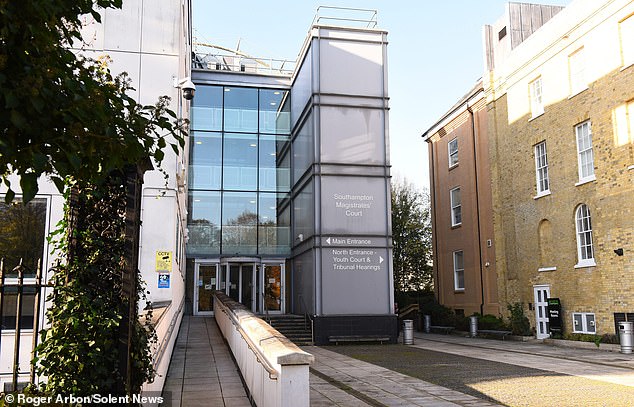 Prosecutors allege Drummond, who began sailing in 1972, would have spotted the yacht in front of the Red Funnel ferry if he had ordered a ‘simple lookout’.

He also failed to view CCTV ‘immediately’ in front of him, the court was told.

The 62-year-old has since claimed modifications made to the ferry in 2014 – which saw it raised in height to accommodate more passengers – meant a further lookout was needed but his pleas were allegedly ignored by Red Funnel.

Opening the case, prosecutor Oliver Willmott said: ‘He had been on the Solent, working this route, for many years. They are notoriously busy waters, there’s an enormous amount of traffic.

‘Others on the Solent saw it, and in fact, passengers on board saw it, but Captain Drummond did not.

‘If there had been a proper lookout, the vessel would have been sighted and avoided.

‘The vessel was visible. A simple lookout through the bridge windows would have avoided it. She wasn’t detected so there wasn’t a proper lookout.

‘Throughout this period, from the point when a radio communication is made, and after the collision, Captain Drummond is static.

Drummond, of Southampton, denies misconduct of master likely to endanger ships, structures or individuals, and being the master responsible for conduct of a vessel contravening the Merchant Shipping regulations on September 29 last year.

Mr Willmott added: ‘It is said by Captain Drummond in interviews that he had told the company from the word go, when the modifications came, that there needed to be another lookout on the bridge, but he had been ignored.

‘If that’s the case, then Captain Drummond should never have sailed.’

Gordon MacKenzie today told the court he was sailing his motor boat ‘Tinkerbell’ with a friend when it became apparent the Red Falcon and Phoenix were ‘on a collision course’.

It listed steeply to one side for about one minute, ‘semi-submerged’ in the water, before managing to straighten up again, he said.

The marine engineer told the court he called 999 as the Red Falcon continued on its course towards Cowes and also sounded his horn constantly for two-and-a-half minutes to signal danger.

He then escorted the family onboard the Phoenix – which suffered ‘substantial’ damage – to Cowes.

In interview, Drummond told coastguards he ‘never saw a thing’ despite keeping a look out for possible hazards during the voyage.

The defendant, a former HGV driving instructor, said he could not understand how the yacht managed to make its way in front of the Red Falcon and had replayed the incident over in his head.

Fellow captains have since called him to ‘sympathise’ over the crash, he told the Maritime and Coastguard Agency.

Drummond – who claimed he taught ‘half the Red Funnel captains’ – went on to say he only noticed a ‘scuff’ mark on the side of the ferry once in Cowes.

The court heard he said: ‘I have always loved this job. I have sailed around the Solent all my life. I’m a yachtsman, I have my own boat.

‘I have seen every single situation out there on the Solent that’s possible.. I can honestly say there was nothing there that gave me cause for concern.. I never saw a thing.

‘I don’t understand how this boat got there.

’99 per cent of yachts are as good as gold, they keep out of your way.’

Drummond added: ‘I would feel really guilty if I knew what to feel guilty about. It’s really frustrating. I have been thinking about it every single day for the last two months.

‘I have been out there [on the Solent] so often, I’m used to checking.’