When they first boarded the Norwegian Escape a week ago, passengers knew exactly where they were going. Now they have no idea.

The cruise ship, with about 4,000 guests on board, departed from Miami on Saturday, September 2, and was scheduled to return a week later, after making stops in Honduras, Belize and Mexico.

The boat made it to the Honduran island of Roatan on Monday and Belize the following day. But on Tuesday, passengers were told that their ports of call at Mexico’s Cozumel island and the Costa Maya had been canceled.

The Norwegian Escape, pictured above in 2015, offered shelter to passengers with nowhere to go once Hurricane Irma hit Florida 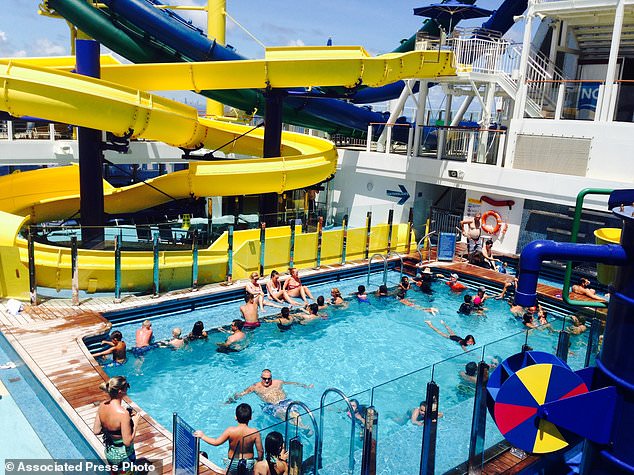 The ship dropped Florida passengers off in Miami on Thursday, then took the rest of its passengers back out to sea to dodge the storm. Above, the ship pictured last Thursday

The dangerous and powerful Hurricane Irma, which had carved a path of death and destruction across a string of Caribbean islands, was headed straight for Florida, home to a fair number of passengers on the ship.

Many of those passengers had already switched from relaxation to disaster-preparation mode, and were eager to get home to secure their belongings and ensure the safety of their pets.

Michael Davis, who lives near the water in St. Augustine, Florida, was one of them.

‘Once they said, ‘We’re heading back,’ then the mood shifted from vacation time to, ‘Alright, let’s get home and get it taken care of,” said Davis, 42.

But there was only a short window of time to drop them off before it would be too dangerous to dock in Miami. So the ship arrived in port Thursday afternoon, two days early, allowing hundreds of passengers to disembark.

Hundreds more had no reason to get off, however, and knew that competing with Florida residents evacuating the state ahead of the storm for rental cars and flights was a losing proposition. So they chose a second option: a ‘cruise to nowhere.’

The Escape headed back out to sea Thursday evening, with a new manifest of about 4,000 that included some of the original passengers as well as some fellow travelers who disembarked early from another ship called the Norwegian Sky. They, too, had decided to prolong their seagoing adventures.

The cruisers went out to sea having no idea where they were headed or when they would return. A lot of it, they were told, would be up to Irma: which path she decides to take and how long she lingers. 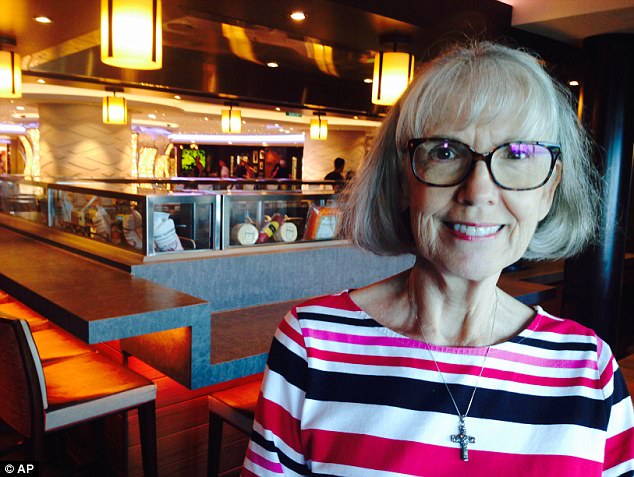 Margaret Cunningham, of Battle Ground, Washington, poses aboard the Norwegian Escape cruise ship, shortly before the huge vessel returned to port in Miami, two days early due to Hurricane Irma. Cunningham and her husband, Mike, were staying aboard the ship, which was headed to safe waters that evening. While it was unknown when or where the ship would return due to the powerful storm, Cunningham said she is assured the ship will be a safe and heavily-supplied haven at sea 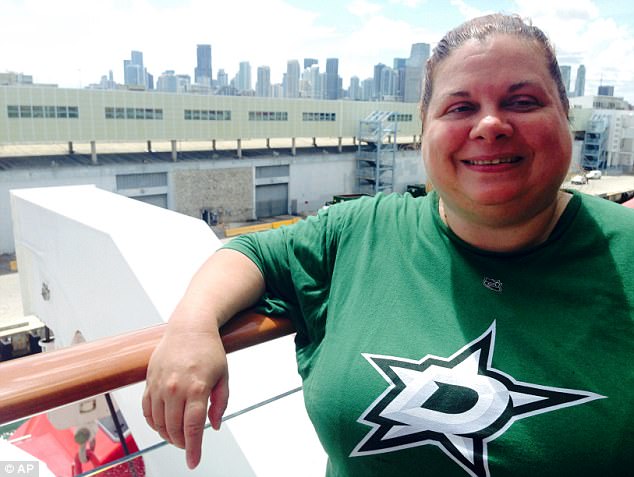 Barbara Engel, of Dallas, Texas, talks about deciding to stay on the Norwegian Escape cruise ship as it pulls back into the Port of Miami two days early due to Hurricane Irma. Engel said she was unable to get a flight home and felt staying aboard the ship was her best option because it was well-supplied and can get away from the storm

Norwegian Cruise Line spokeswoman Vanessa Picariello told USA Today that the company hopes to have the ship back at PortMiami on Tuesday, but that will depend on whether the port is able to reopen by then.

‘We said to guests that we cannot confirm when or where you’ll be coming back, but obviously we’ll make every effort to return the ship to port as soon as it’s safe to do so,’ said Norwegian Cruise Line spokeswoman Vanessa Picariello.

‘We’re making every effort to have at least one port of call,’ Picariello said. ‘If not, it will be a cruise to nowhere and everyone will have a good time.’

As of Monday, the ship was off Cozumel, Mexico.

Margaret Cunningham of Battle Ground, Washington, said she decided to stay on board with her husband, Mike, after the captain assured them the ship could avoid Irma and even outrun a hurricane.

Barbara Engel, who could not get a flight home to Dallas, said she believed staying on the ship was her best option.

‘I’ve got everything here and more than I would want, and we can run’ from the storm if necessary, Engel, 49, said shortly before the ship pulled into port in Miami on Thursday. ‘So really, all told, I think I’m in the best place I can be at this time.’

Debbie Kendrick, of Courtland, Ohio, said she has enjoyed the cruise, even if she hasn’t slept quite as well because she doesn’t know when or where it will end.

‘I appreciate that the cruise line wants to keep us safe,’ she said. ‘They’re not just dropping us off.’

Because of the damage that Irma has done to the eastern Caribbean, the Norwegian Escape will only cruise the western Caribbean for the rest of the season.

Meanwhile, the Norwegian Sky is making a humanitarian mission to the storm ravaged U.S. Virgin Islands.

As of Monday, the ship was on its way to St Thomas in the U.S. Virgin Islands to drop off supplies.

More than 2,000 tourists who were stranded on the island will also get picked up by the ship and taken to San Juan, Puerto Rico, which still has an operational airport.

Most of the other cruise lines are aiding in the Irma relief effort as well.

Before the storm hit Florida, Royal Caribbean used one of its ships to evacuate Florida.

Royal Caribbean is also sending two of its ships to aid the islands of St Thomas and St Maarten, and has two other ships waiting in the wings to aid Florida when the storm passes.

All of the cruise ship companies have offered refunds or credits to passengers whose vacations were impacted by Irma.