There was panic at Tower Hill tube station in London today when an overheated phone charger caused a fire on a train.

Police moved in and evacuated the station near the Tower of London after reports of a ‘explosion’ on a train sparked fears of another terrorist attack.

Officers have since confirmed that a flaming package seen in pictures posted online was in fact a faulty mobile phone charger. 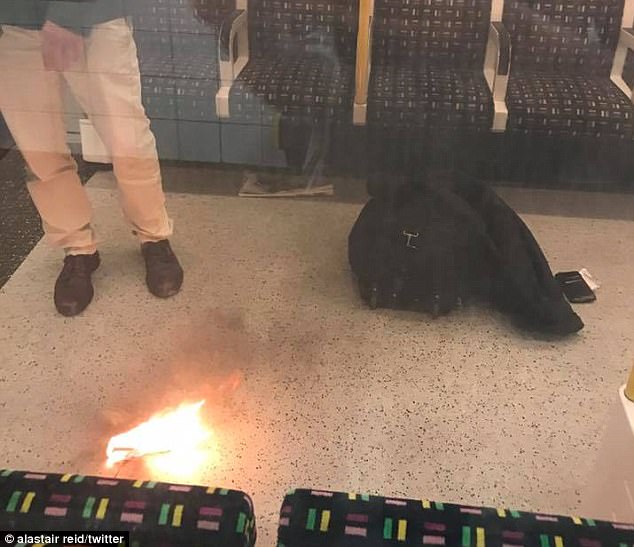 Another image shows a similar scene, with the flaming package on the floor of the tube train

Some of those who were on the platform at the time of the incident said they saw the charger ‘hissing and smoking’ in a train carriage.

One witness suggested the flaming object had been dropped onto the train by someone on the platform of the station, which is the main tube stop for the Tower of London.

A spokesman for British Transport Police said officers were called to the scene shortly before 12.30 this afternoon.

The force later tweeted: ‘Incident at Tower Hill station is not suspicious. Fire believed to have been caused by mobile phone charger overheating.’

London Fire Brigade tweeted: ‘We’ve dealt with a small explosion on a train at Tower Hill station. It is believed to have been caused by a mobile phone charger.’

Pictures from outside the station show crowds of passengers who have been evacuated onto the pavement. A spokesman for the Ambulance Service said one person had received minor injuries.

Transport for London said there was disruption on the circle and district lines while the matter is dealt with. 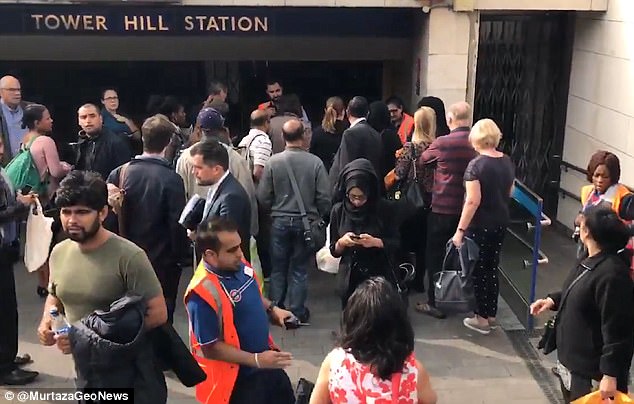 Passengers were evacuated while police and fire crews investigated the blaze