Two hospitals in Southampton have partly closed because of a power cut which reportedly left staff walking around with torches.

The Southampton General and Princess Anne hospitals in the Hampshire city are believed to have had no electricity since before 9am this morning because of a fire.

The A&E department has been closed, outpatient appointments have been cancelled and relatives have been told not to visit patients.

A major incident has been declared at the hospitals, where staff say all patients are safe but which one witness earlier claimed were in ‘complete darkness’.

Southampton General was hit by a fire in an electrical room this morning, to which seven fire engines were sent.

Both of the hospitals, which are just yards apart, are part of the University Hospital Southampton NHS Foundation Trust.

But a spokesperson for the trust this afternoon told MailOnline they were not aware there had been a fire, despite the fire service confirming it had put one out.

They added that no patients have been harmed by the power cut.

The A&E is now closed except for urgent emergencies, and all routine X-rays, blood tests and other outpatient appointments have been cancelled.

Some parts of the buildings were left in complete darkness and vital areas like operating theatres were also affected by the power cut at the 1,100 bed hospital.

Part of the hospital was evacuated, though it isn’t yet known which area. A witness said Southampton General did not appear to have a back-up power source. 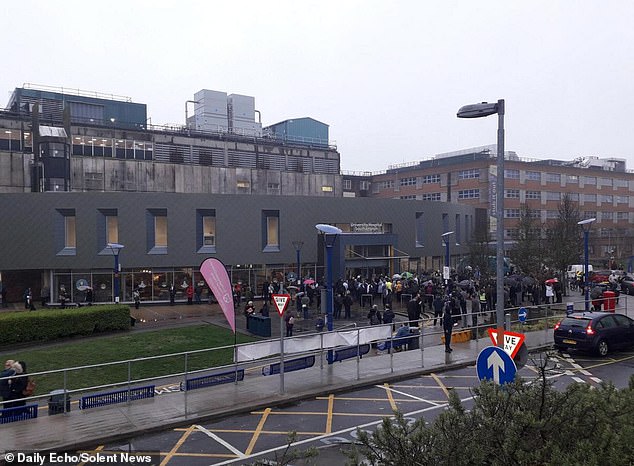 All non-urgent care has been postponed because of the blackout, the hospital has confirmed, and all patients are safe. Staff are ‘busy caring’ and are urging visitors to wait until the issue is over before heading to the hospital

‘University Hospital Southampton has suffered a major power cut and has declared a major incident,’ a spokesperson for the NHS trust said.

‘All patients in Southampton General and the Princess Anne hospitals are safe.

‘All non-urgent activity is cancelled at present. Please do not attend the hospital for non-urgent care such as outpatients, routine X-rays or blood tests.

‘We are asking relatives not to visit the UHS until further notice. Staff are busy caring at present and we would further ask you not to call switchboard if possible.

‘The emergency department is closed for all except urgent emergencies.

‘We will keep you informed as the day goes on and are grateful for your support at present and apologise to those whose care is now delayed.’ 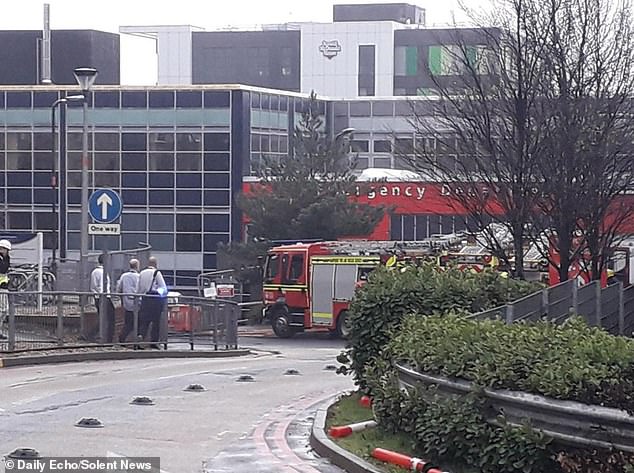 Seven fire engines were sent to the hospital at 8.41am this morning and the fire service said there was a fire in an electrical room, but a spokesperson for the hospital denied knowledge of the fire 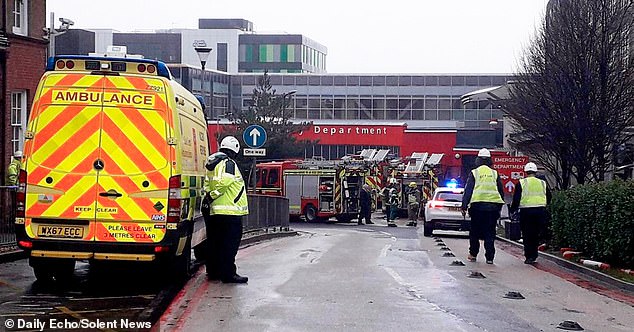 A witness said earlier the hospital was ‘in complete darkness, there are no lights and there is no power. The backup generators haven’t started and people are walking around with torches’ 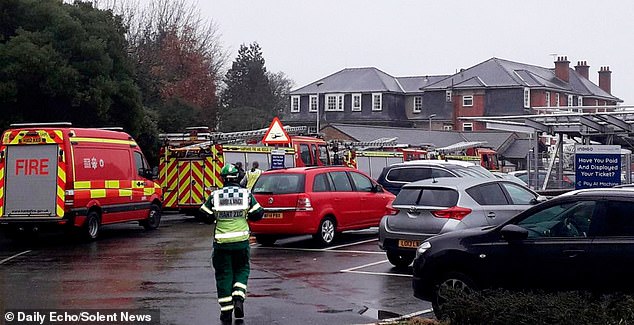 One witness who didn’t want to be named said: ‘The place is in complete darkness, there are no lights and there is no power.

‘The backup generators haven’t started and people are walking around with torches.’

Hampshire Fire and Rescue spokesman, Simon Carr, added: ‘We were called to Southampton General Hospital at 08:41.

‘Seven engines and support vehicles were on the scene. The incident was a fire in an electrical room caused by an overloaded inverter.