By Shaun Wooller Health Editor For The Daily Mail

The Royal College of Nursing has announced it plans to strike at some hospitals on December 15 and 20, but is yet to confirm which locations and services will be affected

Time-critical services for seriously ill patients may also be scaled back or stopped, the letter warned.

Mrs Pritchard admitted to MPs that the NHS was not expecting to hit a major cancer target by March. She said a surge in patients coming forward for cancer checks meant it would no longer be possible to ensure the number waiting more than 62 days to start treatment following an urgent referral would return to pre-pandemic levels by then.

Mrs Pritchard said: ‘We are off target and off trajectory.’

A record 7.1 million people in England are on an NHS waiting list for a diagnostic test, treatment or operation.

Sir James Mackey, national director of elective recovery at NHS England, told the committee that more patients would be offered remote appointments with doctors elsewhere in the country in a bid to tackle the long waits.

It means they could potentially receive treatment or a diagnosis quicker than if they waited to be seen at their local hospital, where demand may be higher.

Health Secretary Steve Barclay said the Government needed to do more to take on ‘vested interests’ to bring down waiting lists. He vowed to give patients more choice about where they have operations, including allowing more to get their procedures done at private hospitals.

Mr Barclay urged hospitals to take more risks and make greater use of artificial intelligence as a way of coping with staff shortages. This may involve using computers to assess X-rays and CT and MRI scans to aid diagnoses.

He said: ‘It may carry some risk, but this should be judged against the risk of the status quo where there may be long delays due to staff shortages.’ Mr Barclay also called for greater transparency on excess death figures, as he highlighted an increase in middle-aged people with heart problems. 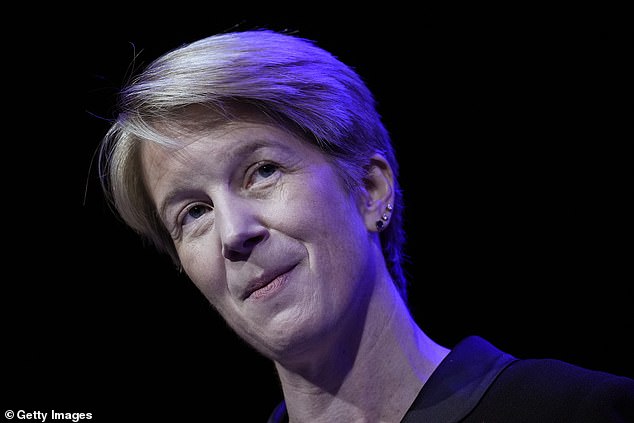 Amanda Pritchard, chief executive of NHS England (pictured), told MPs she could not confirm how far in advance patients would be notified about any changes to upcoming treatment

He said: ‘It’s the result of delays in that age group seeing the GP because of the pandemic and in some cases not getting statins or hypertensives in time, which when coupled with delays to ambulance times, we see this reflected in the excess death numbers.

‘In time we may see a similar challenge in cancer data.’

Figures released by the Office for National Statistics show there have been 8 per cent more deaths recorded in England and Wales from any cause this year than the 2015 to 2019 average.

The Royal College of Nursing has announced it plans to strike at some hospitals on December 15 and 20, but is yet to confirm which locations and services will be affected.

Mr Barclay insisted his ‘door is open’ to resume talks with health unions to avert strike action as he warned ‘there will be impacts on patients if the strikes go ahead’.

It comes amid reports that Armed Forces personnel could drive ambulances and stand in for frontline hospital roles during the NHS strikes.