Images from the raid in Pattaya, often referred to as the sex capital of the world, show the middle-aged men sweating heavily and rushing to cover themselves as police burst in on the illegal party.

While the men were not accused of any wrongdoing, the Chinese hotel owner was arrested for illegally running a hotel and hosting sex parties.

Confronting footage taken during the police raid on Saturday night showed a glimpse of Pattaya’s dark underbelly, where western tourists go to take advantage of the booming sex trade business.

Images from the raid in Pattaya, often referred to as the sex capital of the world, show the middle-aged Brits sweating heavily and rushing to cover themselves up

Thailand has tried and failed to ban the nation’s infamous sex trade, with thousands of tourists – including plenty from Australia – flocking there to enjoy the ‘nightlife’.

Prostitution is illegal in Thailand, but the law is largely ignored.

Pictures taken from Pattaya’s sordid strip two years ago show young women pole dancing inside bars while others market services on the street.

The photos show the sheer extent of the sex trade, with men lining up to pay women who are selling themselves like meat. 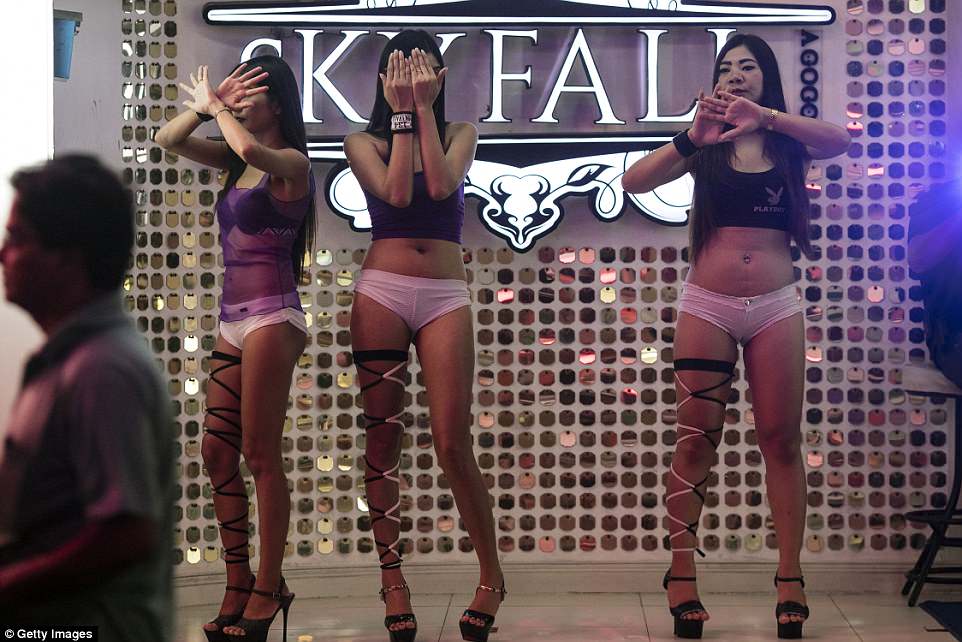 Three women wearing white hot pants attempt to cover their faces as they dance on Walking Street in Pattaya, Thailand 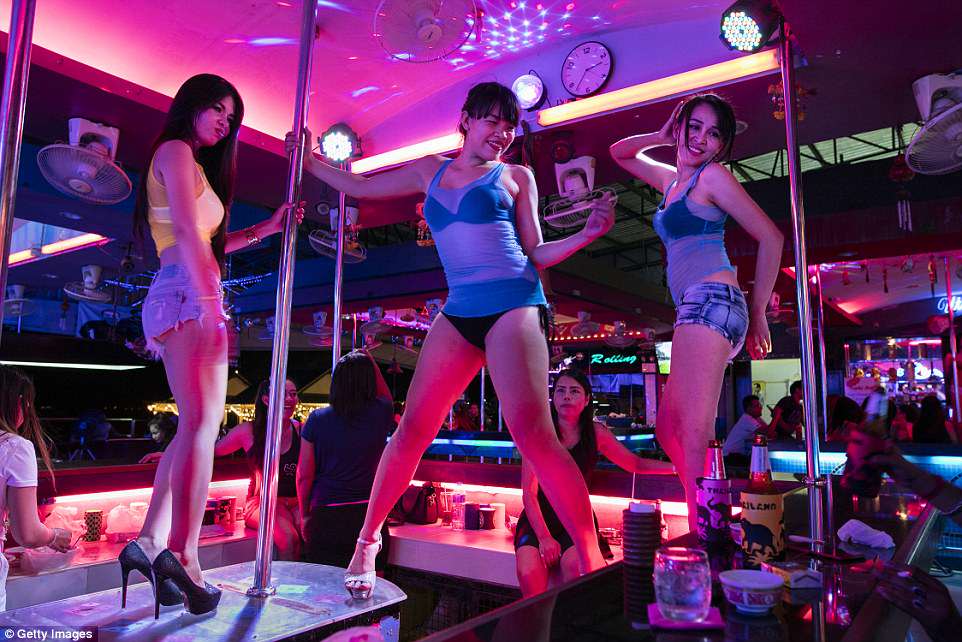 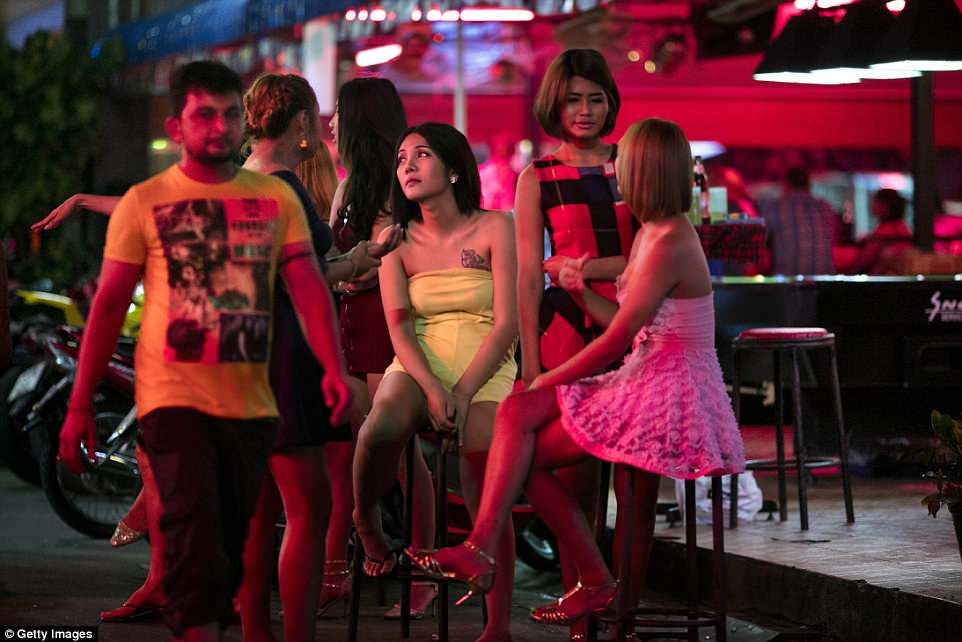 Thai women sit at one of the bars along the busy street where sex scenes are a commonplace in Pattaya, Thailand

The main streets of Pattaya’s red-light district show bars with flashing lights, and enticing names, like ‘Dream Bar’ and ‘Wildcats’.

The sex trade is one of the city’s most profitable, and is the reason thousands of tourists flock to Pattaya year-round.

Thailand has been ranked as one of the best tourist destinations in the world.

There were 35 million visitors to the country in 2017 alone, with forecasts expecting the number to grow with each year. 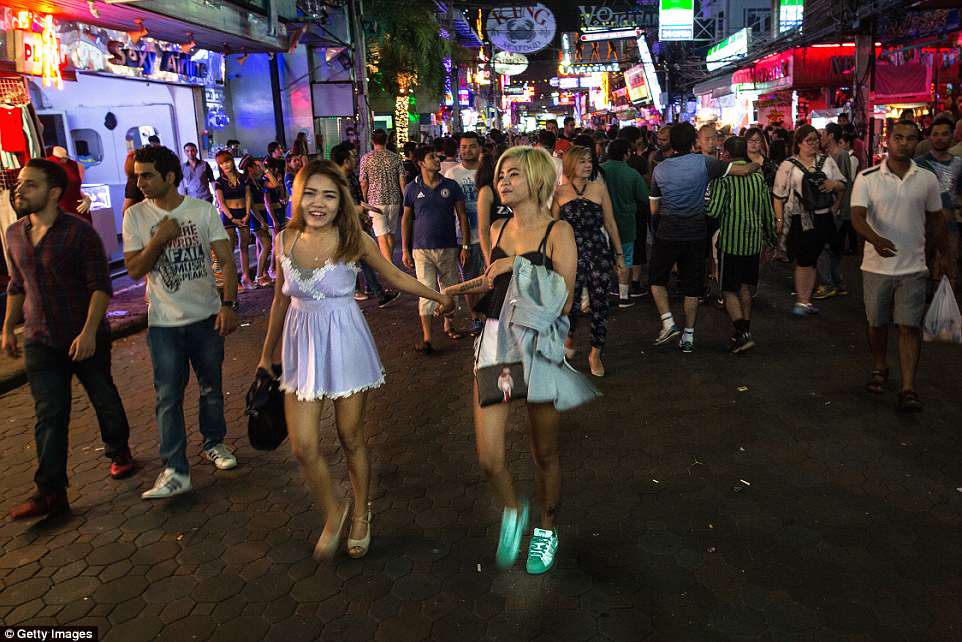 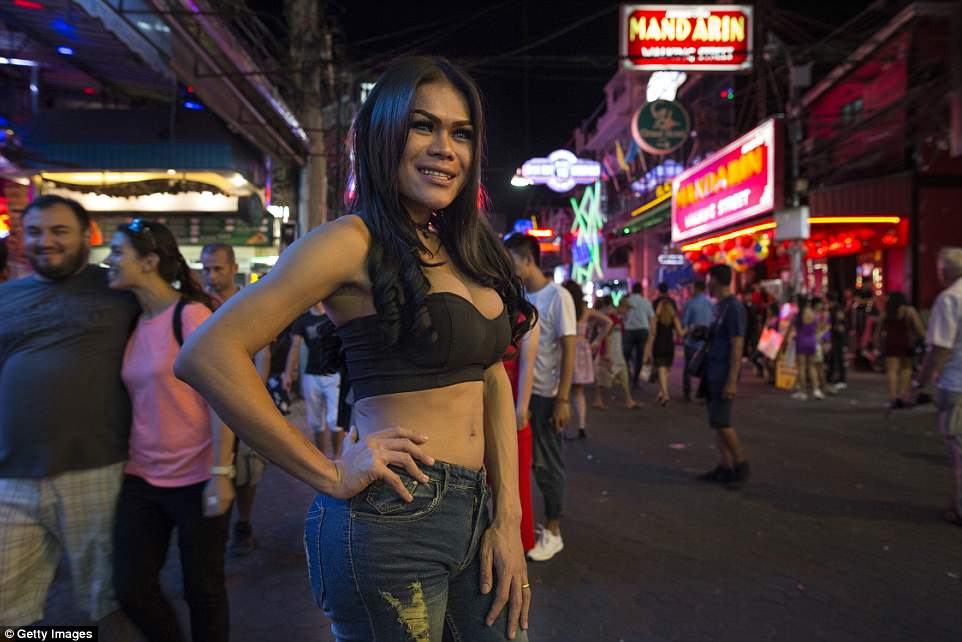 A ladyboy stands on the busy street in Thailand – which is home to an extensive sex industry, largely catering to Thai men 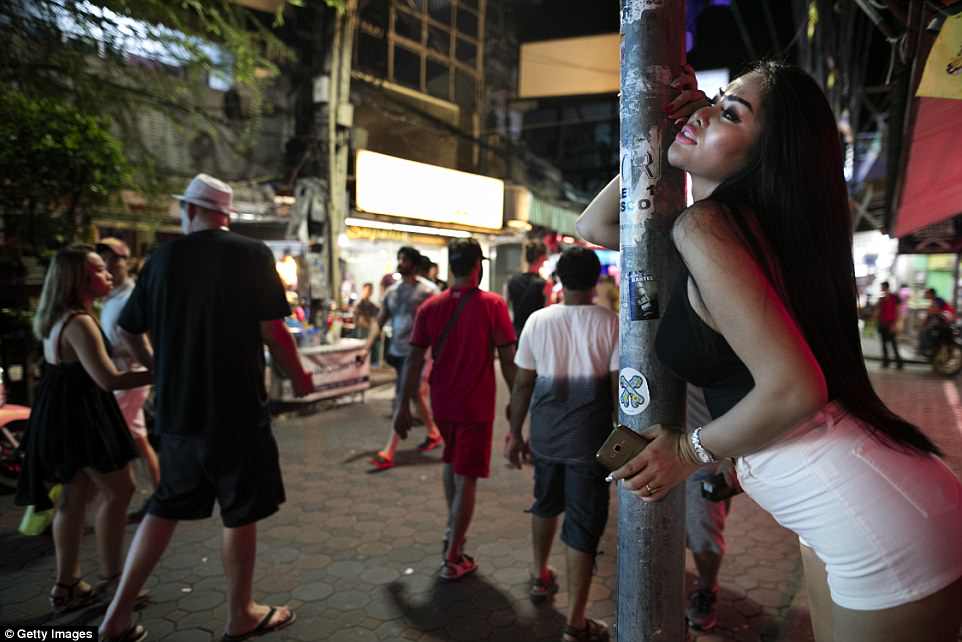 Naris Niwapantawong, District Sheriff in the Banglamung area of Pattaya, said the men from many different countries ‘exchanged partners with each other’.

‘We received a complaint about the Tulip Hotel. We were told they organised sex parties at the weekends,’ he said.

‘My staff co-ordinated with police, immigration and the military to strike quickly and accurately.

‘We carried out the operation while they were having sex and we shut them down.’

The Tulip Hotel in South Pattaya has 30 rooms over four different floors. It is split into several zones, with the one floor dedicated as the ‘play zone’. 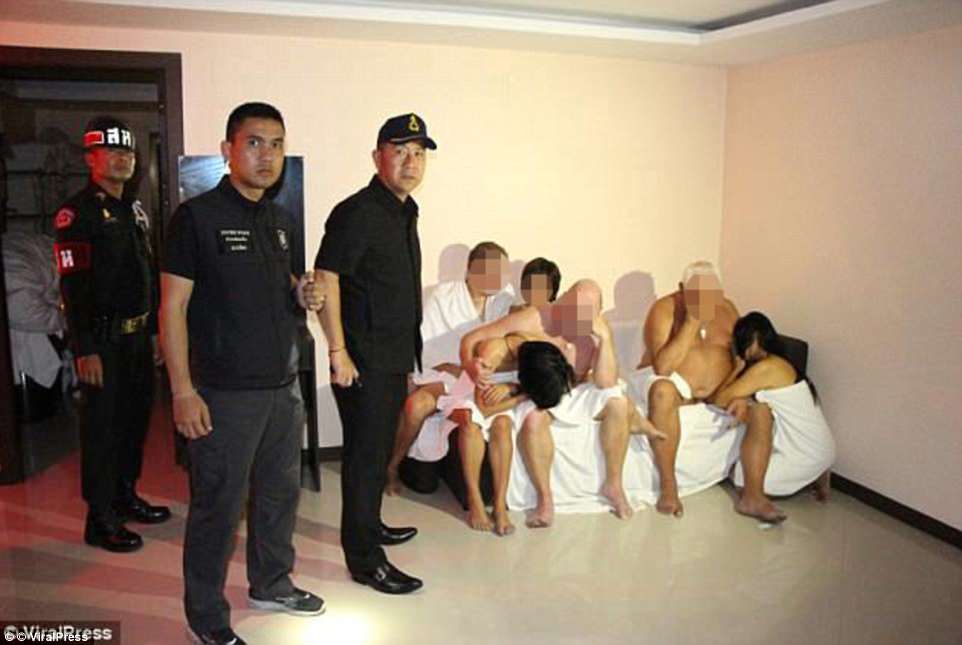 It took place at the Tulip Hotel in Pattaya, often referred to as the sex capital of the world 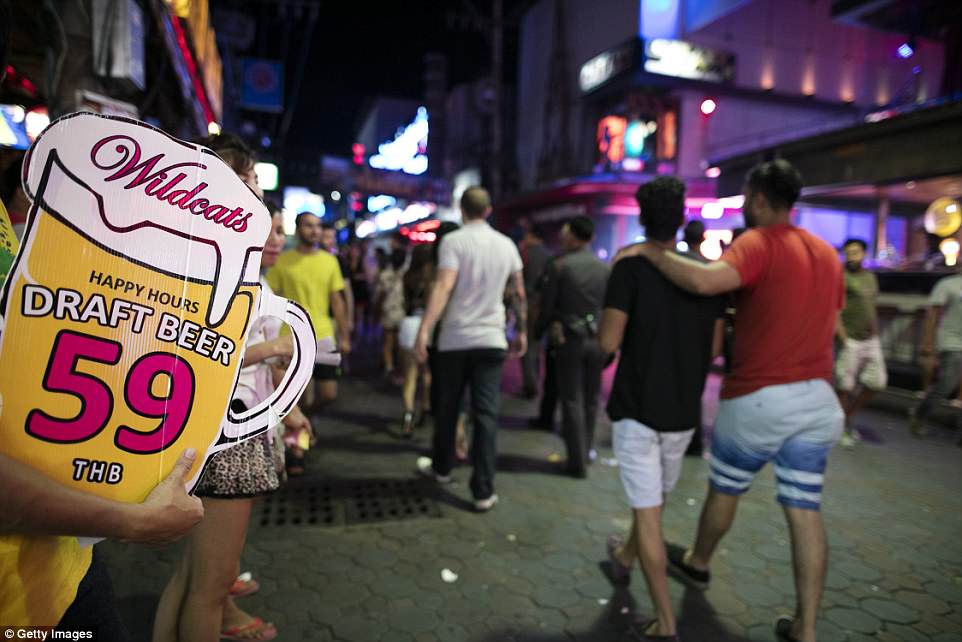 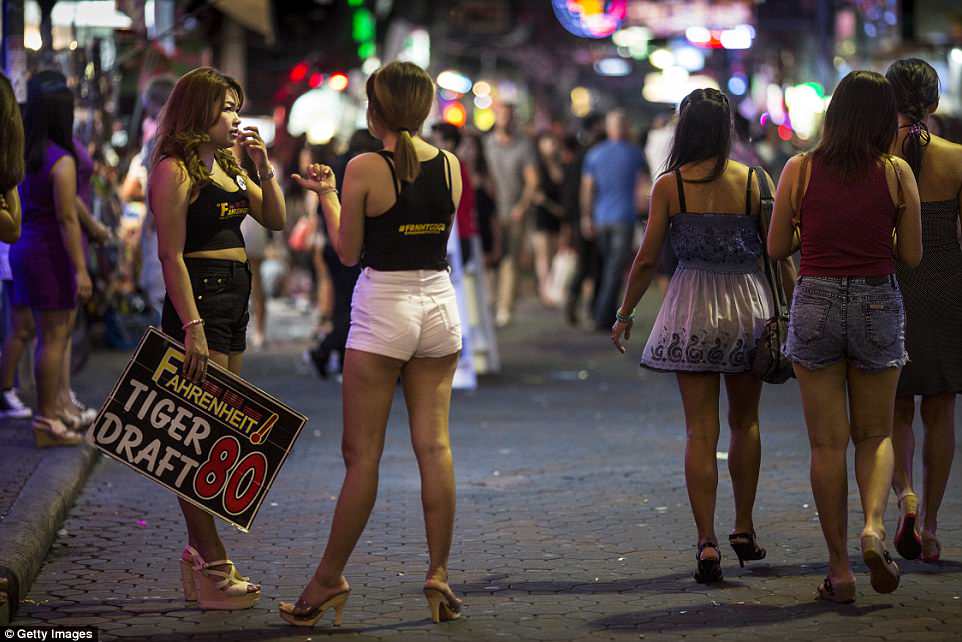 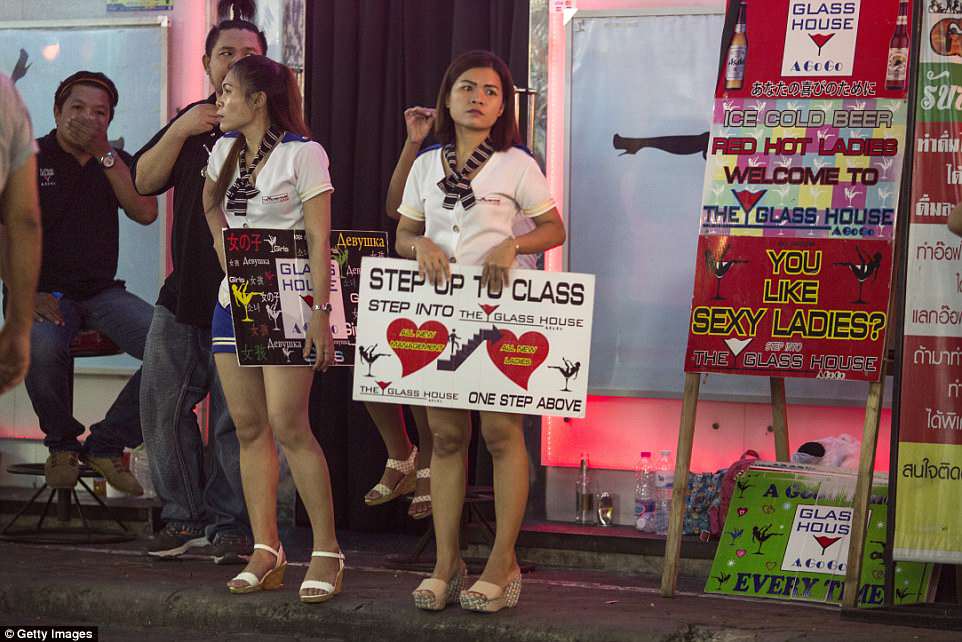 Officers said that ‘almost all the participants’ were in the play zone when the building was raided.

There were also three hotel staff, who were tasked with serving hot tea to the guests, cleaning up the rooms and joining in with the sex games.

Condoms, lubricants and sex toys were also found scattered around the building and collected as evidence.

The hotel owner Sheng Liao Yang, 53, from China was arrested on suspicion of running a hotel without a license and hosting obscene events.

Sheriff Niwapantawong added: ‘The site was hosting parties for those who prefer sex that involve exchanging partners.

‘To attend the event, participants had to register through a website. There was a rule that party members must be male and female couples. The cost per night was 1,500 baht per person. 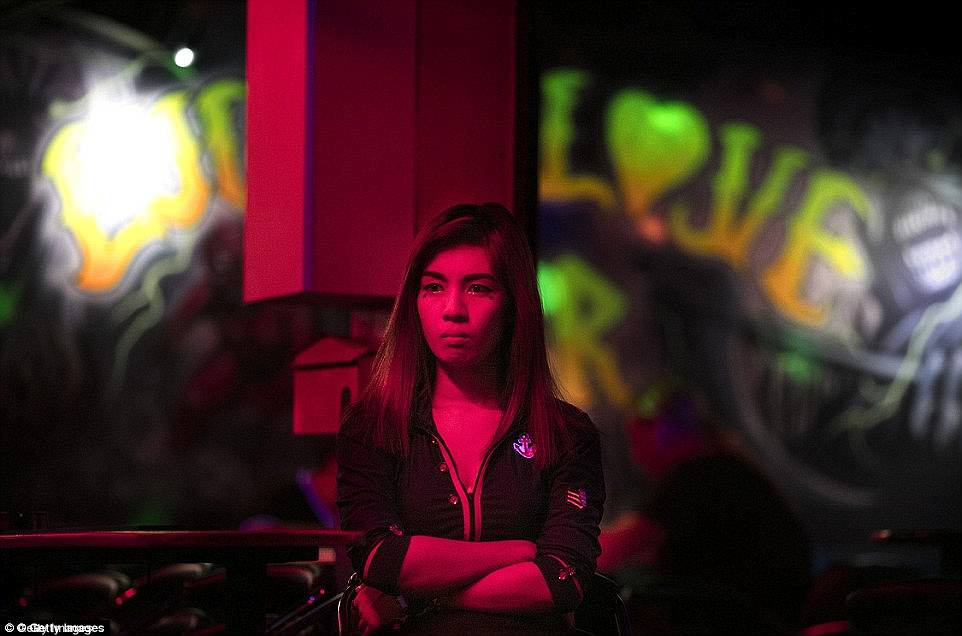 A young woman waits for people at a bar in Pattaya, Thailand, where 35 million visitors flocked to in 2017 alone