Paul Pogba was today stopped in his tracks by Jose Mourinho as the pair had a frosty exchange at Manchester United training.

The fascinating footage emerged as the latest evidence that their troubled relationship is at breaking point, further cementing the fears of many United supporters.

A bubbly Pogba was filmed running out to training this morning, where he high-fives coach Michael Carrick before an awkward handshake with Mourinho. 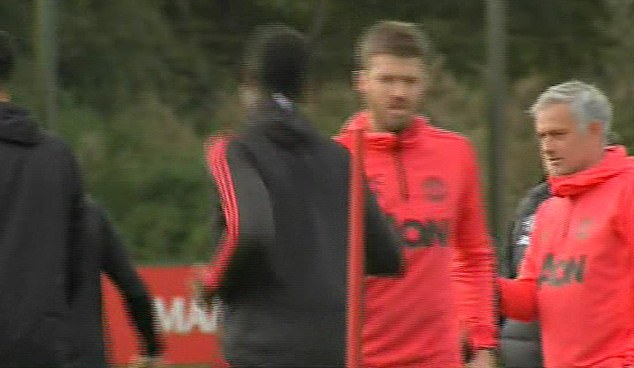 The midfielder shared a warm embrace with Michael Carrick, but Jose Mourinho came next 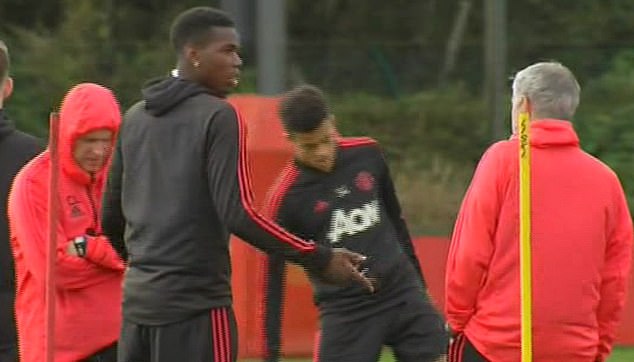 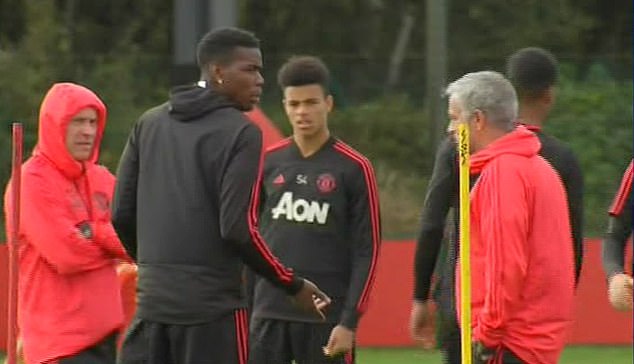 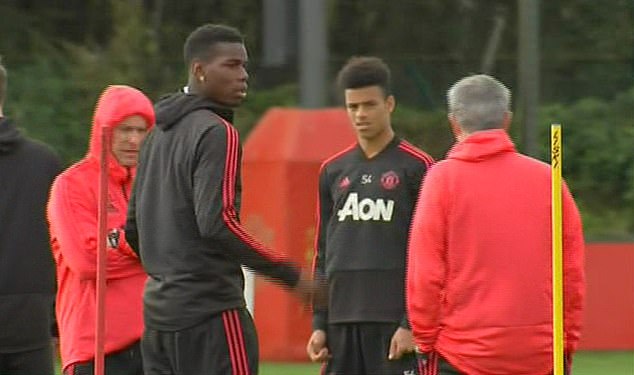 Mourinho was seen making a comment to Pogba, who appeared to scowl in disbelief as he listened to his manager, before a puzzled look quickly spread on his face.

The pair were then seen exchanging words in a heated conversation, at which point Mourinho called over club press officer John Allen.

Allen was then speaking with both men before Pogba marched off nodding his head, and was then seen shrugging his shoulders at his team-mates.

This comes after Tuesday night’s defeat by Derby in the Carabao Cup, when Pogba was dropped from the squad after his criticism of the manager’s tactics.

The tensions between the two huge characters has been rising in recent weeks, with Pogba recently commenting upon the playing style of the team under Mourinho and a need to attack more at Old Trafford.

‘That’s Old Trafford. We are here to attack. I think teams are scared when they see Man United attacking and attacking. That was our mistake today.’ 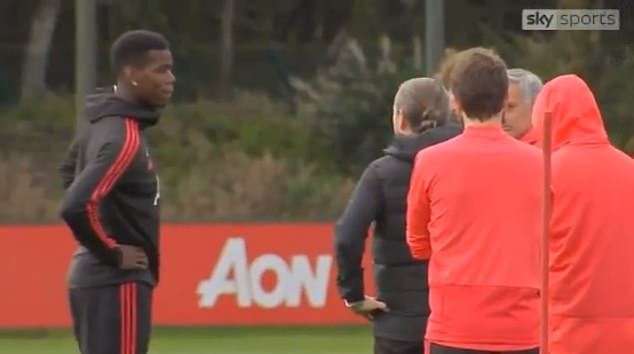 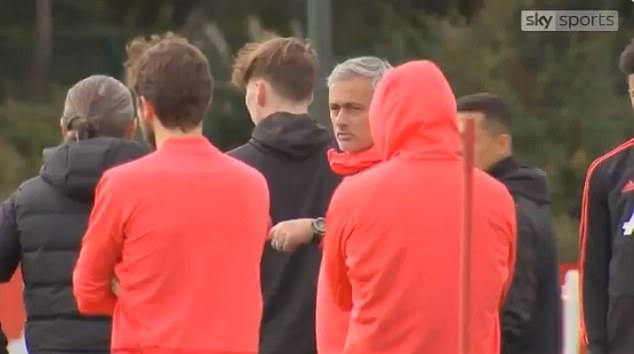 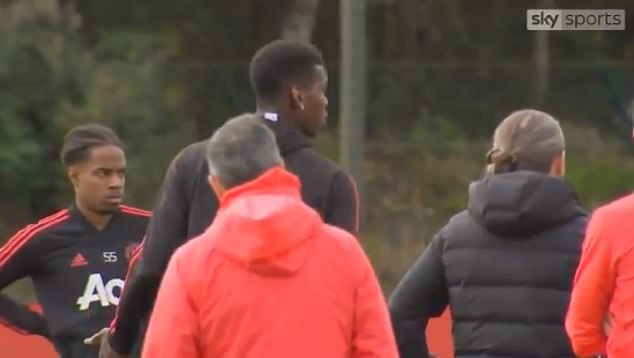 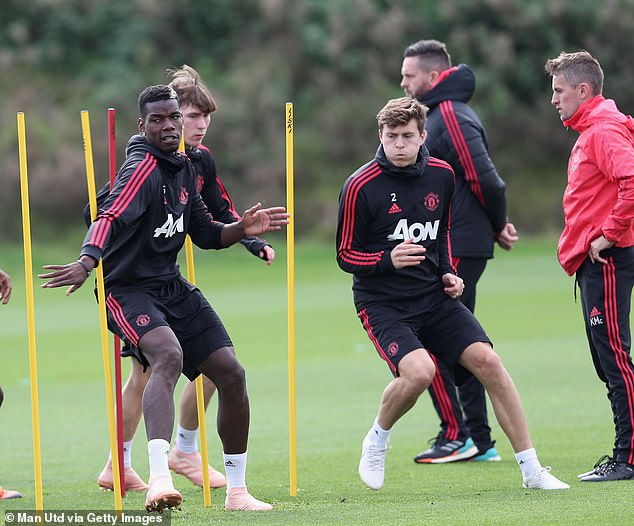 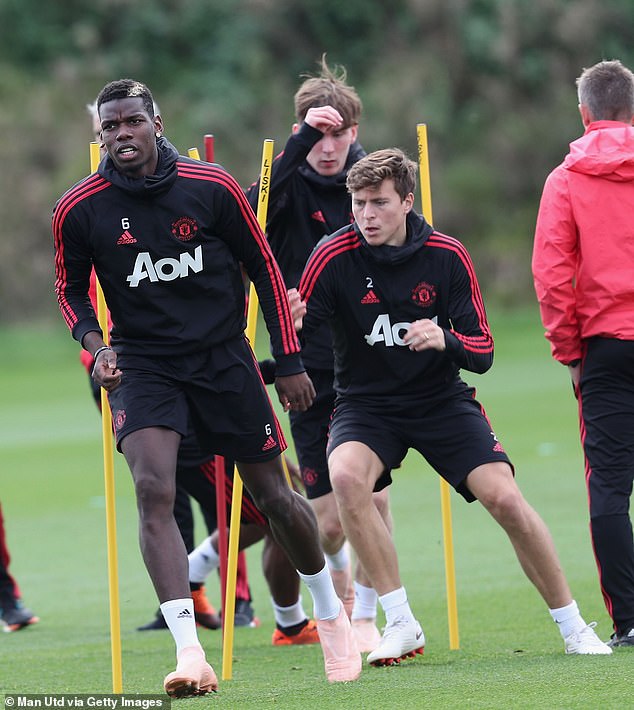 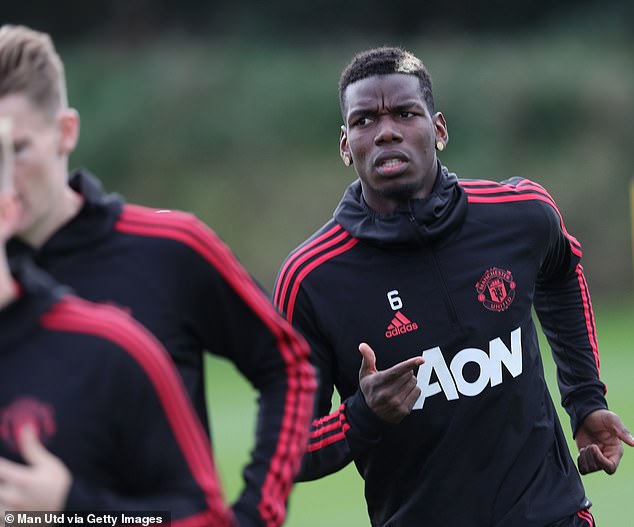 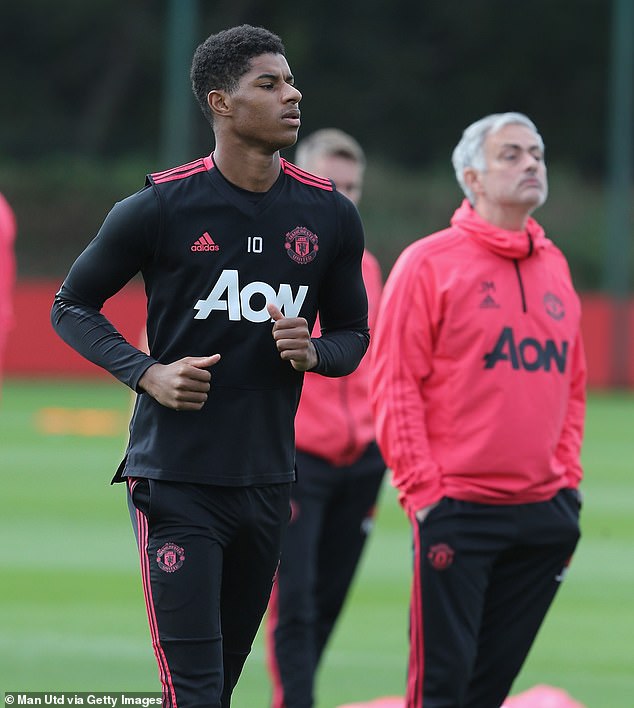 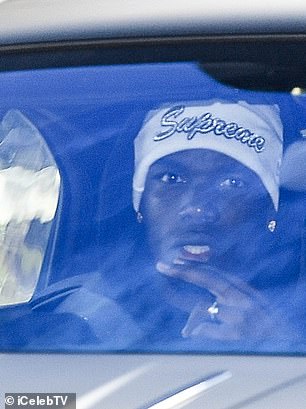 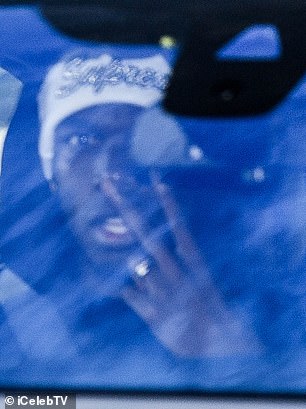 Asked what was stopping United from attacking, Pogba replied: ‘I can’t tell you because I’m a player. It’s not me.’

Pogba was also stripped of his role as vice-captain amid the ongoing situation, and told he will never wear the armband again.

Pogba led United three times this season but Mourinho came to a decision that it was no longer acceptable for a player pushing for a move to wear the armband, it is understood.

The squad were told of the decision at their Carrington training base hours before the Carabao Cup defeat.

‘The only truth is that I made the decision for Paul not to be the second captain any more,’ said Mourinho.

‘It was the same person who decided Paul was the second captain. No fallout at all, just decisions I do not have to explain.’

Ashley Young took over duties of the armband against Derby, while Pogba watched on from the stands with youngster Andreas Pereira.

As recently revealed by Sportsmail, the relationship between Mourinho and Pogba plummeted to new depths following the star’s insistence to exit United and head to Barcelona. 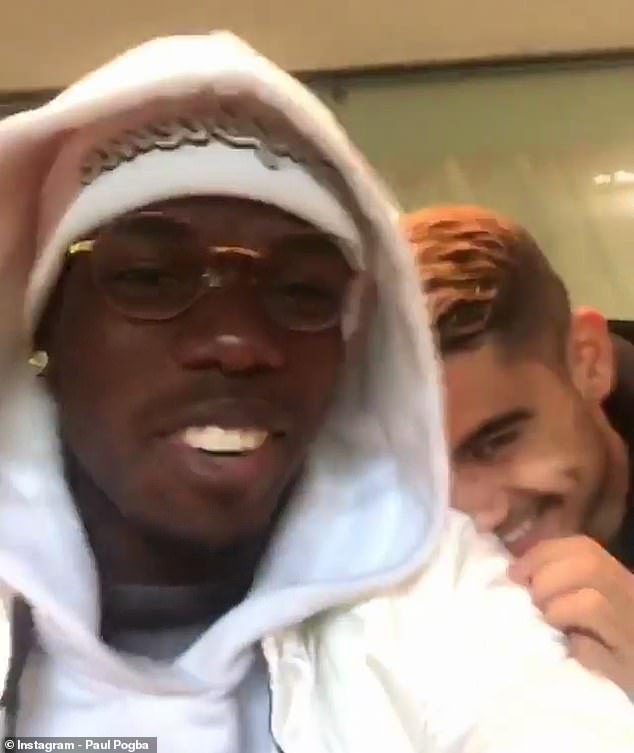 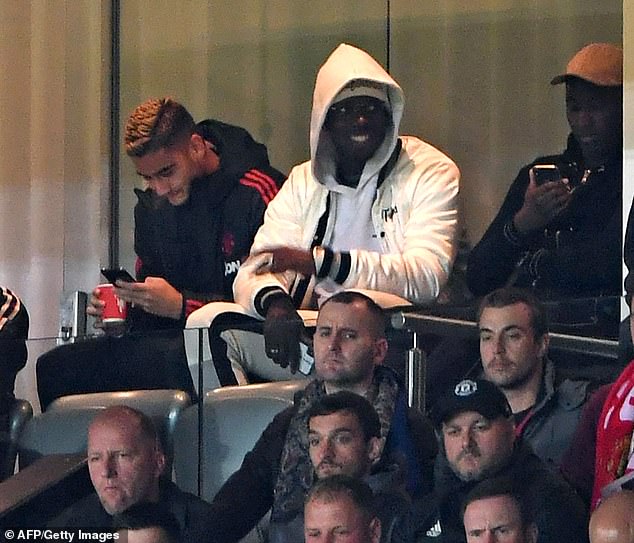 The conduct of Pogba on the way to the recent fixture against Wolves also angered club staff, who felt his loud music on the team bus was deemed to be inappropriate before a big game.

Staff members were unhappy with how the star acted, when they felt there should have been a quieter focus on the match. Pogba has also raised eyebrows by reporting for duty at the team’s Lowry Hotel base in a chauffeur-driven Rolls-Royce this season.

Speculation over the future of the player continues to grow, with Pogba said to have not backed down on his hopes to pursue a move.

Pogba had already informed Old Trafford executive vice-chairman Ed Woodward of his wish to go after his agent Mino Raiola struck a deal with Barcelona over personal terms in the summer.