Paul Scholes criticises Aaron Wan-Bissaka after Man United defender was sent off against Young Boys: ‘He causes himself his own problem with a really clumsy touch’

Paul Scholes has criticised Aaron Wan-Bissaka after the Manchester United right-back was sent off during the Champions League clash away to Young Boys.

With United leading 1-0 courtesy of a goal from Cristiano Ronaldo, Wan-Bissaka received a straight red card in the 35th minute following a challenge on Christopher Martins Pereira.

Wan-Bissaka caught his opponent’s ankle and the BT Sport pundits agreed that, while there wasn’t any real intent, there was no choice but for the 23-year-old to be dismissed. 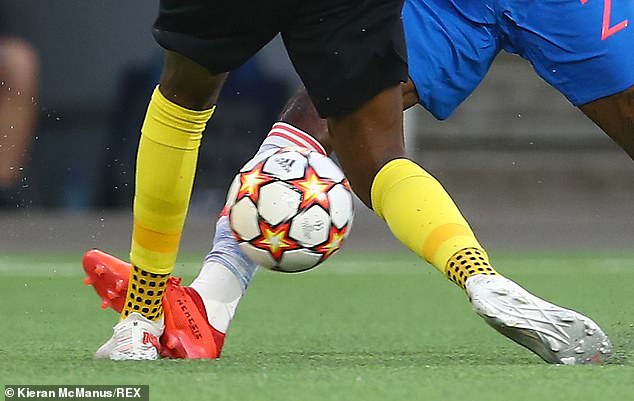 Former United midfielder Scholes believes that Wan-Bissaka was let down by ‘a really clumsy touch.’

Speaking on BT Sport, Scholes said: ‘He causes himself his own problem with a really clumsy touch. I don’t think he meant to do it but he had to go.’

Joe Cole agreed that the decision of referee Francois Letexier to dismiss Wan-Bissaka was the correct one given the force of the challenge.

Cole said: ‘I don’t think there was real intent but once you go in with that force you have to get it right. From that moment it’s inevitable he’ll get sent off. Once you miss it at this level you’ve got to go.’

Former referee Peter Walton also felt that the red card was the right call given the rules.

Walton said: ”Straight red indeed. As we saw in the European Championship, UEFA are coming down very strongly on players that go over the top of the player. Wan-Bissaka over-stretches the ball and clearly catches the player.’

There was another alteration at the break, with Raphael Varane coming on for Donny van de Beek.