Paul Weller, 63, is set to become a grandfather as his daughter Leah is pregnant.

Speaking to The Daily Mail’s Richard Eden, Leah, 29, said she and husband Tomo Kurata, 31, were ‘over the moon’ as they prepare to become first-time parents.

The model also took to Instagram to share a picture of her burgeoning baby bump in a topless photoshoot.

Glowing: Paul Weller’s daughter Leah has revealed that she and husband Tomo Kurata, 31, are ‘over the moon’ as they prepare to become first-time parents

Leah looked radiant in the shot as she posed with one hand on her bump while snuggled up to her husband.

Fellow model Tom also went shirtless as he wrapped his hands around his wife and planted a tender kiss on her forehead.

Leah and Tom wed in September 2018 at Goodwood House in West Sussex, with animal rights activist Leah opting for a vegan wedding cake at the reception. 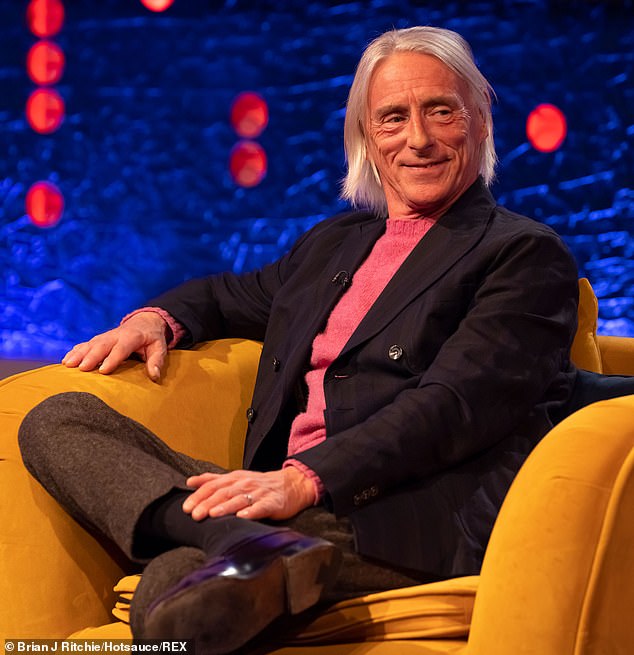 He’s the ‘Modgrandfather’! Leah’s pregnancy means Paul is set to become a grandfather for the first time. The rocker has eight children of his own (pictured in May)

Leah is the eldest of Paul’s eight children, and The Jam frontman shares her and 28-year-old Natt, with British soul singer Dee C. Lee.

Dee originally performed as a backing singer with the late George Michael’s Wham! before joining The Style Council, Paul’s second band, in 1983.

The couple married in 1987 but their relationship ended in 1998. 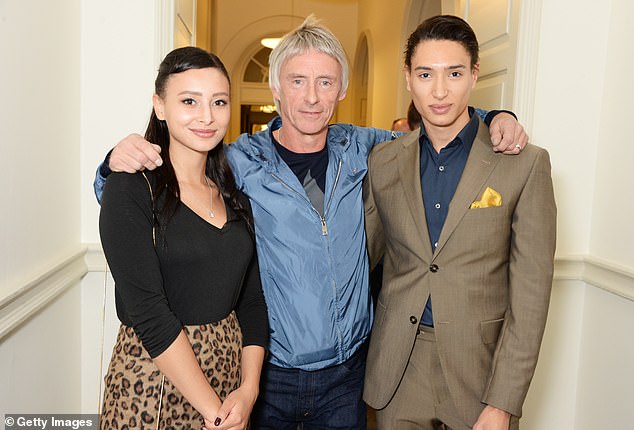 Terrific trio: Leah is the eldest of Paul’s eight children, and The Jam frontman shares her and 28-year-old Natt (pictured in 2014) with British soul singer Dee C. Lee

Paul, who’s known as the Modfather, went on to have a 24-year-old daughter, Dylan, from a fleeting romance with a make-up artist.

He welcomed two more children Jesamine, 20, and Stevie Mac, 16, during his 13-year relationship to Samantha Stock.

The partnership ended when he met Hannah in 2008, when she was 23, and she quickly moved into his Maida Vale home.

In 2017 Paul welcomed his eighth child at the age of 59, a baby girl named Nova.

The child is named after one of the tracks that appears on his 13th album, A Kind Revolution.

Paul, who found fame in post punk band The Jam, joins rock peers Sir Mick Jagger and Sir Rod Stewart by having a total of eight children in his brood.

Talking to The Mirror in 2012, he opened up about being a father, as well as his decision to have children in his fifties.

‘You get certain people who go “Ooh, seven children with four women” and all that,’ he said. ‘But I don’t care, man. I love all my kids. They’re all special and I wouldn’t have it any other way.

‘I don’t mean that in a morbid way but, because of the age difference between me and my wife, I really want to leave part of me with her, so there’s that as well.’

Most recently, Paul spoke out about the lessons he’s learned with age, saying he was ‘too arrogant and angry’ in his youth.

Speaking to Radio Times magazine this week, the rocker said that growing older changed his outlook, explaining: ‘I realise that the older I get – how lucky and fortunate I am to be able to do what I do.

‘It’s never really a chore. I mean, it is work sometimes, you’ve got to get stuck in. But the older I get, the more I love it, and the more appreciative I am of it.

‘When I was younger I was too arrogant or too angry or whatever.’