As hospitals and GP surgeries are bracing themselves for a severe flu outbreak, marathon world record holder Paula Radcliffe has backed a campaign urging at-risk groups to get the jab.

The 43-year-old Briton, who was diagnosed with exercise-induced asthma at 14, revealed that she was once hospitalised suffering pneumonia after getting the flu.

Older people and those with certain health conditions have raised chances of complications from flu including hospitalisation and even death.

Paula is calling on those eligible to get the vaccination for free on the NHS to not be complacent reminding us that even a world-class athletes like herself can succumb to the risks.

The message is particularly important now as a severe strain of flu that has caused huge problems in Australia and is thought to be heading our way – and the NHS is bracing itself for a surge in patients – particularly, the elderly.

VIRULENT STRAIN OF FLU FROM AUSTRALIA HEADING TO HE UK

The head of the NHS has warned that a strain of flu that has caused huge problems in Australia is thought to be heading our way.

Simon Stevens said that the h3n2 strain has been particularly severe in the elderly and children.

Australia – whose winter occurs during our summer – has just experienced one of its worst flu outbreaks on record with more than 100,000 cases, two and a half times the normal number.

Hospitals have been overwhelmed and ambulance services in some areas have been told to only attend the most urgent cases.

The flu season in the UK and the rest of the Northern Hemisphere tends to mirror what has happened in Australia and the Southern Hemisphere, and the same strains of the virus will circulate north.

Paula said: ‘When you feel fit and healthy it is easy to think that you don’t need to worry about having a flu vaccination.

‘But even someone as fit as myself can suffer with the flu because I have asthma as my stint in hospital with pneumonia on a nebuliser in 1993 shows.

‘You think that if you are unlucky enough to contract flu, your body will be able to fight it off.

‘However, even though I’m an athlete, and have my asthma under control, I know the consequences of flu could be serious.’

Paula, who has held the marathon world record for 15 years, said a number of times she’s had the flu it has developed into bronchitis.

‘I’ve been told is because of my asthma,’ she explained.

‘In 1993, I actually missed the trials for the World Cross Country Championships because I was so ill, despite the fact I’d been eating healthily in an effort to boost my immunity. 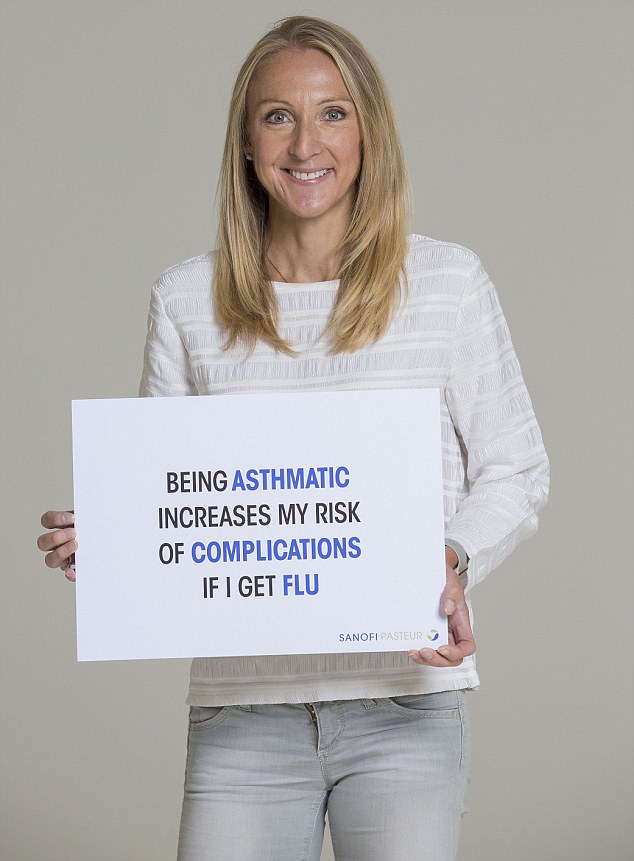 The 43-year-old, who had pneumonia after having the flu said: ‘I know the consequences of flu could be serious’ 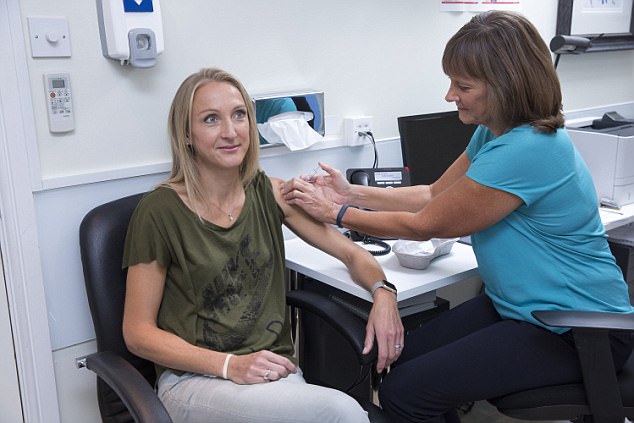 PEOPLE WHO SHOULD HAVE THE FLU JAB

The injected flu vaccine is offered free of charge on the NHS to people who are at risk. This is to ensure they are protected against catching flu and developing serious complications.

You are eligible to receive a free flu jab if you:

Front-line health and social care workers are also eligible to receive the flu vaccine. It is your employer’s responsibility to arrange and pay for this vaccine.

‘That taught me about the importance of being vaccinated against flu, so I’m teaming up with [pharmaceutical company] Sanofi Pasteur to help encourage people like me in at-risk groups to take the risks of flu seriously and get vaccinated this winter.’

She said: ‘I normally have two puffs of my reliever but sometimes I increased this dose, especially if it is hay fever season or there is more air pollution.

‘And I know I have to take it easy and ease off training if I have a cold.’

People with long-term conditions such as asthma, diabetes, heart disease, chronic obstructive pulmonary disease (COPD) and autoimmune conditions are more at risk of getting serious complications from flu.

Past studies have shown up to nearly 60 per cent of healthcare workers experience flu infections without classic symptoms.

GP Radha Modgil said: ‘Vaccination is important for front-line healthcare professionals to help reduce the risk of transmission of the virus to others, including family, friends, colleagues and patients.’