Paulina Gretzky jets to Paris to join Dustin Johnson at Ryder Cup, putting to rest rumors of a split

Paulina Gretzky is back with Dustin Johnson.

The pair were both seen in paris on Wednesday ahead of the Ryder Cup, the annual golf match between the United States and Europe.

Gretzky was seen enjoying a tour of the city with fellow golfer girlfriend Jena Sims, who dates Brooks Koepka, and Kelley Cahill, who is engaged to Jon Rahm.

That snap showed Gretzky lounging on a bed eating croissants and sauteed mushrooms while noting the temperature was just 51F, far cooler than it is in California where she and Johnson have a home.

There had been rumors that the couple was set to split after Johnson allegedly had an affair with a socialite.

That is not the case however it seems for Gretzky and Johnson. who became engaged after just seven months of dating back in 2013 and have two children: 3-year-old Tatum and River, who just turned one in June.

Together again: Paulina Gretzky is in Paris for the Ryder Cup, reuniting her with fiance Dustin Johnson after rumors he had an affair (couple above at the 2016 Ryder Cup) 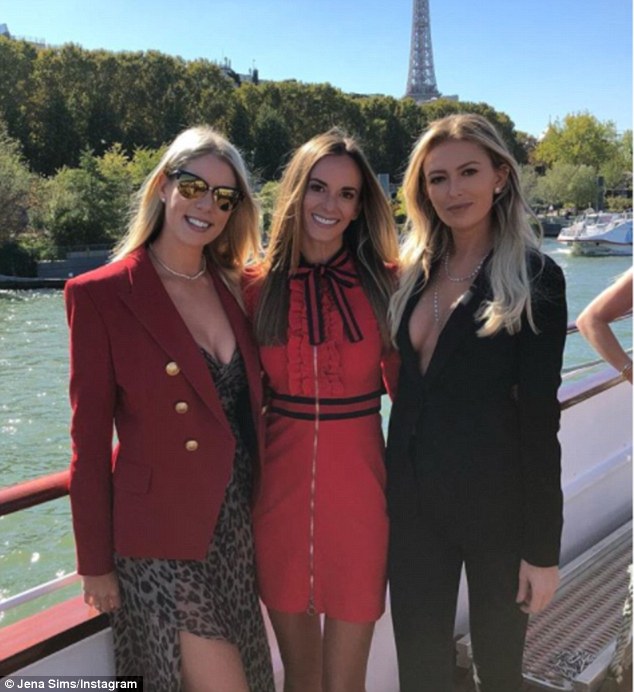 Seeing the Seine: Gretzky (right)was seen posing for a photo with with fellow golfer girlfriend Jena Sims (center), who dates Brooks Koepka, and Kelley Cahill (left), who is engaged to Jon Rahm 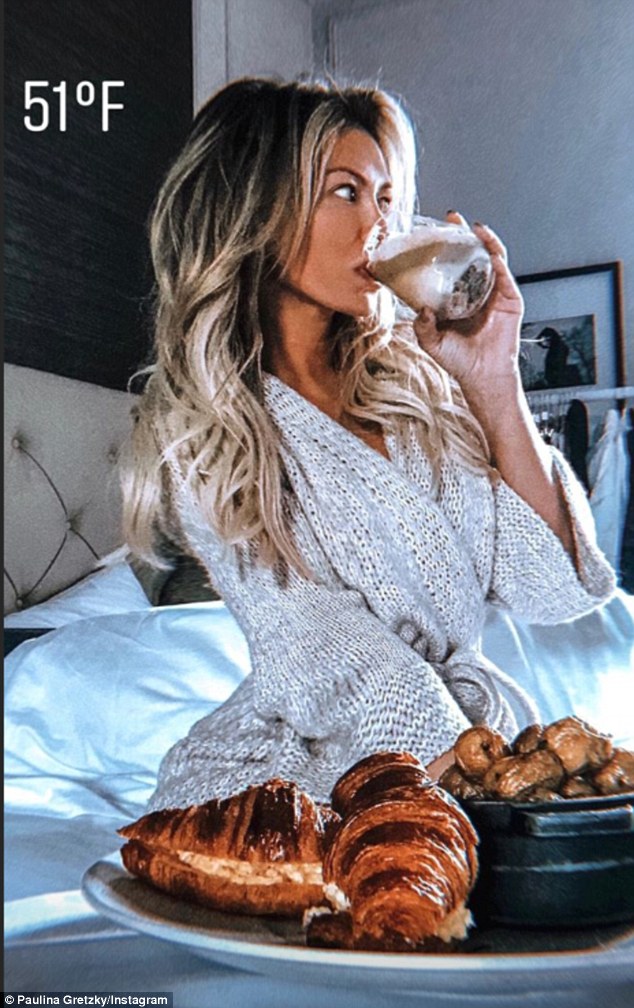 Shrooms: Gretzky posted a pic of herself lounging on a bed eating croissants and sauteed mushrooms while noting the temperature was just 51F (above)

It has long been tradition that the wives and girlfriends of the players in competition attend the Ryder Cup.

Gretzky was by Johnson’s side the last time he appeared at the event, and in August of last year at the President’s Cup.

The speculation around Grtetzky’s decision has reached such a fever pitch that fans were even able to bet on the outcome.

Bovada was collecting bets, and ‘No’ had been the heavy favorite as this reunion did not seem to be in the cards just last week.

The model daughter of NHL legend Wayne Gretzky posted a video last Thursday that showed her laying in bed as the Dustin Lynch song ‘I’d Be Jealous Too’ played over the video. 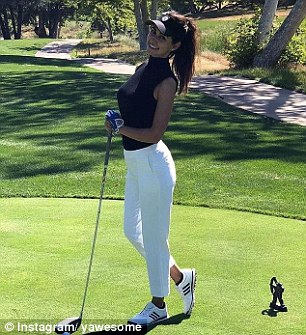 Fore bag: It was reported earlier this month that Johnson had been enjoying the company of 39-year-old Yassie Safai

Her decision to select that song in the wake of rumors that her longtime boyfriend had an affair with a young socialite only served to fuel speculation about the pair’s relationship.

It was reported earlier this month that Johnson had been enjoying the company of 39-year-old Yassie Safai.

That allegation was then followed by the false claim that Gretzky, 29, had deleted Johnson, 34, from her social media.

Gretzky has not however scrubbed her Instagram profile of Johnson, despite the reports from a number of outlets.

In fact, Johnson pops up frequently in two of the three tagged Instagram stories that Gretzky has saved at the top of her page.

The two are seen downing shots, lounging around in swimsuits and cuddling up to one another as they fly private.

Safai and Johnson were both quick to respond, but offered up markedly doferet statements.

‘Every relationship goes through its ups and downs, but most importantly, we love each other very much and are committed to being a family,’ said Johnson on Twitter.

‘Thank you for your love and support.’ 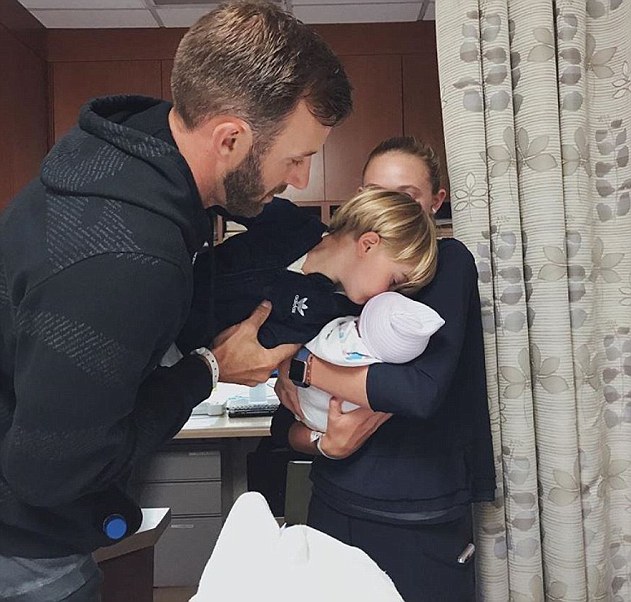 Little ones: Gretzky and Johnson became engaged after just seven months of dating back in 2013 and have two children: 3-year-old Tatum and River, who just turned one in June (above in June 2017 after River’s birth) 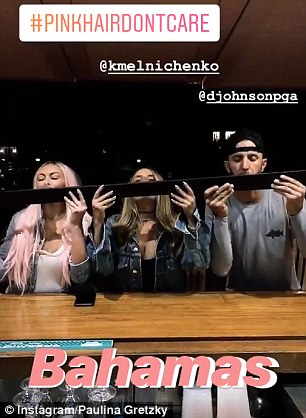 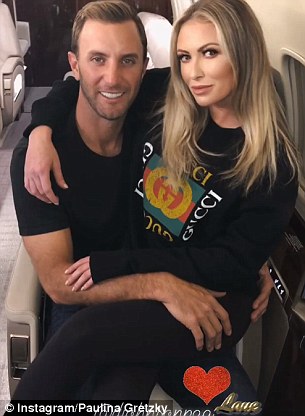 No sctbs: Gretzky has not scrubbed Johnson, 34, from her Instagram account however in the wake of these rumors and he still appears in her saved stories (left and right in stories from 2018)

Through the wire: ‘Every relationship goes through its ups and downs, but most importantly, we love each other very much,’ said Johnson (above on Twitter)

Johnson has not spoken more on the matter at this time, while Safai issued a far longer statement.

‘I am sure he is a great person but we do not have a close friendship,’ she said of Johnson, admitting they had crossed paths a few times at their country club.

‘I have never met Paulina Gretzky and do not know the Gretzky family, but again, I am sure they are great people.’

She continued: ‘I have no insight into the rumors around Dustin Johnson and Paulina Gretzky relationship. I wish them nothing but the best. I just want to go back to living my normal life.’

Safai then disappeared from public eye while Gretzky got back to work practicing for the Ryder Cup, which begins tomorrow.