Pauline Hanson has has had a busy few days – she’s confirmed that One Nation will support the governments company tax rate cuts and announced her previous nemesis Tony Abbott will launch her upcoming book.

Speaking to Sky News, Hanson said the decision to support the Turnbull governments company tax cut came after ‘a lot of deliberation’.

‘I’ve travelled around Australia quite extensively. A couple of weeks ago I was in Western Australia and I went to Fortescue Metals, had a good long talk to Twiggy Forrest, and other businesses I went to through Queensland, plus the other states.’ she said.

Senator Hanson caused audible gasps of shock when she wore the full Islamic dress into Question Time, in 2017, calling for the dress to be banned in Australia. She is releasing a book this week of her speeches

‘They’re either going to shut down or go off-shore. They cannot continue with the escalating energy costs, gas and electricity. They have to have some relief or they’ll put workers off and they’ll start bringing in their families or doing longer hours themselves, we can’t keep going the way that we’re going.’

The government has been trying to push through the bill, which cuts the cooperate tax rate from 30 percent to 25 percent, through parliament this week.

Opposition Leader Bill Shorten has accused Mr Turnbull of planning to give big businesses a tax handout while hitting Australian workers with a Medicare levy increase.

Senator Hanson will also be publishing a collection of her political speeches this coming week.

In a bizarre twist that demonstratives the fickle nature of allies and foes in federal parliament she has chosen former Prime Minister Tony Abbott to launch the book.

She revealed she made a ‘cheeky’ request for the former prime minister to launch a new collection of her political speeches. 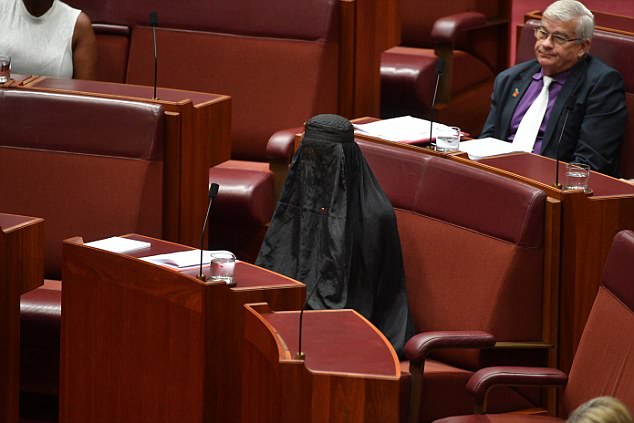 She has announced that Mr Abbott, her previous nemesis will launch her book of speeches

Mr Abbott will do the honours in Canberra on Tuesday – more than 14 years after Senator Hanson was released from prison and said, ‘Heaven help this country if Tony Abbott is ever in control of it. I detest the man.’

Senator Hanson says she asked Mr Abbott to launch her book because they are similar in some ways, and because he was among the first to congratulate her on her re-election to federal parliament in 2016.

‘I said to Tony over the phone ‘I’m going to be a little cheeky with this question’ and he laughed and said ‘yes’ to launching my book,’ she told AAP in a statement.

‘Tony Abbott strangely has a few similarities to myself. We’ve both seen the highs and lows of this place and I’m not a person to wallow in self pity over the past.’ 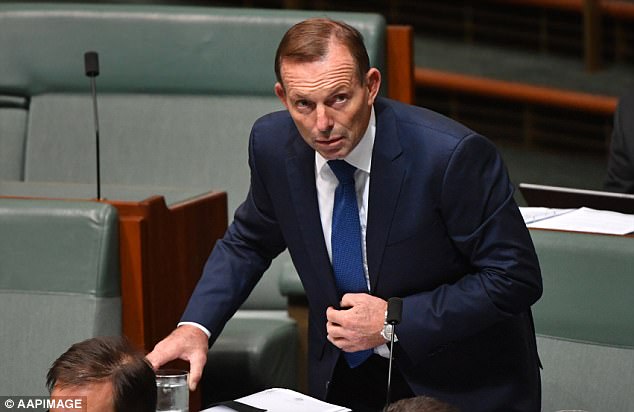 Mr Abbott’s office said he was ‘delighted’ to accept Senator Hanson’s invitation, and that One Nation voters deserve respect.

Senator Hanson has always blamed Mr Abbott for her brief imprisonment for electoral fraud, a conviction that was later quashed.

Mr Abbott was behind a trust fund set up to fund civil cases against One Nation in the 1990s, when the party posed a threat to the Liberal Party.

Senator Hanson and One Nation co-founder David Ettridge served 11 weeks of a three-year jail sentence after being convicted of electoral fraud in 2003. The convictions were later overturned on appeal.

Their relationship has thawed in recent years and Mr Abbott made headlines when he stopped by Senator Hanson’s parliamentary office for a coffee, to welcome her back to parliament in 2016. 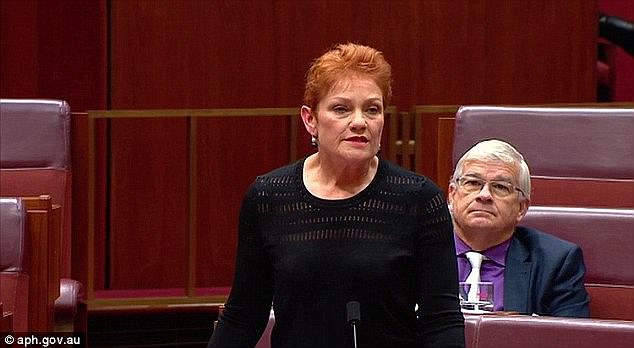 The cover of the new book, Pauline, In Her Own Words, features the One Nation leader peeking out from beneath a burqa.

It’s a nod to her controversial stunt when she wore a burqa into the Senate chamber in August last year.

She later said she wasn’t embarrassed and she did it to spark a debate about security challenges posed by the burqa, adding she was able to walk into the chamber without being challenged. She wants the burqa and other full face coverings banned in public.

The stunt drew a stinging rebuke from then attorney-general George Brandis, who said mocking religious garments was an appalling thing to do.