Pauline Hanson has unleashed on Olypmic athletes the Matildas after they posed with the Aboriginal flag at the Tokyo Olympics.

The Australian women’s soccer side posed with the flag ahead of their Olympic Games opener against New Zealand in Tokyo on Wednesday night.

Ms Hanson claimed the moment was ‘a slap in the face to all Australians’ and accused the team of ‘hijacking’ the sporting competition.

The One Nation leader claimed the gesture was a ‘token’ effort to be politically correct.

‘Australians are sick and tired of their favourite sports being ruined by politics,’ Ms Hanson wrote in her press release on Friday.

‘Indigenous flags don’t represent all Australians. There’s only one flag which truly represents all of us.’

After they posed with the flag, The Matildas then stood arm-in-arm on the halfway line as their Kiwi opponents dropped to one knee in a show of support against racism prior to the kick off.

But Ms Hanson said the gesture was designed to ‘inflame division’ rather than promote solidarity. 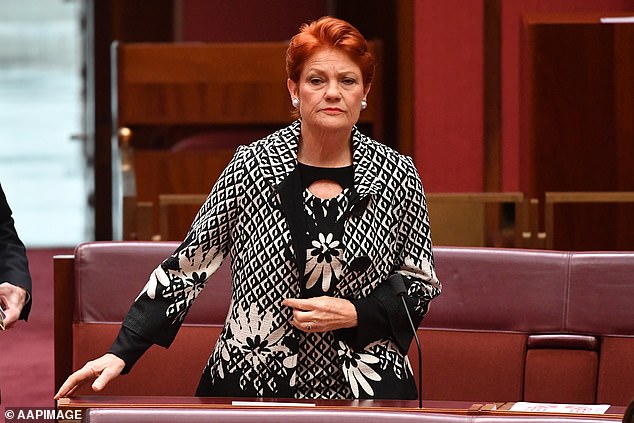 ‘Australians supporting their Olympic team deserve an explanation from the Australian Olympic Committee, and I’m sure they want to know what the Prime Minister has to say about it too.’

The Aboriginal flag was declared by law as the of the official flags of the nation in 1995.

Viewers watching back home appreciated the inclusive gesture, but some also questioned why the team chose not to pose with the Australian flag.

‘Hey Matildas.. you represent Australia. The Aboriginal flag is not the Australian flag,’ one fan wrote.

Another added: ‘I absolutely love watching the Matildas play but why the hell did they display the Aboriginal flag and not the Australian flag? It is such a strange, divisive situation for a country to have two flags in my opinion.

Others accused the Matildas of making a political statement.

‘When will sport just be about getting on and playing sport, yes I agree statements need to be made about political issues but there is a place for that to happen surely,’ one viewer commented. 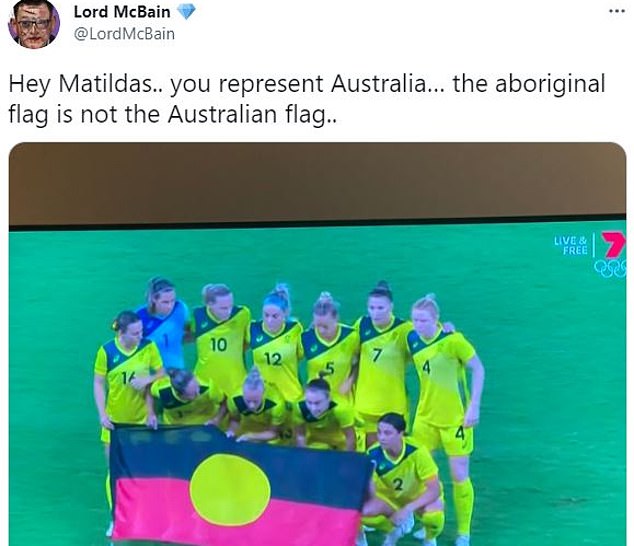 Another questioned why the Matildas also didn’t take a knee prior to kick-off.

‘Lots of questions about the Matildas at the Olympics. Strong choice in not holding the Australian flag only the Aboriginal flag, but then not taking a knee like their NZ counterparts. Anyone know why or did I miss it?,’ one woman tweeted.

But many viewers were pleased to see the Aboriginal flag on display.

‘Well done Matildas for standing arm in arm in a show of unity and togetherness for all Australian cultures , if only those who kneel new the true value of equality,’ one fan wrote.

Matildas captain Sam Kerr defended the gesture after the match and said decided on  consultation with fellow indigenous members in the squad.

‘We are really proud of it,’ the star striker said following the 2-1 win against the New Zealanders. 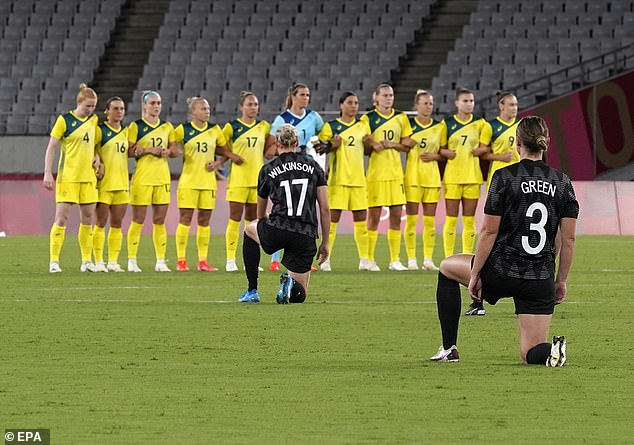 ‘It’s something we spoke about a lot as a team.

‘We let the Indigenous girls drive it.’

Australia takes on world number five ranked Sweden in their next clash on Saturday who caused a massive upset on Wednesday night by defeating gold medal favourites USA 3-0. 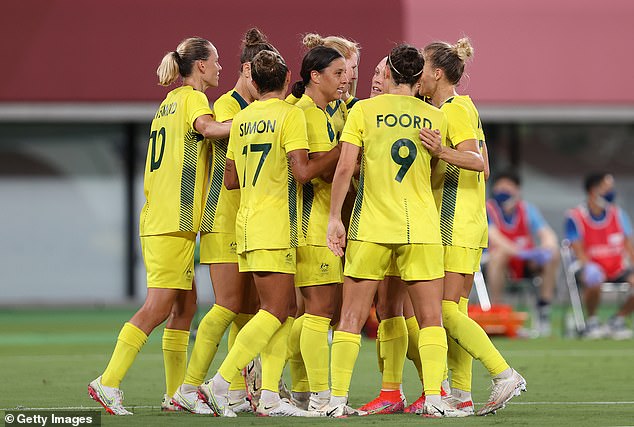