A Brexit deal could be agreed as soon as Christmas – but only if the UK pays £48bn, EU leaders said on Friday.

In a meeting held after Theresa May attended a Brussels summit, EU leaders gave the order to prepare for a trade deal.

However the talks will only go ahead if the Prime Minister agrees to pay the eye-watering sum, according to reports.

An unnamed senior diplomat told The Sun that leaders would accept £30billion for future commitments. Along with the 18billion offered for the transition period between 2019 and 2021 this would amount to £46billion.

New of the possible deal comes after  Emmanuel Macron threw cold water on hopes of a Brexit breakthrough – warning that the UK’s divorce bill offer was not even ‘halfway’ to what the EU wanted.

The French president delivered a grim assessment of the standoff, saying Theresa May would have to make more significant concessions for trade negotiations to be able to start in December.

Last night it emerged that formal talks on a comprehensive free trade deal with the EU could begin as soon as next month. 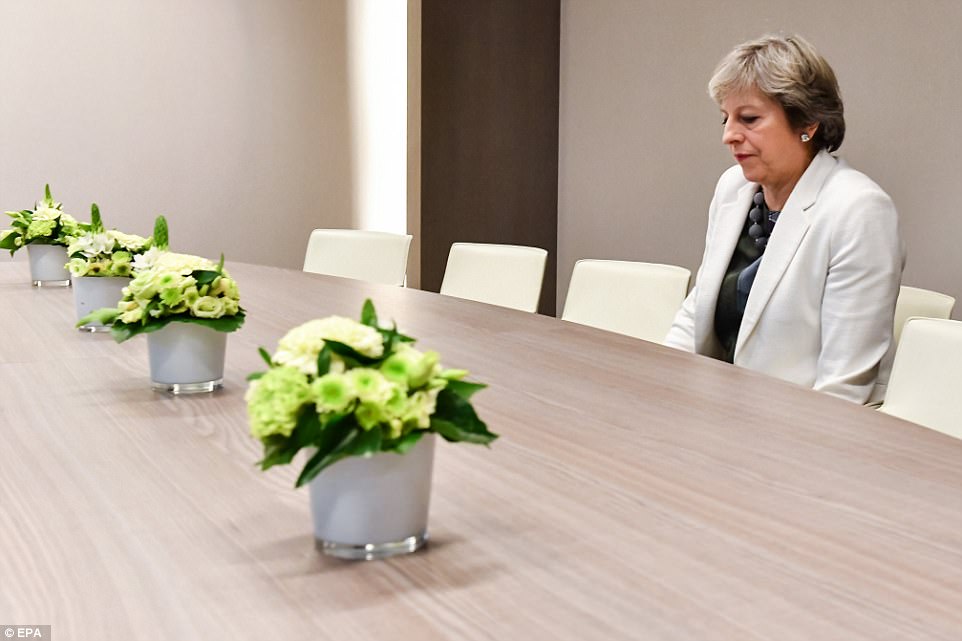 In a breakthrough for Theresa May, the EU said it was starting work on its negotiating stance on trade immediately.

Donald Tusk, EU Council president, said he was ready to receive British proposals for a trade deal – despite the fact EU leaders ruled yesterday that there had not yet been ‘sufficient progress’ on the ‘divorce bill’.

The move came amid growing concern on the Continent about the possibility of a messy split from the UK, the EU’s biggest trading partner.

Belgian economy minister Kris Peeters said a no-deal Brexit could cost 1.2million jobs across the EU and have a ‘catastrophic’ effect on his own country. He said the figures, from an official Belgian study, showed ‘how important it is to reach a deal’.

German chancellor Angela Merkel yesterday said she was hopeful of beginning formal trade talks with the UK in December.

EU officials told the Daily Mail an informal summit in Gothenburg on November 17 could be expanded to include discussions on trade and a two-year transitional deal.

Dutch prime minister Mark Rutte said Mrs May’s Brexit presentation to EU leaders on Thursday night had been ‘helpful’ – and revealed they had told her: ‘You might want to see us in Gothenburg.’

A senior EU official said: ‘Of course we can have a meeting before December. It truly depends on whether there will be any step [forward] on the UK side or not.’

Rapid progress will depend on the Prime Minister providing fellow leaders with more detail on how much she is willing to pay in a ‘divorce’ settlement. Mr Rutte said the EU needed ‘more meat on the bone’ about Mrs May’s pledge to ‘honour our commitments’ to the EU.

But Mrs Merkel struck an upbeat note, saying there were ‘zero indications’ that the talks would end without a deal. She added: ‘I truly want an agreement – and not an unpredictable resolution.’ 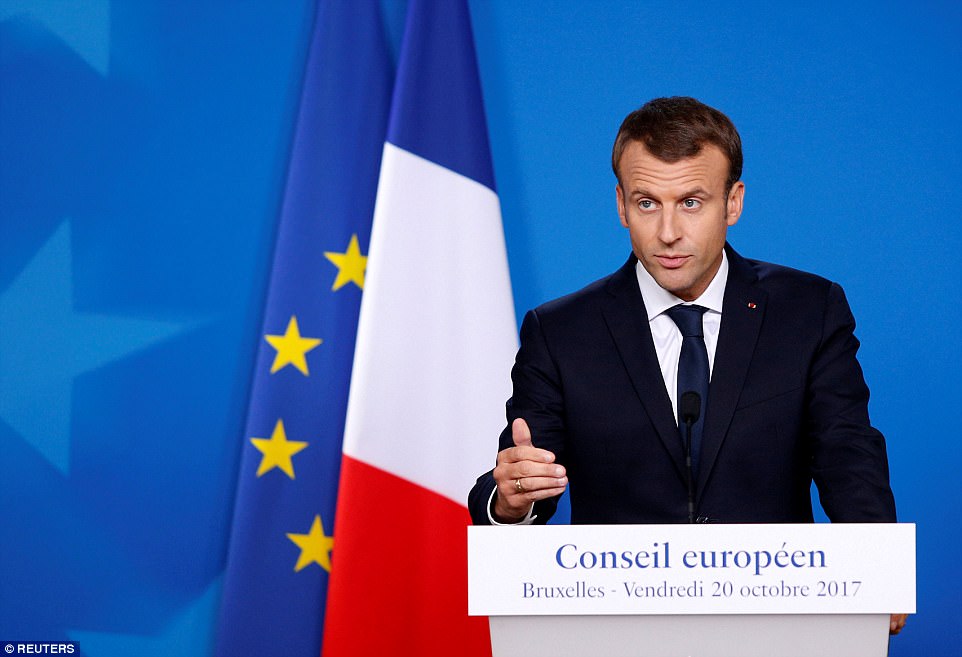 The French president delivered a grim assessment of the standoff today, saying Theresa May would have to make more significant concessions for trade negotiations to be able to start in December Mr Macron struck a significantly harder tone on Brexit than his fellow leaders, who appeared optimistic about a deal

Wrangling over cash is the stickiest problem and have held up trade talks.

The EU is demanding 60 billion euros – the equivalent of £54billion.

Theresa May agreed to pay 20 billion euros (£18billion) for the current EU budget in return for a transition deal.

The PM said Britain is prepared to meet its ‘obligations’ but what precisely these are is a matter of dispute.

Theresa May has tried to settle the issue to provide certainty to the 3.2 million EU nationals living in the UK and the 1.2million Brits living on the bloc, but the EU has refused.

The British think the EU are stalling on an agreement to squeeze more money.

This week the PM wrote an open letter to EU nationals reassuring them that a deal is ‘within touching distance’.

The EU and UK do not want to see a return to a hard Irish border fearing it would endanger the peace process.

But the UK says the practicalities on how to maintain a soft border when the UK leaves the customs union means the issue can only be settled if they move on to trade talks.

The PM wants a two-year transition deal and conceded EU judges will have power over the UK during this time.

But Europe wants more clarity on whether she will accept all parts of EU law and regulation.

The German leader conceded for the first time that the EU will have to make concessions from its rigid negotiating position, saying: ‘I see the ball not only in the UK’s court.’

But she warned that the divorce bill had been ‘dominant’ in discussions – and that trade talks were likely to be ‘much more difficult’.

EU leaders offered Mrs May the olive branch on trade after she warned them her political weakness at home meant she could not be pushed much further.

The Prime Minister is under pressure from Tory Eurosceptics to pull the plug on the talks if they drag on for much longer and to prepare the UK to leave without a deal.

In a presentation over dinner in Brussels, she urged fellow leaders to give her a deal ‘we can defend to our people’. Some EU leaders are said to fear they could end up having to negotiate with Boris Johnson or even Jeremy Corbyn if they allow Mrs May to fail.

The Prime Minister yesterday said Brexit negotiations still had ‘some way to go’. But officials were privately encouraged by the breakthrough in talks, which the EU’s chief negotiator Michel Barnier this month warned were ‘deadlocked’.

Tory MP Michael Fabricant said last night: ‘We always knew the EU would play for time and try and bargain for as much cash as possible … But the EU needs trade too.’

In a sign of the tensions Brexit is causing in Brussels, Mr Tusk questioned Mr Barnier’s assessment, saying: ‘After Prime Minister May’s intervention last night and our discussion about Brexit this morning, my impression is that the reports of the deadlock between the EU and UK have been exaggerated.’ But Jean-Claude Juncker claimed he ‘would have used the word deadlock four times, not only three times’.

The European Commission president added: ‘I hate no deal. I want a fair deal with Britain.’

Mr Tusk yesterday said: ‘I would like to assure our British friends that in our internal work we will take account of proposals presented.’

This will allow UK officials to influence a deal much earlier than expected. The EU’s 27 remaining members took just 90 seconds to approve the so-called ‘scoping’ work in preparation for possible talks.