A coastal Venetian river where tourists once cruised in canoes and pedalos is reopening after receiving £2.7million.

It was abandoned for a decade and people flocked to the grand opening earlier this year – highly anticipating the revamp of the boating lake and other features of the holiday resort.

Nearly 20,000 flowers were planted and a 1920s cafe is being restored to its former glory by a charity dedicated to getting unemployed people back into work. And 78 people had contributed a total of 1,290 volunteer hours to the National Lottery project, according to statistics in April.

The Waterways includes the Venetian Waterways, Ornamental Gardens and Boating Lake which are connected by interlinking walkways.

Great Yarmouth’s Venetian Waterways is set to become a blast from the past after completing the 10-month renovation work. A boat packed with children enjoy a fun-filled ride around the Venetian-style water gardens in the Norfolk town, circa 1980s. Meanwhile others rest their eyes and bask in the sun

Norfolk punters are being given the chance to breathe life back into this seaside garden and to meander through the ornate gardens again – which were designed by S P Thompson in 1928.

They took part in an easter egg hunt, bonnet parade and duck race during the exciting grand opening in April.

When volunteer Clare Cooper brought her father for a preview, ‘he cried his eyes out’, she told The Guardian. 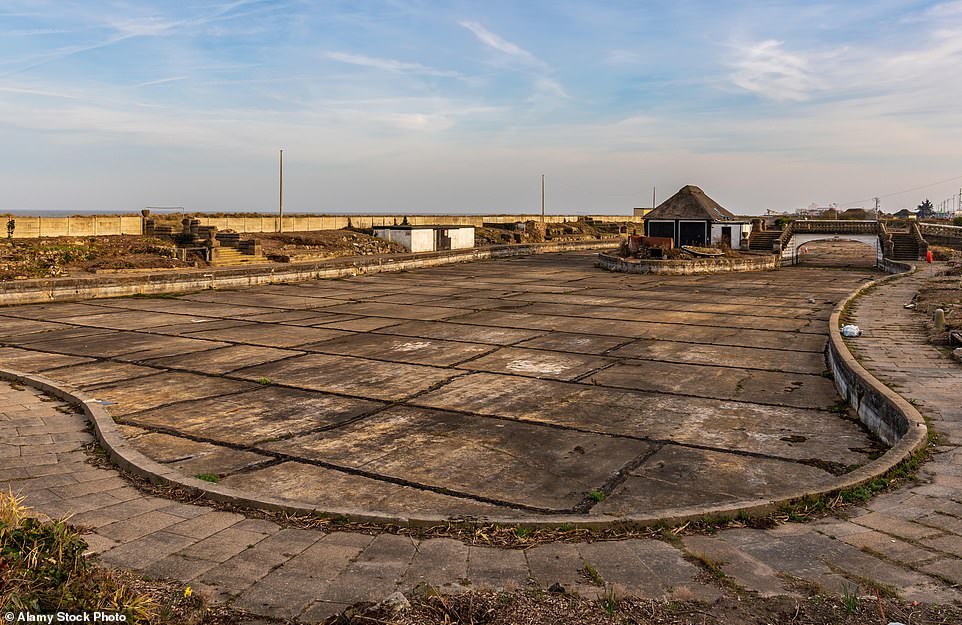 Austere: The once thriving canoeing destination is seen drained of water and lacking any sign of life as people make a start on its restoration earlier this year 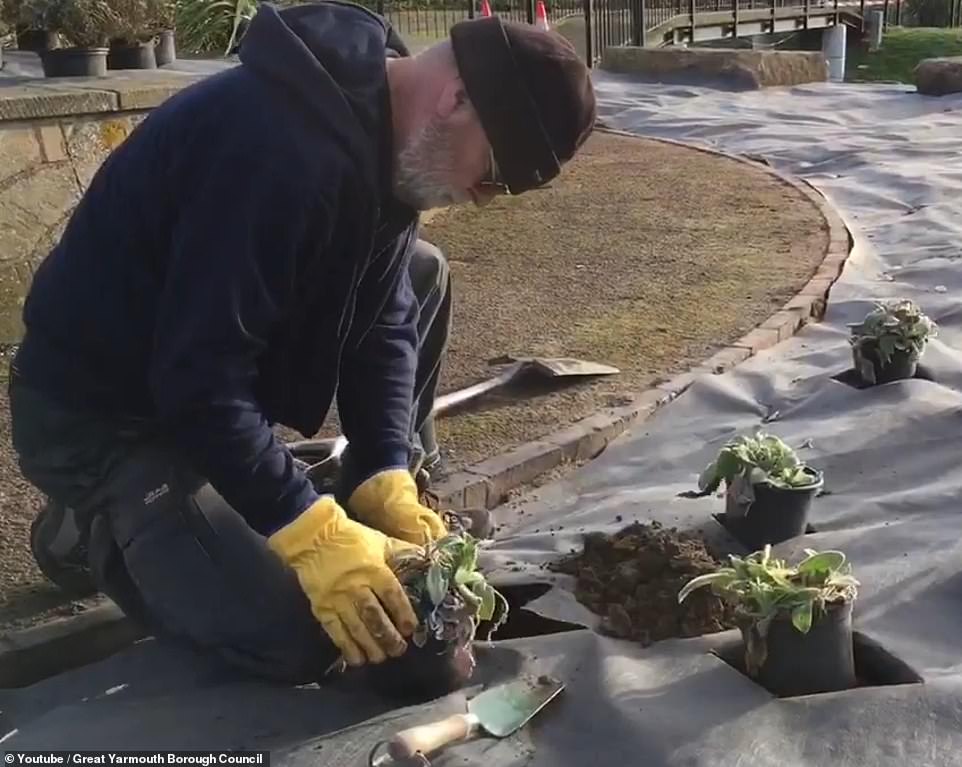 Here a member of Yarmouth’s Council is pictured planting flowers and hopes to give the Grade-II listed site a new lease of life. A total of 1,290 volunteer hours were given, according to April statistics

Jean shared her British seaside memories with Our Great Yarmouth: ‘We used to stay in caravan at Northdenes, used to play in sand dunes all day. Remember my little cousin nearly falling in water one year, trying to get into boat; many happy memories. Still try to come back most summers, but bring grandchildren now.’

Kerry Andrews travelled for the grand reopening with her three grandsons and said ‘it is great to have something like this looking brand new again’.

The revamp ‘looks magnificent’ and ‘lots of people have been admiring it’, according to Borough Mayor Mary Coleman. 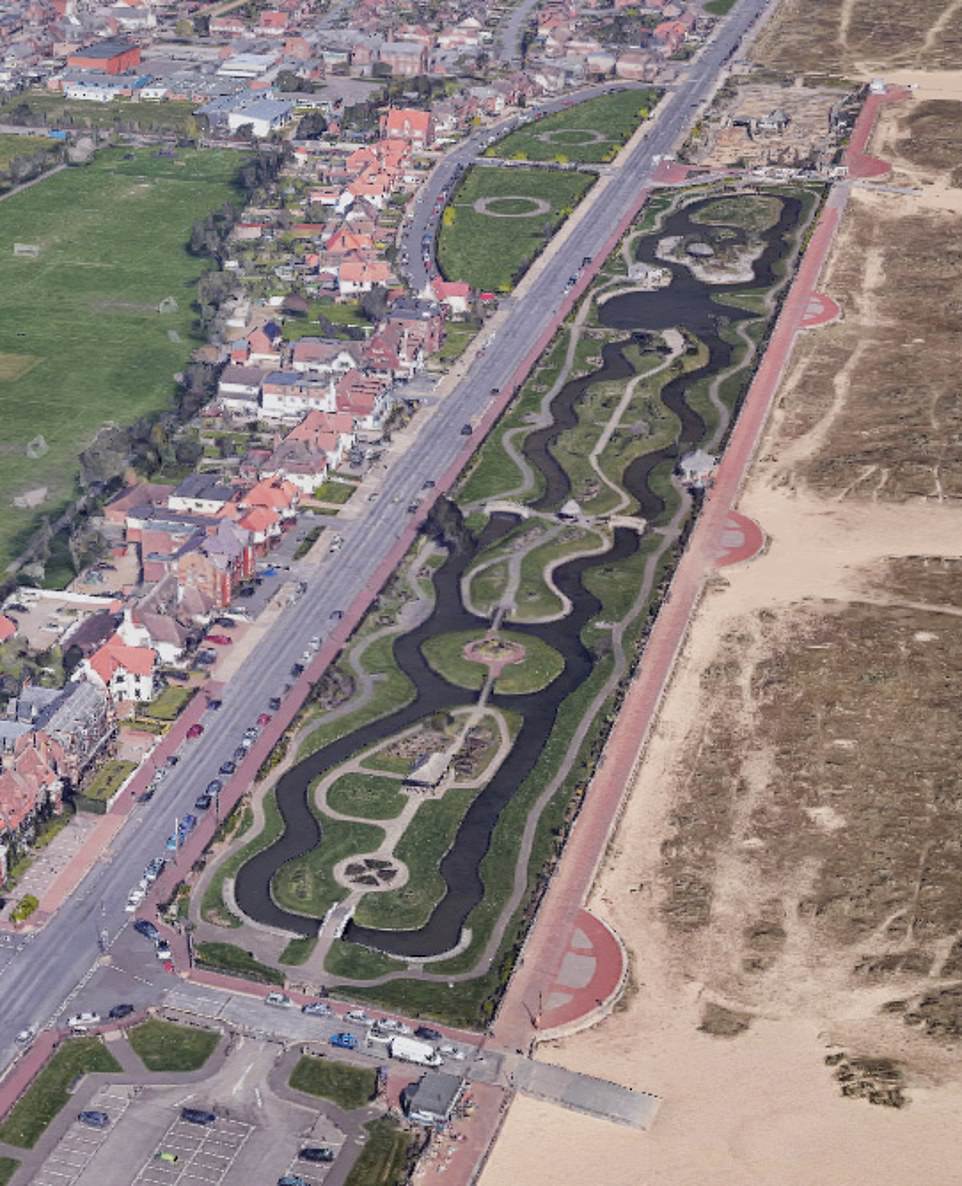 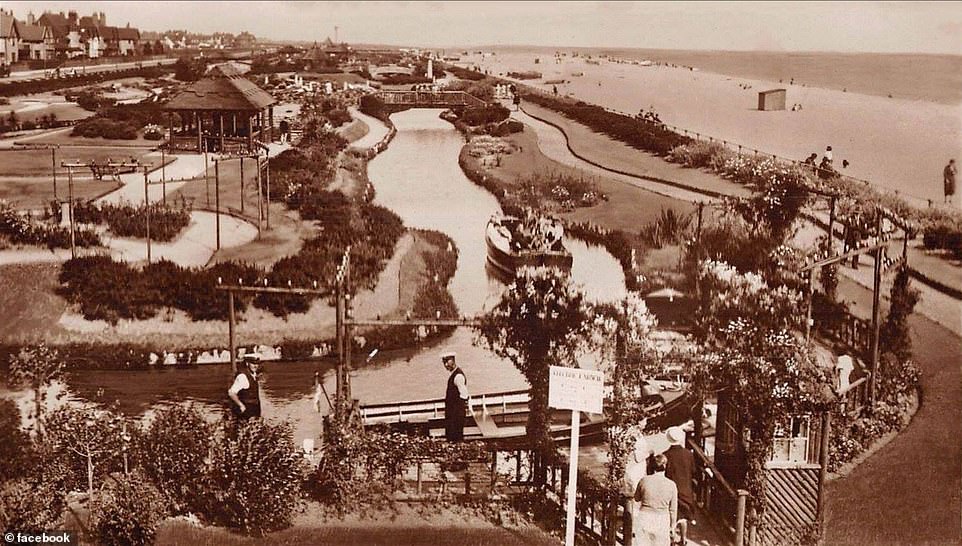 The best of the British seaside: People form an orderly queue for the canoes in this archive photograph. The meandering canal was popular and attracted people from all over the UK 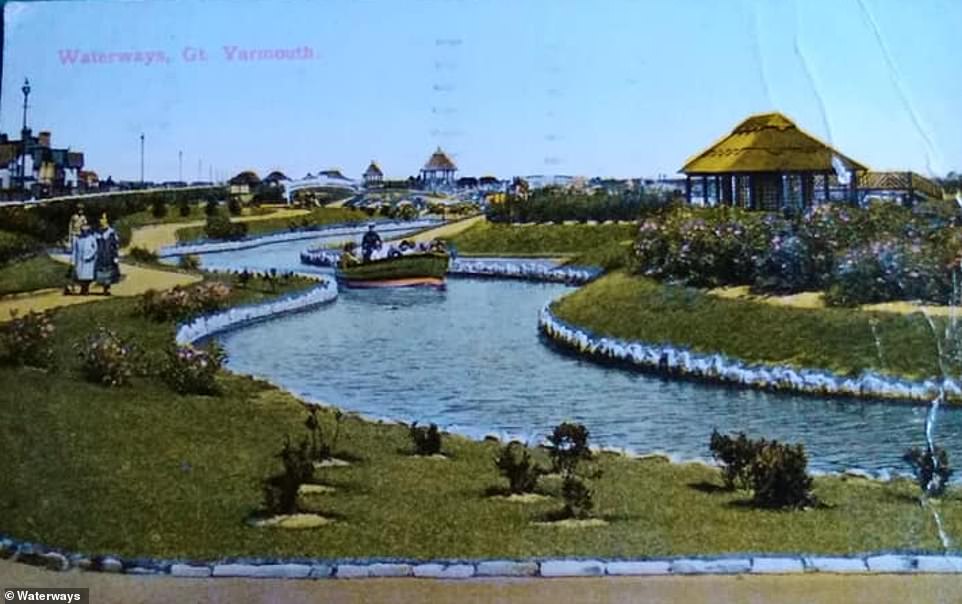 ‘Many happy memories’: People have spoken about fondness of the seaside resort where they have spent summer holidays when they were children. The revamp ‘looks magnificent’ and ‘lots of people have been admiring it’, the Borough Mayor Mary Coleman said 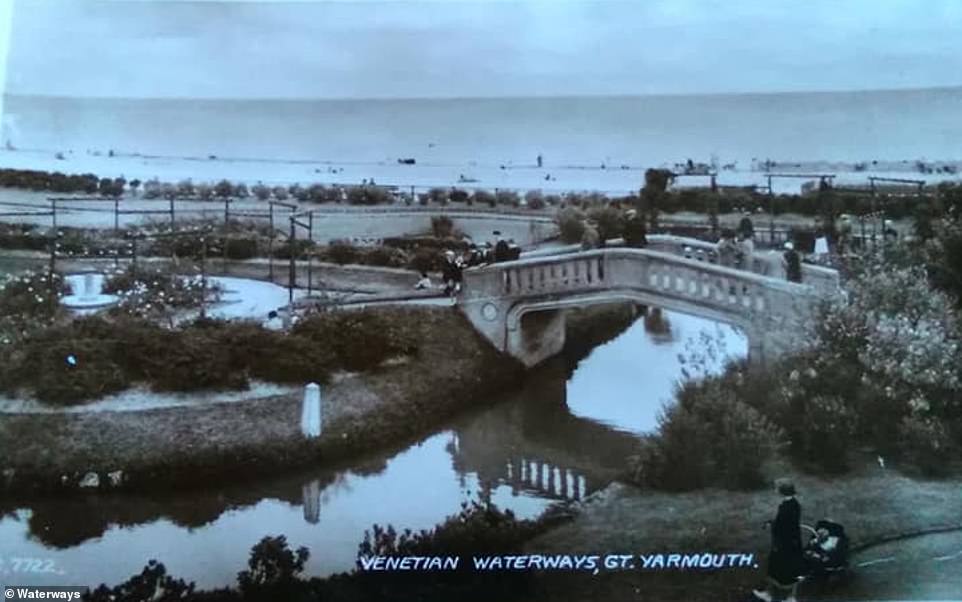 A Facebook group shares their postcards of the Venice-inspired gardens at the waterways.  Here a woman is pictured looking across the river with her baby 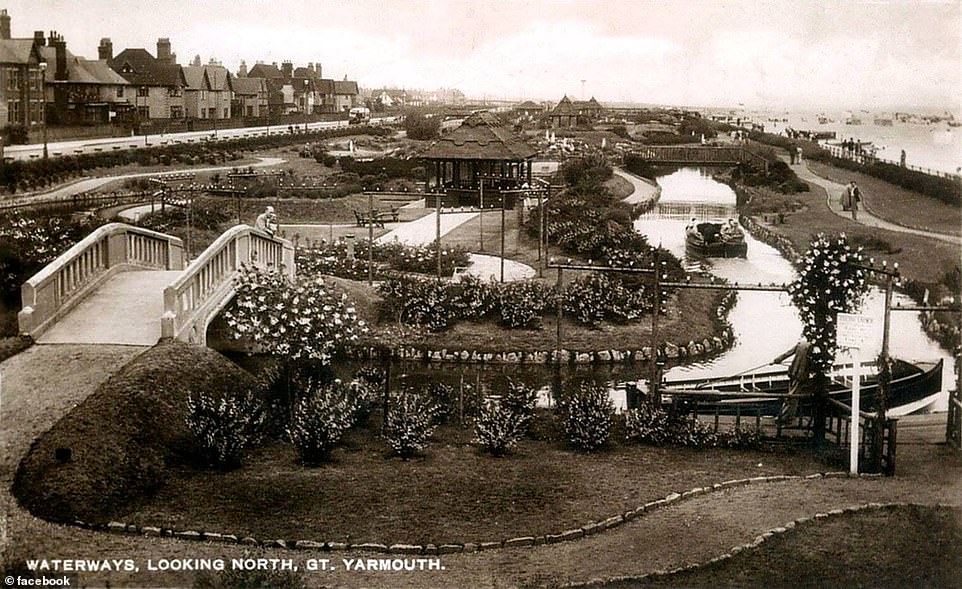 A couple gaze across the bridge as people wander along the winding paths. It was a much loved spot for all as many people travelled for the grand reopening with their grandchildren and wanted to share their stories. Kerry Andrews said: ‘It is great to have something like this looking brand new again’.

She admitted to the Great Yarmouth Mercury that there is still lots of work to do but she is ‘thrilled to bits’.

‘We have really been blessed with the weather. It really could not have been better.’

But the quaint English attraction has not always been like this – and was derelict from 2008 when the canals and pond were drained and the flowerbeds were ripped out.

It is built on a rich military history having been commissioned by the council in 1928 as a way to create work after World War One and the collapse of the town’s fishing industry.

‘Herring girls’ had the job of rolling up their sleeves and sorting out the day’s catch in the 1920s – and the industry was once booming that they would travel from Scotland and the Hebridean Islands. 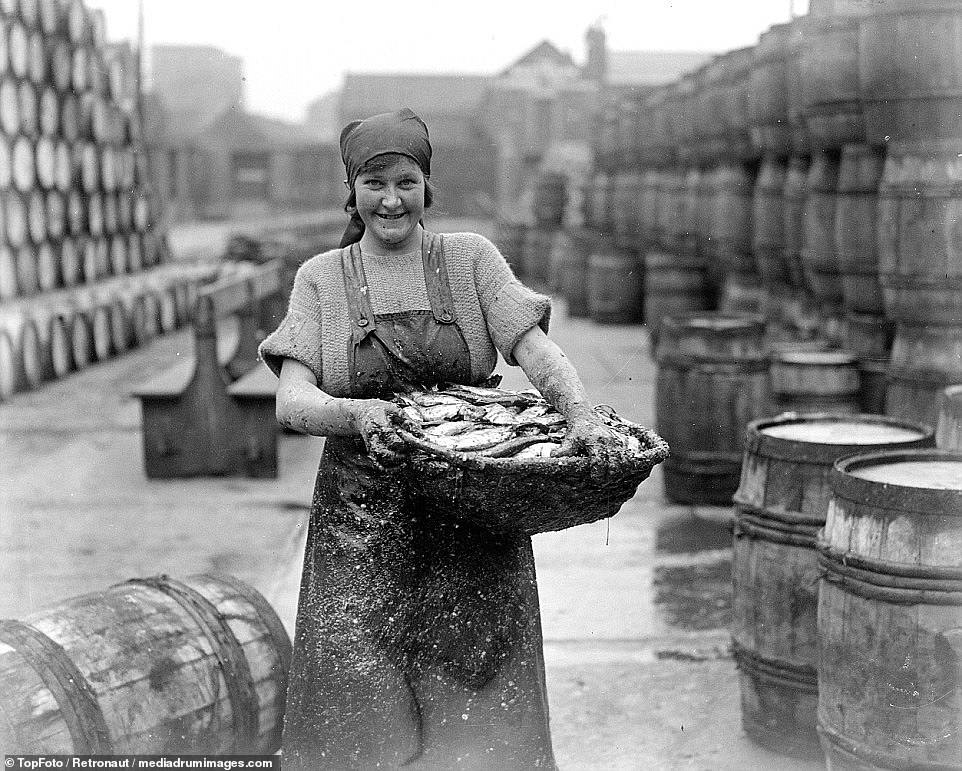 It was created in 1928 in an attempt to boost employment after the collapse of the Norfolk town’s fishing industry. Pictured is one of the ‘Herring Girls’ who rolled up their sleeves to sort out the catch of the day in the 1920s