A grandmother who avoided parties because she was obese and had nothing glamorous to wear is finally stepping out in style this New Year’s Eve – after losing 15 stone.

Gill Jenkins, 57, from Penarth, South Wales once hated socialising during the festive season as the only clothes which would fit her were baggy t-shirts and tracksuit bottoms.

At her largest she was a size 30 and weighed 24 st 10lb – but after taking control of her lifestyle, Gill is looking forward to turning heads at the countdown to 2018 as a svelte size 10.

She said: ‘It was like inside me there was a thin person trying to get out – there was always someone inside me screaming to be let loose – and here she is.’

Too embarrassed to go shopping for party clothes, Gill spent every Christmas watching TV in her pyjamas while her family and friends went out to parties.

But when her daughter Helen, 32, announced she was getting married, Gill decided she had to look the part of the mother of the bride and slim down, as well as finding a fancy hat.

Gill now tips the scales at 9st 12lb and lives on a diet of rice cakes and high-protein foods, having lost 65 per cent of her body weight.

Gillian Jenkins, 57, from Penarth, South Wales will be enjoying a New Year’s Eve party in a glamorous outfit after shedding 15 stone 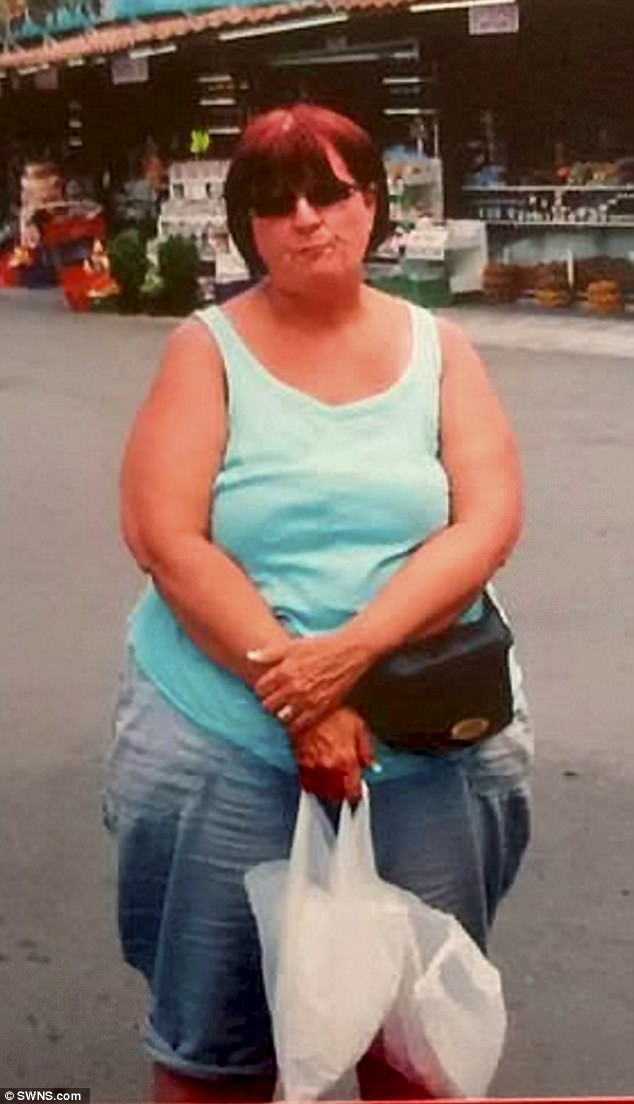 ‘I lost 15 stone – as much as another person’s body weight,’ she said. ‘I was heading for a heart attack or a stroke.

‘It is just like a new pleasure, having a hip size and being able to choose my clothes.

‘Shops just think if you are big, you are older – there’s nothing for a younger person.

‘It was a nightmare going out – finding something to wear that wouldn’t drown your shape, or fit you, was impossible. ‘I just used to come home from work and sit on the settee.’ 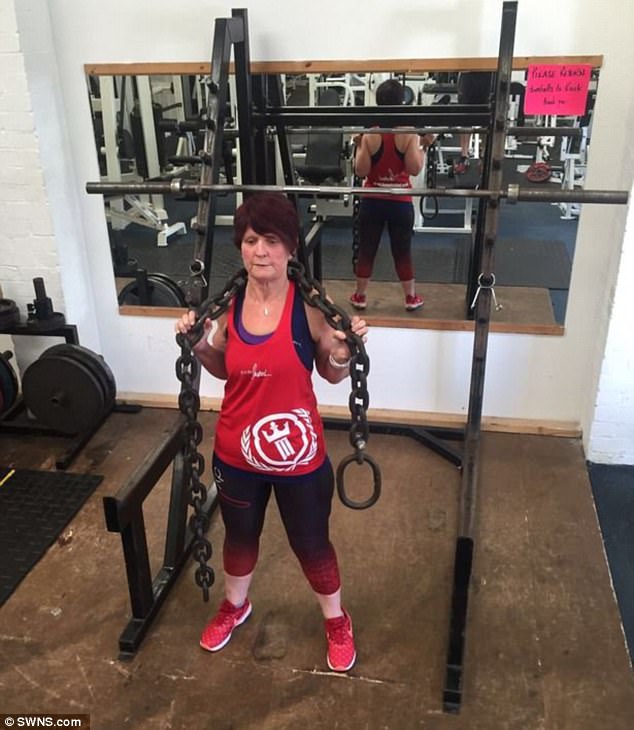 During her years of obesity, Gill would tuck into multiple bacon sandwiches before 10am, followed by a large quarter pounder meal from McDonalds and a cooked breakfast for dinner.

And she would drown her desserts in a full pint of cream – which she can no longer bring herself to eat.

Gill said: ‘I don’t like cheese anymore and I wouldn’t touch cream. Now I’m aware of carbohydrates and nutrients in food. I don’t need to eat it.’

When Helen announced she was getting married in 2010, Gill saw the two-year engagement as an opportunity to take control of her weight. 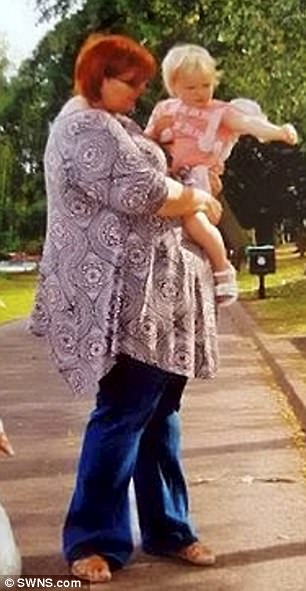 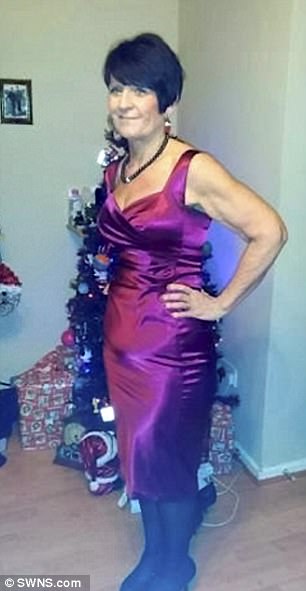 Gillian would avoid socialising because of her bulk, but now is wearing bodycon dresses for the first time 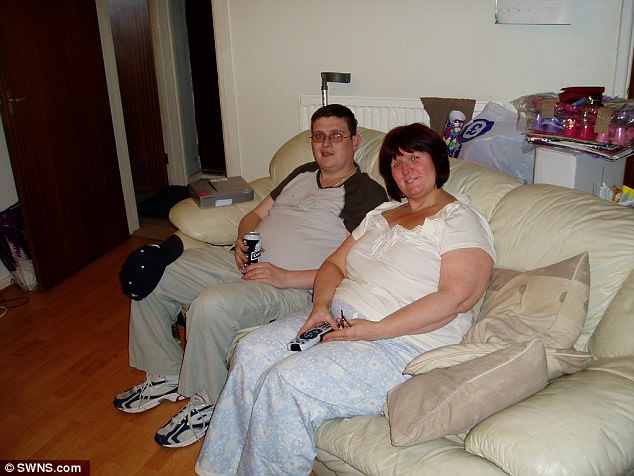 Gillian Jenkins pictured before her dramatic weightloss. She used to spend Christmas in her pyjamas in front of the TV as she was too embarrassed to go out

‘I was in denial – I wouldn’t look at myself in the mirror, or in shop windows,’ she said.

She began going to the gym – although her anxiety was so bad it made her palms sweat.

But soon Gill began to enjoy exercise and clamped down on snacking on biscuits, crisps and chocolate – which she now described as an addiction. 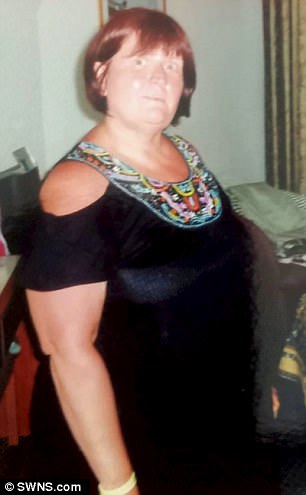 ‘I was big from when I was a little girl,’ Gill said. ‘Now, I eat what I want but I realise there are things I don’t need.’

Her husband Nick, 62, has watched his wife’s body shape change dramatically in their 40-year marriage and is proud of her newfound confidence.

‘Nick loves me fat or thin, he wouldn’t care. He’s really proud of me but it’s cost him a fortune in clothes,’ she added.

She now goes to the gym four times a week as well as a Zumba class, and works out with a personal trainer.

And sprightly Gil has even taken part in an Iron Man challenge, as well as running races.

A doting grandma to Lily, aged two, and Isla, aged 23 months, Gill loves to look after her ‘little angels’ and is sure she has prolonged her life span.

She said: ‘I’ve had a nice Christmas and eaten what I want, and now I’m back into training.

‘I’ve got such a busy social life that I’ve never had before.’

The shop assistant, who works in a fashion store, loves to browse clothes rails on her lunch breaks and takes pride in showing off her slim new body.

‘I’ve got masses of clothes and I wear things I never thought I’d wear,’ she said. ‘I love bodycon dresses – it’s such a new thrill.’