Penn Badgley is criticizing Hollywood studios for the lack of non-white and LGBT actors being cast in film and television industries productions.

‘Yeah, I actually really like that idea, I do,’ said Badgley.

‘I mean, I think there are a lot of people who would say, ‘Well, it’s actually and therefore…”

The actor trailed off at that point, before continuing: ‘Yes, I think theoretically the idea that anybody should be able to play anybody is true. That’s only in theory.’

Badgley then decided to go on step further and declare: ‘In reality, we have basically, like, privileged a** white people playing everybody, and so we need to stop that.’

Speaking out: ‘In reality, we have basically, like, privileged a** white people playing everybody, and so we need to stop that,’ Penn Badgley said in a recent interview (Badgley above in October) 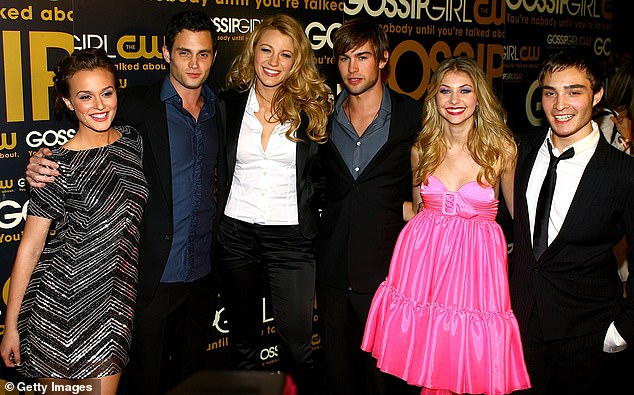 The actor said this despite the fact that he was promoting a show, Yes, whose leads are all white, and was previously part of the all-white Gossip Girl cast (l to r: Leighton Meester, Penn Badgley, Blake Lively, Chace Crawford, Taylor Momsen and Ed Westwick)

This is the first time Badgley has voiced this opinion, though it does not appear that it has ever resulted in him declining a project.

Many have been forced to address outcry over the lack of representation for actors in Hollywood, most notably Scarlett Johansson who elected to drop out of a production in which she was cast as a transgender man.

That move earned her the praise of GLAAD president Sarah Kate Ellis, who called the actress’ decision a ‘game-changer.’

Actions speak louder than words however for a handful of white actors in Hollywood.

Ellen Pompeo has used the industry clout she has earned over the course of her 15 seasons on the hit medical drama Grey’s Anatomy to make sure that any cast and crew she works with is a reflection of the diverse population she encounters when she steps off the studio lot.

And in the rare instances when she cannot control who appears on or behind the camera, she is not shy to address the issue.

In a recent interview with Net-a-Porter, Pompeo – appearing alongside Emma Roberts, Gina Rodriguez and Gabrielle Union – pointed out how homogenized the crew was at the shoot.

She did so in a matter-of-fact tone that was never condescending, and then took the time to explain why she believed it was her role to address the issue.

‘As Caucasian people, it’s our job. It’s our task, it’s our responsibility to make sure that we speak up in every single room that we walk into, that this is not OK, and that we can all do better,’ she said. ‘It’s our job because we’ve created the problem.’

Badgley got his big break in television with the show Do Over, which one for just one season and had a cast of all-white actors.

He then became a household name with Gossip Girl, a show whose leads were all white actors.

The program did add Jessica Szohr as a series regular after introducing her halfway through the first season, with the actress playing a character who provided the show with a much needed boost and tension.

And yet despite her talents, and natural chemistry with each member of the cast, Szohr was never given her own storylines independent from the original six leads and instead forced to serve as the perennial sidekick. 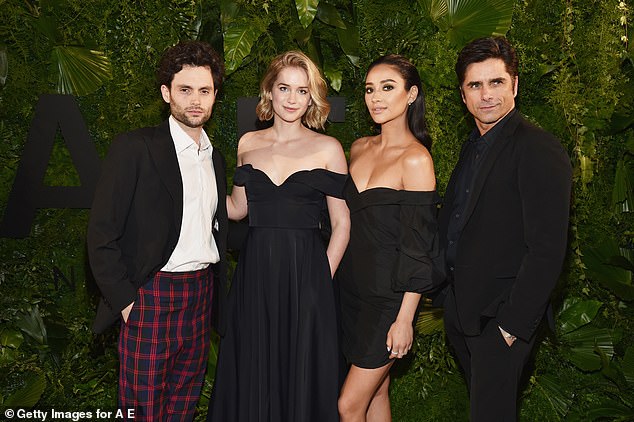 She fared better than the show’s other non-white characters, who tended to serve as archetypes, punchlines or fleeting love interests for the white male protagonists.

In his six years on the show Badgley also appeared in the films Margin Call, Easy A, The Stepfather and Greetings from Tim Buckley.

Only two of those films featured a non-white actor in a supporting role – Aasif Mandvi as an analyst in Margin Call and Marcuis Harris as a detective The Stepfather.

Gossip Girl and Easy A did both feature character’s who were revealed to be gay. In both cases, those characters were white males.

Badgley now stars in You, a series that once again features white actors in every leading role.

The show did have one non-white actress, Shay Mitchell, but her role proved to be far more diminished than her white co-stars.