Rogue tradesman Andrew Tedstill (pictured outside court) left Affy Paul with no heating, electricity or washing facilities after a catalogue of errors saw her house in Penn, Wolverhampton on the verge of falling in on itself

A cowboy builder left a mother-of-two distraught and her home at risk of collapse after pocketing £29,000 for a botched extension that ‘looked like a bombsite’.

Affy Paul, 47, had her sights set on her ‘dream home’ after laying out plans to convert her garage, extend her kitchen and landscape her garden.

But rogue tradesman Andrew Tedstill left her with no heating, electricity or washing facilities after a catalogue of errors saw her house in Penn, Wolverhampton on the verge of falling in on itself.

The 40-year-old, of Codsall, West Midlands was jailed for seven months after intimidating her into paying and putting her two sons, 21 and 22, in danger of the roof collapsing on top of them.

He was branded ‘belligerent and bullying’ as the judge passed sentence.

Tedstill had been recruited by Affy Paul in December 2015 for an extension to her home following her divorce.

But after handing over most of final sum, she discovered he had made a number of errors including knocking down doorways without supporting the roof above.

Ms Paul eventually confronted him in April 2016 and refused to make the final £1,650 payment. At this point former soldier Tedstill threatened to knock down all the walls he had built so far.

He then walked off the job and she called in Trading Standards, who eventually brought him to justice.

Meanwhile she was forced to remortgage her home to pay for £20,000’s worth of repairs. 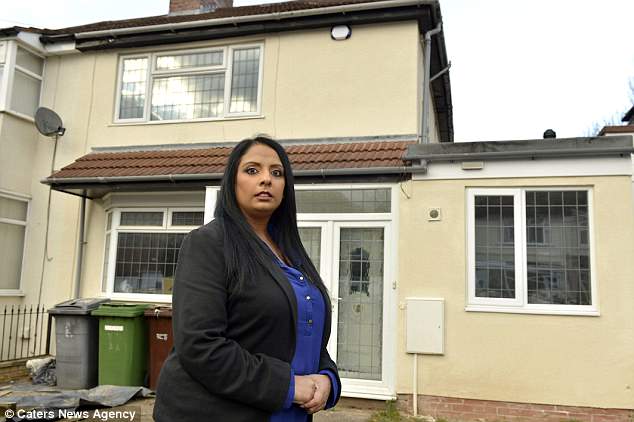 Mother-of-two Affy Paul (pictured), 47, had her sights set on her ‘dream home’ after laying out plans to convert her garage, extend her kitchen and landscape her garden in Penn, Wolverhampton

Tedstill continued to move on to each stage of the project without finishing the last until he eventually left Affy’s home with no heating, no electricity to part of the property, no kitchen or washing facilities and a building that was close to collapse.

He had also cut through cables and dumped rotting wood at the front of the home.

Affy, a company area manager, said: ‘This is my dream home and after losing my mum and going through a divorce, this was meant to be something positive.

‘But I feel like he took advantage of my vulnerability and now the house looks like a bomb site.

‘He has no conscience and he could have caused my whole house to collapse. 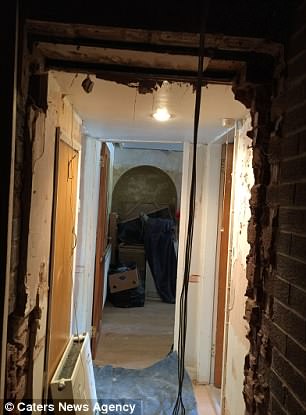 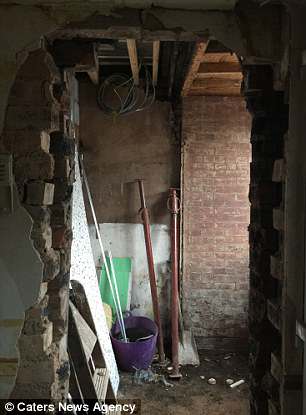 Tedstill continued to move on to each stage of the project without finishing the last until he eventually left Affy’s home with no heating, no electricity to part of the property, no kitchen or washing facilities and a building that was close to collapse 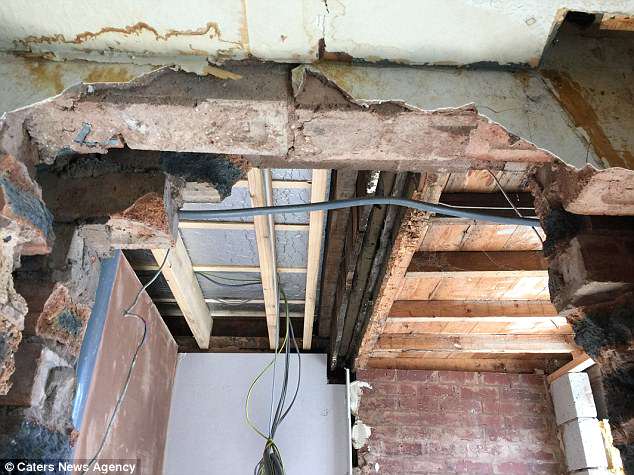 The 40-year-old cowboy builder ended up walking off the job without finishing it. Pictured: Affy Paul’s ripped out ceiling that cost her £20,000 to repair

‘It’s affected the whole family, one of my sons had to have a break from university as the stress and conditions of the house caused him to have eczema and I collapsed through stress myself.

‘I will have to cope with the fall out for the rest of my life. But he has now been made an example of and so cannot do this to anybody else.’

She added: ‘At first he started to work to the garden in December, 2015, which I questioned as starting the work in the middle of winter seemed strange. He claimed it was the best time to start.

‘When I confronted him about not finishing the garden first, he told me that he couldn’t due to bad weather and this was the pattern that continued.

‘He was very aggressive about it and I felt intimidated.’ 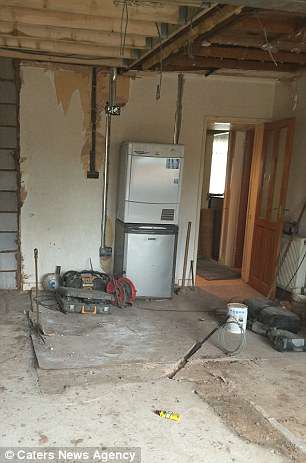 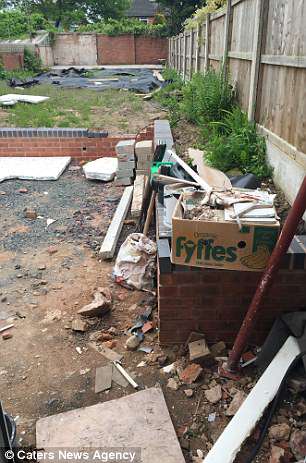 Ms Paul was forced to remortgage her home to pay for £20,000’s worth of repairs (damage pictured)

Ms Paul wanted to convert her downstairs garage and into a bathroom and utility room, as well as an extension of her kitchen, removal of two chimney breasts, work to the living room ceiling and a new landscape garden.

She had lived in the property for 16 years prior to the botched extension, saying: ‘When I told him I wasn’t happy with the work he got very aggressive and told me he would knock down the walls he had already built.

‘He was very intimidating and he was shouting in my face. I told him I would pay him further if he could finish the garden, roof, and extension probably first.

‘The plumber and electrician both refused to work with him and I had to pay extra on top to get someone else to do the job.

‘He had also knocked down doorways without any correct support, meaning the connecting walls could have collapsed at any time.’

The work was eventually seen by a building inspector from the council who told Affy that she should contacting trading standards as the work was not up to scratch.

A building expert from Wolverhampton Trading Standards estimated that Tedstill’s work actually just amounted to £5,000 worth of work.

Mr Mark Jackson, defending, said: ‘The promises he made turned out to be false but were initially genuine. 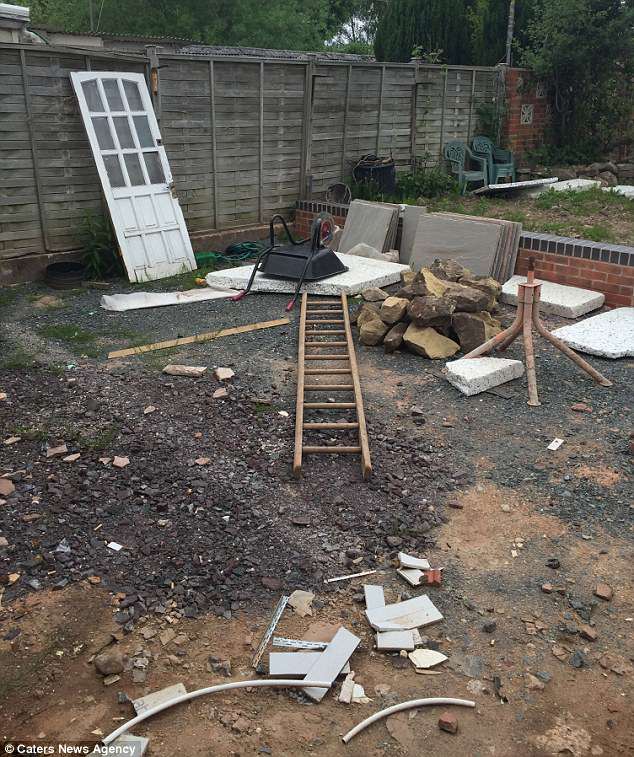 He promised to landscape her garden in Penn, Wolverhampton, but left it like this

‘He was incapable of managing a job that was too big for him and has not made money from this.

‘He did not arrive at Ms Paul’s home as a rogue builder but he left as one, with his reputation in tatters.’

Judge Michael Challinor told him: ‘You were belligerent and bullying and Ms Paul felt she had little choice but to placate you.

‘She suffered significant psychological harm as a result.’

Following the case Lee Jenks, Senior Trading Standards Officer at Wolverhampton council said: ‘I’m pleased justice has been served today, cowboy builders cause a huge amount of stress to the victims who have worked hard and saved to pay for improvements to their home only to be badly let down.

‘It’s vital that we bring cases like this to the public’s attention – to ensure they avoid becoming victims of reckless cowboy builders.

‘As a council, we have a duty to protect consumers from rogue traders who break the law and carry out sub-standard work and will continue to work to bring rogue traders to justice.’