This is the shocking moment a woman in Pennsylvania was involved in a brawl with Red Lobster staff after she demanded a refund for an order that took too long to arrive.

Video from the fight shows the customer being pushed out of the restaurant in East York on Sunday as others in the crowd waiting outside complained of a three-hour wait for their takeout food.

The incident came as coronavirus lockdown measures combined with increased demand for the popular brand on Mother’s Day.

The footage begins with someone inside the location yelling, ‘Get out!’ and the customer responding: ‘No! I want my motherf**king money back.’ 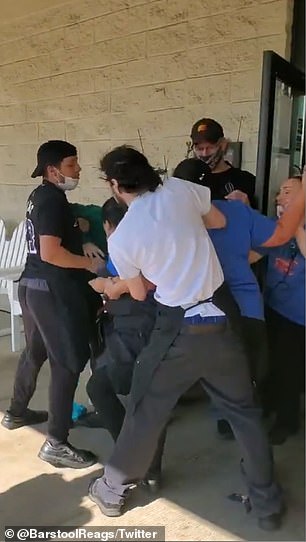 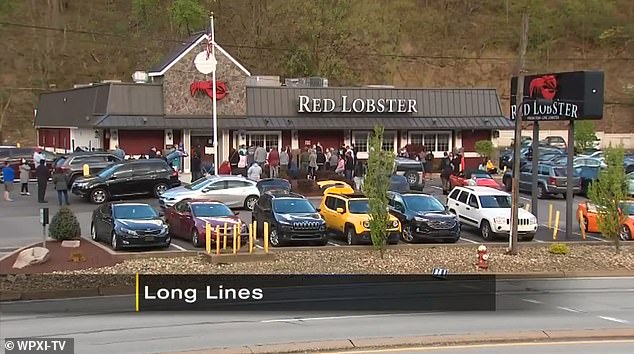 An employee replies: ‘You will get it.’

At this point a male and female are seen pushing the customer outside of the double doors.

‘Get her off me,’ the customer shouts. ‘I am getting my refund!’

The customers momentarily pauses but tries to get back inside the location again, yelling: ‘I want my money refunded. Let me show my bill to get my refund!’

As three workers create a human barrier in the doorway, a fourth worker asks for her name and reassures her the money will be returned.

It’s unclear what sparks an emotional reaction in the customer but she appears to suddenly attempt to hit a female staff member, who is heard saying ‘you’ve got to go’, and instead slaps a silent male worker in the face.

That female employee then grabs the customer’s hair as colleagues and reason with her to let go. 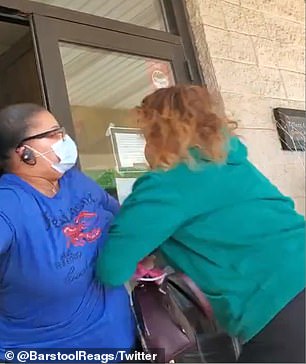 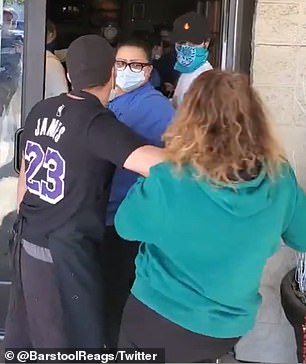 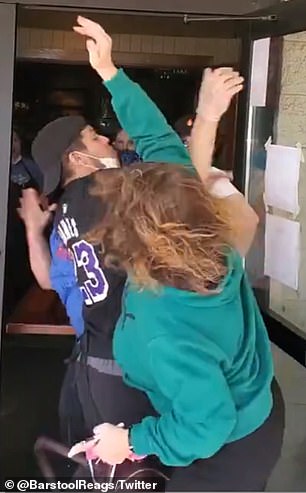 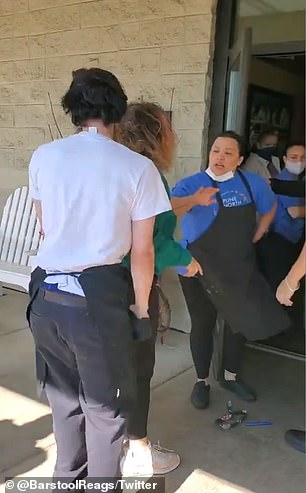 The customer was heard yelling that she wants her money back. A manager tried to reason with her but she would not wait any longer 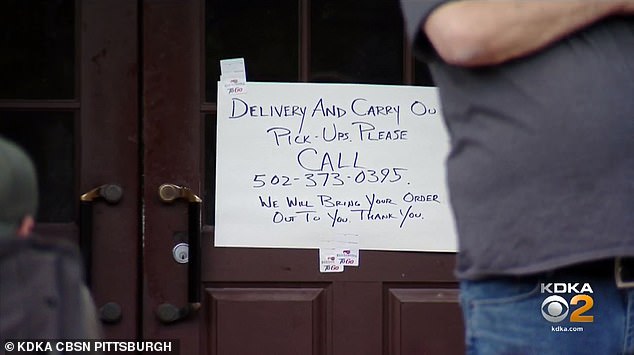 The customer, who is not wearing a face mask, then appears to grab the face covering of a second male employee wearing an apron, who is trying to separate the women.

After they are separated, the customer then creates a stir in the crowd of waiting customers as she declares: ‘I was assaulted and have a whole crowd to see it.’

As the crowd mumbles among themselves, the customer increases the volume of her voice and explains: ‘She’s been pushing up on me the whole time! Where’s my glasses?’

After employees close the door, the customer is seen making a phone call.

Police arrived on the scene around 4.26pm but by then the customer had left. They spoke with employees and then the woman at a nearby location.

Cops explained that she was upset because her food wasn’t ready and she wanted her money refunded. However patrons are not allowed inside due to social distancing measures.

‘That restaurant’s closed; you’re not allowed in there. My understanding is all food is brought outside of the building,’ Springettsbury Township Police Lt. Tony Beam told the York Daily Record.

Red Lobster said neither the customer nor manager were seriously hurt.

Police arrived on the scene around 4.26pm but by then the customer had left. They spoke with employees and then the woman at a nearby location

Dozens of people were seen waiting in the parking lot of the venue just outside Pittsburgh. It’s believed around 100 people were disappointed as food delivery workers were also caught up in the wait.

‘I blame Red Lobster,’ customer John Morrison told KDKA. ‘They took way more orders than they could possibly fill. I put mine in at 10.30pm this morning.’

Red Lobster apologized for the delays and suggested it was down to coronavirus-related protocols.

The company said to-go orders placed online that were pre-paid and not fulfilled will be refunded and guests who placed an order through a third-party should reach out to the company through which the order was placed.

‘During these unprecedented times, we are grateful for our guests who continue to want to celebrate with Red Lobster,’ the brand said in a statement.

‘It’s always our goal to provide our guests with a great seafood experience, while also maintaining high standards for health and safety, including social distancing. We apologize that some of our guests experienced longer than anticipated wait times and crowds today and in some cases may have chosen not to wait for their orders.’