Panthers skipper Isaah Yeo slams Rabbitohs star after ‘the worst shot you’ll ever see’ led to monster suspension…but could he use a loophole to get out of it?

Trailing 24-12 in the final quarter, Leniu burst through Souths middle when Milne came in from his wing and took out the young gun with a high shot.

Milne’s finals track record has plagued him all season, having been sin-binned twice against the Roosters in their elimination win.

Former NRL star Braith Anasta called out the winger, saying ‘is that the worst shot you have ever seen? That was a shocking tackle.’ 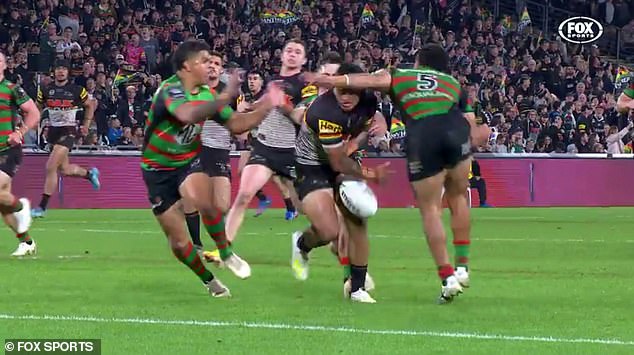 Milne launches his left arm into the head of Spencer Leniu, making flush contact with the Penrith prop

I feel like he got warned last game Taane too. It’s happened a couple of times now. He had every chance to drop his arm or make contact somewhere else but he flushed him in the head.’

Mline was sent off after his illegal shot, which flared up Leniu on the sidelines, giving shades of the Adam Blair and Glenn Stewart brawl of Brookvale in 2014. 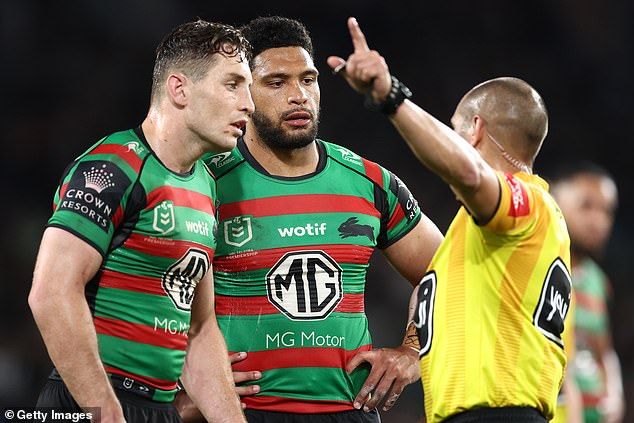 Milne was sent off for his shot, which Braith Anasta labelled the ‘worst shot he’s ever seen’

‘It was awful and stupid and puts everyone under pressure, it also alleviates any sort of comeback,’ Corey Parker said.

‘Seriously, that tackle got outlawed in 1980, if he says that he is not thinking it is even worse,’ Gorden Tallis added.

Absolutely disgusting from Souths. Had to go. What a cheap shot from Milne. Souths Played that garbage against the Roosters. Won’t get away with it tonight. #NRLPanthersSouths

Yet, given Milne’s selection in the Fijian World Cup side, he could serve four games of the ban at an International level.

Fiji are pencilled in to play a warm-up game against England and then take to their Cup campaign with three pool games.

Milne was the first player to be sent off in a preliminary final since North Sydney’s Gary Larson and Canberra’s John Lomax in 1994.

Rooster Collins was granted the Prime Minister’s XIII clash against Papua New Guinea as part of his four-game ban, for a nasty hip drop back in round 24.

Hardman Hargreaves will be free to play in the Kiwi’s final pool game.

Souths loss is their fourth preliminary exit in five years, a hard pill to take given they were leading 12-0 30 minutes in.