Pensioner, 84, is named as one of the victims of listeria outbreak

Two more victims of the listeria outbreak at hospitals in Britain were named today as an 84-year-old pensioner and a retired nurse aged 57.

Enid Heap, 84, a mother-of-five and retired chemist from Beswick, Manchester, was admitted to Manchester Royal Infirmary in March with breathing difficulties, but died on May 6 with her family at her bedside.

Also named was Beverley Sowah, 57, a retired nurse born in Jamaica who lived in Manchester. She was admitted to the same hospital on April 15 but died on April 26.

Patients are suspected to have died after eating pre-packaged sandwiches and salads linked to the same supplier, The Good Food Chain

Samples had been taken from Mrs Sowah for analysis as part of her ongoing treatment on April 25, Manchester Coroner’s Court heard at an inquest this morning.

No relatives of Mrs Heap, who had a daughter called Beverley Heap, were present in court for the hearing in front of Nigel Meadows, senior coroner for Manchester.

Mr Meadows said he had been in contact with the families of both women, adding: ‘They have obviously suffered a very tragic, recent bereavement and are very shocked and distressed to lean about the circumstances which are now suggested to have led to the deaths of their loved ones.’

What is listeriosis and how does it spread?

Listeriosis is a rare but deadly infection caused by eating food contaminated with a bacteria called listeria monocytogenes. There are about 170 cases of listeriosis in the UK every year, and it kills about one in four of those affected. Most people who eat food contaminated with listeria develop mild flu-like symptoms that pass within a few days. But in high-risk individuals, the listeria can spread around the body, leading to life-threatening complications including sepsis.

Listeria is most commonly spread in pre-packaged sandwiches and ready meals, as was the case in this outbreak. It can flourish with or without oxygen and, unlike many other bacteria, thrives and reproduces at temperatures as low as 0°C. This enables it to survive in the fridge and pass through food-processing equipment and the food chain. Historically, the bug has been associated with soft ripened cheese, such as camembert or brie, as well as pate, sliced meats, salad leaves and raw unpasteurised milk. You can also catch listeria from someone – for example, if you eat food they have handled when they have not washed their hands.

How can it kill you?

The listeria bacteria enters the intestinal system in contaminated food, before colonising the liver where it multiplies. If the body is unable to fight off the infection, it can lead to sepsis or meningitis, which can kill within hours. Listeria bacteria have the ability to hijack immune cells and live within human cells, making it very difficult to treat. It is diagnosed with a blood test and treated with antibiotics.

Listeria frequently proves deadly for those with weak immune systems – with pregnant women and newborn babies most at risk. Pregnant women are advised to avoid all soft cheeses because even if a listeria infection causes only a mild illness in the mother, it can spread to their unborn baby with devastating consequences. NHS England said more than a quarter of pregnant mothers with listeriosis lost their babies. People aged over 60 years are also deemed to be at high risk of developing listeriosis, as are those who having chemotherapy, which suppresses their immune system.

Have there been previous outbreaks?

There has never been a major outbreak of listeriosis in the UK, but there have been product recalls following scares, including the recall of two Cadbury desserts last week. South Africa suffered the biggest-ever listeriosis outbreak last year, when 967 people were infected and 180 died in an outbreak which was traced back to processed meat.

Joan Thompson, a neighbour of Mrs Sowah, told MailOnline today: ‘She was a wonderful lady, wonderful mother and friend. She’ll be sadly missed. We knew each other for 30 years or more, we worked together at the hospital.

‘She was absolutely a good friend and wonderful neighbour. She invited us over for meals, for Christmas and parties.’

Ms Thompson’s daughter Anthea Thompson, 44, added: ‘We treated each other as family. She was a good cook, she made an amazing roast beef dinner and a lovely salmon and egg pie.

‘She was a down to earth mother, didn’t take much to heart. I lost my dad so I know how her children feel, she brought them up really well.

‘They are the best neighbours we’ve had. They kept themselves to themselves. We’re going to miss her.’

Mr Meadows told the court that before the listeria deaths were uncovered an inquest had already been held into Mrs Sowah’s death. He said: ‘It had been prepared, it not only opened but closed on May 20.’

Mr Meadows decided there was no need for an inquest in the case of Ms Heap.

The listeria present in both women’s bodies was thought to be as a result of natural process not related to food contamination, Mr Meadows said, and there was no suggestion the deaths were unnatural.

At a brief hearing to open and adjourn the inquest into the death of Ms Heap, he said: ‘I was not aware of any suggestion whatsoever that listeria might have arisen from contaminated sandwiches.

‘If I had, matters would have progressed completely differently.’

On May 26, PHE wrote a letter to all NHS trusts titled: Risk of Listeriosis in vulnerable patients from sandwiches supplied by the Good Food Chain.

Three days later a senior doctor then emailed the Manchester coroner regarding the deaths of Mrs Sowah and Ms Heap, in which the trust considered that listeria was thought to be involved and that this was part of a larger national outbreak which PHE was investigating.

On June 6, PHE was able to link the strain of listeria with a chicken product used for sandwiches supplied by the Good Food Chain Ltd.

Mr Meadows said at the present time ‘it might well be’ there is a link between the deaths and the chicken sandwiches contaminated with listeria, but that has not been proved yet.

As an inquest had already been held for Mrs Sowah, the coroner said this left him in a ‘procedurally difficult position’ and he would now have to seek the permission from the Attorney General to apply to the High Court to hold a new inquest due to new information coming to light.

In Mrs Sowah’s case this would take some months, as would the inquest which will now be held into the death of Ms Heap.

In both cases, listeria had been listed as a cause of death but Mr Meadows said at that time there was no suggestion the listeria had come from sandwiches.

He said listeria can also occur as a result of natural disease process. He added: ‘I was not aware of any suggestion whatsoever that listeria might have arisen from contaminated sandwiches. If I had, matters would have progressed completely differently.’ 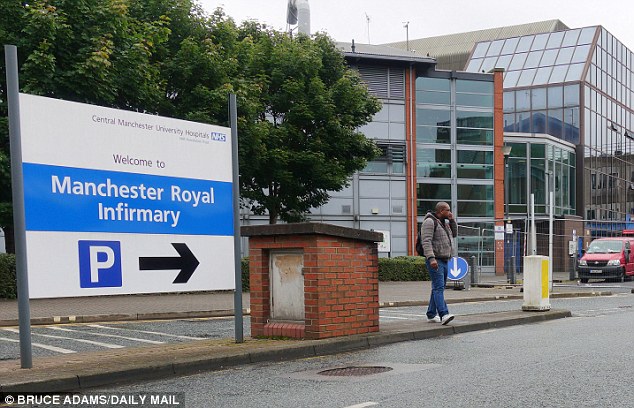 Solicitors for the hospital trust, Sodexo Health Care and Northern County Meats were at the hearing today.

Meanwhile, a separate inquest heard that the cause of death of a businessman who contracted listeria while in hospital for liver cancer is yet to be established.

Hospitals must stop sourcing food from outside suppliers to prevent future listeria cases, the MP for one of the trusts at the centre of the scandal has urged.

Lucy Powell, Labour MP for Manchester Central, also criticised the refusal of medical authorities to release details of the victims of the listeria outbreak.

Miss Powell hit out at the ‘wall of silence’ after the Daily Mail led calls for more transparency over the scandal.

Two of the infected patients who died had been treated at Manchester Royal Infirmary in her constituency.

Leading microbiologist Professor Hugh Pennington has said disclosing the sex and age of the victims would help doctors identify the groups most at risk.

But Public Health England and the affected trusts have refused to release information about those who died, citing patient confidentiality.

The infection has been traced to sandwiches supplied by the Good Food Chain, which had been provided meat by North Country Cooked Meats, based in Salford.

Speaking in the House of Commons, Miss Powell said: ‘This growth in outsourcing is leading to some real safety issues and potentially to these deaths themselves.’

Yesterday Miss Powell told the Daily Mail she welcomed the Government’s pledge for a review, but added: ‘The public at large and other patients need more assurance.

‘Whilst respecting the wishes of the families involved, rather than putting up a wall of silence, agencies should be more open and transparent.’

Ian Hitchcock, 52, was identified by his wife Miranda, who was by his side when he died in Nottingham City Hospital on June 8.

Derby Coroner’s Court heard Mr Hitchcock had eaten a sandwich from the Staffordshire-based Good Food Chain and it was ‘not contested’ that he had contracted listeria.

Coroner Dr Robert Hunt said the cause of death would be known in six to eight weeks.

Mr Hitchcock’s older brother Alan Hitchcock, who runs a haulage company, said hat his sibling had ‘everything to live for’ after a successful kidney transplant three years ago and vowing to beat the liver cancer he had been diagnosed with.

Grieving Mr Hitchcock is hoping his 19-year-old twin nephews Andrew and John will now ‘take on in his memory’ their father’s business.

Speaking to MailOnline, he said: ‘We are all devastated and heartbroken by our loss, it was so sudden and unexpected.

‘My brother had been given a clean bill of health after his kidney transplant but became poorly last month and was being treated for liver cancer. ‘

Earlier this week, the NHS identified University Hospitals of Derby and Burton as one of the hospital trusts affected by a patient death.

Health Secretary Matt Hancock has previously warned there will be ‘severe consequences’ if there is evidence of ‘wrongdoing’ over the listeria outbreak.

The Good Food Chain, which supplied 43 NHS trusts across the UK as well as one independent provider, voluntarily ceased production and Public Health England (PHE) said the investigation into the outbreak is continuing.

The business was supplied with meat produced by North Country Cooked Meats, which has since tested positive for the outbreak strain of listeria and also stopped production.

Listeria infection is rare and usually causes a mild illness in healthy people.

However, it can have more serious consequences among those with pre-existing medical conditions, pregnant women and those with a weak immune system.

PHE insisted the health risk to the public remains low and said people should only seek medical attention if they develop symptoms.