Pensioner ‘forced out’ of home by railway lift towers

Andy Wells and his wife Susan live in Maghull, in Merseyside, where Maghull North train station is currently being built. The towers form part of a footbridge at the new station

A pensioner and his wife say they are being forced out of their home of 42 years after 28ft-high concrete blocks ‘sprung up’ at the bottom of their garden over a single weekend.

Andy Wells, 67, said that the two ‘monstrous’ towers, which will act as lift shafts for a new rail station, have pushed him to breaking point.

Mr Wells and his wife Susan live in Maghull, in Merseyside, where Maghull North station is being built. The towers form part of a footbridge at the new  £13m station, which is expected to open in May.

Mr Wells told the Liverpool Echo: ‘The towers went up very quickly last weekend. They are the same height as our house and the view from our bedroom window has been ruined.

‘Imagine trying to sell up with those two things there. Hardly a charming view is it? They are military-style watch towers and look like something out of World War Two.

‘I have been told that there are plans to cover the towers in bricks and then paint them black. They will be hideous.

‘I think the value of our house has fallen by around 30 per cent so far, and it could lose even more. But the point is that I don’t want to move at this stage in my life.’ 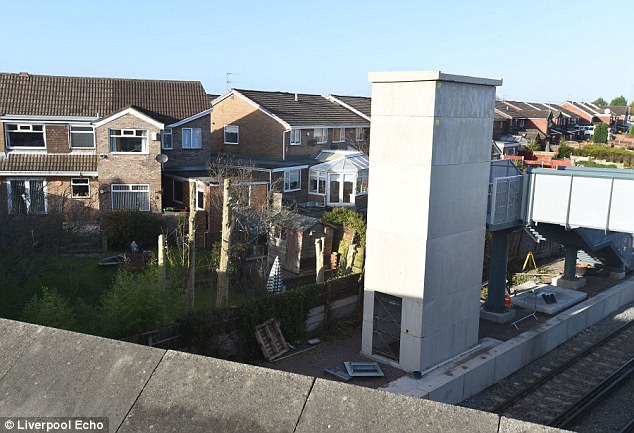 The towers form part of a footbridge at the new £13m station, expected to open in May

Mr Wells says that his home is often illuminated by floodlights as ground crews work through the night on the new station.

He said: ‘We moved into the house in 1976 a week before we got married in May.

‘Obviously there was nothing in the plans then about it! The floodlights shine straight into our bedroom. They have this new type of heavy digger.

Every time it moves it lets out an ear piercing sound.

‘They are massive machines. My wife woke up the other night at around 4am and said ‘I can’t do this any more. Let’s sell up’.’ 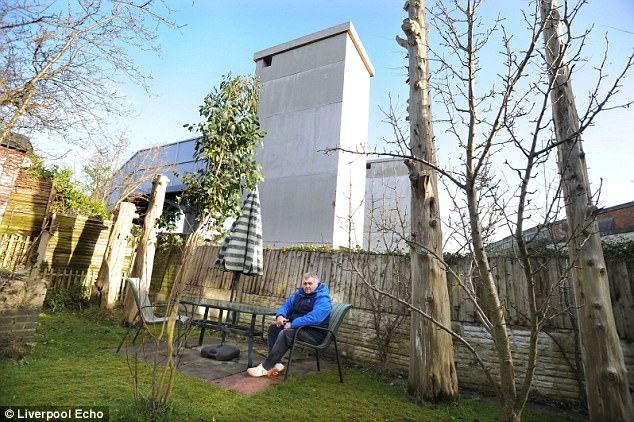 Mr Wells says that the two ‘monstrous’ towers, which will act as lift shafts for a new rail station, have pushed him to breaking point

Mr Wells told the Liverpool Echo that his wife has recently received treatment for a tumour and that their lack of sleep had made life even more difficult.

He said: ‘We have both been suffering from sleep deprivation. Imagine trying to sleep with those diggers on the go.

‘Sometimes they work through the night, or they will start up at around 4am. And when they start you know about it.

‘Fortunately my wife recently got the all-clear from doctors, but we still have to live here. I know I will face the rest of my days staring out at those towers. Some of my neighbours have been reduced to tears. My wife and I are both at breaking point now.’ 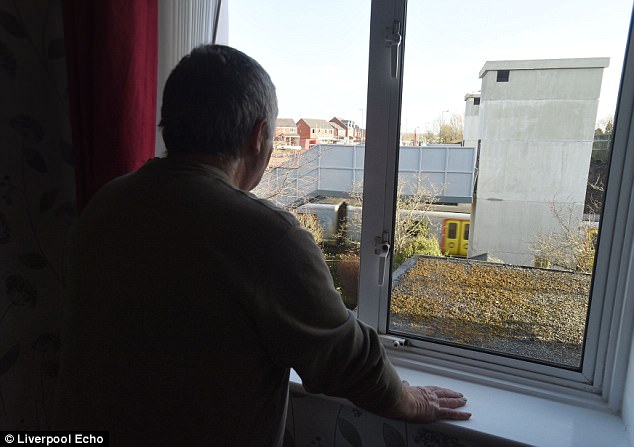 A Merseytravel spokesperson said: ‘We are aware of the concerns that have been raised by residents who live in close proximity to the new Maghull North station site.

‘Due to the nature of the work that is being carried out in order to construct the new station, the only realistic and safe option is to carry out much of the work during the night when trains are not running.’

‘We do understand that this is a significant disruption to those residents and after discussions with Sefton Council, it was agreed during the recent 12-day closure of the line that noisy works would not be undertaken between midnight and 6am.

‘Both ourselves and Network Rail have kept in constant dialogue with the residents through a number of engagement channels, including public drop-in events and newsletters.

‘We will continue this dialogue throughout the project and we would advise that any immediate concerns can be raised by calling Network Rail’s 24-hour helpline on 03457 11 4141 or for other issues, by emailing comments@merseytravel.gov.uk.’