On a rare visit to the home of the U.S. military’s prison for terror suspects, Defense Secretary Jim Mattis offered a pep talk Thursday to American troops – and urged them to always be ready for war.

‘I need you to be at the top of your game,’ he told an assembly of several hundred troops, citing their roles both as a fighting force and as a positive example to a politically divided America of how to work together.

The unannounced visit was the first by a defense secretary since Donald H. Rumsfeld came here in January 2002 shortly after the first prisoners arrived from Afghanistan.

Mattis did not discuss the Trump administration’s plans for the detention center, nor did he visit it.

In with the troops: Defense secretary Jim Mattis addressed hundreds of troops based at Guantanamo, telling them that North Korea is a ‘direct threat’ they should be prepared for 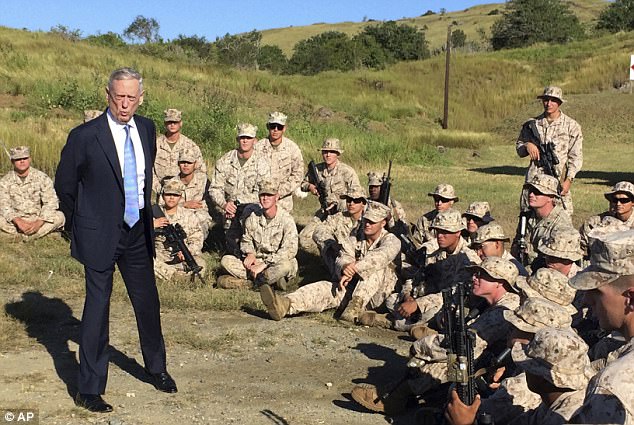 ‘I need you to be at the top of your game’: Defense Secretary Jim Mattis addressed troops at Guantanamo Bay who asked him about North Korea 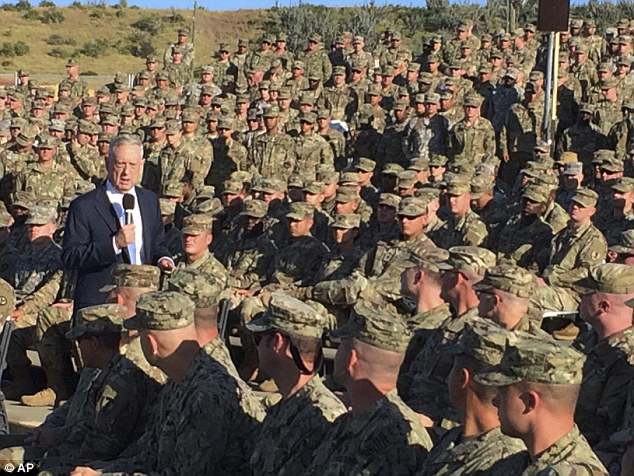 No leaving Guantanamo: ‘We need this base badly,’ Mattis told troops stationed at the facility, which is best known for its detention center for terror prisoners 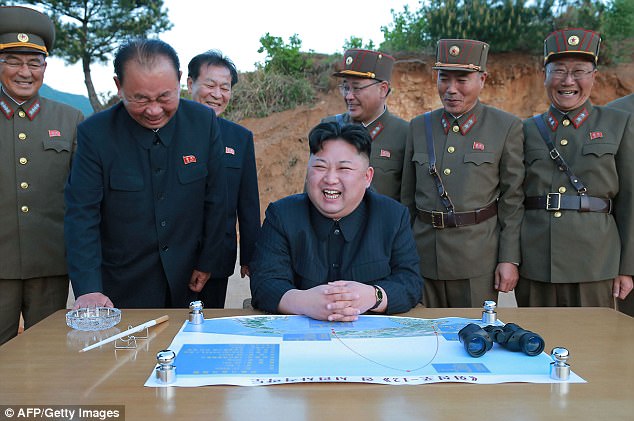 No safe assumptions: Mattis said that during the Cold War US. leaders had been confident that Russia and China did not want to start a nuclear war. ‘That may be an assumption we cannot make,’ he said of Kim Jong-Un

But he stressed the importance of keeping the Navy base as a U.S. toehold in southeastern Cuba. He said it will not be abandoned, regardless of the future of the prison.

‘We need this base badly,’ he said, as a strategic spot to conduct humanitarian relief and other naval operations, as it had before the Sept. 11, 2001, attacks.

Mattis spoke to three groups of troops, offering holiday greetings and thanks for their service. He also fielded their questions as he stood in a warm sun, and found that the prospect of war with North Korea was on their minds.

Mattis said international efforts to compel North Korea to give up its nuclear weapons are focused for now on diplomacy. He also emphasized that effective diplomacy must be backed by a credible threat of military force.

‘We need to keep this in a diplomatic framework for solution,’ he said. But he added that in the event diplomacy fails, ‘you all have to be ready to go.’

Speaking to a few dozen Marines at a rifle range, Mattis described North Korea as a ‘not yet imminent but a direct threat to the United States.’

At another point, at an outdoor movie theater where troops and civilian staff had gathered, Mattis said that during the Cold War, U.S. leaders had been confident that Russia and China did not want to start a nuclear war.

‘That may be an assumption we cannot make’ with North Korean leader Kim Jong Un, he said.

Mattis was asked if the U.S. has worked out planning for a post-war Korean Peninsula, including the issue of reunifying the North and South. He answered indirectly by saying, ‘We’re probably not where we need to be’ in such discussions with Russia, China and others.

Mattis arrived at Guantanamo Wednesday night and was accompanied by an Associated Press reporter. His overnight stop at Guantanamo comes amid uncertainty over the Trump administration’s policy on continued use of the military prison.

Later Mattis was flying to Mayport Naval Station in Florida, and planned on Friday to visit Camp Lejeune and Fort Bragg in North Carolina. 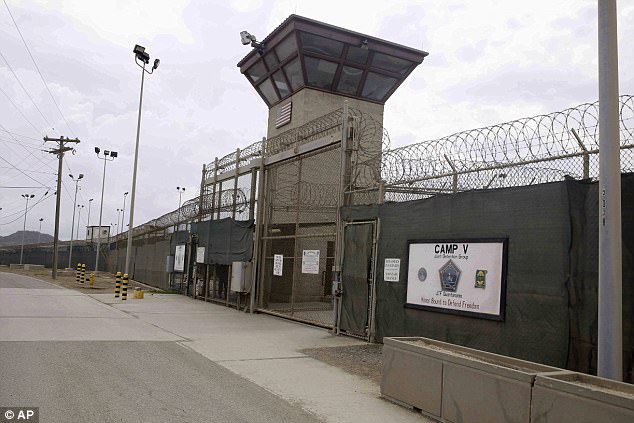 Secure facility: The 41 remaining Guantanamo prisoners are held in Camps 5 and 6, which resemble regular prisons on the U.S. mainland 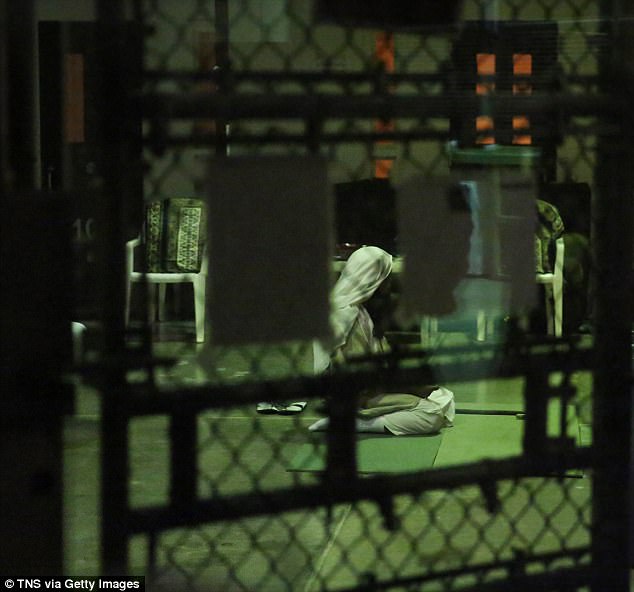 Rare glimpse: Access to Guantanamo is strictly controlled and the only images of prisoners do not show who they are, with military censors approving which photographs are released 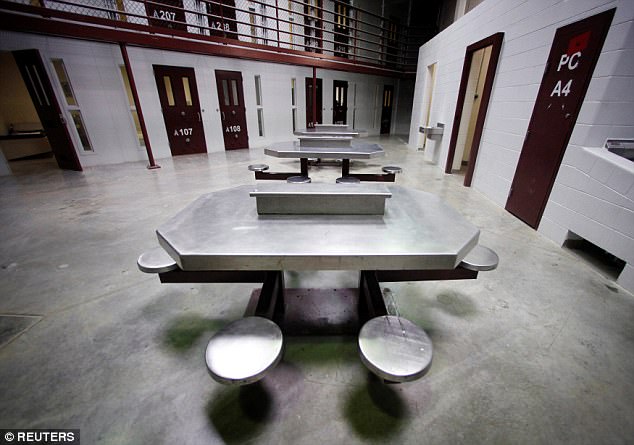 Largely empty: The newest detention buildings at the naval base were built for far more prisoners than the 41 who remain there, of whom ten are awaiting trial and five have been cleared for release

Mattis is the first defense secretary to visit Guantanamo Bay since Donald Rumsfeld in January 2002, just weeks after the first prisoners arrived from Afghanistan in the early stages of the fight against terrorism. The detention center was set up to hold suspected terrorists shortly after the attacks of Sept. 11, 2001.

Forty-one prisoners remain in detention. Ten have been charged by a military commission. Five have been cleared to leave, but their status is in doubt under the current administration.

That leaves 26 in indefinite confinement, though some eventually could be cleared for release, too, or prosecuted. Lawyers are considering filing new legal challenges, arguing that a policy of no releases means the detainees’ confinement no longer can be legally justified as a temporary wartime measure.

President Barack Obama tried to close the detention center, but was thwarted by Congress. Lawmakers objected to transferring detainees to confinement facilities in the United States. 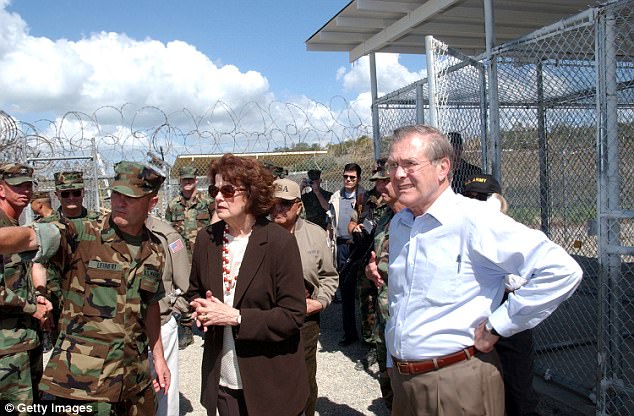 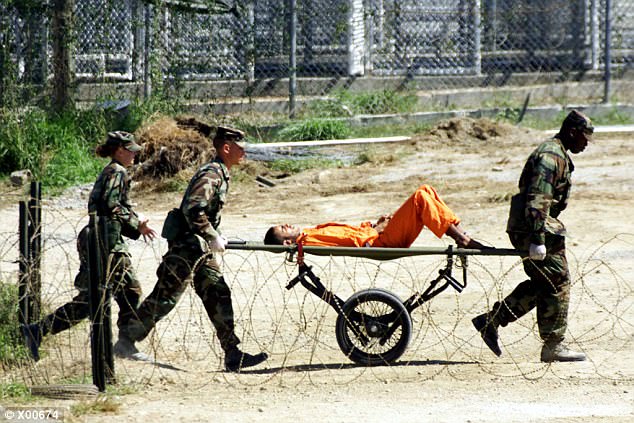 The way it was: The last time a defense secretary visited Guantanamo was in 2002, shortly after pictures of the first detainees emerged

Mattis has said little publicly about Guantanamo Bay since taking office in January. The subject wasn’t raised in his Senate confirmation hearing.

In response to written questions submitted to him before that hearing, he said: ‘I believe that we should develop a repeatable detainee policy that is appropriate for enemy combatants taken prisoner under such circumstances.’

Asked whether the U.S. should keep detainees without trial, he said: ‘Long-term detention is appropriate when an unprivileged enemy belligerent poses a continuing significant threat to the security of the United States.’

Sessions underscored the administration’s support for continued use of the prison. He called it a ‘perfectly acceptable’ place to detain new terrorist suspects, as opposed to holding them in the U.S. and having his own Justice Department try them in civilian courts.