Experts are increasingly concerned by the new trend for DIY fecal transplants, and have warned participants are opening themselves up to a range of new illnesses.

This procedure involves transferring feces from the gut of one person to another, and typically is used to treat Clostridium difficile: an extremely painful bowel infection that often resists antibiotic treatment and can leave sufferers stumped for treatment, but for which fecal transplants have been proven unexpectedly effective.

But a number of recent studies suggest it could treat health problems ranging from IBS to autoimmune diseases.

It’s thought an increasing number of people are prematurely trying this procedure themselves at home in hopes of treating painful, incurable problems, but don’t understand the risks.

Experts are increasingly concerned by the new trend of DIY fecal transplants, saying participants are opening themselves up to a range of new illnesses

WHAT IS CLOSTRIDIUM DIFFICILE?

Clostridium difficile, also known as C. difficile or C. diff, is a bacterium that can infect the bowel and cause diarrhoea.

The infection most commonly affects people who have recently been treated with antibiotics, but can spread easily to others.

C. difficile infections are unpleasant and can sometimes cause serious bowel problems.

The most common symptoms are: watery diarrhoea, painful tummy cramps and signs of dehydration, such as a dry mouth, and headaches.

Treatment for C. difficile can may include taking a 10 to 14-day course of antibiotics that are known to kill C. difficile bacteria or, rarely, surgery to remove a damaged section of the bowel.

Fecal transplants are a new form of treatment for the illness, coming out of Australia.

Experts say fecal matter must be screened prior to use, and worry disorders like MS and Parkinson’s could be transmitted to people doing it from their own homes.

A poorly timed vogue for at-home fecal transplants could be putting lives in danger.

Rob Knight, professor of paediatrics, computer science and engineering at the University of California San Diego, says we still don’t understand the full effect the procedure.

The treatment uses bacteria from a healthy gut, within a fecal extract, to colonise an unhealthy gut, for example, one that has lost its natural bacteria colony due to antibiotics.

Fecal transplants have been used successfully to treat Clostridium difficile, a gut inflammation caused by antibiotics and common among older people.

Despite being poorly understood, DIY fecal transplants appear to be on the rise.

Roughly 4,260 videos concerning ‘fecal transplant’ can be found YouTube, and many styled as ‘how-to’ guides.

‘It is regrettably something that is increasing in frequency,’ Knight told the Guardian, saying those with incurable diseases are particularly motivated to try out any new treatment, no matter how poorly established its benefits.

The danger of these transplants is that disease may also be transmitted, although this is not well understood. 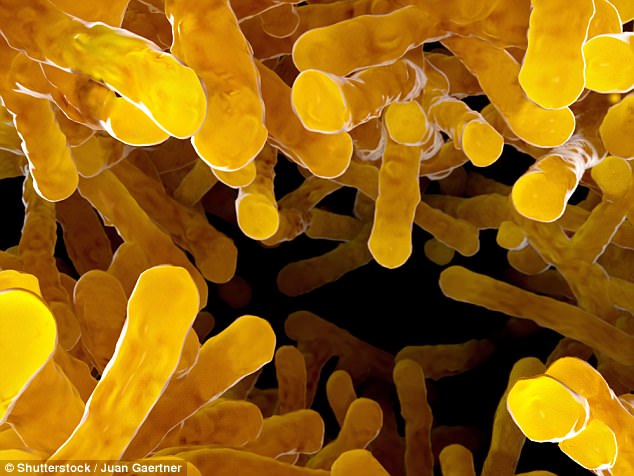 Bacteria are transplanted from a healthy gut within a fecal extract in order to colonise an unhealthy gut, for example, one in the natural biome has been destroyed by antibiotics

‘Given that we know that these are things that in mice, at least, can be transmitted by the microbiome, it is not cause for panic yet, but it is certainly cause for concern that the same might be true in humans,’ he said.

‘[Very recently] we were able to show that you can transmit aspects of the disease from humans into mice by transmitting the microbiome,’ said Knight.

WHAT IS A FECAL MICROBIOTA TRANSPLANTATION?

It involves the transfer of healthy bacteria from a donor into the intestines of the recipient.

The idea is to restore the balance of bacteria in the recipient’s intestine so they can fight infection.

After one C. difficile infection, there is up to a 25 percent chance it will come back.

Endoscopy damage occurs in less than one in 1,000 cases. This may include infection, bleeding or tearing.

In a hospital setting, material is screened prior to use.

However, this doesn’t guarantee absolute safety.

In 2015, a woman was given a transplant for a Clostridium difficile infection from her daughter.

The mother afterwards began gaining weight – a problem she had not experienced before, and something her daughter suffered.

Doctors believe they bacteria causing the daughter’s weight trouble could’ve been transferred with the transplant.

‘It is one of these things where public enthusiasm is dramatically in advance of the evidence.

‘The C.diff evidence is good,’ he said.

‘For others, research is needed. A lot of folks will try anything, although there’s not much data to say it’ll work.’

Knight’s team at the University of California San Diego are presenting their latest work at American Association for the Advancement of Science in Austin.

They hope to utilise IBM’s Watson, a question answering computer system, to develop a database which presents the latest research on the microbiome for public education.

It’s hoped this will help inform people about the possiblities offered by the procedure, and its limitations.