TikTok users are putting an alternative spin on a time-honored holiday tradition by getting decked out in goth and emo outfits to pose for pictures with Santa Claus.

The growing trend has led to an influx of people documenting themselves donning black leather and lace, studs and spikes, and heavy makeup before heading to their local malls to sit on St. Nick’s lap.

Many of the final photos show them seated next to Santa with stone-cold expressions on their faces instead of the expected smiles.

The trend isn’t actually new, as Insider pointed out, but it has reemerged with vengeance this holiday season and led to some users going viral. 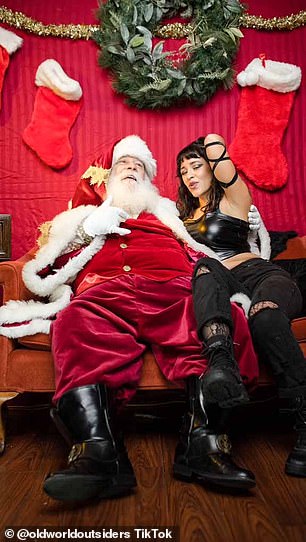 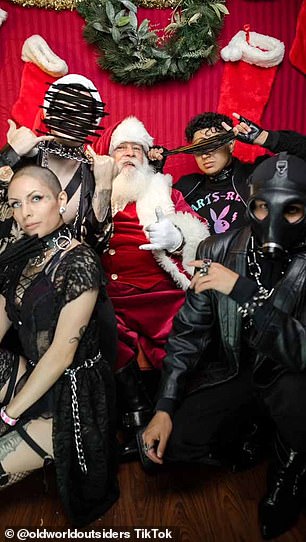 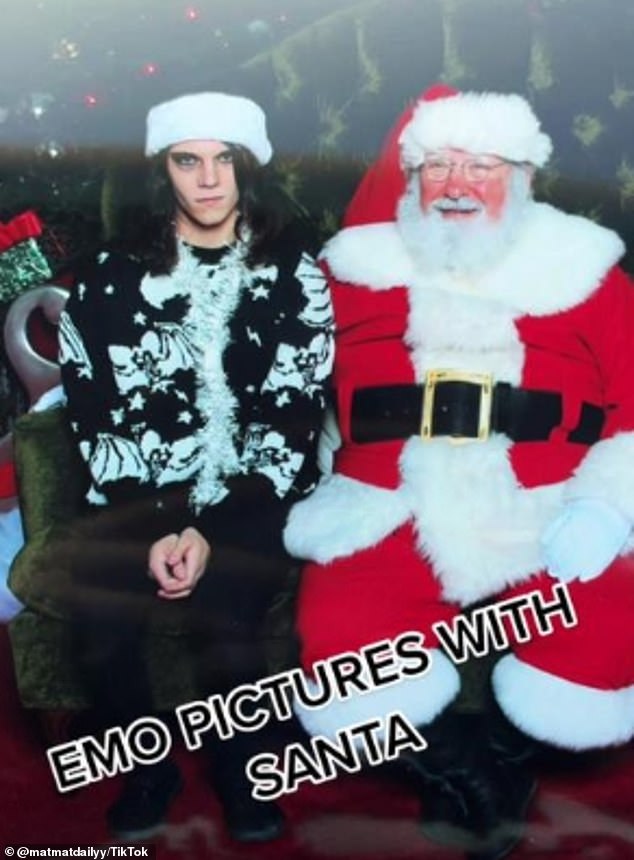 Earlier this month, TikTok user @thepunkstylist shared a video of herself styling her and her friend’s hair in liberty spikes before they went to see Santa.

The duo brought a bust statue of Jesus with them and had Santa hold it in his arms as they cuddled next to him and struck punk-rock poses.

The video has been viewed more than 1.8 million times and has received thousands of comments from fans.

‘The pic with Santa is SO COOL,’ one person gushed.

Another agreed that the holiday photo is ‘absolutely iconic.’ 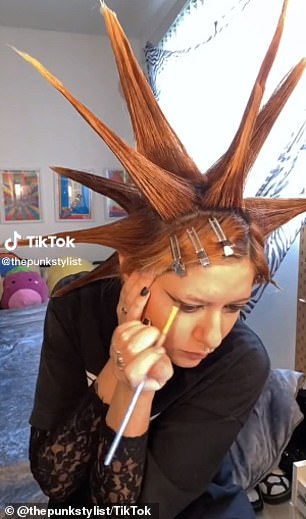 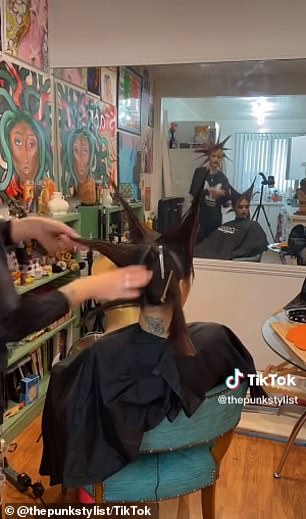 Earlier this month, @thepunkstylist went viral after sharing a video of herself styling her and her friend’s hair in liberty spikes before they went to see Santa 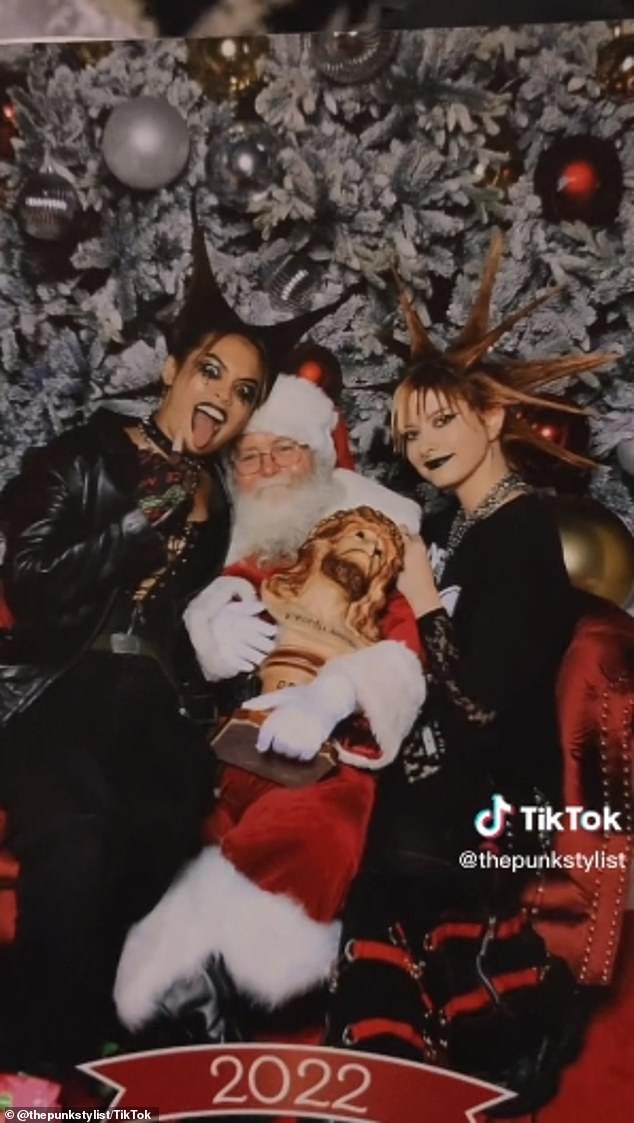 ‘That is the best photo I’ve ever seen,’ someone else insisted.

However, @thepunkstylist noted in the caption that other shoppers didn’t appreciate their goth holiday looks.

‘We got verbally attacked by multiple different people at the same time during this mall experience,’ she wrote.

TikTok user @lunamoor_ went viral last month when she shared footage of her and her friends sporting matching black skirts, corsets, and colorful streaks in their hair while posing with Santa at a mall in Sydney, Australia. 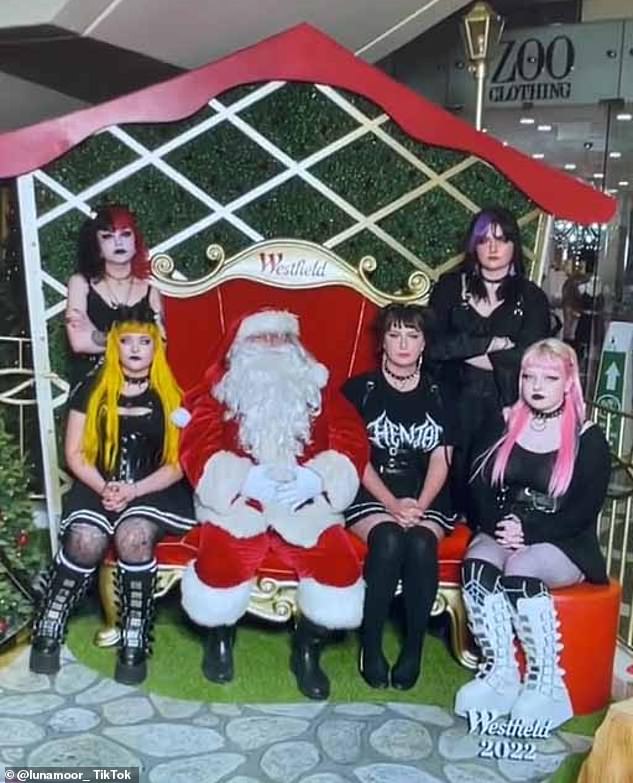 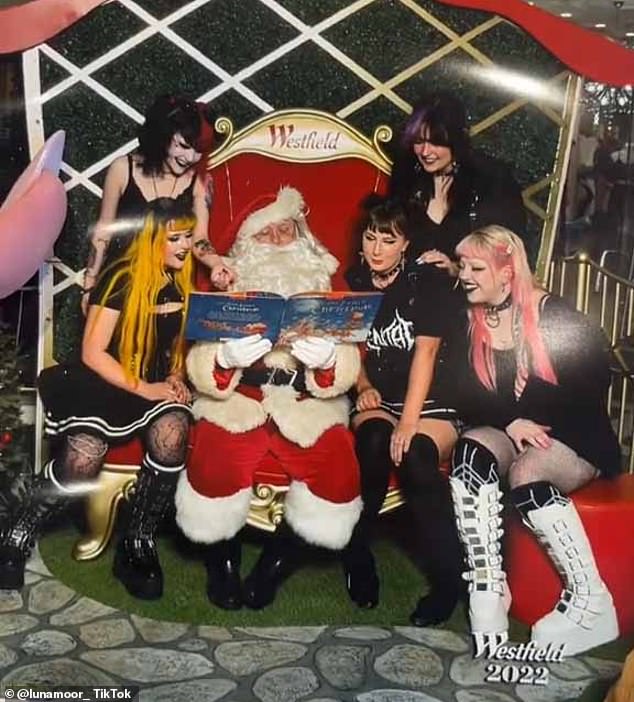 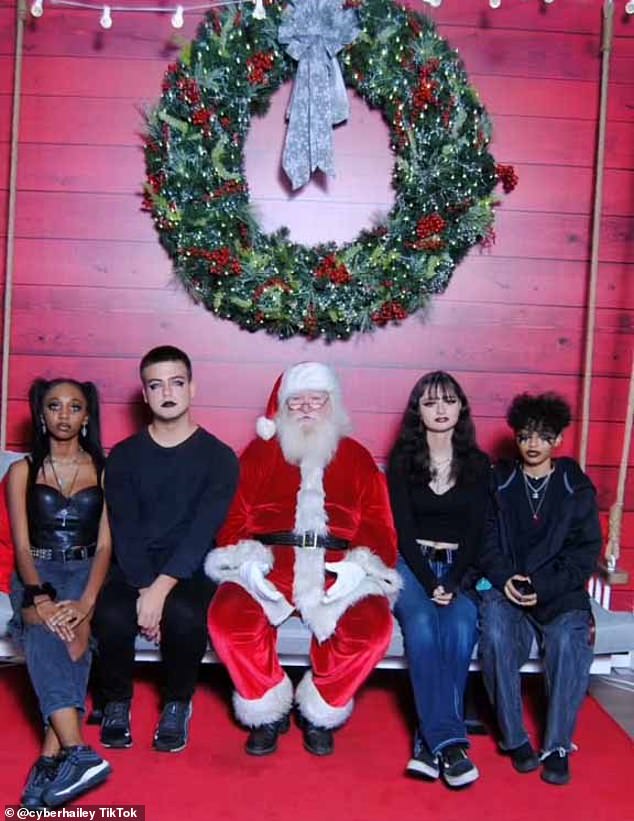 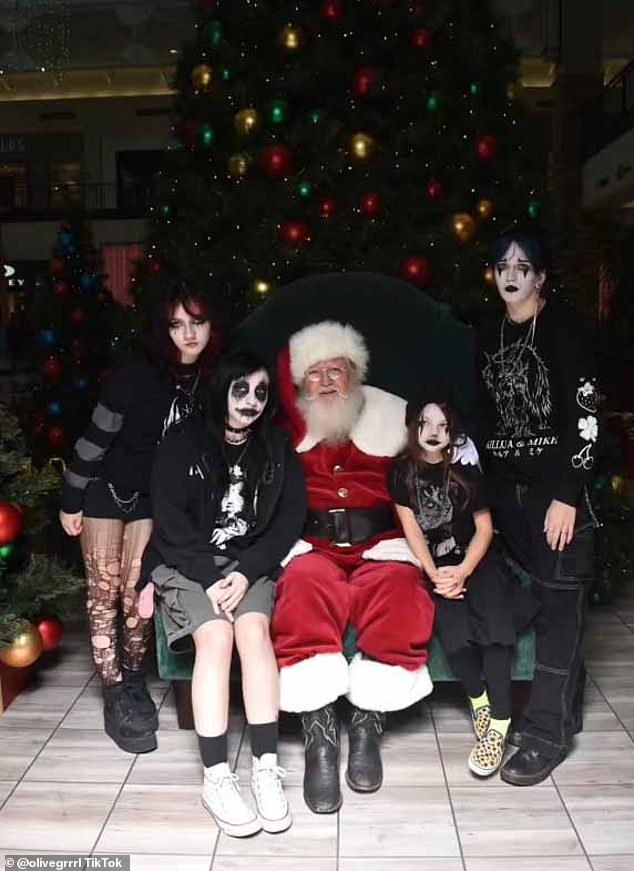 ‘For the Christmas card of course,’ @olivegrrrl captioned her video 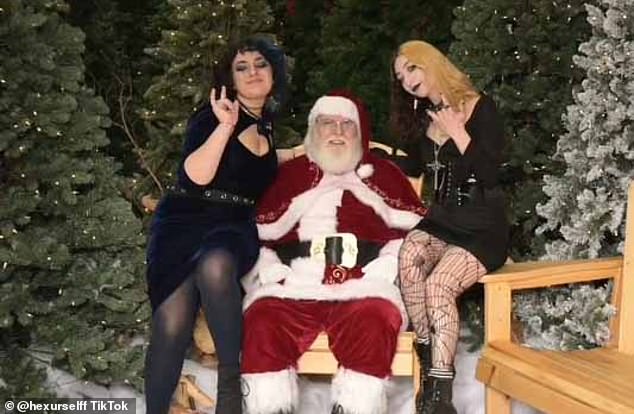 ‘It was so much fun,’ she wrote in the caption.

The video sparked some nostalgia for one viewer who recalled how she and her friends ‘used to do this as teens in Melbourne.’

‘I still have the pictures too!’ she noted.

And @luvkii_cosplay_ earned more than 1.1 million views after posting a video of herself and 10 of her goth friends surrounding Santa.

‘Merry Christmas from the homies,’ she wrote. 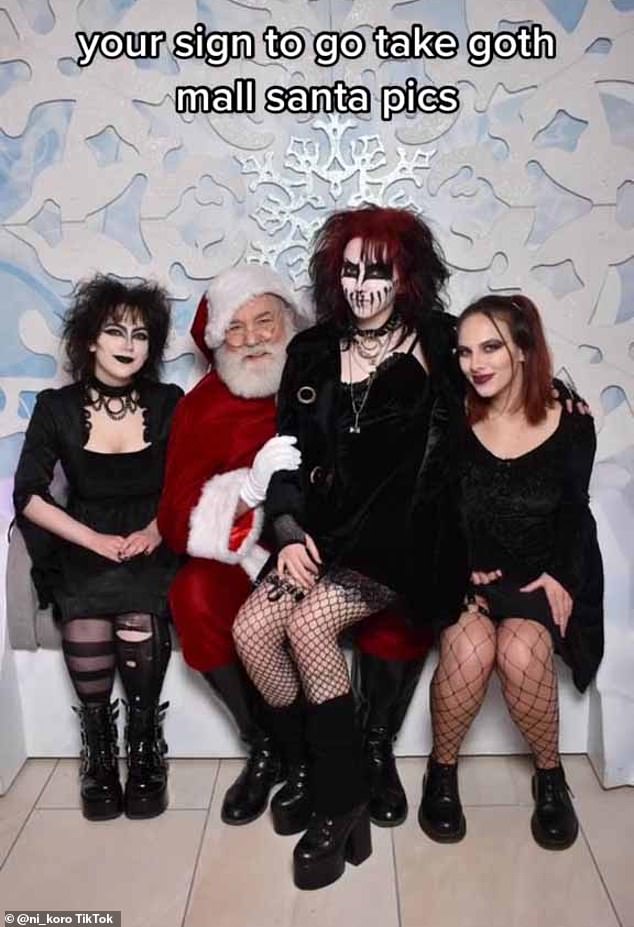 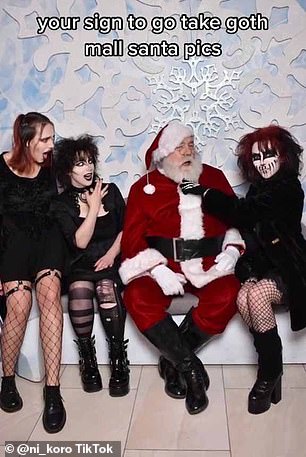 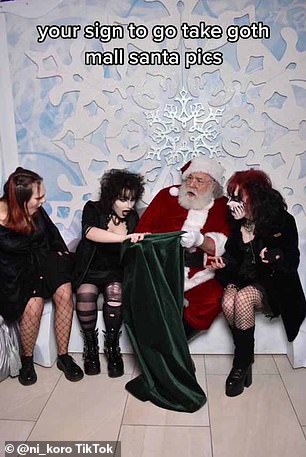 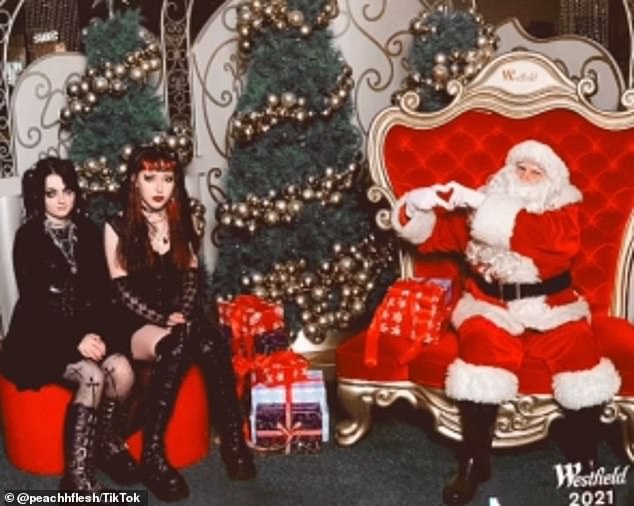 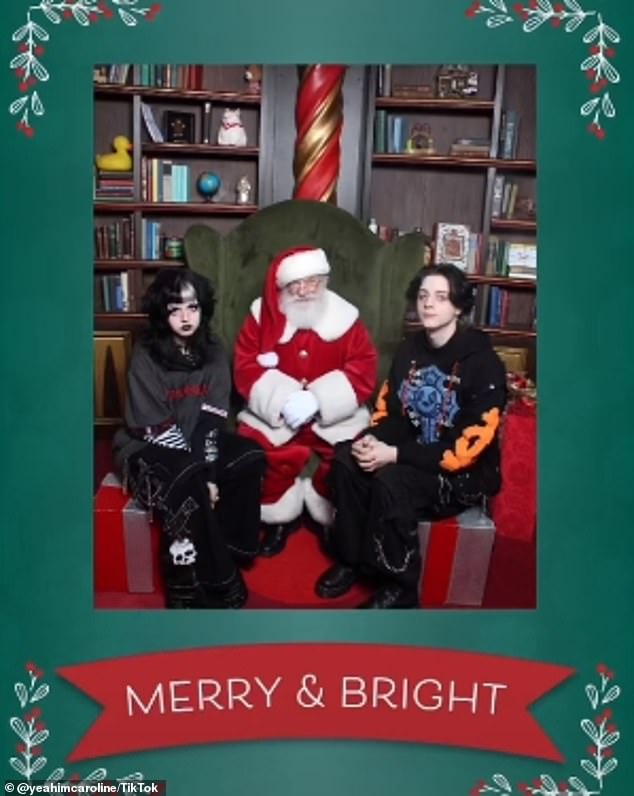 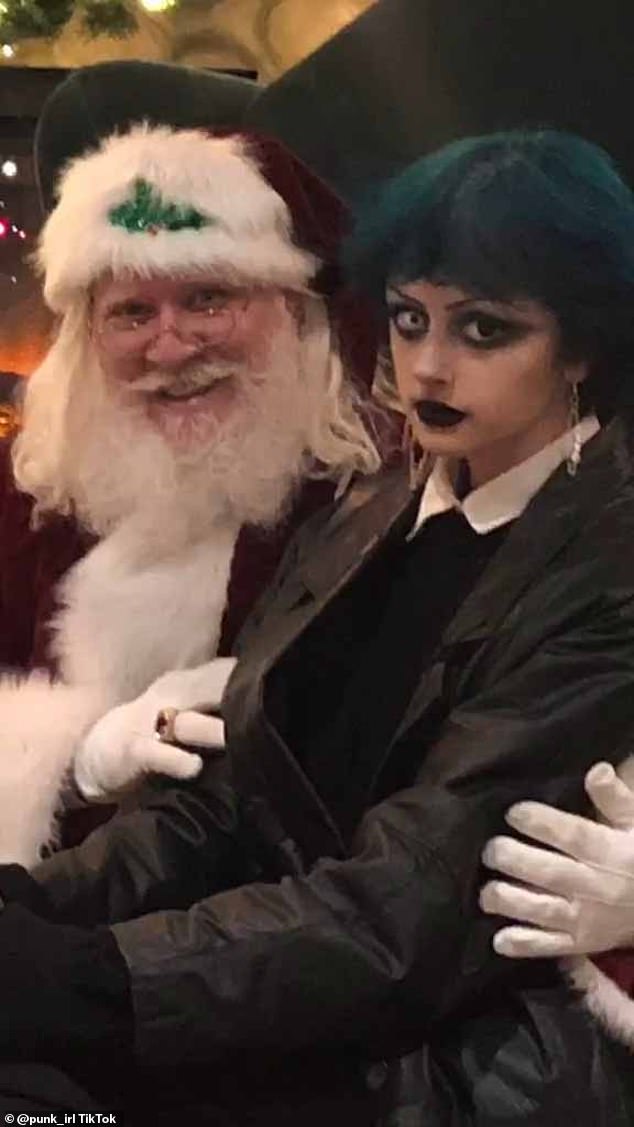 Meanwhile, @punk_irl shared her alternative holiday photo on the app back in 2020

In many of the instances, the Santa Claus in question seemed to enjoy the change of pace and was happy to try out some alternative poses.

There have been similar videos posted over the years, including popular clips from users @punk_irl and @yeahimcaroline, who shared theirs in 2020 and 2021, respectively.

And it seems like this trend is shaping up to become an annual tradition.

The search term ’emo santa’ already has a whopping 8.9 billion views on the app, while ‘goth pics with santa’ has a distant — yet still impressive — 17.1 million.