People are more likely to cheat when part of a large group, study finds

We’re more likely to cheat when we’re part of a large group, a new study reveals – likely because we think that other people are cheating too.

North American researchers examined whether competition pool size had any effect on people’s propensity to cheat on a word task to win prize money.

A larger number of competitors led participants to cheat more in the performance task to earn their undeserved reward, they found.

When people expect that others will cheat, they may be more motivated to convince themselves that doing so is acceptable, to avoid missing out on a share of a prize.

WHY DO WE CHEAT?

Notably, the desire to succeed in competitive contexts can sometimes drive people to cheat.

News stories, such as the recent college-admissions scandal involving wealthy parents who offered bribes to get their offspring into prestigious universities, and magazine articles, such as a recent piece describing how students feel pressure to cheat because they expect numerous peers to cheat, suggest cheating is common.

‘Given how frequently we encounter competitors throughout life, the current research seeks to understand whether having knowledge of the number of competitors can affect our propensity to behave unethically,’ the researchers say.

‘In many aspects of our professional and personal lives, we are put into competitive situations – those where the presence of others affects our own outcomes,’ say the three study authors, each from HEC Montréal, Kellogg School of Management at Northwestern University and Harvard Business School.

‘From winning a prestigious award and getting into an elite university, to securing an interview for a desired job and gaining a coveted promotion, success often depends on the number of people vying for the same reward.

‘Having a larger number of competitors increases expectations of the absolute number of cheaters in the competition group, which heightens perceptions that cheating is an acceptable social norm, which leads to more cheating.’

The study authors mention recent high-profile examples of cheating, such as the recent college-admissions scandal involving wealthy parents who offered bribes to get their offspring into prestigious universities, recently dramatised by Netflix.

British-Ghanaian philosopher Kwame Anthony Appiah also recently authored a piece for the New York Times Magazine entitled, ‘If my classmates are going to cheat on an online exam, why can’t I?’ where he addresses students’ concerns.

Students feel pressure to cheat because they expect numerous peers to cheat, suggesting that ‘cheating is common in competition pools and needs to be better understood’ the study authors point out.

In one of these three tasks, 327 US participants were randomly put into pools with 10 or 100 competitors.

They were asked to unscramble, within two minutes, eight word jumbles – for example, ETRNCA, which can be unscrambled to form the words ‘nectar’ or ‘trance’.

They were told they’d receive a bonus of $1 if their reported total number of solved word jumbles was within the top 20 per cent of their group.

But unbeknownst to the participants, the third, fifth, and seventh word jumbles were unsolvable.

Participants in the larger pool also expected a higher absolute number of cheaters in their group (even if the ratio of expected cheaters was similar across both pools).

This in turn made them feel that cheating was more acceptable than those in the smaller pool.

In this case, participants had three minutes to unscramble 10 words, and could win up to $10 for completing the task – although one word was unsolvable. 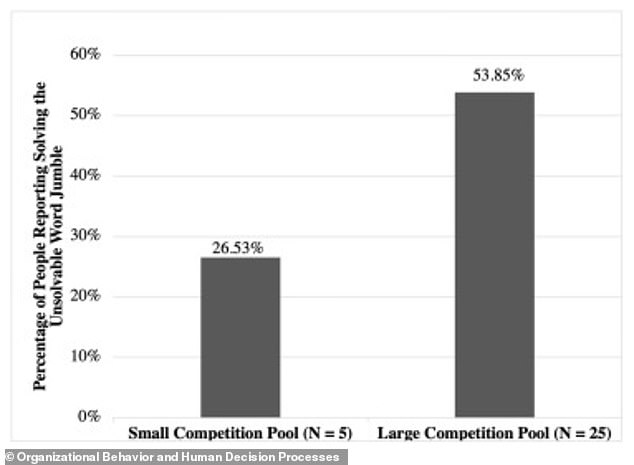 Proportion of cheating behavior for one of the conditions. There was a greater percentage of people who reported being able to solve an unsolvable task in the larger group

In one experiment, participants were only told that they would be completing a word unscrambling performance task.

However, after reading the instructions, instead of completing the task, participants responded to a questionnaire that gauged their attitude to cheating.

‘Our research suggests that being in larger, versus smaller, competition pools can trigger expectations of a higher absolute number of cheaters,’ said the study’s lead author, Celia Chui at HEC Montreal.

‘[This] in turn, increases the perception of cheating as acceptable, ultimately leading to more cheating.’

The study has been published in the journal Organizational Behavior and Human Decision Processes.

Invisible barrier is enough to stop kids cheating during exams – even if the answer is on the table next to them, study shows 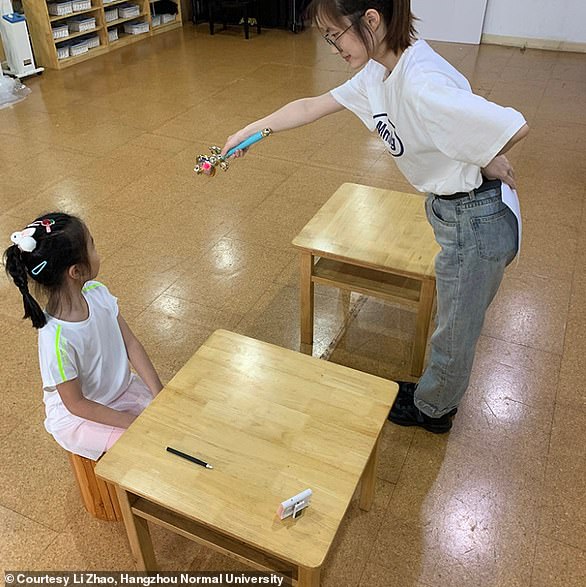 Barriermus! Even imaginary barriers drawn in the air with a ‘magic wand’ had the effect of reducing cheating during tests

An imaginary barrier cast with a toy wand is enough to stop children from cheating during exams, a 2020 study shows.

In experiments, psychologists demonstrated that a theoretical line was enough to prevent kids from sneaking a look at answers to a maths test on an adjacent table.

Researchers tested hundreds of children in several different scenarios separating them from the clearly visible answers – including using a metal barrier containing a transparent plastic sheet, a barrier with an empty frame and no barrier at all.

Just the concept of a magical invisible barrier, cast with a toy wand by the experimenters, discouraged cheating by more than 20 per cent, they found.

The metal barrier was also found to prevent the kids from taking a peep at the answers during experiments, despite not obscuring them.

‘When giving tests, teachers may consider making simple changes, like setting up tape lines between students to remind them not to copy from each other’s answers,’ said study author Kang Lee of the University of Toronto.