People around the world use a higher voice when speaking to babies, study finds

Baby talk is consistent across cultures: People around the world use a high-pitched singsong voice when speaking to young infants, study finds

We’ve all been there – you meet an adorable baby and immediately find yourself using an exaggerated, high-pitched singsong voice.

Now, a study has revealed that this ‘baby talk’ is universal, with people around the world transforming their voices when they speak to infants.

Researchers from Harvard University analysed recordings from people from 21 cultures and found that they all used a higher voice when speaking to babies than when they spoke to other adults.

‘Despite evident variability in language, music and infant care practices worldwide, when people speak or sing to fussy infants, they modify the acoustic features of their vocalizations in similar and mutually intelligible ways across cultures,’ the researchers wrote in their study.

We’ve all been there – you meet an adorable baby and immediately find yourself adopting an exaggerated, high-pitched singsong voice

WHAT IS BABY TALK?

Baby talk is a style of speech employed by adults when talking to an infant.

It is characterised by higher and wider pitch, slower speech rate and a ‘sing song’ pattern of intonation.

They say that chatting to babies under the age of one, helps them make friends, as well as making them brighter because they are better able to discover the world around them.

Baby talk is a certain style of speech employed by adults when talking to an infant.

While the style of talking has been extensively studied by evolutionary biologists, until now it’s remained unclear how baby talk varies across cultures.

In their new study, the team collected 1,615 recordings from 21 societies cross six continents.

‘We aimed to maximize linguistic, cultural, geographic and technological diversity,’ the team, led by Courtney Hilton, wrote in their study, published in Nature Human Behaviour.

‘The recordings document vocalizations in 18 languages from 12 language families and represent societies located on six continents, with varying degrees of isolation from global media, including four small-scale societies that lack access to television, radio or the internet and therefore have strongly limited exposure to language and music from other societies.’

By applying computational analyses to the recordings, the researchers were able to analyse the key acoustic features in the speech and song. 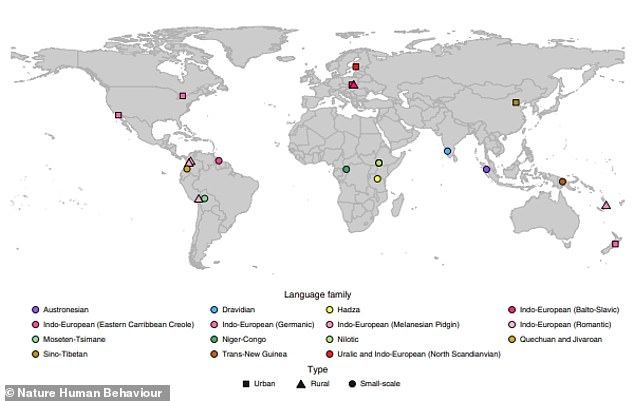 In their new study, the team collected 1,615 recordings from 21 societies cross six continents

Their results revealed that acoustic features consistently differed between adult-directed and infant-directed speech and song.

‘In speech, across all or most societies, infant-directedness was characterized by higher pitch, greater pitch range and more contrasting vowels than was adult-directed speech from the same voices,’ the researchers wrote.

‘The distinguishing features of infant-directed song were more subtle than those of speech but nevertheless corroborate its purported soothing functions.’

Next, the researchers played the recordings to 51,065 people from 187 countries, who spoke a variety of languages.

They found that listeners could accurately guess when vocalisations were directed at infants, regardless of the language being spoken.

‘The patterns of evidence reported here strongly imply a core set of cross-cultural acoustic and perceptual regularities that are also shaped by culture,’ the researchers wrote.

The team hopes the findings will help to improve our understanding of the evolution of human speech.

‘The results add to our understanding of human speech and song, and suggest that we alter our vocalizations towards infants in a way that is consistent across cultures and widely recognizable, and may have a common function,’ they concluded.

HOW IMPORTANT IS BABY BABBLE?

They say that chatting to babies under the age of one helps them make friends, as well as making them brighter because they are better able to discover the world around them.

There is some debate about how important it is and also if adults should use their normal voice.

Speaking more slowly, using a sing-song voice, and using strange words are commonplace when talking to tiny tots, but past research found that it may be detrimental to a child.

Conflicting research claims the high-pitched voice used when talking to a baby is essential.

‘Baby talk’ is believed by many to help with developing early speech and language skills.

These are associated with success in developing reading, writing, and interpersonal skills, both later in childhood and later in life.

Long before they can speak clearly, babies understand the general meaning of what you’re saying.

This bond is important in their development and happiness.