How good are your neighbours’ credit ratings? Interactive map reveals areas of the UK with the best and worst average credit scores

Britons’ credit scores have improved on average across the country, but no region can boast more than just a ‘fair’ rating, a new report has revealed.

People living in the South East have the highest average credit scores in the country, according to credit rating agency Experian’s analysis of its customers.

However, on a scale from ‘very poor’ to ‘excellent’, those living in the South East still only have a ‘fair’ credit rating, just like all the other UK regions.

Their credit score is on average 795, followed by the South West at 788 and London at 784, according to research.

A ‘fair’ credit score is somewhere between 721 and 880. That means that even the region with the lowest rating – the North East with a credit score of 727 – still falls into the ‘fair’ band, albeit at the lower end.

There are no regions with ‘good’ or ‘excellent’ score, nor with ‘poor’ or ‘very poor’ scores.

But the situation changes when looking in detail at specific areas.

The study, which also looked at 391 individual local authority and districts, shows the City of London has the best credit score at 871, which is at the higher end of the ‘fair’ band, almost in the ‘good’ category.

Chiltern, in Buckinghamshire, follows with a score of 859, as well as Wokingham, with a rating of 858.

At the other end of the spectrum is Kingston-upon-Hull, which has the lowest average score of 669, falling into the ‘poor’ credit score category.

The same goes for two neighbouring boroughs in Wales – Blaneau Gwent and Merthyr Tydfil – just ahead, with scores of 671 and 685 respectively.

The study also examines the different ages. Over 55s have the best credit score, while those aged between 26 and 30 have the lowest average score.

‘People who check their score regularly put themselves in a great position to identify where improvements can be made.’

Lenders look at your credit score when they decide whether to give you a mortgage, credit card or a loan. Your chances of bagging a good deal, or no deal at all, depend on how good or bad your credit score is.

Credit rating can also affect other products such as mobile phone contracts.

How to improve your credit score 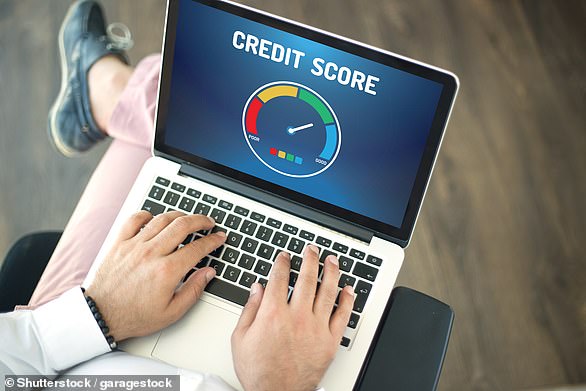 Britons’ credit scores have improved, but still rank just as ‘fair’ in all regions

There are some basic checks you can make to improve your rating: