Are YOU guilty? People reveal the bad behavior that indicates someone ‘wasn’t raised right’ – from mistreating restaurant servers to lying

People are sharing the telltale signs someone ‘wasn’t raised right,’ with many agreeing that bad manners and a lack of accountability are some of the top indicators of poor parenting.

More than 18,000 people have commented on the Reddit thread started by user sovereinete on Thursday, noting that leaving trash for someone else to pick up or mistreating restaurant servers are all red flags.

One of the most relevant responses came from someone who called out those who refuse to wear masks inside stores amid the coronavirus pandemic and then ‘attack essential employees for enforcing company policy.’

Red flags: Reddit users are sharing the telltale signs someone ‘wasn’t raised right,’ with many people calling out those who mistreat restaurant servers (stock image) 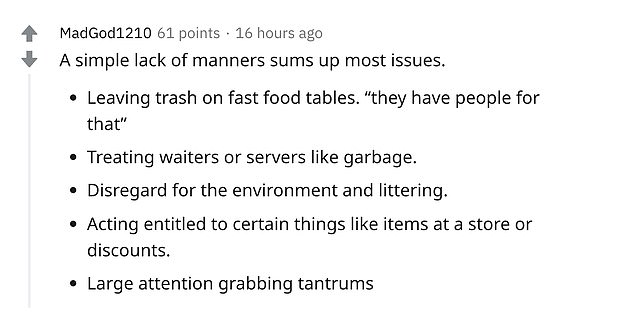 Speaks volumes: A lack of manners was a named as a top indicator of poor parenting

A number of Reddit users commented to say they have experienced similar mistreatment or heard awful stories of people being verbally abused simply for enforcing the rules.

‘Someone spat at a bus driver for this and told them they had COVID-19. Turns out the did and the bus driver died,’ one person wrote.

Another person’s friend who works at a popular cellphone retailer ‘keeps having customers flip out at him for telling them they have to wear a face mask.’

Many people noted that the way someone treats others, particularly those in vulnerable situations, is a strong indicator of how someone was raised.

Timely: One of the most relevant responses came from someone who called out people who attack essential workers for enforcing company rules amid the pandemic

‘Always pay attention to how someone treats service industry workers, animals, and young children,’ one person wrote, while another added that ‘how they treat people from whom they have nothing to gain’ is another sign.

‘They don’t say thank you to food servers…someone brings you food, you say thanks. It ain’t hard,’ someone else commented.

There were also plenty of Reddit users who are appalled by people who are entitled and refuse to clean up after themselves because they think it’s someone else’s job.

‘Who are the guys who spit out their chewing gum into urinals?’ one person asked. ‘I see this all the time at work, and I work in a high-end corporate place. Do they think it dissolves and goes down the pipe? The janitor has to pick that out.’

Are you guilty? Many people noted that leaving trash, mistreating animals, and having a lack of accountability are all red flags

Another said that if people ‘make messes in public areas and wander off,’ they weren’t raised right.

Someone else added to that by calling out those who ‘don’t put their shopping cart in the proper place when they’re done with it.’

One popular response was a ‘lack of personal accountability,’ namely those who ‘can never admit wrongdoing on their part’ and claim ‘it’s always someone else’s fault.’

‘My dad used to come home and at dinner it was always ‘this person did that stupid thing at work’, but never something that he did wrong. Now my first instinct is to always look at someone else first,’ one person admitted.

‘It’s not as severe as what you describe, as I do blame myself, but only after looking at others first. It’s a very difficult thing to overcome, you know you’re a d******d but it lies very deep.’