Wedding guests are revealing the most cringe-worthy things they have ever seen happen at ceremonies, detailing disastrous ministers, bizarre behavior by the bride and groom – and some very inappropriate speeches.

Thousands of people took to Reddit to share their most embarrassing wedding memories, after one user questioned, ‘What’s the cringiest thing you’ve seen a bride and groom do for their wedding?’

Although the thread was initially restricted to brides and grooms, many of the responses detailed bad behavior from other guests at the wedding, as well as members of the clergy, and family members.

Awkward! Wedding guests have opened up about the most cringe-worthy things they have ever seen happen at ceremonies in a hilarious thread on Reddit (stock image)

One poster recalled how the bride and groom at a wedding chose to play out a bizarre scenario in which she played a ‘damsel in distress’ while he acted out the role of James Bond, who zip-lined into the wedding to ‘save her’.

‘[The bride and groom] made this whole scenario where the bride was like a damsel in distress and the groom was James Bond and he got on a zipline and did this whole thing to “save her” and then kiss her,’ the Redditor posted.

‘They even put the 007 music and everything. it was brutal to watch.’

Another person revealed that the bride and groom they know shared their first dance with a giant Minnie Mouse and Mickey Mouse – revealing how guests were left in horror and hysterics while they watched on.

‘You know those slightly off-looking Mickey and Minnie mouses you see in NYC?’ the person asked, before adding: ‘Yeah, they showed up for the first dance because the bride loved Disney.

‘The entire room was forced to watch bride and groom dance alongside a deformed Mickey and Minnie, and halfway through they switched so the bride was dancing with Mickey and the groom with Minnie. I’ve never seen such a strange combination of stifled laughter and horrified stares.’ 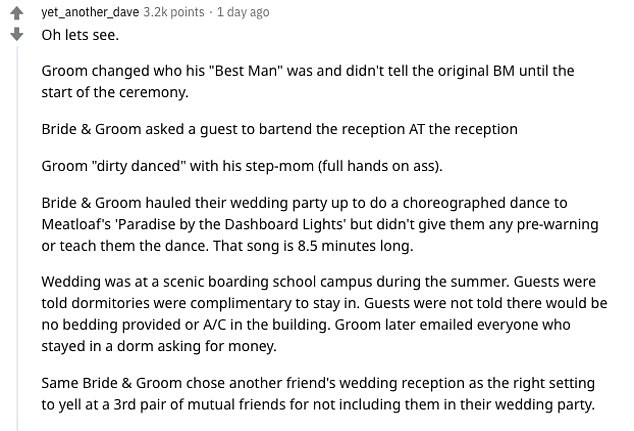 Oh dear: After a Reddit user asked people to share the ‘cringiest thing you’ve seen a bride and groom do for their wedding’, thousands of people responded with examples

Something for everyone: Several Redditors shared stories about other people behaving badly at weddings – including ministers and pastors

One person opened up about a series of mess-ups at one particularly uncomfortable wedding that saw the bride and groom treating many of the guests – their closest friends – terribly.

First, the groom chose to change his best man at the last minute – but failed to tell the original pick until the ceremony had actually started.

Then, the bride and groom ‘asked a guest to bartend the reception at the reception’, before the groom ‘”dirty danced” with his step-mom’, putting his hands on her butt while doing so.

And the nightmare didn’t stop there.

According to the poster, the newlyweds ‘hauled their wedding party up to do a choreographed dance to Meatloaf’s ‘Paradise by the Dashboard Lights’ but didn’t give them any pre-warning or teach them the dance’.

The poster concluded: ‘Wedding was at a scenic boarding school campus during the summer. Guests were told dormitories were complimentary to stay in. Guests were not told there would be no bedding provided or A/C in the building.

Shocking: People shared all kinds of stories, including one person who revealed that the minster began flirting with the bride – his ex girlfriend – during the cderemony

‘Groom later emailed everyone who stayed in a dorm asking for money.

‘Same Bride & Groom chose another friend’s wedding reception as the right setting to yell at a 3rd pair of mutual friends for not including them in their wedding party.’

And it isn’t just brides and grooms that are guilty of awkward slip-ups at weddings, according to several other Reddit users who took the opportunity to detail some truly embarrassing moments that were the fault of family, friends, and even the ministers and pastors responsible for the ceremony.

‘Not the couple, the Pastor kept saying “Our Heavenly Father, Daddy God,” while marrying them,’ one person wrote, adding: ‘For context it was a military wedding.

‘It was just the couple and the pastor, it was live streamed on Twitch, and the pastor was probably about 25. It was in Hawaii. He was wearing flip flops, and a lei made of fake flowers.’

One of the most popular responses to the question came from someone who works in the wedding industry, and has attended more than 3,000 weddings.

The poster offered advice for anyone planning their nuptials in the future, listing the various slip-ups that they have seen go wrong in the past – from couples who have chosen to sing their vows to awkward jokes about sex during speeches. 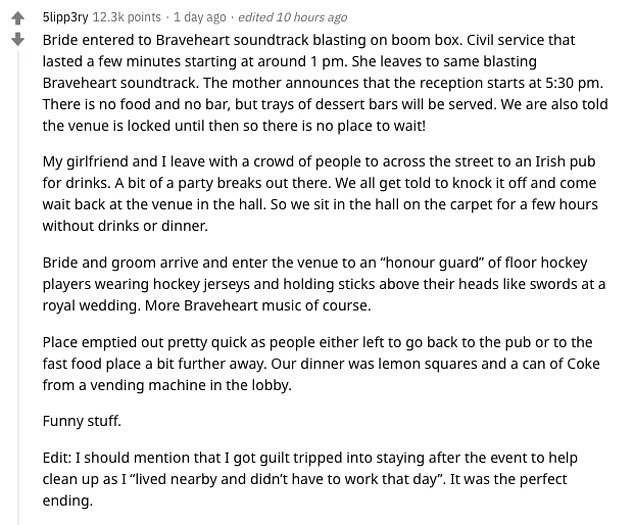 Disaster: Many people opened up about awfully organized ceremonies that saw guests left without food or drink for hours on end – while others detailed bad bridal behavior 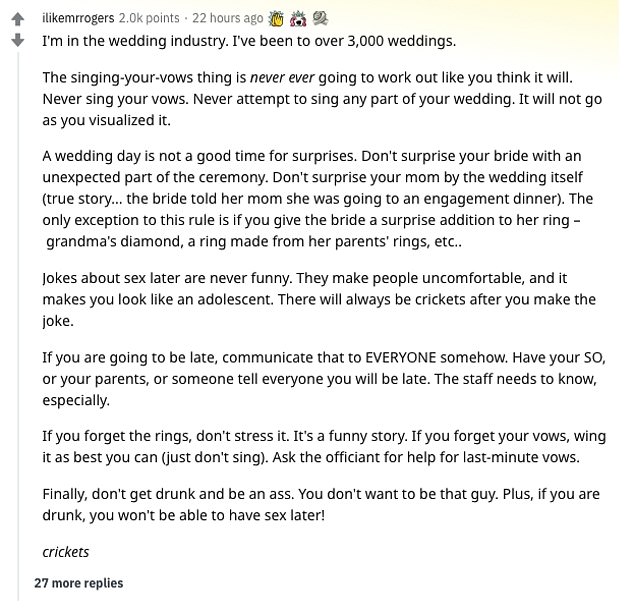 Advice: One person who works in the wedding industry shared their advice for how to avoid an awkward or cringe-worthy scenario at a ceremony

‘I’m in the wedding industry. I’ve been to over 3,000 weddings,’ they wrote. ‘The singing-your-vows thing is never ever going to work out like you think it will. Never sing your vows. Never attempt to sing any part of your wedding. It will not go as you visualized it.

‘A wedding day is not a good time for surprises. Don’t surprise your bride with an unexpected part of the ceremony. Don’t surprise your mom by the wedding itself (true story… the bride told her mom she was going to an engagement dinner). The only exception to this rule is if you give the bride a surprise addition to her ring – grandma’s diamond, a ring made from her parents’ rings, etc..

‘Jokes about sex later are never funny. They make people uncomfortable, and it makes you look like an adolescent. There will always be crickets after you make the joke.

‘If you are going to be late, communicate that to EVERYONE somehow. Have your SO, or your parents, or someone tell everyone you will be late. The staff needs to know, especially.

‘If you forget the rings, don’t stress it. It’s a funny story. If you forget your vows, wing it as best you can (just don’t sing). Ask the officiant for help for last-minute vows.

‘Finally, don’t get drunk and be an ass. You don’t want to be that guy. Plus, if you are drunk, you won’t be able to have sex later!’