People who drive or cycle with earphones are more than four seconds slower to identify potential road hazards, according to a new study from Ford.

The car maker recruited more than 2,000 participants from Europe, put them into an immersive virtual street and measured their reaction times to hazardous situations.

It tested them in different scenarios with different road hazards, both with and without music blaring through headphones as a comparison.

Ford is now letting the public try out the virtual experience themselves with their smartphones, as part of its ongoing road safety campaign.

People who drive or cycle with earphones are more than four seconds slower to identify potential road hazards, according to a new study from Ford

WHAT IS 8D AUDIO?

8D is a new sound technology that makes our brains think audio is coming from several directions.

It can be applied to existing songs, making it seem like the audio is constantly moving.

When listening to 8D with headphones, it creates the illusion that the audio is coming from a point in the distance and is audible to people around us.

The directional sound is achieved through a complex process of panning and equalisation, enabling highly realistic sound – an emergency services vehicle approaching from behind, for example.

‘With this research we are highlighting an important road safety issue that often goes under the radar,’ said Emmanuel Lubrani at Ford of Europe.

‘Accessible to anybody with a smartphone, we hope that our Share The Road: Safe and Sound experience will raise awareness of the reality of wearing headphones while on the move.’

Wearing headphones while on the road – as a driver, cyclist, e-scooter rider or pedestrian – can be dangerous, and in some countries, including France, it is illegal (but not in the UK).

Research has indicated that the reduction of vehicle and roadway sounds can make drivers underestimate vehicle speed both in a lab setting and on the road, and when driving during the day and at night.

In 2016, there were 2,886 road crashes in Britain in which distraction in the vehicle was deemed a contributory factor, making up three per cent of all road accidents, the Department for Transport reported.

Some of the newest earphones on the market even have noise cancelling technology, meaning drivers are at an even greater risk of not being aware of their surroundings. 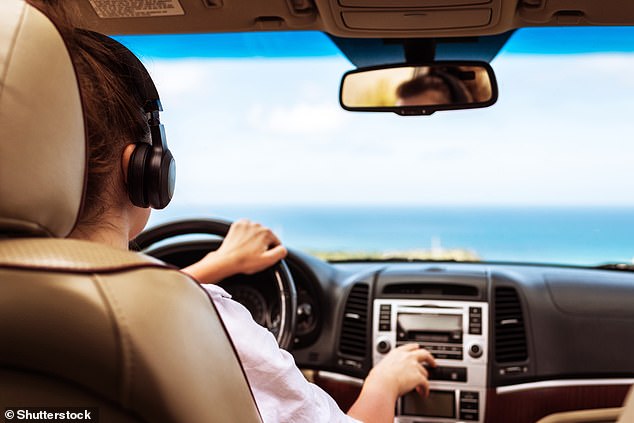 In the UK, it is not illegal to drive while wearing headphones – but you could be fined for doing so if it’s deemed as driving without due care and attention, or careless driving

The Ford-commissioned research investigated the road use and listening habits of 2,504 people, both men and women – around 500 each from France, Germany, Italy, Spain and the UK.

The participants were asked about their attitudes to risk while driving, cycling, walking or riding a scooter.

Most of those who took part said they listened to headphones while on the move.

Among the 56 per cent who said they’d been involved in a near miss or an accident, 27 per cent were wearing headphones at the time.

Participants were then invited to run Share The Road: Safe And Sound on their smartphones to measure the impact that wearing headphones had on their ability to react to audio cues.

The experience presents three road simulations, each with different hazards to look out for – an ambulance, a motorbike and an e-scooter.

‘The following experience includes the sound of road accidents,’ it says. ‘You should stop at any time if you find this upsetting. Your task is to identify the hazard as soon as you can.’

As users travel along the 360-degree virtual road, they have to identify the vehicle and tap on it before the timer runs out.

Users experience each scenario twice – once with loud music playing as if through a pair of headphones, and one without music. 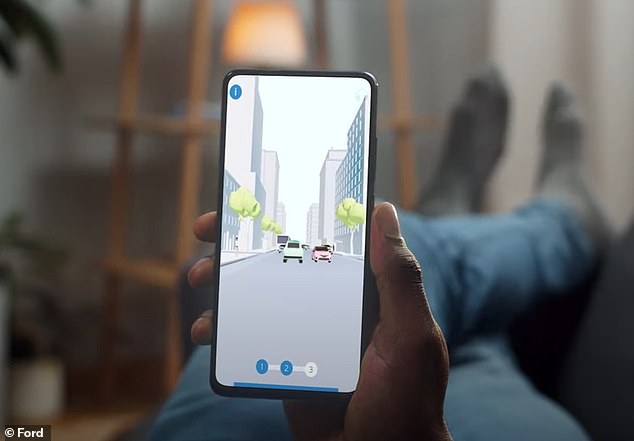 Ford has now made the Share The Road: Safe and Sound app experience available to everybody to see how important audio cues can be when on sharing the road with othe

In its experiments, Ford found that, on average, participants were 4.2 seconds slower to identify and respond to a hazard on the road when music was playing.

After undertaking the experience, most participants said they would not wear headphones on the move again.

‘Sound plays a vital role in our ability to understand our environment – we very often hear important events happening around us before we see them,’ said Dr Maria Chait, professor of auditory cognitive neuroscience at University College London.

‘While headphones can be beneficial to us in many circumstances, on the road they can block out important sound cues, meaning we might not be able to perceive nearby vehicles or road users, potentially putting them – and us – in danger.’

The new experience is part of Ford’s ongoing Share The Road campaign, which aims to improve road safety and ‘encourage a spirit of understanding and respect between every road user’.

In the UK, it is not illegal to drive while wearing headphones.

British automotive firm RAC explains: ‘While there is no specific law that clearly states it’s not legal to drive while wearing headphones, it is highly unadvisable because it can be dangerous.

‘Not only could it see you charged with dangerous driving, loud music could also stop you from hearing emergency vehicle sirens, level crossing warnings, other road users and pedestrians approaching your vehicle.’

But the law is not black and white. Wearing headphones while driving could come under a driving offence, like driving without due care and attention, if a police officer deems it so.

So if pulled over by police, you could still be fined thousands of pounds for driving while wearing headphones if it is deemed to present a sufficient distraction.

Rule 148 of the Highway Code also states that safe driving and riding needs concentration, and therefore drivers and riders should avoid distractions such as loud music that could mask other sounds.

Headphones affects the auditory, visual and cognitive awareness of cyclists and pedestrians.

The UK government does point out, however, that it’s illegal to hold a phone or sat nav while driving or riding a motorcycle.

‘You must have hands-free access, such as: a Bluetooth headset, voice command, a dashboard holder or mat, a windscreen mount, a built-in sat nav,’ it says on its website.

The use of headsets is also prohibited in some states of the US and Canada.