The People’s Convoy – a roving protest against vaccine mandates modeled after Canada’s Freedom Convoy – continues to make loops around the Washington, DC Beltway as their demands grow beyond ending COVID rules.

Their demonstration, which now consists of about 100 semi-trucks and a smattering of vans and pickups, are updating their list of grievances as COVID restrictions disappear nationwide, and continue to take aim at the Biden administration.

They’re still calling for an end to the few that remain: A national emergency order that was extended in February, the ongoing mask mandate on airplanes and trains, and the vaccine requirements for members of the military.

But on Friday, organizers called on the mostly white crowd to remove the giant Black Lives Matter sign painted on 16th Street NW, in front of the White House. ‘We’re going to take it back,’ one organizer said, according to the New York Times.

Some are also calling for an end to the Biden administration altogether, although they faced embarrassment over the weekend thanks to one single cyclist.

On Saturday, video from DC showed a lone man in a bicycle pedaling slowly in front of a row of trucks honking their horns in frustration.

‘What are you doing? You got a bunch of trucks behind you,’ one man asked in video posted on Twitter.

‘I can’t hear you, I’m sorry, it’s too loud,’ the man replied as he rode down the street.

The roving People’s Convoy, a protest against COVID-19 mandates and restrictions, continues to loops around the Beltway in Washington, DC. Above, traffic on Friday 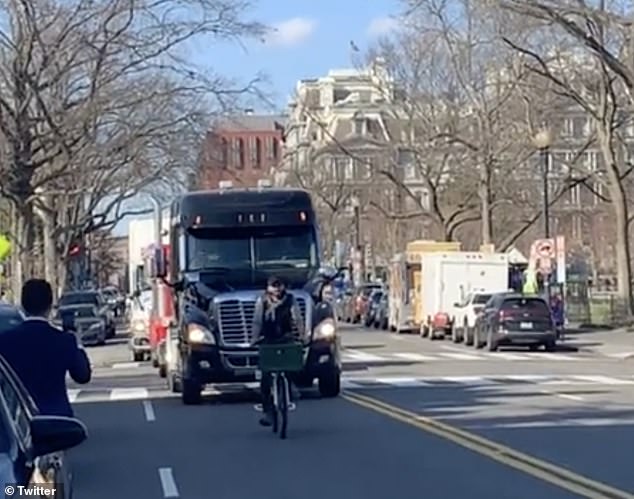 On Saturday, video posted by a reporter showed a lone man in a bicycle pedaling slowly in front of a row of trucks honking their horns 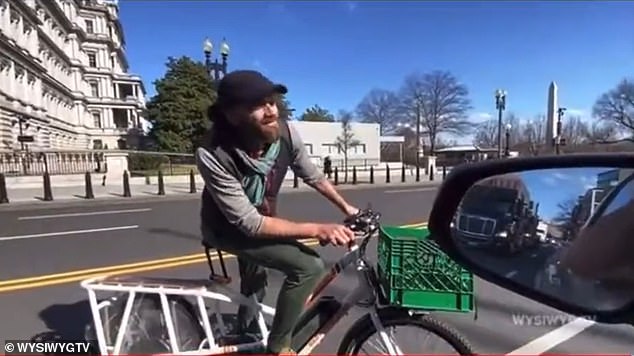 ‘What are you doing? You got a bunch of trucks behind you,’ one man asked him 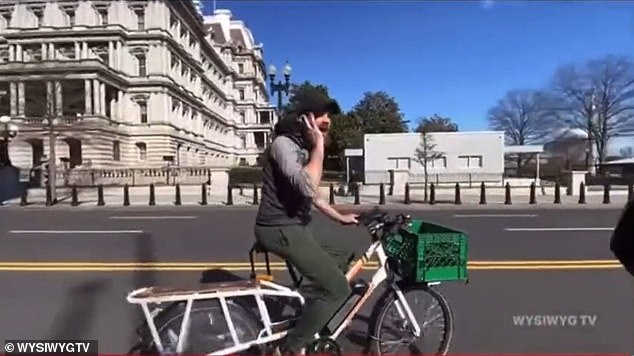 ‘I can’t hear you, I’m sorry, it’s too loud,’ the man replied as he continued to pedal slowly 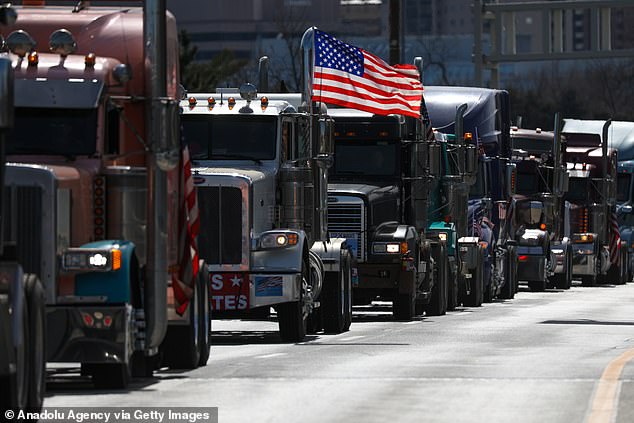 The convoy, modeled after a similar but much larger protest in Ottawa, now consists of about 100 semi-trucks and a smattering of vans and pickups. Above, the convoy on Wednesday

The man, dressed in green pants and a sweater vest, appeared determine to slow down the protesters as they honked down the streets of the capital.

The convoy first arrived in DC on March 4, after a 2,600-mile, 11-day journey across the US from California. The number of people who have attended various demonstrations associated with the larger movement has since fluctuated.

As of Saturday, the daily protest consisted of about 100 trucks and some pickups, cars and camper vans, the New York Times reported.

The convoy said it would not be in DC on Sunday after protesting in the area for more than two weeks, according to WJLA.

At one point on on Wednesday afternoon, traffic was at a standstill on the 14th Street Bridge, with some of the truckers getting out and standing on the side of the road.

Protesters are blaming the gridlock on police.

‘We’ll be satisfied when Biden’s gone, when Harris is gone and Pelosi’s gone,’ said Curt Martin, 73, a truck driver from upstate New York.

‘When they’re gone, we’ll be happy. We’ll go home. But not until then.’

The convoy’s mission creep is likely the result of fewer restrictions as case and hospitalization rates from the Delta and Omicron variants subside.

In his State of the Union speech earlier this month, President Biden said, ‘Because of the progress we’ve made, because of your resilience and the tools we have, tonight I can say we are moving forward safely, back to more normal routines.’

The convoy is calling for an investigation into the origins of COVID and the government’s response along with encouraging state-level protests against local restrictions, which are slowly dwindling. 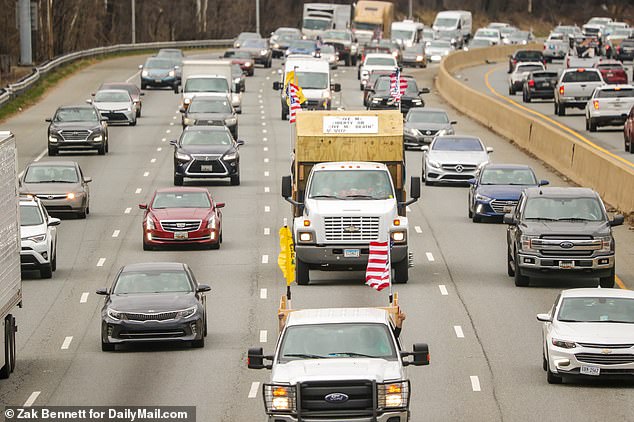 The People’s Convoy, above on March 7, is updating its mission as COVID restrictions dwindle across the country 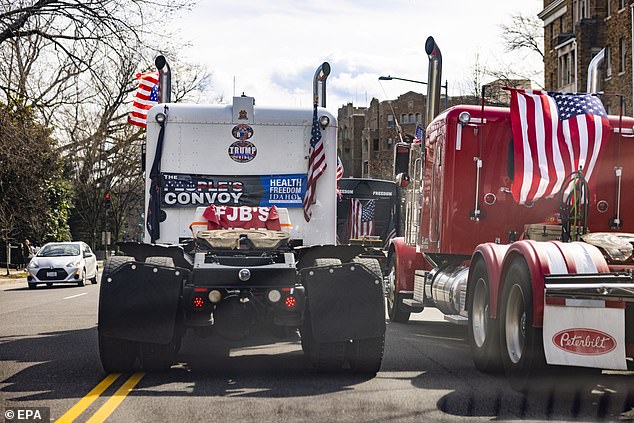 The convoy first arrived in DC on March 4, after a 2,600-mile, 11-day journey across the US from California. Above, the convoy on Friday 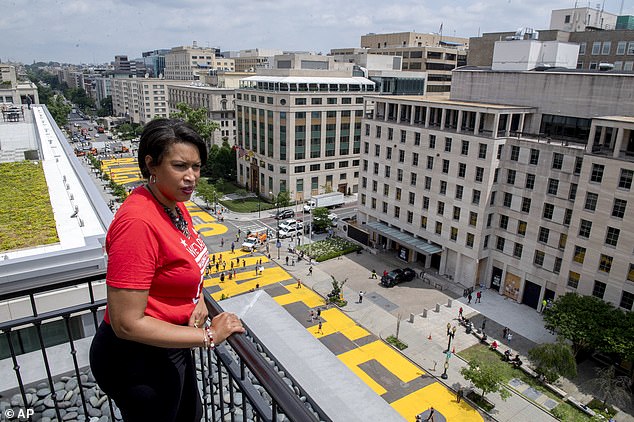 On Friday, organizers called on the mostly white crowd to remove the giant Black Lives Matter sign painted on 16th Street NW. Above, DC Mayor Muriel Bowser near the sign in June 2020

The Los Angeles Unified School District, the nation’s second-largest public school district in the nation, announced Friday that it will lift face-covering requirements for students and staff.

Now, the district of more than 600,000 students and 30,000 teachers will only ‘strongly recommend’ – not require – the usage of masks indoors.

The woke commissioner argued he wanted to mask children because under fives are not vaccinated.

‘As a father of a two-and-a-half-year old-and two other older kids, I want to keep them as safe as possible. I would love nothing more than to send my son to daycare without a mask,’ Vasan said, according to CBS New York. 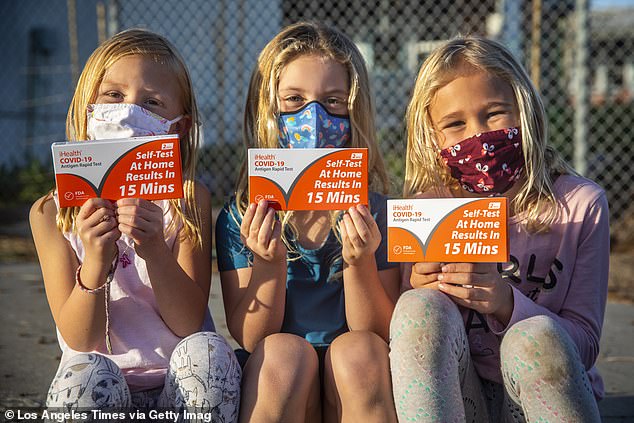 While masks will no longer be required inside Los Angeles Unified School District buildings, students and staff will receive PCR tests through the end of the school year, and at-home rapid COVID tests will be provided to students and staff ‘for baseline testing prior to the beginning of the 2022 Spring break’ 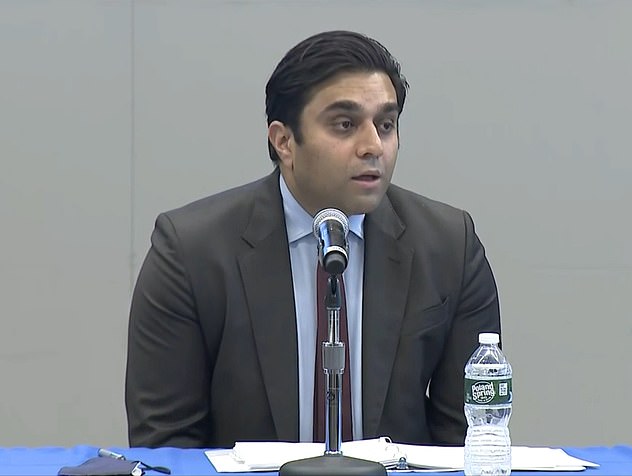 His comments sparked fear and fury among frustrated New York parents who face having to force their young children to keep wearing a mask in the face of mounting evidence that they are at little risk.

It also comes as every state, including California which ended its mandate last week, has lifted or announced plans to lift masking requirements in schools.

The lone holdout is Hawaii, which is dropping its indoor mask mandate on March 26 but expected to extend the requirement for schools.

The DC convoy hasn’t had nearly the safe effect as the one that paralyzed Ottawa last month with estimates of as many as 1,155 vehicles occupying the city’s downtown streets.

Sen. Ted Cruz of Texas and Pennsylvania state Sen. Doug Mastriano, who chartered buses to Trump’s Stop the Steal rally before the Capitol riot, have both met with the DC convoy, the Times reports.

At least nine other Republican lawmakers have met with the organizers.

On March 10, Cruz waved to fellow demonstrators as he thanked them for showing up while the truckers let their horns blare. 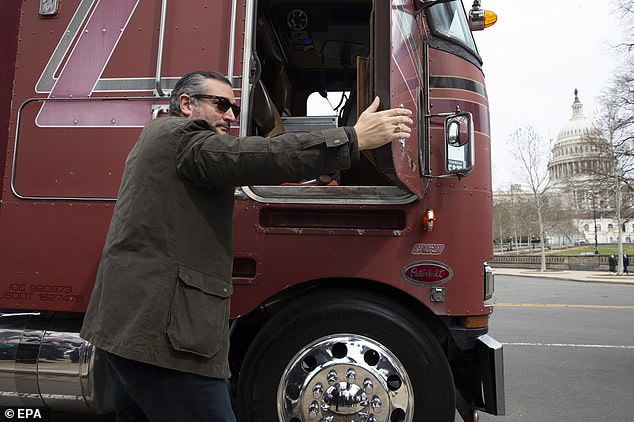 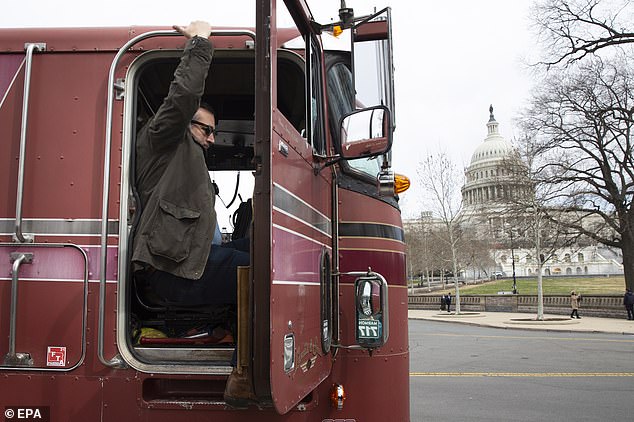 The Republican senator rode shotgun with the truckers around Washington, DC

Cruz also stood alongside People Convoy leader Brian Brase, 37, who said the protest was not just a Republican movement, but a demonstration by a wide range of Americans who want to remind the government that it works for the people.

‘Now is the time for the American people around the county… to stand up for your personal freedoms,’ Brase told reporters on Wednesday.

The caravan consisted of about 3,000 vehicles that day.

‘Thank you to The People’s Convoy for speaking out for freedom,’ Cruz said in a statement.