By Derek Hunter for MailOnline

Kevin De Bruyne was hailed the humble hero by Pep Guardiola after his goal took Manchester City back to the top of the Premier League.

‘Everyone is talking about Kevin De Bruyne,’ said City boss Guardiola, after the midfielder’s long-range left-footer handed Chelsea their second defeat of the season.

‘He was outstanding,’ said Guardiola. ‘He makes absolutely everything. He is the most humble guy. 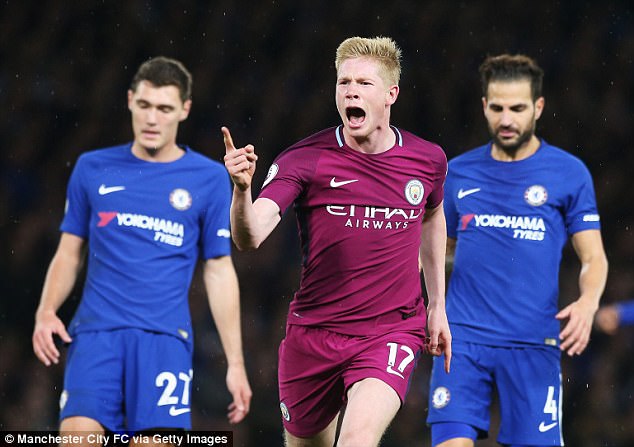 ‘I’m so happy for him because I know how happy he is.’

He added: ‘The most important thing is to win the game but the way we played, especially in the second half, was pleasing.

‘We had control and in the second half we adjusted our possession and the way we attacked. They could not play and had to do long balls.’

De Bruyne was sold by Chelsea when Jose Mourinho was in charge.

When asked if the win therefore was that much more sweeter, the Belgian said: ‘No, that’s the past.

‘What happened, happened and I have no regrets coming here. It made me stronger.’ City dedicated their victory to defender Benjamin Mendy, whose season is all but over after he ruptured his anterior cruciate ligament. 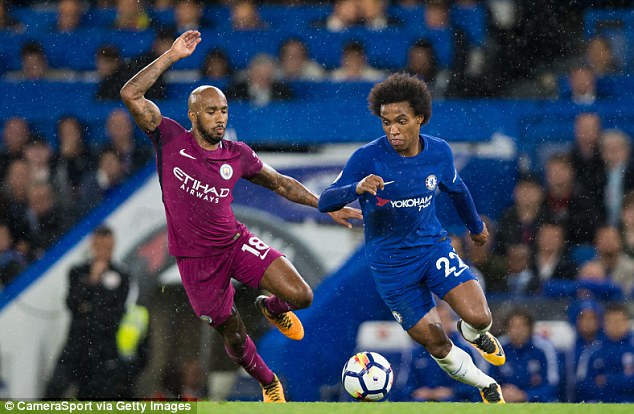 Fabian Delph said: ‘That performance there was for one of our team-mates, Benjamin Mendy.

‘He left us a message before the game and we knew we had to do it for him. If you’re watching, that’s for you, big man.’

And Delph believes the victory over the defending champions has sent a chilling warning to all their title rivals.

‘It sends out a massive message,’ he said. ‘We needed to come out on top today. There’s a togetherness in the team and you could see that on the pitch today.’