Manchester City are expecting Kevin De Bruyne to prove his fitness for Thursday’s clash against Tottenham after an injury scare on Tuesday.

De Bruyne did not train with Pep Guardiola’s squad at the City Football Academy ahead of a Premier League game they can ill-afford to drop points in.

City have fallen eight points behind leaders Arsenal after the weekend derby defeat and losing their talisman for Tottenham’s visit would be a significant blow.

But Guardiola is confident that De Bruyne will be ready to play a part, while City have also been handed welcome news in defence.

John Stones and Ruben Dias have both trained this week after fitness issues, offering more options at the back.

Dias has not played since aggravating a hamstring injury during the World Cup, while Stones missed the trip to Old Trafford. The pair have not started together in the Premier League since September.

Meanwhile, City are expected to open talks with Julian Alvarez’s representatives over an extension to his contract at the end of the season. Alvarez impressed at the World Cup winners Argentina and has scored eight goals in 23 appearances for City since making a £14million switch from River Plate. 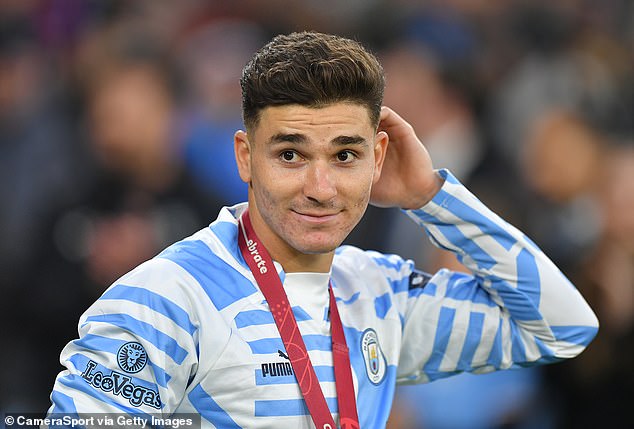