Parents who took their children to a soft play centre had more fun than their kids by giggling at a Peppa Pig character’s ‘wardrobe malfunction’.

Sonya, 37, and her husband, Paul Heard, 43, had taken their two-year-old daughter Florence to a play centre on Monday when George, from the much-loved Peppa Pig series, had struggled to dress himself properly.

The couple, from Ashby de la Zouch, Leicestershire, were the first ones to notice George’s ‘piggy willy’ and alert the dozen parents to the unfortunate song choice. 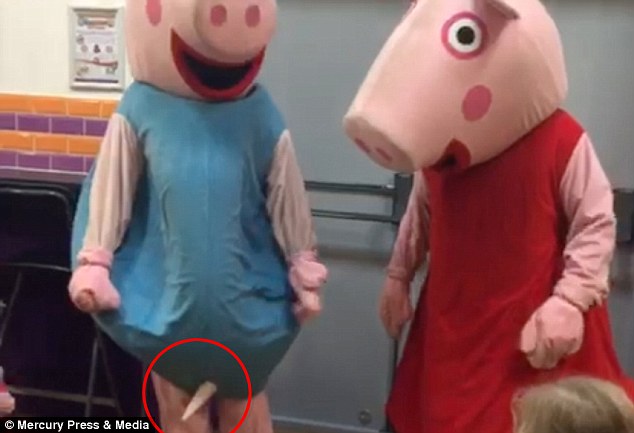 As the characters were singing the ‘Hokey Cokey’ parents noticed George’s tail, left, on his costume was back-to-front, giving the illusion he was shaking his genitals ‘in and out’ 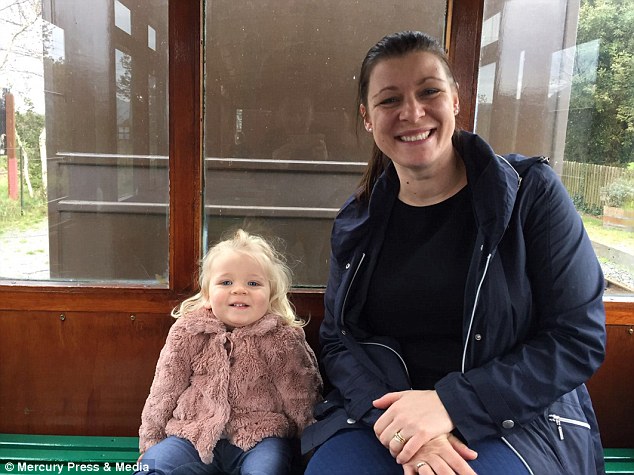 Sonya Heard, 37, right, pictured with her daughter Florence, left, alerted other parents to George’s misfortune which caused much hilarity among the adults

In the clip, the two mascots dance along to the Hokey Cokey while surrounded by a circle of toddlers. George dances with his on-screen sister completely oblivious to his little tail poking out the front of his suit and flashing his audience.

Sonya said: ‘When I noticed he had a “piggy willy” I couldn’t stop laughing and what made it worse was the song. I’ll always laugh now when Florence is watching Peppa on the TV.

‘The kids obviously didn’t have a clue and were dancing along to the music, mesmerised by the characters. Florence is such a girly-girl and loves dancing so she was really enjoying it. She’s mad about Peppa Pig and Frozen.

‘When I noticed George’s tail was sticking out at the front and he’d clearly put the suit on the wrong way, I couldn’t stop laughing. Even my husband was laughing his head off. 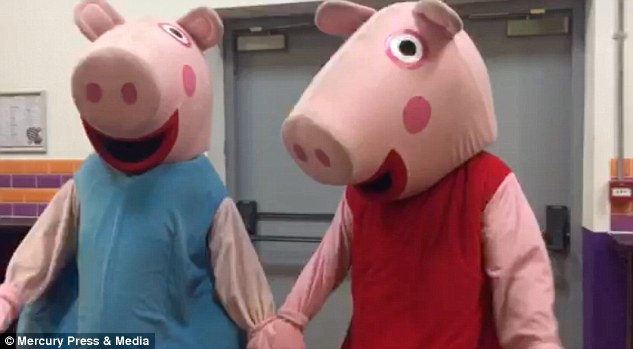 The children were completely oblivious as to why their parents were laughing at George, left

‘The best part was that he was dancing to the Hokey Cokey with the lines “in, out, in, out, shake it all about” and wiggling it around.

‘When I pointed it out to the other mums, they were in hysterics too. I don’t think either of the characters had any idea what we were laughing at.’

The midwife and mother of four had taken her youngest child to the play area for a day out during half term and believes the faux-pas was probably due to them rushing around.

Sonya said: ‘We’d taken Florence to the soft play for a day out like we do once a week and it’s a pretty common thing that they do, having different characters appear to do sing-a-longs with the children.

‘I think what had probably happened is they’d obviously put the suit on the wrong way in a hurry.

‘The characters will usually perform a few songs for the kids then leave.’