Authorities say John Wright Martin, 33, has disappeared amid allegations that he embezzled $3million from a Texas couple while working for them as a personal assistant from 2014 to 2016

A personal assistant accused of embezzling $3million from a Texas couple and using the money to support his extravagant lifestyle has disappeared.

Multiple warrants have been issued for the arrest of John Wright Martin, a 33-year-old accused of stealing millions from his former employers, prominent Frisco business owners Randy and Kathy Pitchford.

An article in this week’s Dallas Morning News describes how Martin managed to fill his closet with pricey designer labels, drive luxury cars, jet off on impressive international vacations and donate tens of thousands of dollars to charity despite only earning $45,000 annually as a personal assistant.

The alleged con artist is said to have relied on his boyish charm and Texas drawl to create a false sense of trust among those around him as he scammed them out of millions over the course of several years.

At the center of the allegations against Martin are the Pitchfords, who hired him to help out with administrative matters in 2014 – unaware of the long list of brushes with law enforcement in his past. 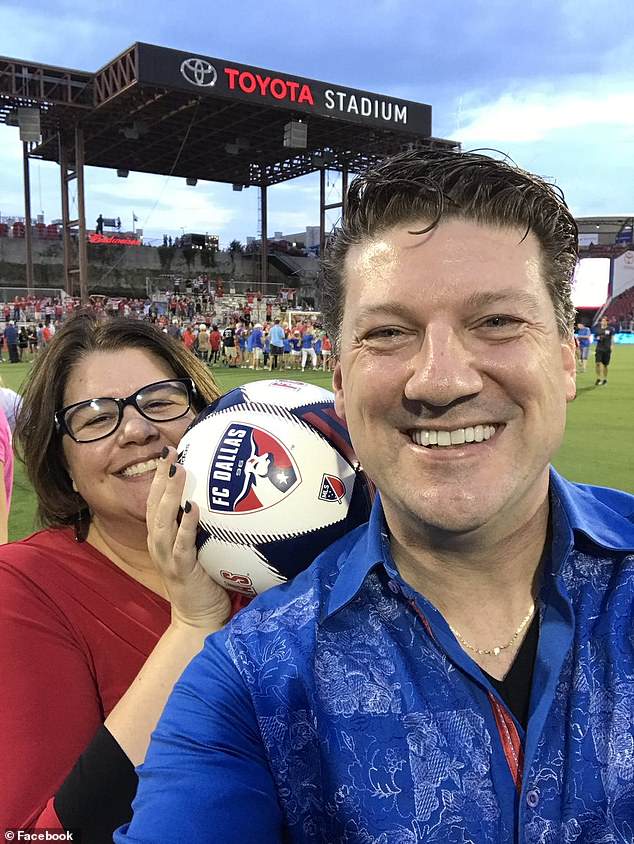 Martin is accused of having stolen millions from Frisco couple Kristy and Randy Pitchford, both prominent business owners, by charging his personal travel and clothing expenses to their bank accounts and forging checks in their names

Within months of being hired by the Pitchfords, Martin began charging personal expenses to the couple’s American Express business account in early 2015, according to court documents.

Randy is the CEO and president of the video-game development company Gearbox Software, and his wife Kristy owns and operates restaurant and coffee shop Nerdvana Frisco.

The court filings indicate the purchases made from their account included designer clothes – to which Martin had a self-admitted addiction – as well as jewelry, electronics, hotel stays, bar tabs, airplane tickets and Amazon movie rentals.

That same year Martin bought a $591,000 mansion in a ritzy Frisco neighborhood, although its unclear where he got the money for that purchase.

Randy Pitchford told the Dallas Morning News Martin quickly got ‘better and better at finding ways of spending our money’ as time went on.

However, it wasn’t until Martin resigned in 2016 to start his own interior design firm that the couple noticed a considerable chunk of their wealth was missing when they were unable to make payroll. 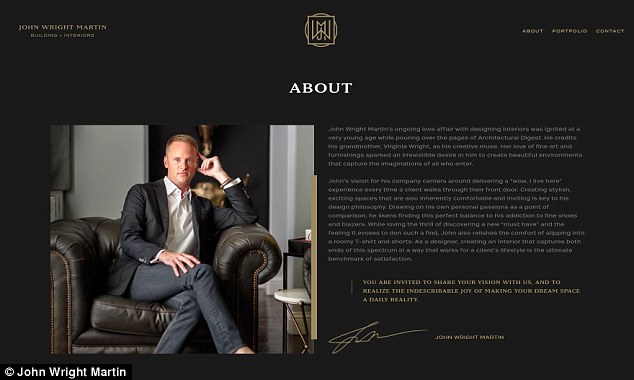 An article in this week’s Dallas Morning News describes how Martin, a self-described interior designer, managed to fill his closet with pricey designer labels, drive luxury cars and jet off on impressive international vacations despite only earning $45,000 per year as an assistant 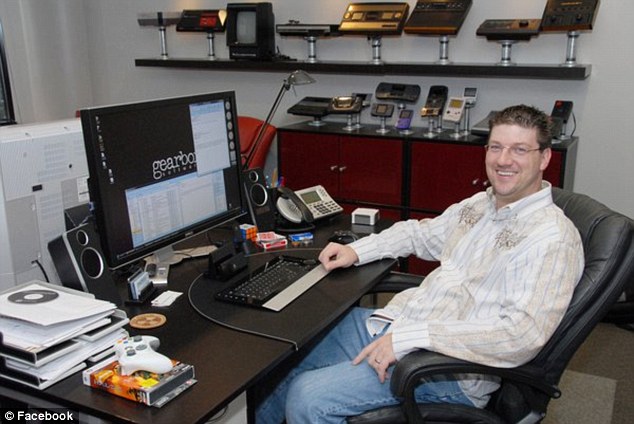 Randy, founder of a tech company, and Kristy, a restaurant owner, noticed troubling activity in their bank accounts after Martin stopped working for them in September 2016

Kathy confronted the former employee, who immediately apologized and told her there was a mixup with his accounts.

She said Martin ‘promised to make it right’, but then kept stalling.

Investigators would later find that Martin forged Kristy’s name on at least seven checks totaling more than $73,000, written out to him and one of his artist friends.

The friend told police those checks were for pieces of artwork he had designed, but has yet to provide documentation and has stopped communicating with detectives.

Martin also allegedly used the Pitchfords’ money to donate some $60,000 to charity groups The Trevor Project and Best Buddies International.

In March 2017, the couple’s attorney drew up a six-page agreement in which Martin ‘acknowledged the wrongfulness of his actions’ and promised to repay $780,000-worth of missing funds.

‘In hindsight, I wish that’s all it was,’ Randy said, adding that he believes the total loss is somewhere around $3million. ‘We keep finding stuff.’

That month Martin wrote a check for $598,000 to the Pitchfords – but it bounced. 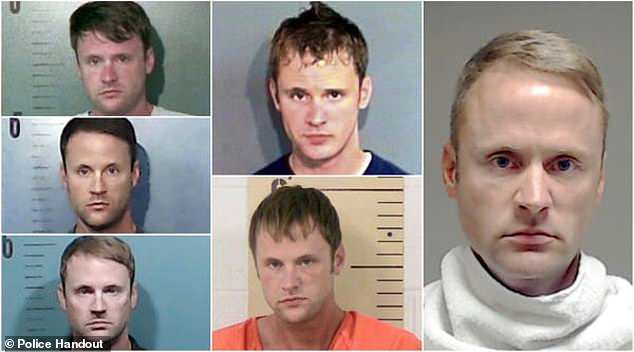 Martin has a long history of brushes with law enforcement dating back as far as 2006, with charges including disorderly conduct, issuing a bad check and three DUIs

Martin’s friend Matthew Worthen said he tried to help him get back on his feet by loaning him money along with a 2015 BMW 4 coupe – which Martin was then responsible for making payments on.

Months later Worthen says a debt collector called to inform him that the car was being repossessed because Martin had failed to make those payments.

When Worthen asked about the payments, Martin wrote him a check – which bounced.

Looking back at the situation a year and a half on, Worthen said: ‘I’ve wasted so much time on an idiot.

‘He’s a master manipulator – a con artist. He just destroys everything around him.’

Worthen believes Martin – who owes him some $10,000 – did the same to others, who are too embarrassed to admit they fell prey to the charade.

Worthen and the Pitchfords have both said they don’t expect to get any of the money they’ve lost to Martin back.

However, they hope justice will be served.

‘As much damage as he did, he didn’t destroy us,’ Randy said before asking who Martin might ‘destroy next’ while he’s on the run. 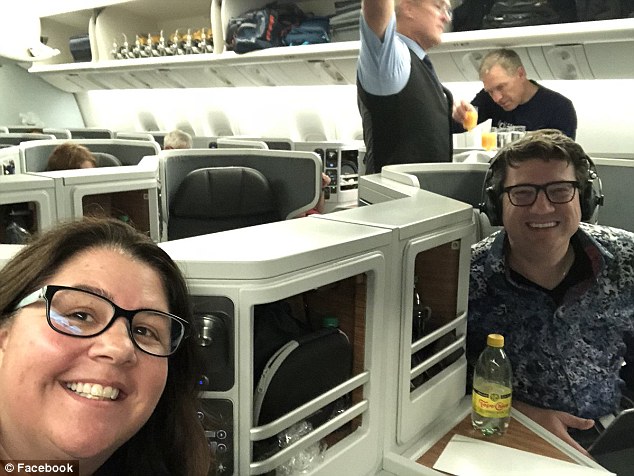 The Pitchfords say they don’t expect to be repaid any of the millions Martin allegedly stole from them, but hope he is unable to prey on anyone else the way he has them

According to the Dallas Morning News, Martin has been in and out of jail on several occasions in the last decade, dating back to when he was a student at Texas A&M University.

Charges against him reportedly include three DUIs, purchasing alcohol for a minor, disorderly conduct and issuing a bad check.

He received his first felony conviction last summer following the third DUI offense, and was subsequently sentenced to probation.

Amid theft and forgery charges related to the alleged Pitchford embezzlement, prosecutors sought to have Martin’s probation revoked in July of this year. 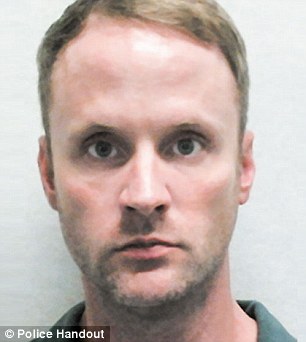 Authorities are currently searching for Martin, who failed to appear in court on theft and forgery charges related to the Pitchford case last month

He was taken into custody in Abilene and was transferred to Collin County jail, where he was released on bond.

Days later, the bail bond company he had used reported that Martin had not checked in as promised.

He was scheduled to appear in court on August 28 but did not show, so a judge issued another warrant for his arrest.

Martin’s lawyers maintain that he is innocent of the embezzlement charges, and declined to indicate when they last heard from him.

The Dallas Morning News claimed that Martin responded to a ‘recent request for an interview’ through Facebook, writing: ‘I can assure you there is much more to this story than me being charged for crimes I did not commit. I would like to finally tell my side of the story in hopes of putting a stop to this happening to anyone else in the future.’

The outlet has not been able to gain an interview as of this week.

Authorities have launched a manhunt for Martin, who could face life in prison if convicted.