A professional athlete has revealed how he felt the moment he realised ‘half his face was hanging off’ after a leisurely ride to the shops to a devastating twist – because he claims a woman ‘failed to give way to him at a roundabout’.

Bryce McMaster, 26, from Perth in Western Australia was travelling at 60 kilometres an hour and claims he had ‘no chance of stopping’ on Tuesday morning when he alleges a woman driving a silver car suddenly pulled out in front of him.

The effect was devastating – he smashed face-first through the back passenger window before being tossed on top of the car and landing face-down on the road.

Bryce McMaster, 26, pictured in hospital, had ‘half of his face ripped off’ in a horror bicycle accident 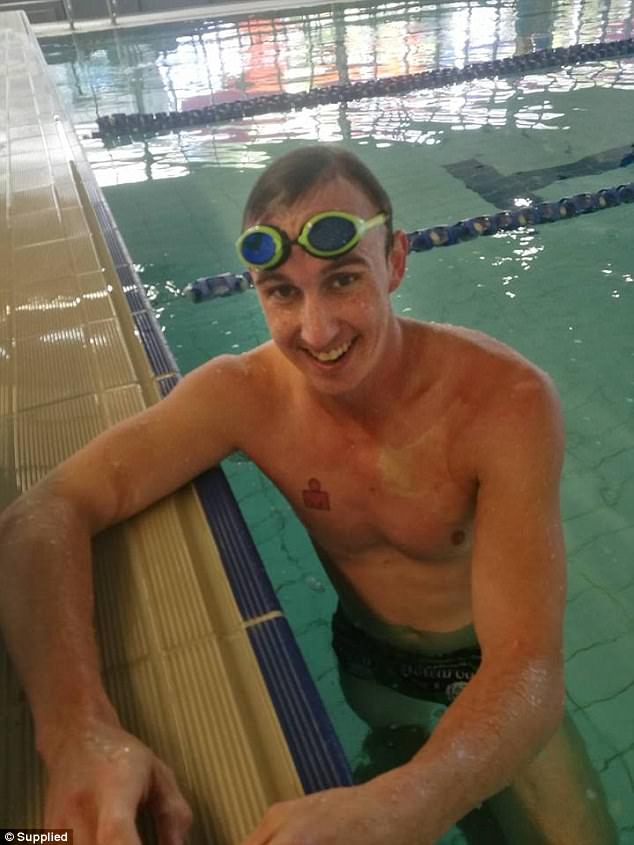 The professional athlete, pictured before the accident, will miss out on at least six weeks of training which could push back his entire season 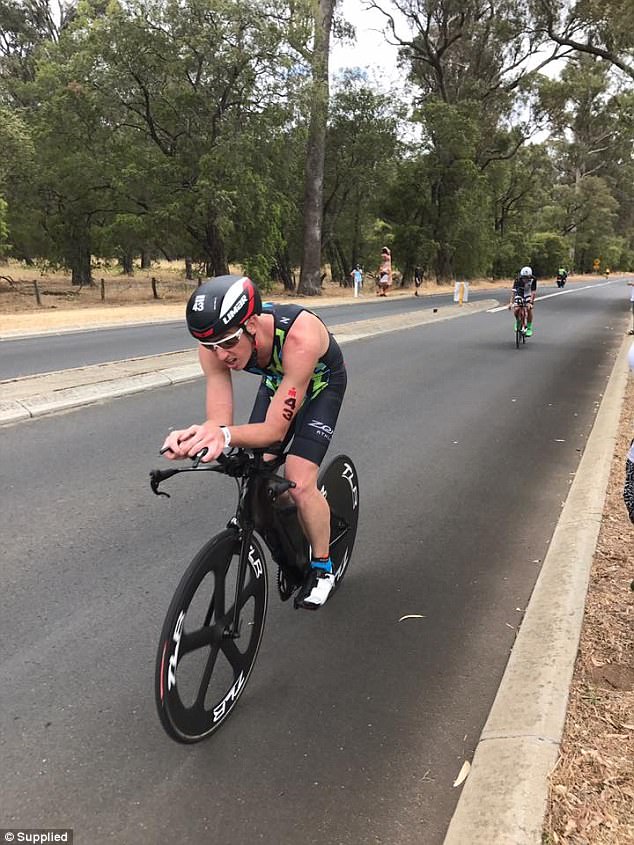 ‘I don’t think she realised how fast I was going, so she didn’t bother to give way,’ he told Daily Mail Australia.

‘I was out of my saddle so I could pick up some speed, the road was clear then next thing I know there was a car in front of me and I went face-first through the back passenger window.’

‘When I got up I could see half of my face was hanging off,’ he said.

‘I was shaking and I could see the skin flapping in the corner of my eye, the lady was a nurse and had bandages, I grabbed some of the gauze and just pushed it back so I didn’t have to see it,’ he said.

Mr McMaster claimed the woman screamed at him blaming him for ‘riding too fast’ before assisting him with bandages from her car.

‘I stayed conscious through the whole ordeal,’ he said. ‘There was so much blood, I was in shock and the pain was excruciating.’

An ambulance raced him to hospital where doctors worked to stop the bleeding, remove glass from his shredded face and tried to put him back together.

‘They had to take skin from my hip and attach it to my face,’ he said.

‘I have 62 stitches in my face and another 30 holding the muscle together. 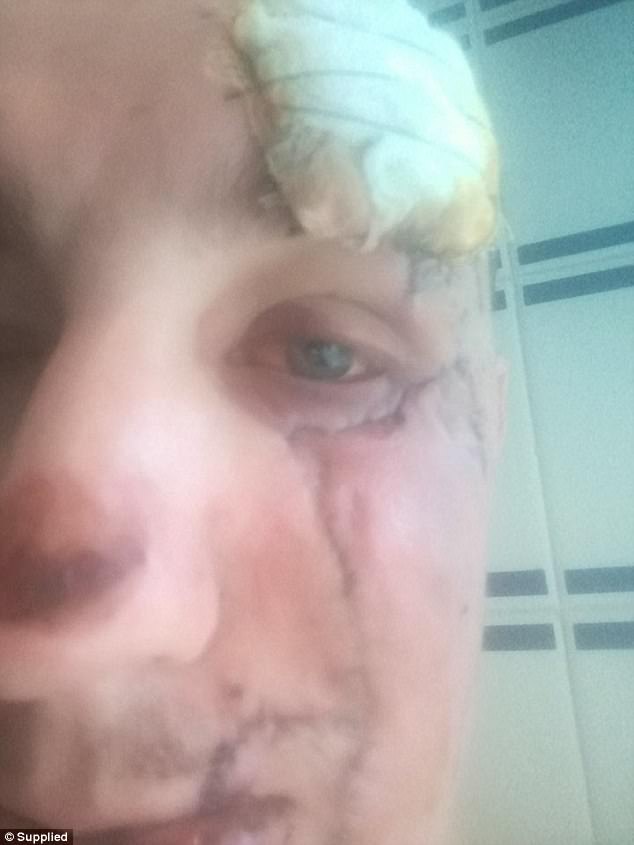 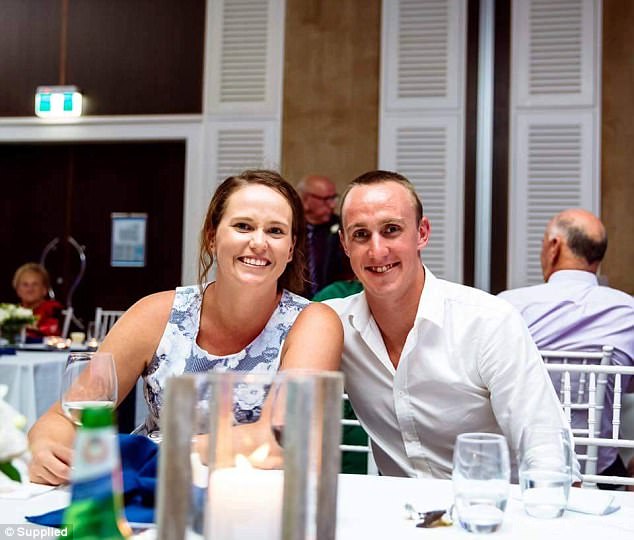 MrMcMaster with his girlfriend Cian Eckford, who ‘burst into tears’, when she saw him 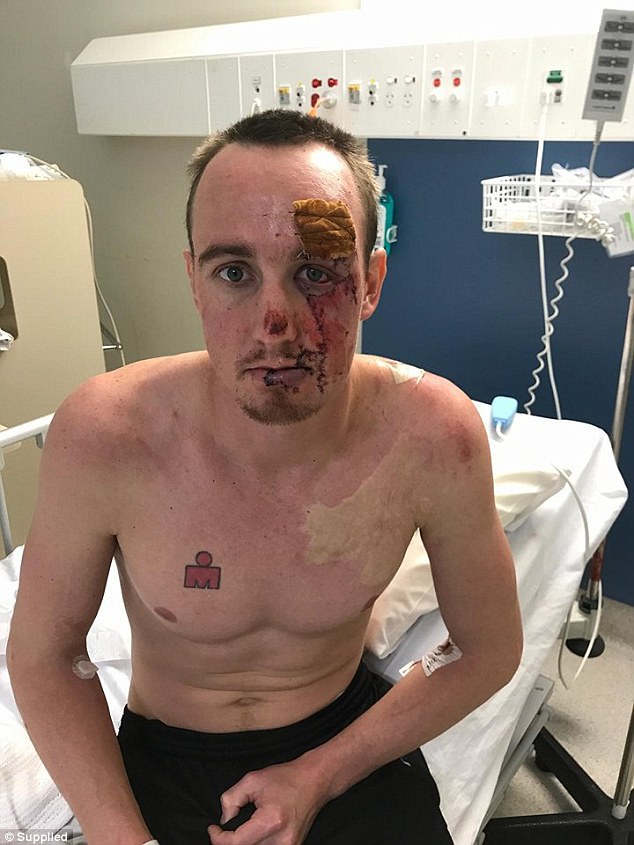 ‘And I had to have surgery on my eye to stop it from leaking blood.’

He was in surgery for five hours. The devastating news of the potentially deadly accident didn’t take long to reach his family.

‘My girlfriend just broke down into tears when she saw me,’ he said.

‘And my mum and dad were just in shock.’

His sister, Keryn McMaster, an Olympian who represented Australia in the pool in Rio, called him crying after she heard about his horrific smash.

‘That was pretty intense because she doesn’t show a lot of emotion,’ he said.

She hasn’t been able to visit him though – because she is in strict preparations for the Commonwealth Games. ‘

‘I can understand that better than anyone,’ he said, revealing how this setback could harm his career over the next two years. 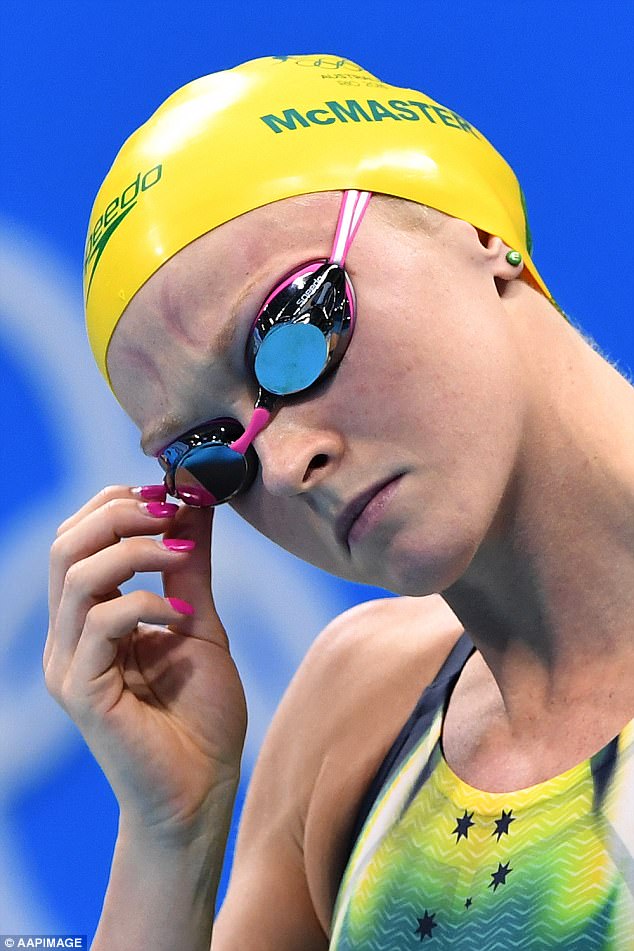 His sister, Keryn McMaster, pictured, an Olympian who represented Australia in the pool in Rio, called him crying after she heard about his horrific smash 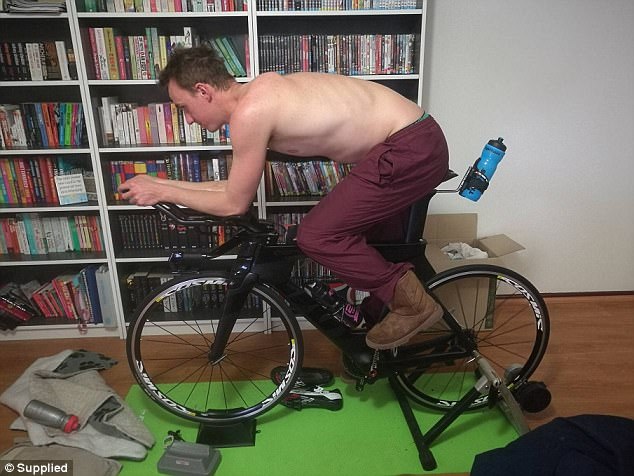 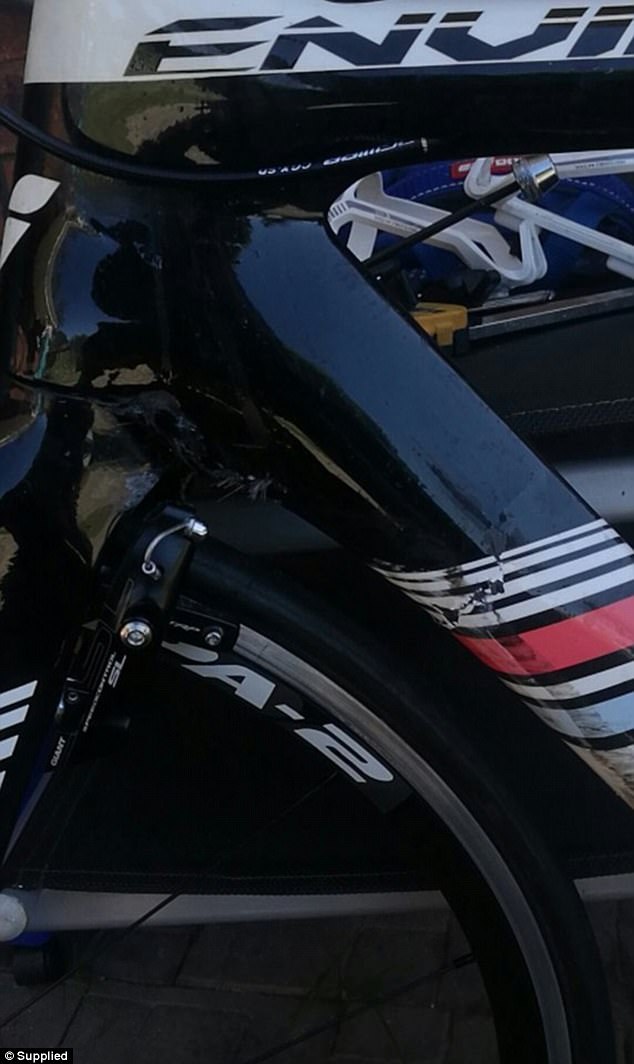 Damage to the bike caused during the accident – the bike is worth $5,500

‘I was supposed to be racing on the Sunshine Coast in two weeks and was working towards the Hawaii Iron Man.

‘I have to take six weeks off so there is no chance I will make that now, six weeks off means I miss out on my planned summer season.

‘My coach is going to figure out a contingency plan once we have figured out what the recovery is going to be.’

Mr McMaster has to keep a wet cloth over his torn face ‘all day every day’ to keep the skin graft moist so it doesn’t tear.

He is on antibiotics, anti-inflammatories and heavy pain killers – and off any physical movement which could cause him to sweat – because that could ruin his fresh wounds.

‘My eye is still leaking a lot of blood so I have to wash that out a lot and on top of that I have a cream I need to use to keep the scarring down,’ he said. 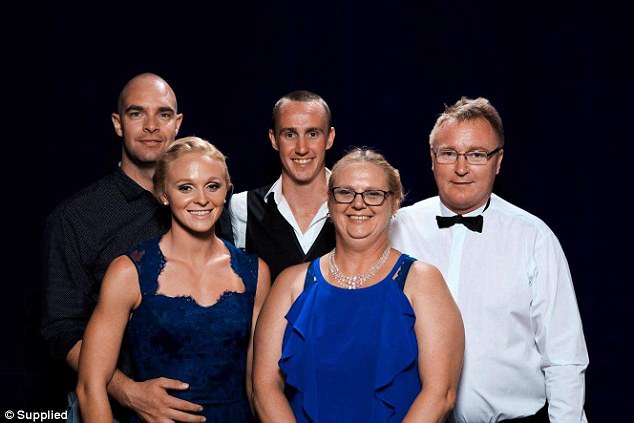 Mr McMaster, back centre with his family, his Olympian sister Keryn McMaster is pictured left in front of her partner Jack Clark and their parents Jane and Steve McMaster 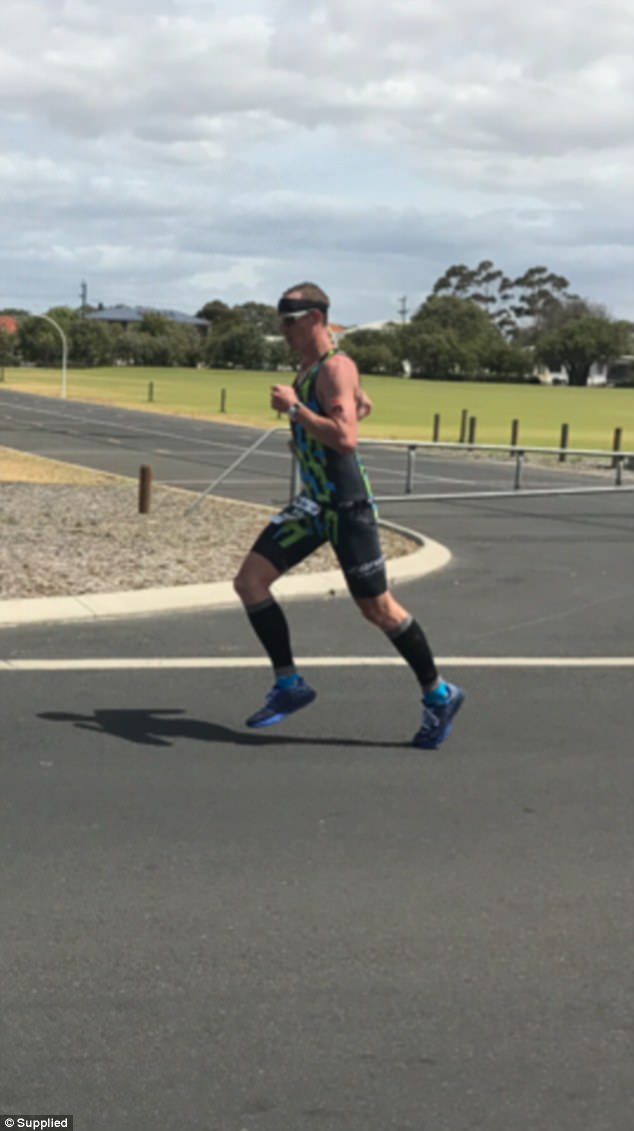 The triathlete has been on the professional circuit since he was 18, but was riding bikes ‘pretty seriously’ for four years before that 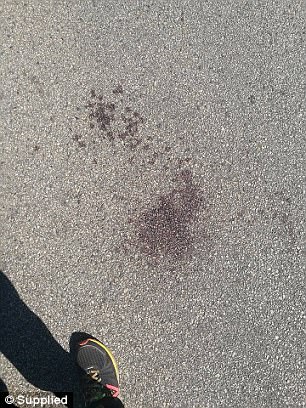 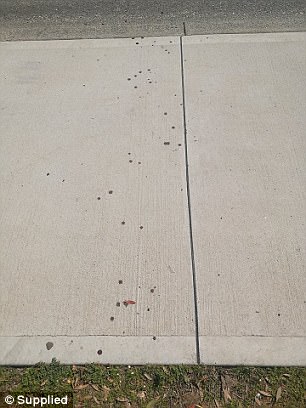 The triathlete has been on the professional circuit since he was 18, but was riding bikes ‘pretty seriously’ for four years before that.

‘I know how to ride on the road – I just want people to know they need to keep a look out for us – that they can’t pull out in front of us because we are going faster than they think.

‘When you are in a car you are pretty safe, you have a whole metal case around you – but on a bike there is nothing. My bike weighs ten kilograms and I’m less than 80.

‘I am just so luck to be alive because it could have been a lot worse.’

He has described the career-loss and financial aspects of the crash as ‘gut wrenching’.

‘Because there were no witnesses it looks like we will each have to pay our own way, so that is a $5,500 training bike to start.

‘Not to mention sponsorship – I will miss the next race and races after that are going to be pushed back and sponsors don’t like that because it means I can’t get their name out there.’

Mr McMaster was released from hospital on Friday, into the care of his aunt and his partner. He suffered three facial fractures as well as a shoulder fracture.

He has chosen to spoke out just hours after five cyclists were taken to hospital in Brisbane, after a car collided with their group. 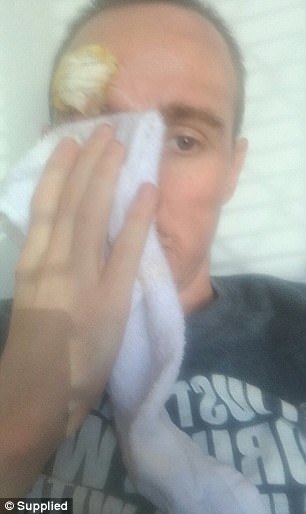 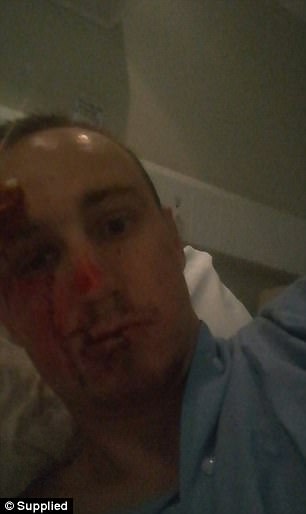