Police endured a gruelling period of call-outs after a series of violent crimes rocked Perth over the weekend.

The city’s inner suburbs have suffered a turbulent 15-hour period of violence, including a suspected murder, shooting, stabbing, and a suspicious death.

The string of violent incidents kicked off early Saturday with the death of a 46-year-old man who was found unresponsive in his Atwell home.

Perth, and the city’s inner suburbs, endured a turbulent 15-hour period of violent crimes over the weekend

Police believe the victim may have been involved in an altercation earlier near Narrows Bridge in South Perth, somewhere between the bridge and the intersection of Mill Point Road and Harper Terrace.

He was taken to Fiona Stanley Hospital around 4.30am where he later died.

Hours later, in a separate incident, another man was shot in the leg on Parker Street, South Perth, in what police believe was a targeted attack.

The man was driven to Royal Perth Hospital about 6am on Saturday with the non-life-threatening gunshot wound.

‘At this time the incident is not believed to be a random incident,’ WA Police said in a statement.

In Beaconsfield, about 20km south of the city’s CBD, a 39-year-old man was also stabbed in throat at his own home. 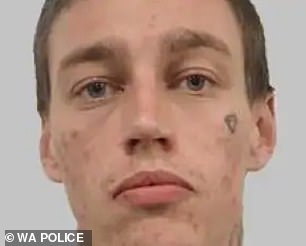 Police are looking to question Jarrad William Nash, 23, after stabbing in Beaconsfield

The suspect was reported to have arrived at the house around 9pm looking to speak to a woman.

After he was asked to leave, the knifeman became violent and slashed the man’s throat.

The victim was taken to the hospital where he underwent surgery on Sunday.

Police are now looking to question 23-year-old Jarrad William Nash over the incident and have warned members of the public to not approach him.

Nash is believed to be armed and dangerous and has links to a bikie gang, the West Australian reported.

Police have also launched a murder investigation after a woman was found dead in her home in another incident hours later on Saturday afternoon.

The victim was discovered in Balcatta after a man in his 20s walked into Mirrabooka police station at 12.15pm with information on her death.

The man was arrested and remains in custody.