A pet owner has turned pictures of her eight adorable dogs into a sell-out calendar after being inundated with requests on social media from people around the world. Kaylee Garrick, 29, often snaps her seven Shetland Sheepdogs and one Alakan Klee Kai wearing wellies and sunglasses near her home in Shetland, Scotland. Scroll through to see more pics… 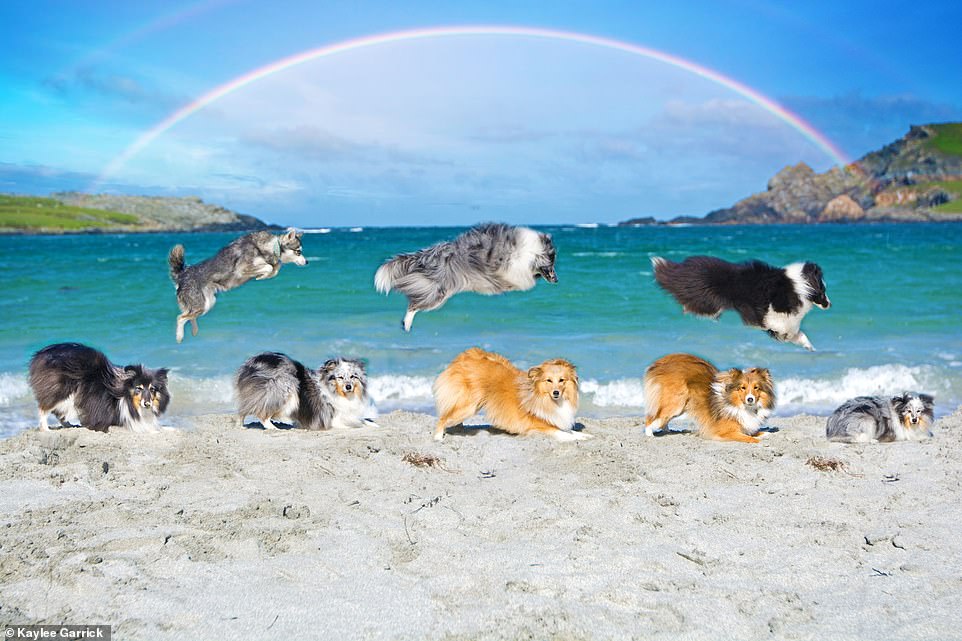 Rainbow bow-wows! Kaylee’s dogs are pictured leaping in the air on a pristine beach in Scalloway, Scotland. 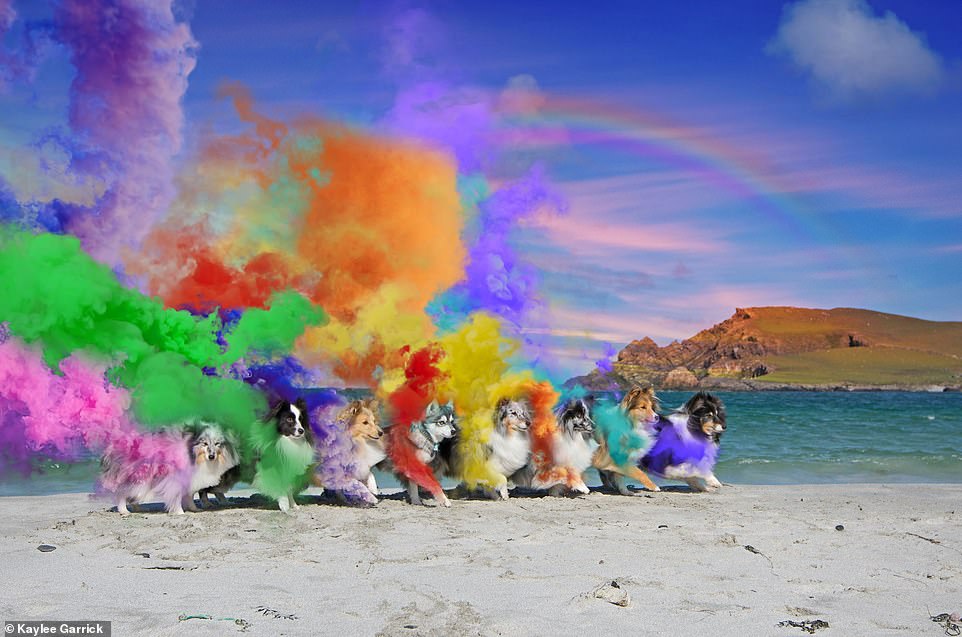 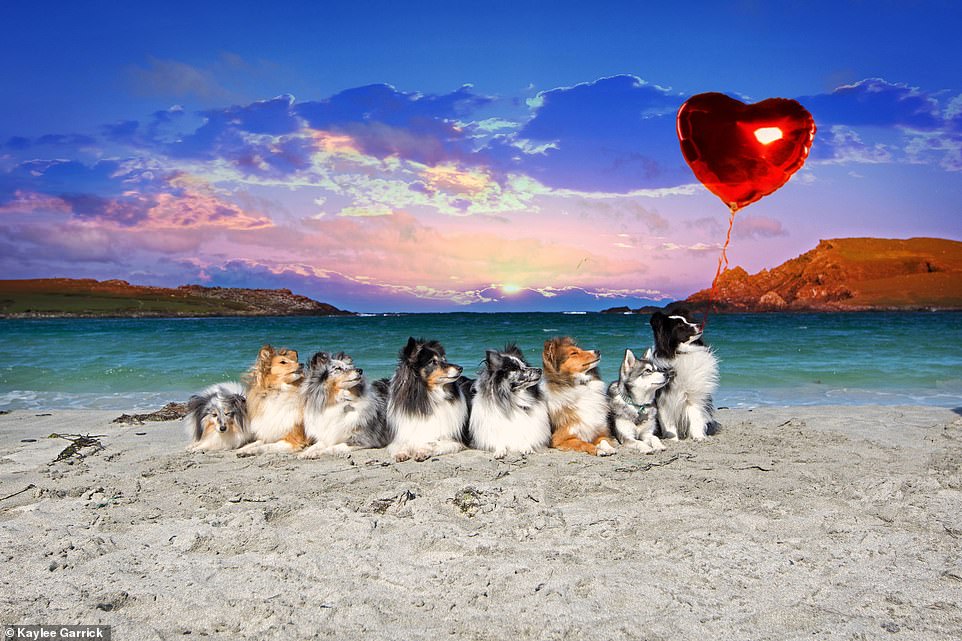 Man’s best friend: The dogs are seen gazing up at a love heart balloon, which would likely be the photo used for the month of February when Valentine’s Day falls. 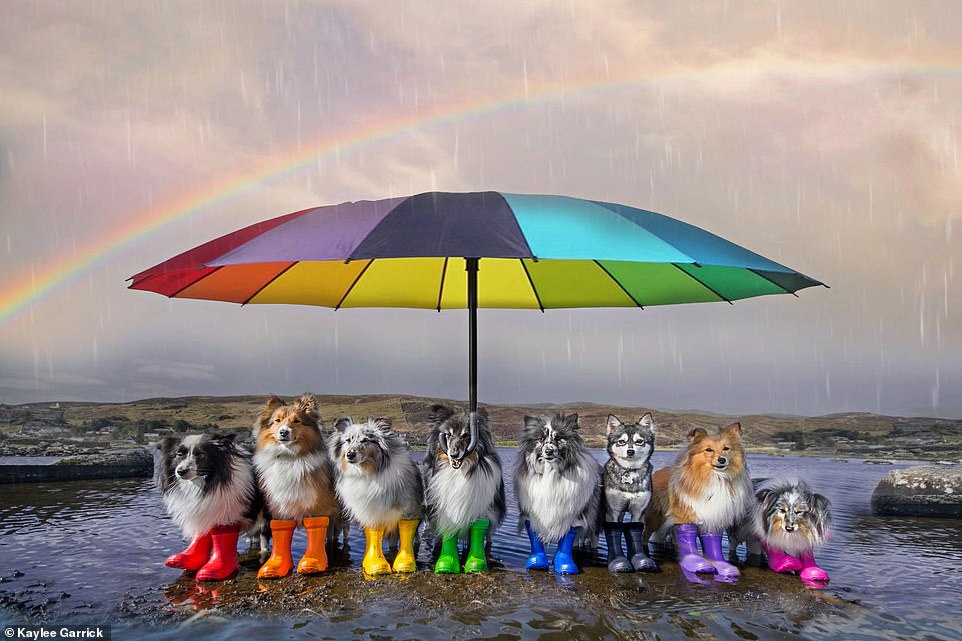 April showers? Another cute snap of the dogs dressed up in wellies – or at least made to look like they are wearing them… 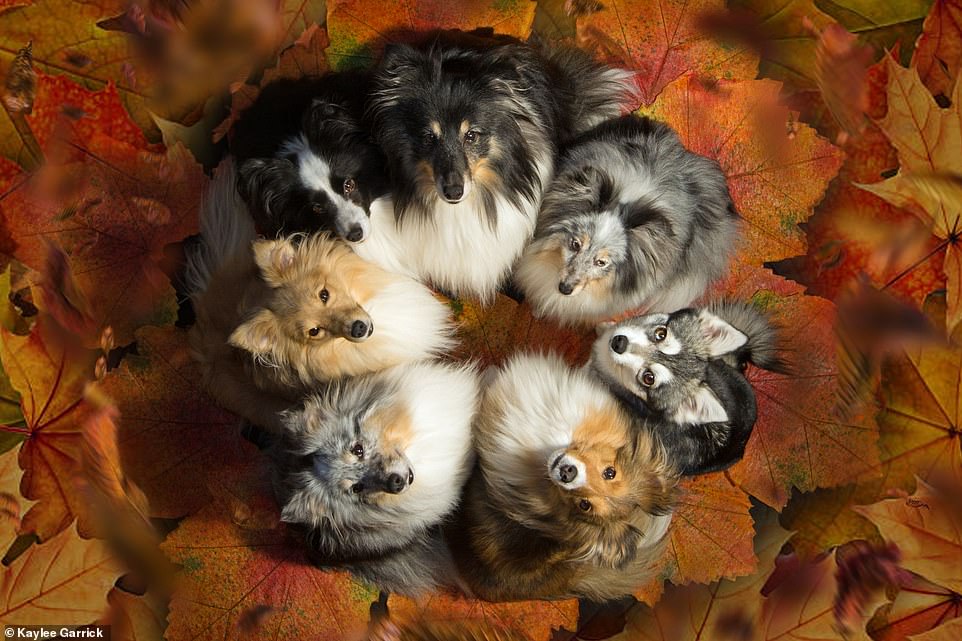 The calendar also has a seasonal theme. The dogs adorably look up at the camera while sitting on leaves to give the photo an autumnal feel. 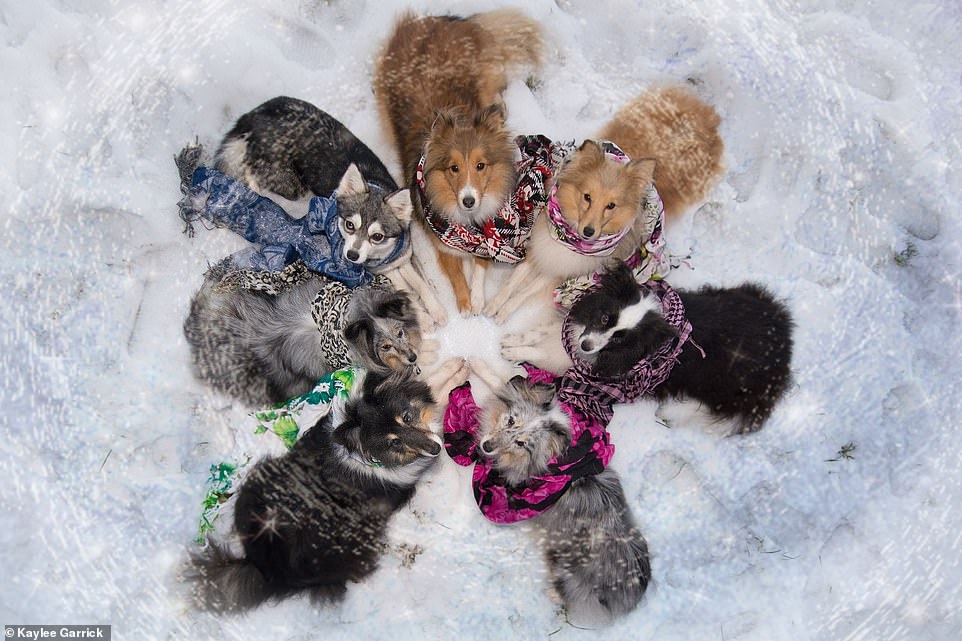 Winter pups: The dogs are pictured in ‘doggie jumpers’ as they look up at the camera in a snap to depict the winter months. 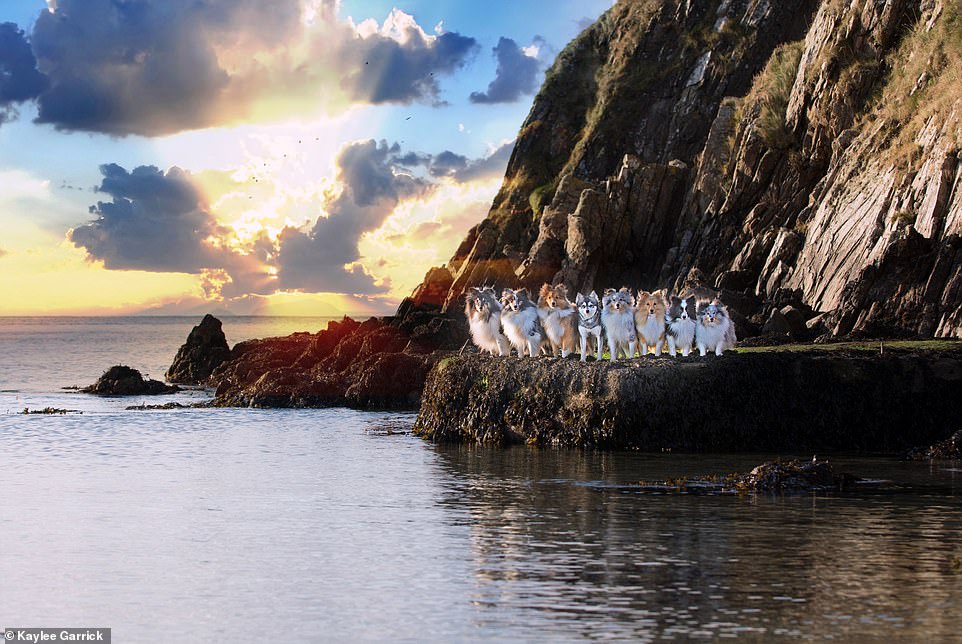 On the rocks: The calendar features photos of the cuddly pooches alongside a Shetland word of the month, so people from around the world can learn a little bit of the old norse language. 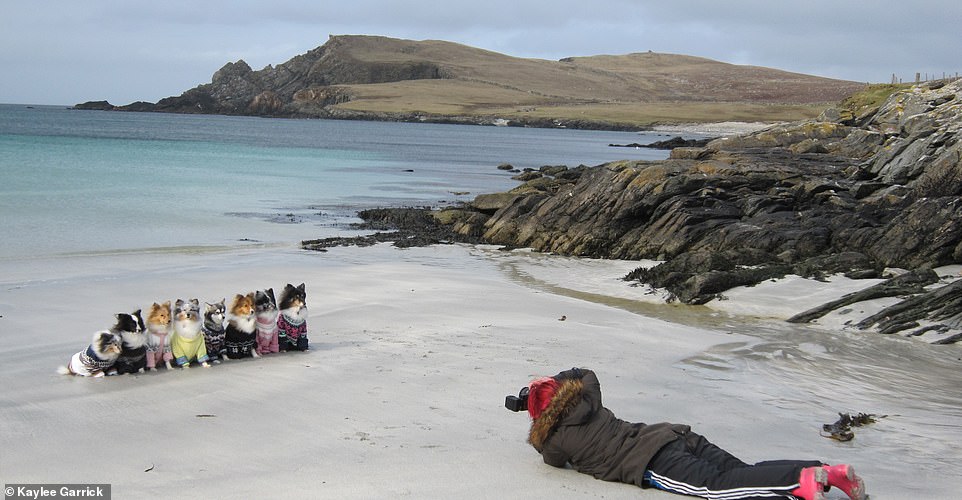 Behind the scenes: Kaylee manages to get her pooches to stay still while taking their photos – but she has to lie down on her front to get the perfect snap. ‘If it’s got rainbows, makes you laugh and has seven or eight dogs in it, you can pretty much guarantee that’s one of my photos,’ she said. 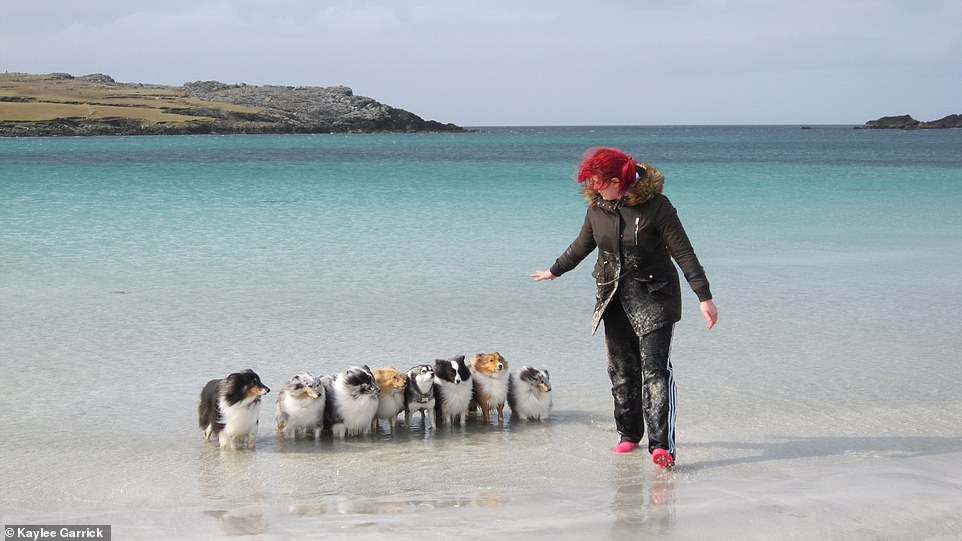 Kaylee is pictured getting her well-behaved dogs to stay in position in the sea before taking their photo for the calendar. She has donated the money she received from the calendars to charities supporting ambulance staff and dogs for war veterans. 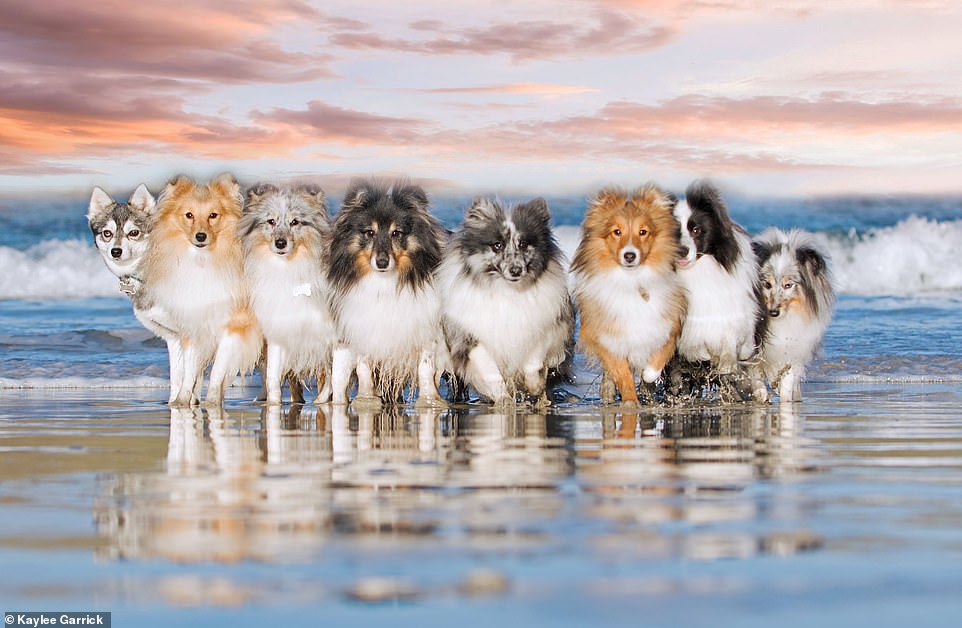 Social media stars: Kaylee said people had got in touch from ‘the USA, Canada, Finland, Sweden, Norway, Germany, France, Australia and New Zealand to mention a few places’ asking about the photos. ‘The response has been overwhelming, I could easily have sold double,’ she said. 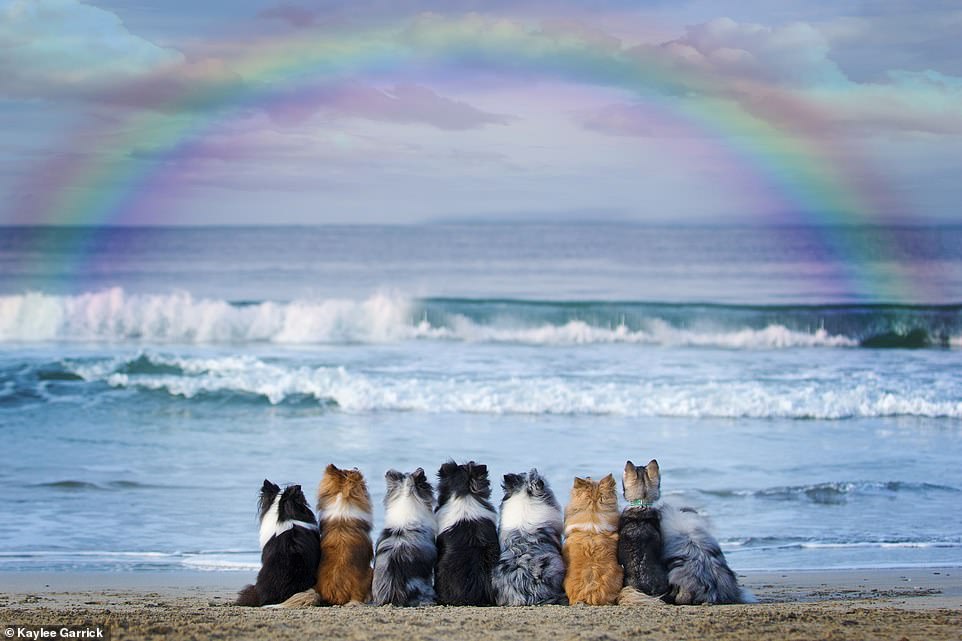 A well earned rest: The eight pooches are pictured together as they wrap up their photo shoot.